We had Bella visiting for a couple days last week and so it was really a zoo for sure here at the Moby! 3 dogs, 3 cats, a guinea pig, 2 ferrets and 2 gerbils! Of course, it was hardly Bella’s fault for pushing us over the edge, we were already hanging on the side of the pet cliff for a good long time.

At first it was chaos, because Evee thought we bought her a new wind up toy and was basically chasing Bella ALL OVER THE PLACE for an hour! A 5 month old herd dog pup is relentless with the focus and drive thing. Poor Bella! We kept snatching her up and trying to keep the two apart a bit… Evee is like a bull moose in a china shop!! She’s at the very very gangly yet powerful puppy teen stage and just doesn’t know her own strength.

So Jessy came to the rescue and she began to get everyone involved in some fun and games with homemade tuna cookies. Pretty quickly, she had the whole canine crew performing tricks and waiting patiently for their turn to wow the judges. 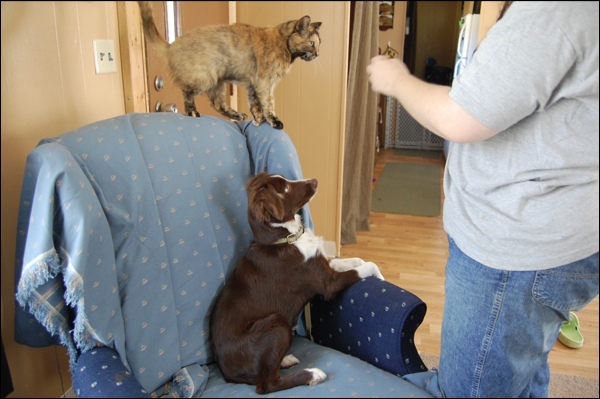 Of course, where tuna cookies are involved, the kitties had to get into the act and Dixie found a good spot on the back of my old wingback chair to do her little litany of tricks! Evee was very intent on learning a few more. She’s definitely the attention queen when it comes to learning new tricks and performing for the masses.

I can’t get over how much she’s grown in just 3 short months! She’s all elbows and long legs and rough and tumble all in one. We’re trying hard to teach her to be a little more graceful, but she’s just all powerhouse and clumsy pup in one! She rips around the Moby like greased lightening and can jump like a gazelle! She can clear the chair’s arm in a single bound and be sitting in it in a heart beat!

She is SOOOO hard to catch when she gets loose, she runs and darts and thinks that we’re just playing with her… silly goose. Maggie figgered out how to catch her though, today, it was so funny. We had spent about 5 minutes on a silly pup chase, trying hard not to “chase” her but get her interested in coming close enough to grab… when Maggie went back to the yard and scooped up Jack from his napping spot on my car! And she walked right over and said, Look at the Kitty! And Evee ran over instantly to get a good sniff of Jack in her arms! She and Jack are not friends and Jack was less than pleased to be used in that manner. Good thing for Maggie, he doesn’t have front claws! (We didn’t do that to him, he was abandoned that way…)

Well, just think… Evee was just a teeny pup not that long ago! Here she was in the middle of May! Awwwww…… 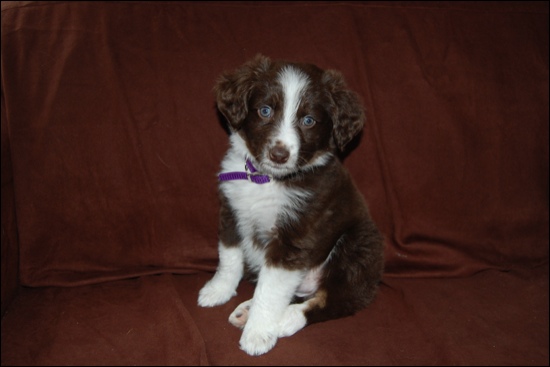