I’ve been reading online about felting sweaters. And after seeing some of the most adorable little critters and pouches and such at the Bluegrass Festival on the island, I thought it was time to give it a try ourselves.

Well, just as luck would have it, Maggie and I were driving home from the post office run and there was a garage sale! So we stopped. I had no problem scoring two nice neutral colored men’s sweaters for my evil plans. One was cotton and the other was merino wool.

Or course, when I got home and consulted the old Web Oracle… I discovered that cotton ones don’t felt. Durn. But one site did suggest that you cut cotton ones up and sew them into things, like pouches and little bags or what have you, so I thought, cool… no problem. I’ll cut that one up and make a few things.

But the merino wool? Perfect!!!

First thing you do is cut off all the seams. Cut off the waistband, and the collar and the cuffs. And then cut up the side seams and all that. If you don’t, it might not felt as nicely as it should. 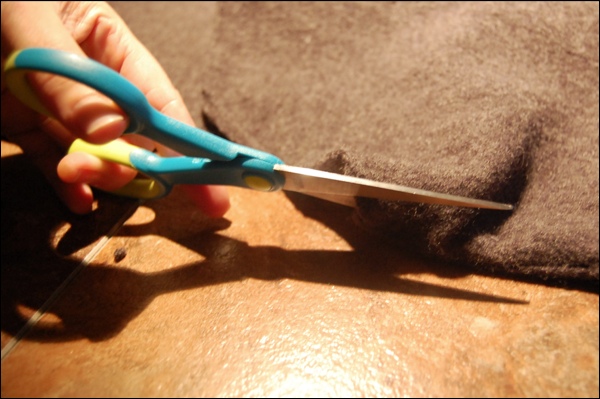 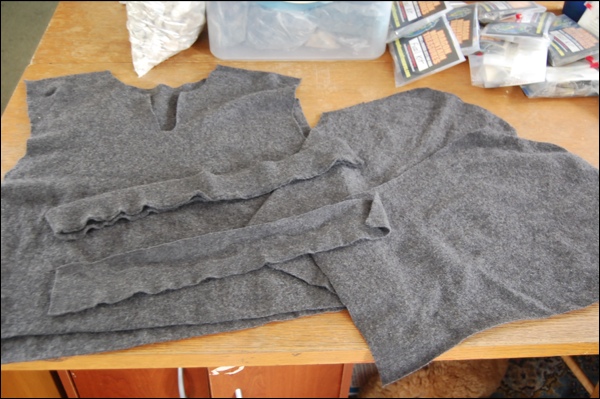 Then you pop the pieces into a hot pot of boiling water!!! Of course, you can do it in a washing machine, but well, we don’t have one, and I didn’t want to go to the laundry just for a craft. So, into the hot pot they went. After all it IS called boiled felt! I just did one clump at a time. Didn’t want to overload the pot.

Boiled about 10 minutes and then pulled it out to drip and cool in the sink. Once I could handle it, I wrung out each piece with my hands.

They did shrink up, about 30% or so. Not quite the 75% that can happen, but to be honest, the thing looked a little felted before I actually even cut it up. That happens a lot… we all have probably felted a wool sweater before without even trying!

But in the end, I got some nice pieces of felt… once they dried! I think I’ll try and make some cute little Ipod and cell phone pouches with it and maybe even a few kitty catnip mousies!

However, with the cotton sweater pieces I began sewing. And let me tell you, it was a minor disaster!!! Apparently cotton sweater is very hard to sew on until you use a binding tape!!! Which I didn’t. So they got all wobbly and stitched funny until I managed to develop a little skill at it. 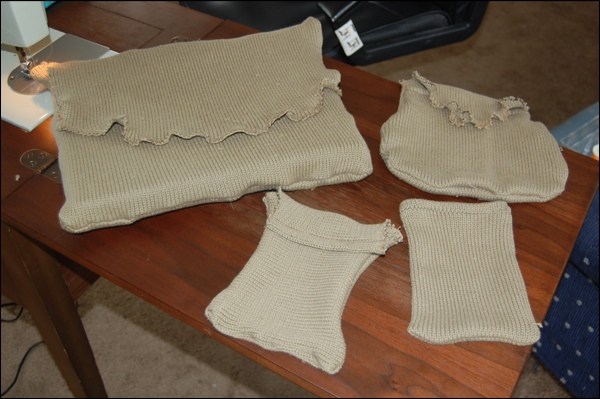 Actually the wobbly seams were kind of attractive on the edge of a flap or something, but dreadful to try and make nice neat seams. But, hey, they actually turned out kind of cute. I think I’ll add a few little embellishments and maybe some little shoulder straps to a few and see how they fare. I have a little stash of bits and ribbons and such, that might really dress it up a bit.

I made Jessy a nice laptop sleeve! It’s so nice and soft. Of course, it won’t protect it from much, but it’s kind of cute anyway! Not bad for $2 worth of garage sale sweaters! Can’t wait to play with the felted dark gray sweater! Maybe next weekend!