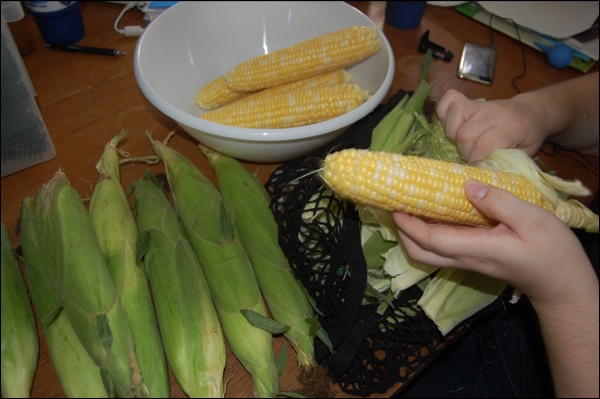 Oh the sweet corn in our local farm stands has been so wonderful. I could eat it every day! And I got the idea of getting some of it ready for the freezer… so we could have it through the fall and winter, maybe… if it lasts long enough!!! (haha)

So we got an extra dozen and are giving it a try! 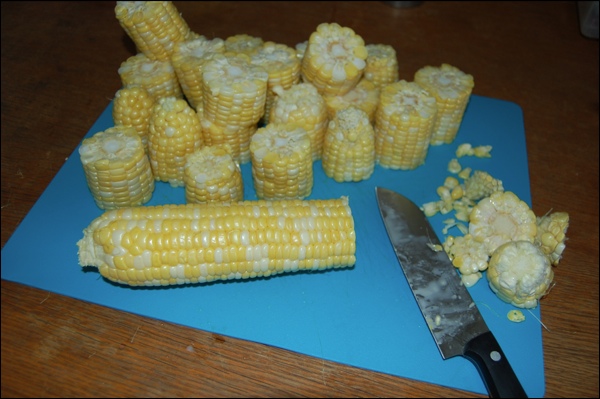 I cut our corn into chunks, like small nibblet corn. We don’t always want a bunch of corn at a meal, so this way we can have a little or have a lot. I like the idea of being able to pop a few in the crockpot too, if we’re having a roast or into a grill packet for BBQ time. 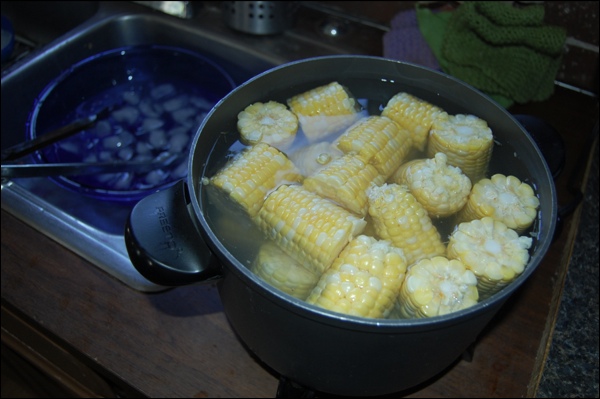 A quick 4 minute blanch into some boiling water and then straight into a bowl of ice water to stop the cooking. I suppose that you could skip the blanching step, but everything I’ve read seems to point to the corn getting kind of mushy and loosing some of that sweetness. It seemed easy enough to do, and it was.

Here’s a little trick though, if your corn water stops boiling when you put the corn in, you’re probably cooling the water too much. If it’s not boiling again by less than 1 minute, you need to use either a bigger pot or less corn at a time. Basically, you’re bringing the temperature of the water down toooo cold by adding the corn. Just a little trick.

It took Maggie and I less than an hour and we had enough corn bagged for 6 meals. It only cost us $2 for the corn, and 6 ziploc bags. Not too bad. And we’ve already dug into our store to give it a try and it was just as good as if we had just husked and boiled it! Granted, we only gave it two days in the freezer, but I suspect if it was going to be mushy, it would be mushy right away, pretty much.

I think that we’re going to try a much larger batch of corn and cut it from the cob. I think folks are right, the cobs do take up a lot of space in the freezer. And the idea of adding a little butter to the bag sounds easy to make quick corn in the microwave! Or just pop into a saucepan of boiling water and you’re ready to go!

Oh, our corn on the cobs only took about 5 minutes in boiling water to be perfect! Just add a little butter and some salt and you’ve got fresh picked local sweet corn goodness ready for your table in no time flat!

I can’t wait to see if our corn makes it to the harvest finish line! It tassled and we do have some ears… should be interesting!