Well Luna is feeling a little, well, evil of late.

She’s not that happy over the addition of another kitty to the ranch. She’s tolerant, but well, not pleased.

And then to top it off, it’s snowing and cold and she HATES snow and cold weather. Refuses to go outside for the most part and that is what she lives for. Going outside.

So she’s been a pretty much grinchy, grumbly, pointy toed unhappy kitty and Jack has been taking the brunt of her frustration.

So I decided to give her a little diversion… I put a little kitty weed in a box and showed her what was up and she was ready to have a ball. She was in the box in 24.5 seconds flat and was rolling and licking and slapping the lid and just having a ball. So I went back to my computer work, smug in the knowledge that I had brought a little bit of fun into kitty Luna’s life.

Well it wasn’t but a few minutes when I hear hissing and kitty fighting and little Nina has gotten in the mix!!! Sweet little orphaned Nina is apparently a real lioness when kitty nip is introduced to the mix and within a few moments, she had evicted Luna from the box. And Luna was not happy.

So I got Nina her own box and some more nip and she was happy… and Luna reclaimed her box.

Well… all was well in the kitty kingdom until Jack came in and decided that he wanted Luna’s box and apparently weed was worth fighting for, and he successfully ousted Luna, once again from her box! 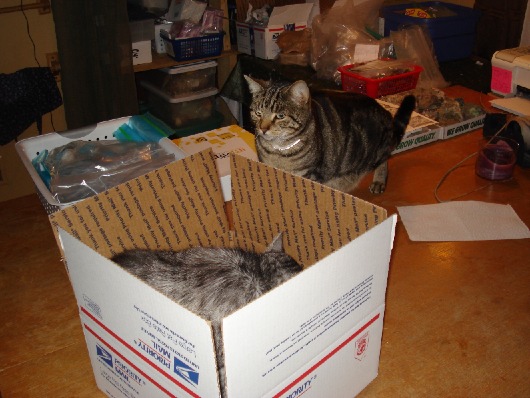 Which I found very amusing because in the past he was ALWAYS pawned by her and was generally reduced to a hissing scaredy-cat kitty when she was bullying him. Apparently, catnip makes the man, and he decided he wanted that box.

So I kicked him out, put nip in his box, and reinstalled Luna in her box like some South American puppet drug lord, and laughed as all three of them settled into their cardboard castles, watching the others with very menancing glares, as they protected their stinky weed box until they all fell asleep in a drug stupor the the rest of the afternoon.

Ah, the life of a Kitty in the Moby…. 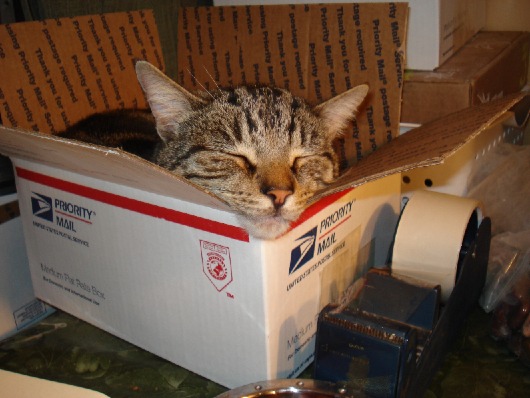