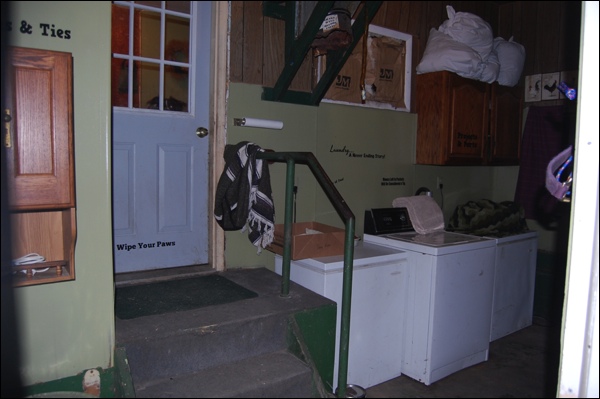 We finished up our major redo of the mud room!  Yah!

I wish I had a before picture…  just imagine a dark, murky place where everything on the farm gets cast aside.

Yeah, that was the mud room. 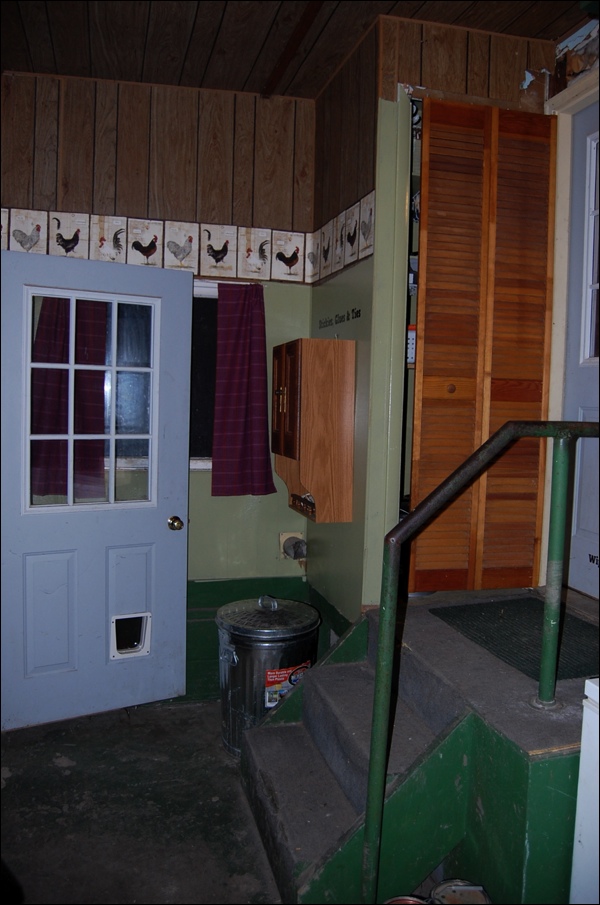 It was on the list for some special attention and we finally gave it some.  We emptied the whole thing out… and started to paint.

I only had about a half gallon of the paint that we used in the kitchen and I thought that might go okay with the existing dark green on the skirt wall and stairs… so we painted all around, about half the way up the wall to a nice breaking point.  And left the paneling up above, as it wasn’t too bad.

I had this rooster wall paper border that I got at a garage sale.  After all, one NEVER passes up rooster borders when they are 50 cents for a roll!  haha…. at least this rooster loving gal.  I wasn’t sure how much there was, but it was enough to go around three walls, so that was cool.

Miss Julia helped me with it, because I am ashamed to admit, I’ve never used a border before!!!  Now, I did stencil once, a great big deal with some cool wisteria vines and such, but never the wet and fold and squeegee type.  So I needed expert help!

Jr. installed this little kitty door that we have had FOREVER…  I think I actually bought it for the moby, but we had it in a box and it surfaced and I thought it would be perfect for the door that leads out of the mud room and into the screen porch.  That way we can close up that door and the kitties can still come into the mud room for food and warmth. 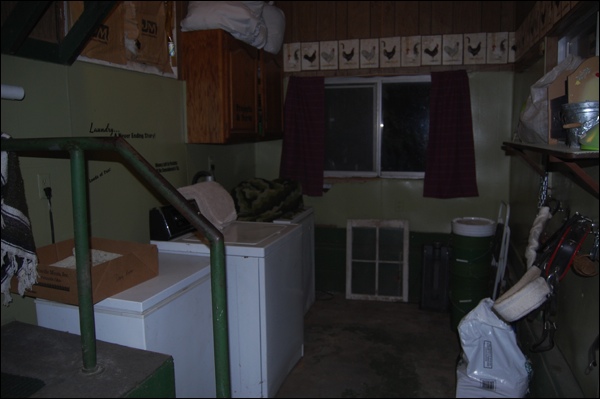 Cleaning out the clutter was more than half the battle.  And making sure we found a place for everything and all that jazz.  We sorted all the tools and what nots, and threw out a bunch of stuff.  We also trotted stuff like our miscellaneous wood collection out to the poultry barn where we have the official excess timber storage facility in place.  And we thought hard about where and how to sort the various groupings of things we had.

We decided we had… Paint.   Tools.   Hardware.  Project parts.  Cody Pony Harness stuff and grooming stuff.  Power tools.  That kind of things.  So we figured out places for things and then sorted it all really good and put it away. 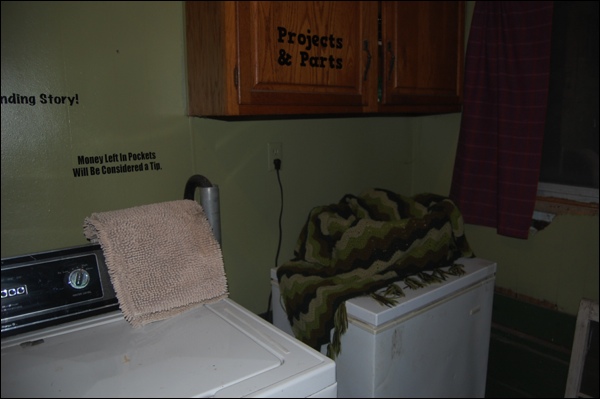 And then we made a couple of snuggly baskets and boxes for the kitties.  We have come to the conclusion that at least three of the four Windhaven kitties do not belong in the house very much.  Two of them… Baron and Duke, the kitty brothers, are not very good at proper litter box etiquette.  They can be little stinkers and think it’s okay to piddle various places other than the litter box.  This is not very acceptable.  And they are really more barn/farm cats.  They want to be outside most of the time.  Now they have a room they can hang out in and eat, sleep and stay warm if they want.  Luna is okay in the house, but she would rather be outside as well most of the time.  Only Dixie Chick is the total inside kitty.  Although, she really likes the mudroom now, especially that green afghan basket!!!  She slips out and goes to take a nap there in the afternoons! 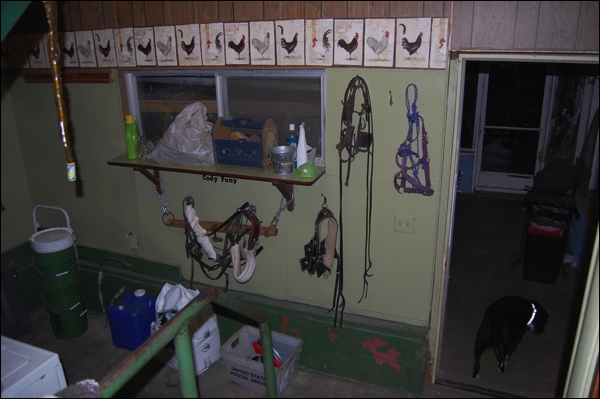 Cody has a WHOLE shelf devoted to all things pony.  His little Amish grooming box of tools is there as well as his fly spray and shampoo.  His little treat pail and hoof picks are there as well.  And on the wall, we hung various hooks and such for his harness, bridles, halters and reins.  It’s all pretty cool.  Now it has a PLACE! 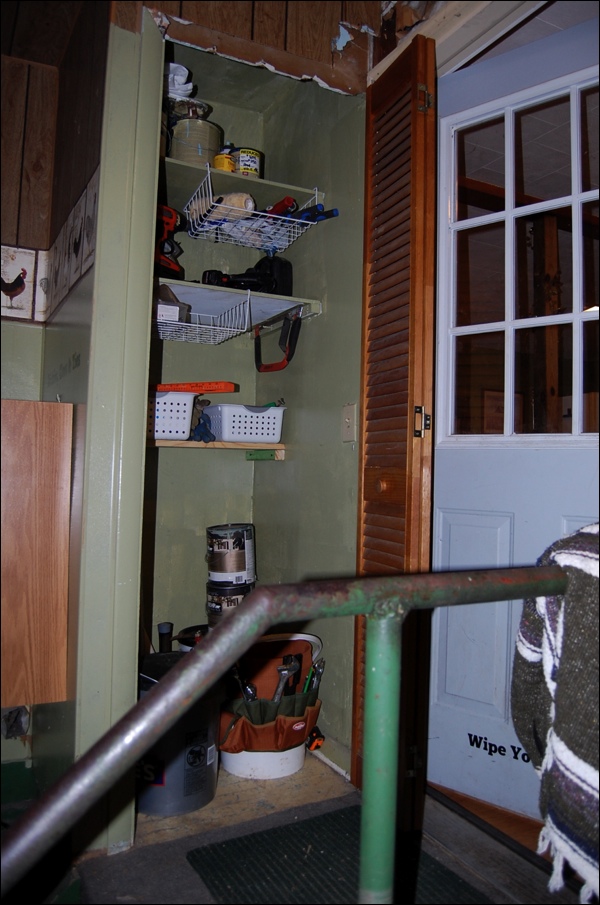 The little cupboard in there now is a place for paint, tools and hardware.  I found the cute little bi-fold door on a trash day.  Ah, yep,  free.  It was really nice!  I couldn’t help myself!  And it fits perfect!

We made one shelf all power tools.  Another shelf is paint and painting supplies.  I am happy to report that we are down to just about 4 or 5 gallons of weird paint.  We have been using the rest up!  Yeah!  No real reason to just hold on to it and let it get old and hard.  We’ve been painting out and around the farm, and stuff looks lovely!  More pictures to come! 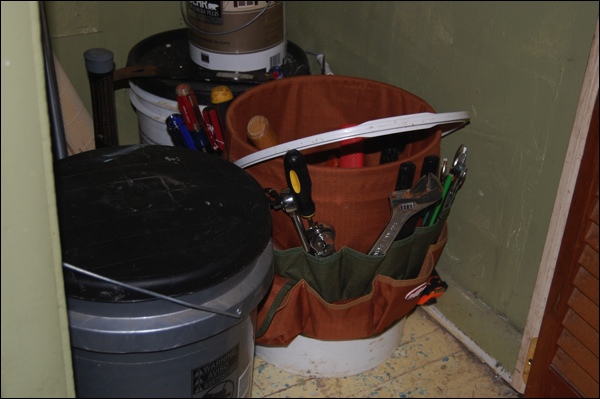 Last Christmas we got that handy little bucket buddy caddy tool thing and we’ve tried to use it and didn’t have a lot of luck.  I think it was partially because we never really gathered everything up and made it find a home.  So we did.  All the tools, they are now in the caddy.  And we have another 5 gallon pail that is all hooks, nails, screws and hardware bits.  We plan to hang a few more hooks in there to hold some tools like sledge hammers and hand saws that we really don’t need in the bucket since they are not as commonly used.  But we want them all stored in the tool cupboard.  Everything needs a home! 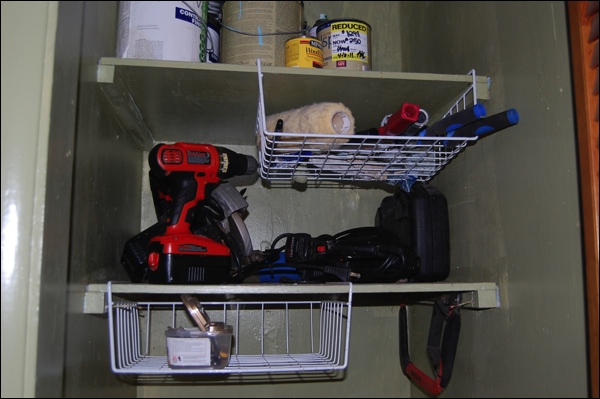 We own a nice little assortment of power tools now.  A good drill, a circular saw, a dremel tool, a zip saw and a jigsaw.  We do have a table saw, but we keep it out in the poultry barn with the wood storage.  We just seem to use it out there a lot more.  The one little box has all our drill bits in it.  We do need a few more, we’ve either lost or broken a bunch over the last 18 months.  We’re girls.  We are hard on stuff like that.  I think some are lost in the garage.  The garage is a sort of lost cause almost…  it’s a later fall project.  Unfortunately, it’s become a big holding area for just a bunch of junk and trash and such.  And some stuff for goodwill, and holiday stuff…  it’s a sort of elephant graveyard at the moment.  Our plan is to get it empty by the end of the year but I think we need to get one of those big containers for all the trash and junk we don’t want.  It’s a later plan.  We can only tackle one big organization project at a time!

We used the vinyl cutter to make a few witty sayings about laundry and to label a few areas…  and we hope to hunt up a few little cute things for the walls.  We’re girls, we like that.  But I have to report, it’s been a good week now and the room is still looking GOOD!  It’s amazing what a two day effort can do and how everyone feels good about keeping it well, after we all spent a lot of time getting it nicer.  We even cleaned out the two freezers and the washer!  We can actually do laundry here at the house now!  Imagine that!!!

It may not have been a thousand dollar redo, in fact, we really didn’t spend anything on this, just utilized the stuff we had.  But we like it, and it will do for now.  I even made a pair of curtains out of my fabric stash.  I like that.  We had the hooks and the little shelves and we just made do and we love it.  It’s been a dream to know just where things are.  Even Jr. approves.  That’s pretty cool!