After the swap, I was feeling much better and it was time to do something about our meat chickens that were hanging out in the garage. So we made an appointment and 11 of the birds were sent off to freezer camp. They were so calm and relaxed that our new processor, a delightful young man, declared that they were the nicest, calmest meat chickens he had ever seen. Healthy, clean and just well adjusted. I really like that. I know our nuggets had a lovely nice chicken life. They came back from camp all dressed and ready for the freezer. Or several of our friends, whom most of this first batch belonged to.

The remaining 10 birds were the more well, smaller and slightly scrawny birds and could benefit from a week or two without competition! But, they needed a more secure home and as much as we would have loved to have them tractoring about the garden, it was apparent that they needed tighter security. At least at night.

So… I noticed that they were doing fantastic in the courtyard, during the day, mingling with the free range flock, and yet at night, they knew that the garage was their home. And just a little feed in a bucket and they would rush in and wait for their bedtime snack. That got me thinking… why don’t we make the tractor a more permanent coop, and let them free range in the garden for a while.

So we went and got three pieces of 7/16” OSB (oriented strand board) a sort of scrap wood plywood, but sturdy… and we moved that bad boy over to a lumpy corner of the garden that had no plans. There is a big shady maple that has some roots that just make the corner not a super place for much in the way of gardening, but an awesome use of an awkward spot! It was perfect! 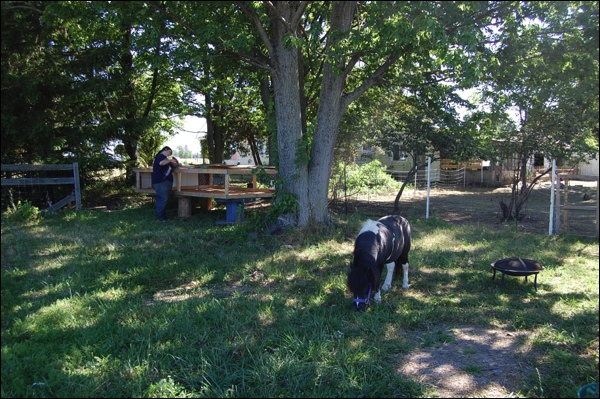 The nice thing is that it’s tucked in a corner right next to the dog yard and very close to the house. So we can see it from the kitchen window. That will help to make it safer. And we decided to raise it up on some of our wire spools, which we have been told makes it very hard to preditors to get in and grab a bird. They have to climb and hang on and it’s just awkward. We nailed that OSB onto the bottom so that nothing can get up into the coop. And then we flipped her back over, up on the spools, back in that nice little corner. It’s even close to the poultry barn where we keep feed and supplies. 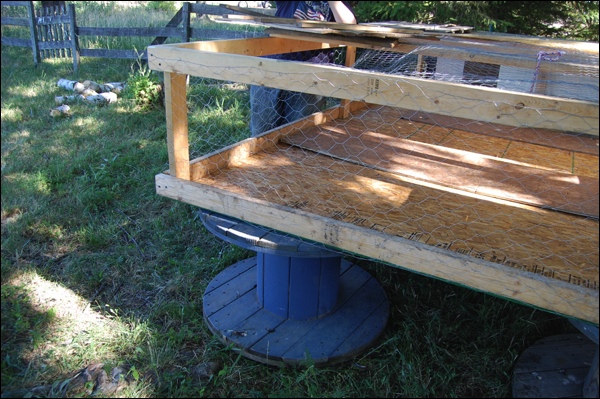 We’ll build a little ramp so that the nuggets can come and go as they please in the aternoons and early evening, but at night, they will have a safe place to roost, protected much more than in the ground tractor.

As I see it, we will keep the meat chicks in the house for the first week or so, when they arrive. Then they will go out to the poultry barn brooder for a few weeks. Probably 3 or 4 weeks. It’s a huge 4 foot by 8 foot brooder and in fact, we have two of them. So they may start in one, and then after a fortnight, they will be separated and we will use both brooders to give them lots of space. And then at about 4 or 5 weeks, they will move outside to the garden coop. For another two weeks, they will live in the coop, which is nice and big, 12 feet by 8 feet in size. By living there, they can get accustomed to being outside more, and learn where they live and such. When they are big enough, they can then start to free range in the garden. At first, just in the later evening, under supervision. But then as they become good sized, they will come out earlier in the day, until the last week or two they get to be outside, grazing all day long. It might sound like a lot of work, but in reality, I think it will be easy, and they will get the benefit of protection, yet the freedom to graze and have lovely chicken lives. And our garage stays a little cleaner! 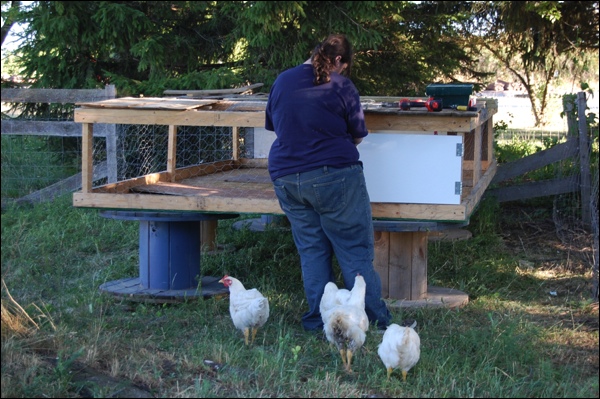 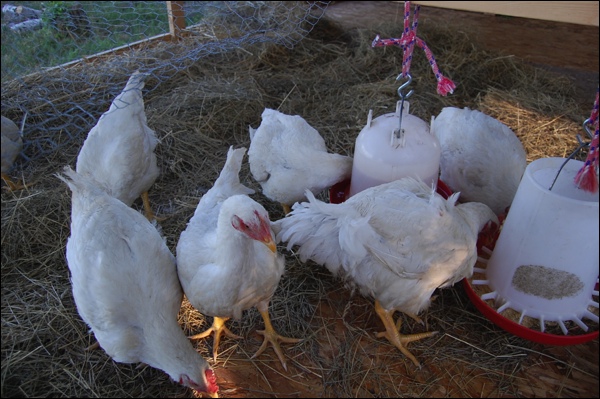 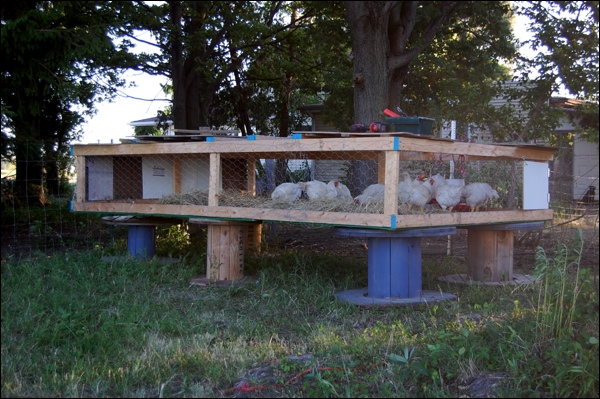 I’m happy to report that after a week of trying it out, we haven’t lost any birds and nothing has tried to get in to them. They are doing great with their afternoons of grazing and come right home at bedtime. They seem to enjoy it, and they are not bright enough to bother my raised beds, I really think they don’t understand UP… they are doing a great job of hunting all the little buggies in between the beds and boxes and that is just fine to me! They have even figured out how to squeeze through the garden gate and come wandering about in the middle yard when they want to. They like to visit their old courtyard and garage haunts often. And they like to follow Maggie around on her chores. All in all, a good ‘save’ for our chicken tractor. Not everything works well like you see in the magazines or online. But I love when you can repurpose something and it saves the day! Yeah!!!

When we were working on this, our big farm neighbor came with all his heavy equipment and harvested the wheat field to the east of our garden area. It was so cool to watch it happen. My gosh do they get a TON of wheat off these fields!!! My gosh… several semi trucks FULL! 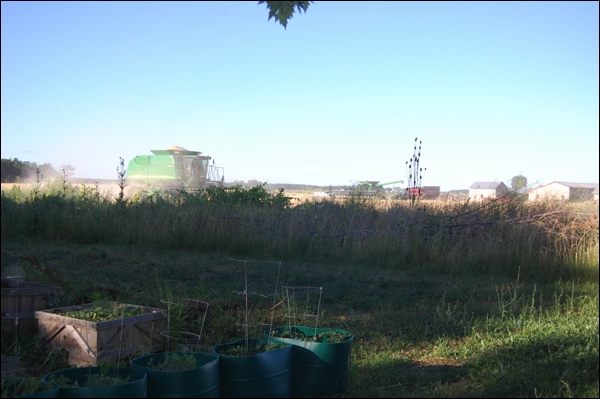 After we finished up the garden coop… I asked so sweetly for the girls to help me get our old nest box out of the big barn. The hens don’t like it for some reason, probably too big… but I have a plan for it! It’s going to become a little Banty Shanty palace for my four little sweet banties from Kelly and Chris!!! Can’t wait to get more done… I spent a good while cleaning it out super well, and will be painting it and adding a new roof and wire fencing and such. It’s going to look so cute!!!! 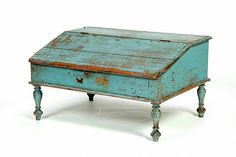 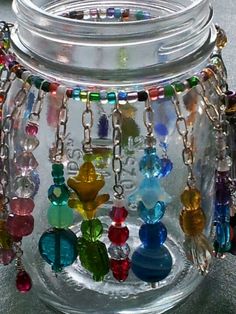 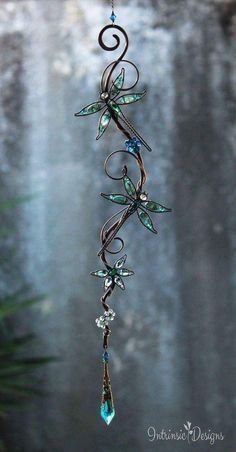 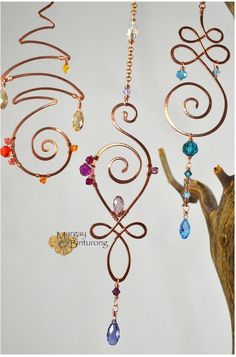 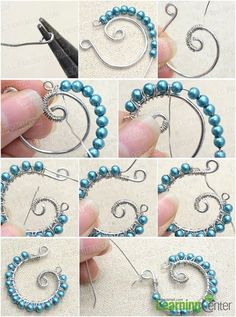