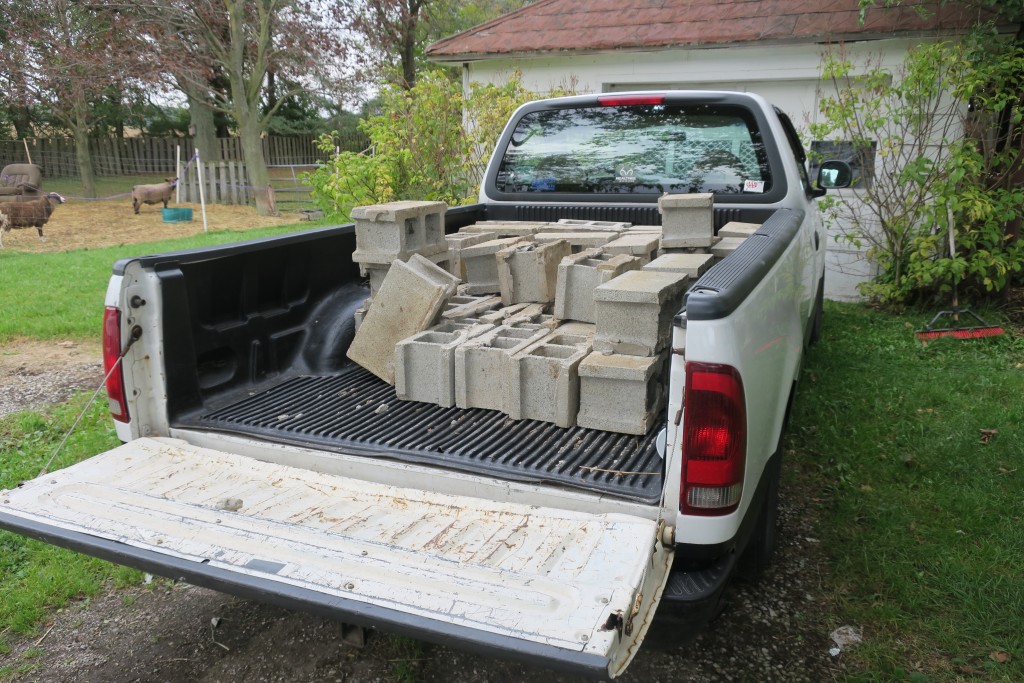 So sorry for the late of posts!  I think I just hit a little bit of a creative block and after over 2,000 posts here, I just felt like I was kind of repeating each year and the activities.  And then our fiber and weaving tool business just got super busy and well, it led to me being missing in action for awhile.  It’s not that I didn’t document activities around the homestead but I just didn’t always write blog posts and go into much detail on our little quick posts over on the Facebook page.

But I have missed writing and detailing much more of what we are doing, over here at the blog.  I know there are quite a few regular readers here, including my Dad!  (Whom was concerned enough to write me a note and see if we were still alive!!!  Yep!)  I imagine some have dropped away now, thinking that like all blogs, there eventually comes a time when the posts seem to stop.  I know some of my favorites have done so.  I guess it’s just human nature to sort of get a little tired of a routine and sort of drop off the face of the earth, now and then.

But I assure you, we have been busy!  And I am going to try and get a post a day up here and get caught up!  Some of the things happened this late summer so they may seem a little out of date but I will try and take them in order, just to keep the continuity of the blog in order.

One thing that I did want to accomplish this year was the transition of the big side garden out back to my more simple, manageable courtyard garden!  I had the 6 wooden beds installed and filled and they were doing well with various veggies.  But I knew that I wanted to make one big bed, for my lavendar and other flowers that would incorporate a bench and a slightly different look.

I searched around, was on Pinterest like a fool and just hunted out the right container that I wanted for my look.  I thought it would be cute to use galvanized tubs, but those are too hot right now and everyone wants too much for them.  Even brand new they would have been about $18 each and I wanted six or eight of them!  Much too high for my budget.

And then I saw it.  Online, somewhere…  raised beds with cement blocks!  They last forever and you can build unique shapes and such with them.  And the best part?  I knew that our local salvage yard had them for just 50 cents each, so it would not cost me a fortune!  So we loaded up the truck with 40 blocks and got started! 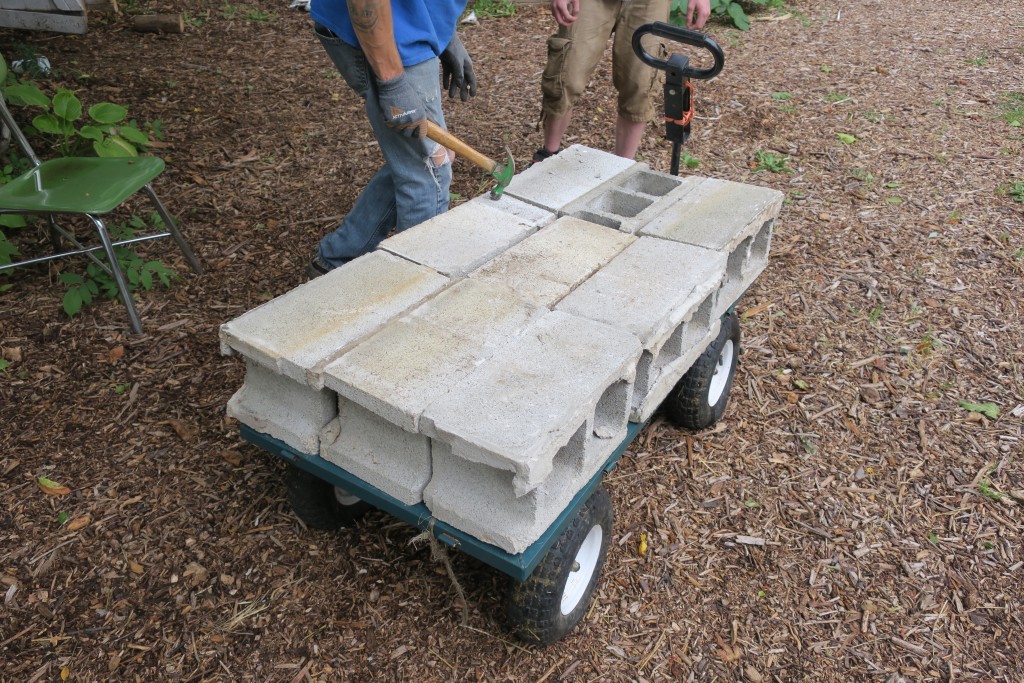 Yes, the blocks were used.  And yes, some of them had old concrete bits on them, but a good whack from a hammer made that issue no longer a problem.  Justin and Tim, the homestead helpers, were my main helpers!  Concrete blocks are heavy!  Poor Tiffany, the truck!  She was a bit on the heavy side but she handled it like a trooper.   Have I said, we love that truck???  We sure do! 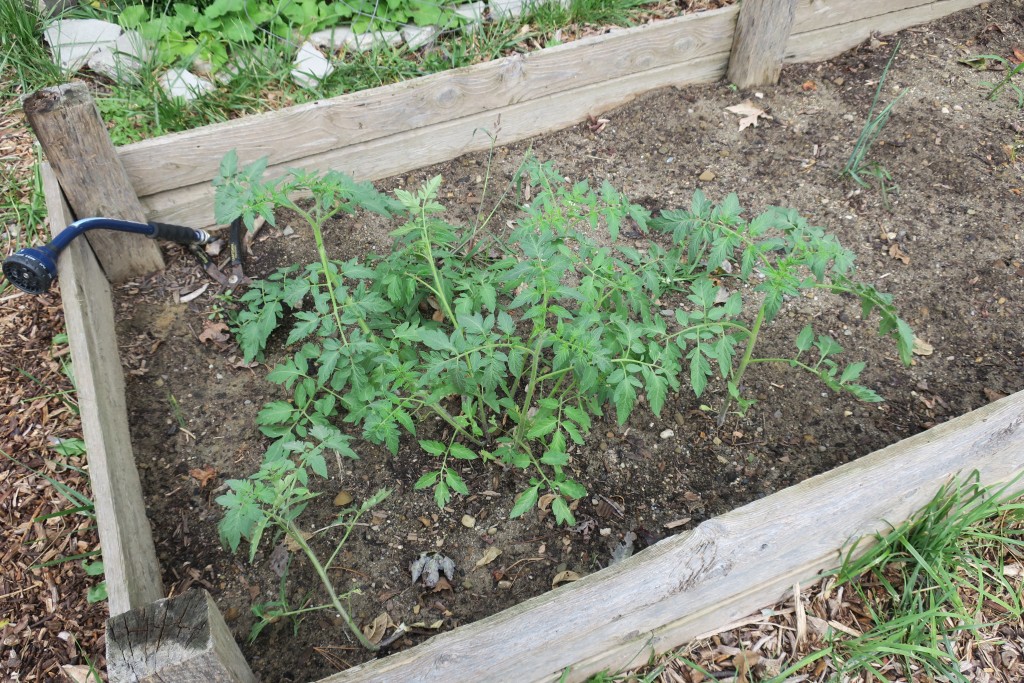 I got a big kick out of these volunteer tomato plants that were trying to grow in my garlic bed.  They were not going to make it to fruit time because this expansion was late in September, but they were sure trying.  We had been throwing the funky tomatoes over the fence to the ducks to eat but I think we missed a few!  We throw like girls… 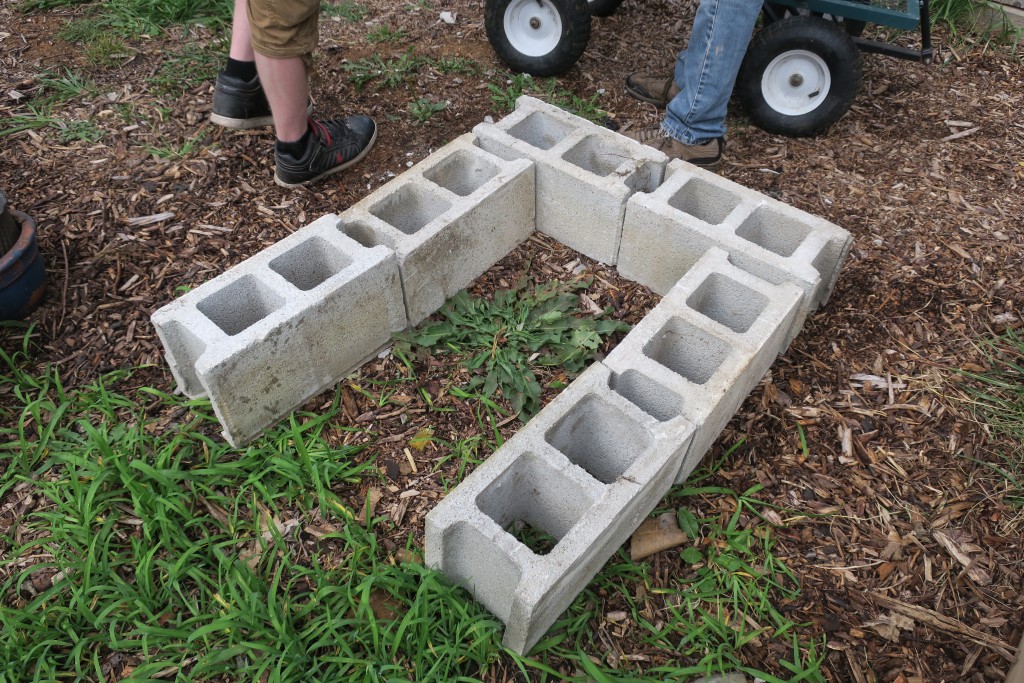 And it begins!  I had this idea that I wanted it to be curved, like a sort of half shell look.  It took a little bit of fussing with them to get the curve right.

My zinnia crop this year was so beautiful!  We all remarked how pretty they were and we took many cuttings to bring into the house.  Once they are done, I’m going to let them go to seed and try and save as much as I can.  I would be a happy gal if I had zinnias all over the homestead! 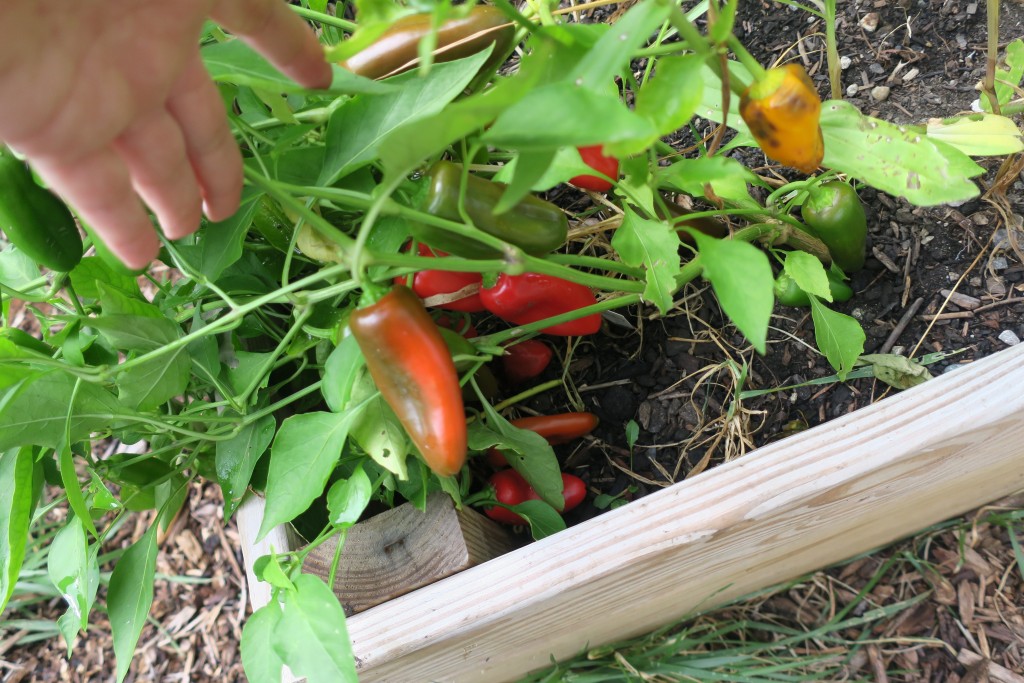 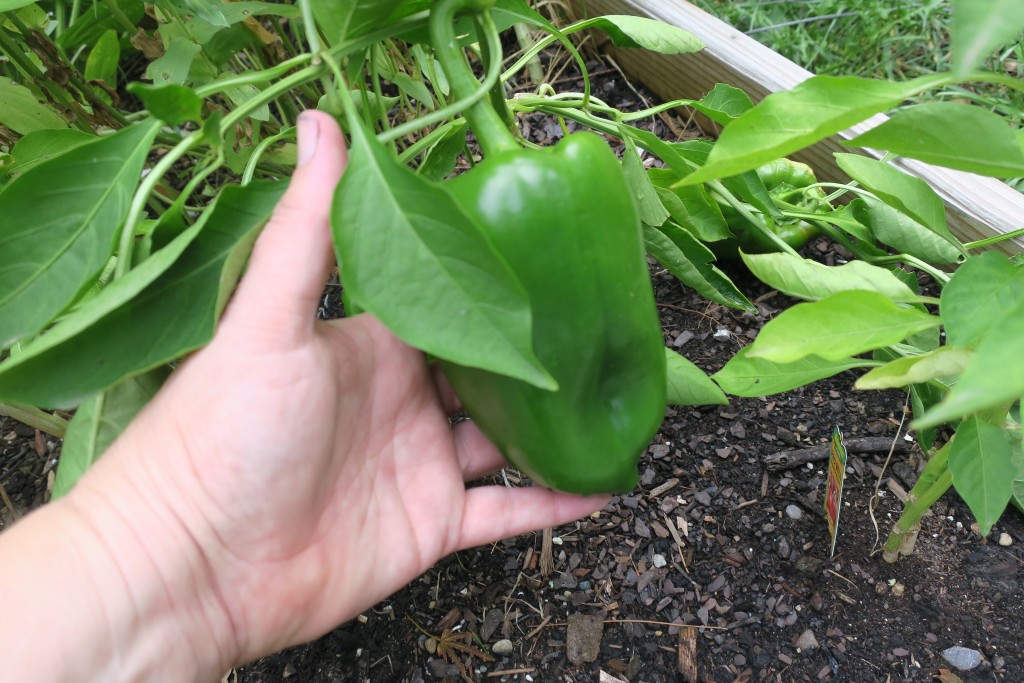 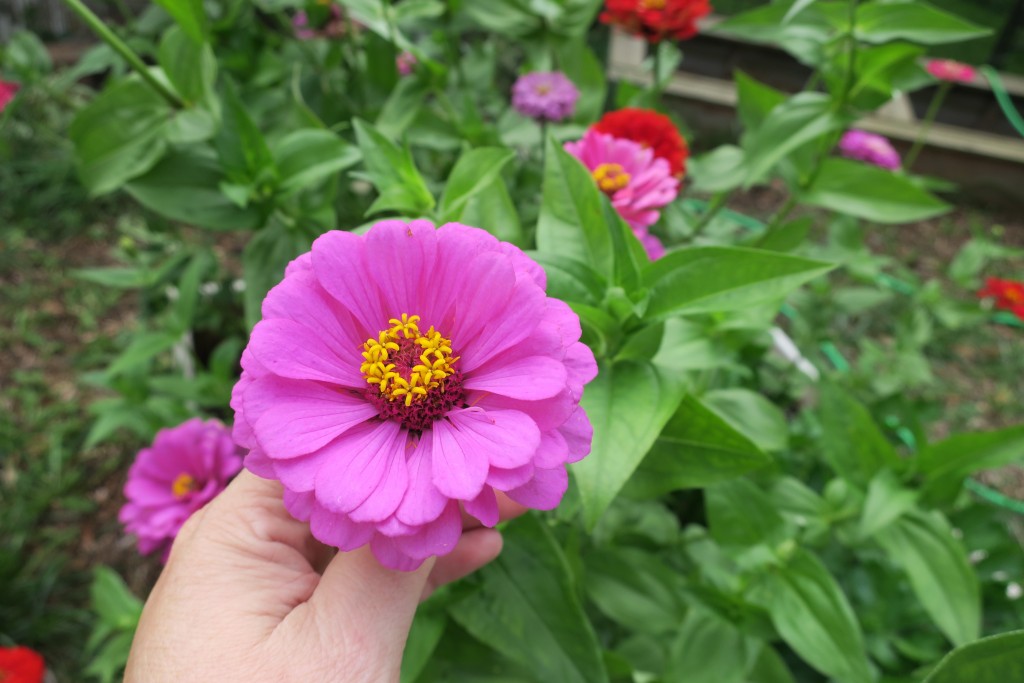 These lovely little plants are waiting for their new home!  I did get one tub to try out but I think it will just be a lovely focal point near my old copper colored tub.

The ducks came to take a look and make sure that the building was up to code! 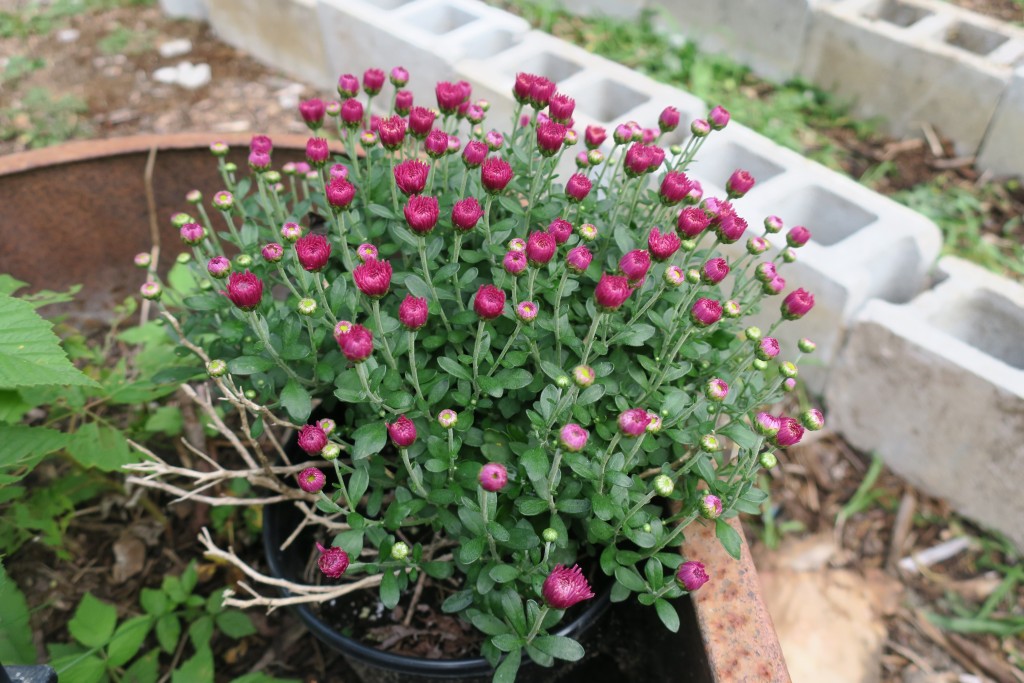 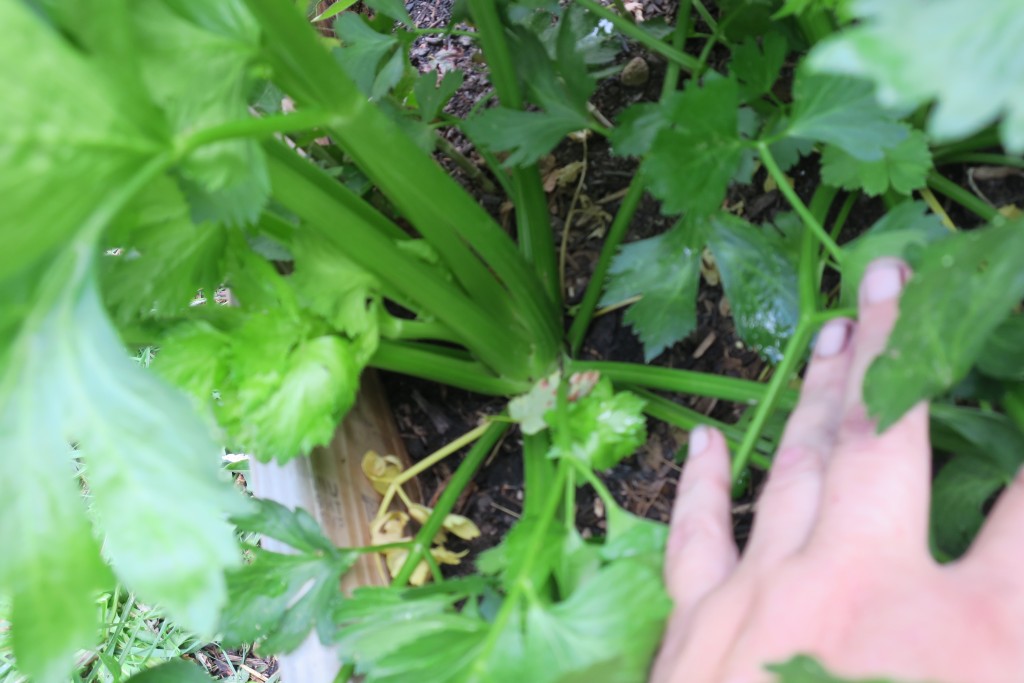 And look!  Celery!   I see some potato salad and tuna salad coming soon in my future! 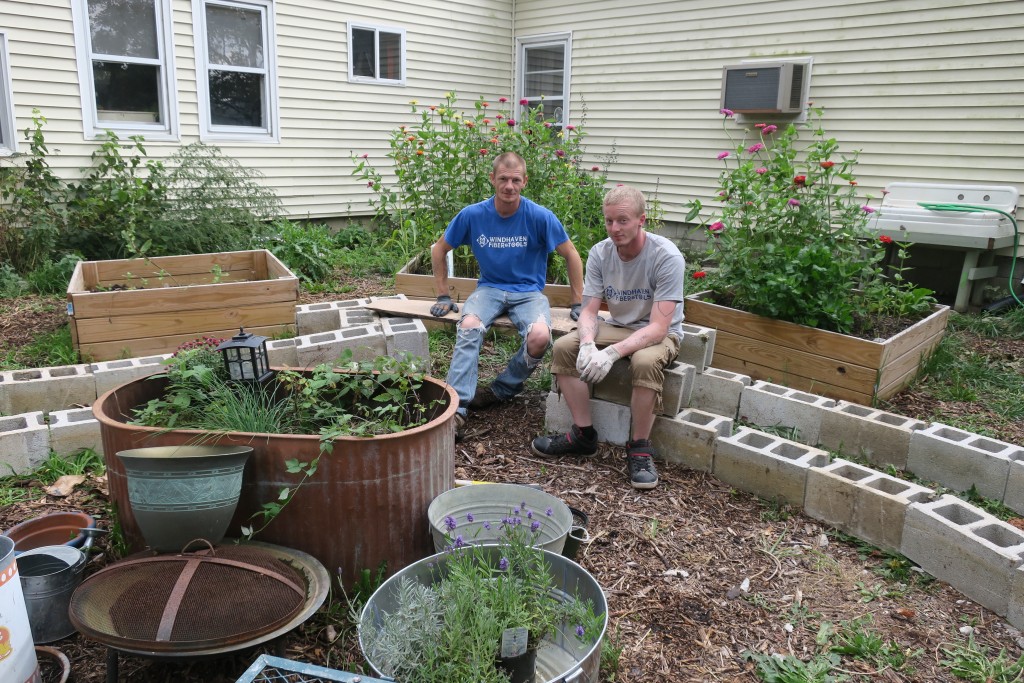 Doesn’t it look lovely!   We got one layer in.  Need more blocks!  Still, at $40 total for the bed, it’s a deal!  It will last a good long time.  I had saved this big piece of slab wood and we made a little reflecting bench in the middle of the bed! 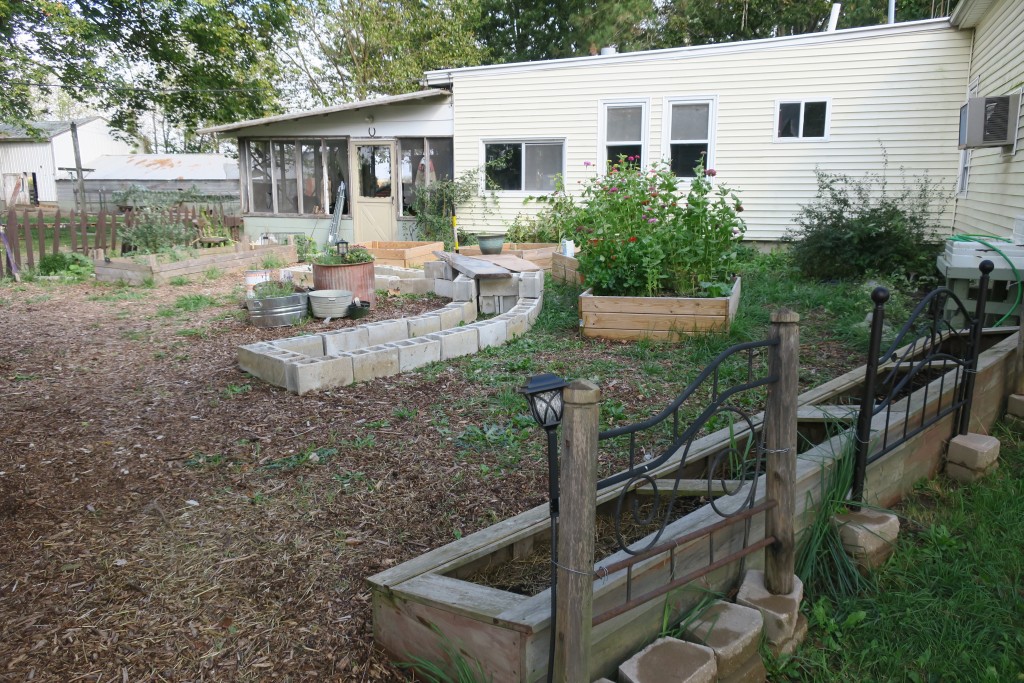 I want to add one more wooden bed right in the middle, there, behind the cement bed and in from of the long gray wood ones.  And then my plans will be complete!  I might not get the materials for the wood one until spring, but you never can tell what might inspire me!  I should be able to get the pictures up soon from the final wall build of the cement bed!  Soon!