Last week, our Friday projects included making some hay feeders for the goats and sheep out of cattle panels.  Basically we got one panel and cut it into quarters and wired a 2 foot by 8 foot section onto their paddock fences.  With a bit of hay baling rope, they angle out a bit at the top and allow the animals to feed a little slower on their hay.  Instead of ground feeding, this should really slow them down a bit and keep their hay cleaner and thus, allow them to eat it more completely.  The goats are really bad about wasting hay!   I love how they are all watching us wire this new feeder to their fence with anticipation! 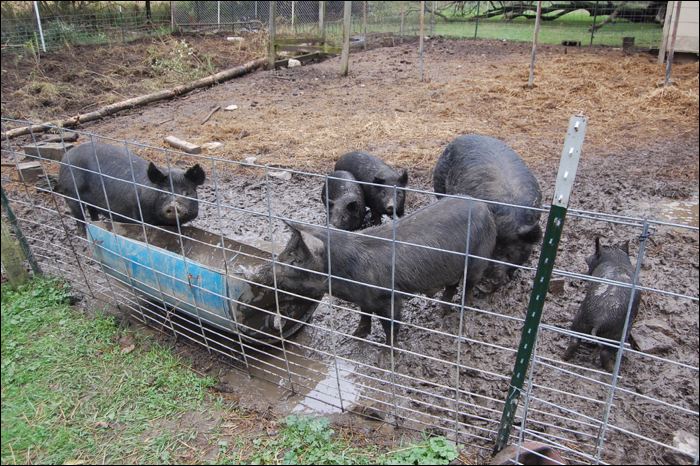 The pigs were very curious as well.   They have quite a wallow going on ! 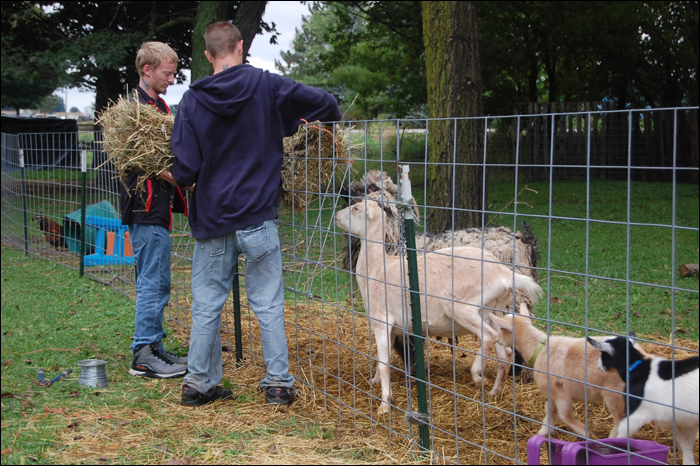 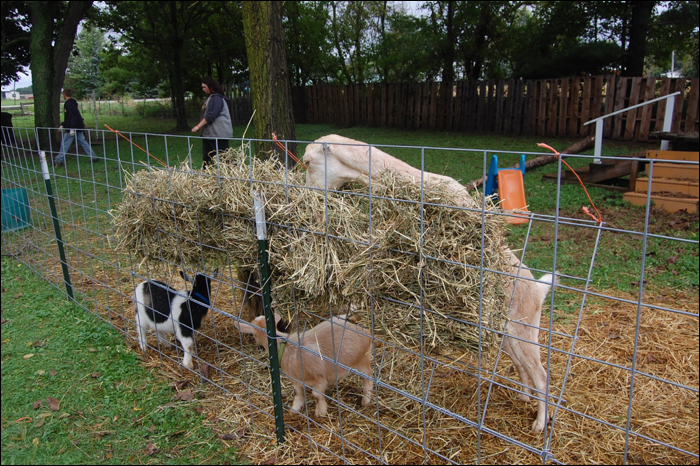 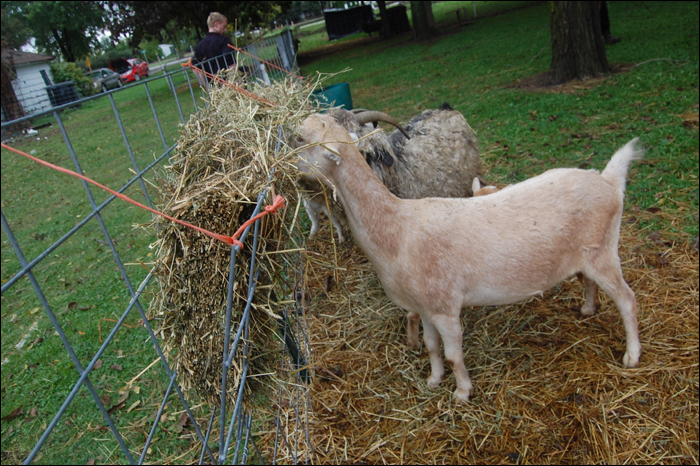 So far, so good!  They have been in place now for about a week and are working fabulously!  A lot less waste.  And the best part?  I see hay in there for most of the day, so that means they are eating their fill at first and then lounging about eating more through the day when they feel like it.  Success!   And even the little guys like it.  We made them a separate one that is much lower and they like to go between both feeders for fun.  They are so silly! 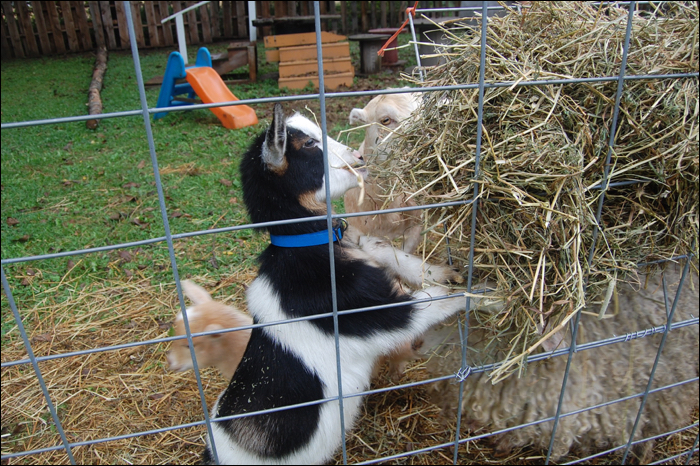 Next up was the ponies!  They are very good at wasting hay as well.  They will grab a mouthful and drop half of it and are just messy easters.   Shadow is not sure but he’s very interested in what Tim was doing.

What a muddy dirty little pony!   I brush them but we have had rain off and on this week and you can just forget about it.  Shadow, especially, he loves to roll and lay down to nap.  He is a silly boy!

The ponies are very watchful.  What weirdness is this?

Shadow loves his new floating hay flakes!  It’s hard to take a good picture but I hope you can sort of see the simplicity of this design.  Just simple wired panels…  attached at the bottom but loose at the top so no one gets hung up.  And if someone were, the twine is easy to cut or might even break under pressure.  We didn’t make it super tough for that reason.  Especially for the goats because they like to climb on things.  So far, no one has gotten stuck at all and we have had FAR less waste! 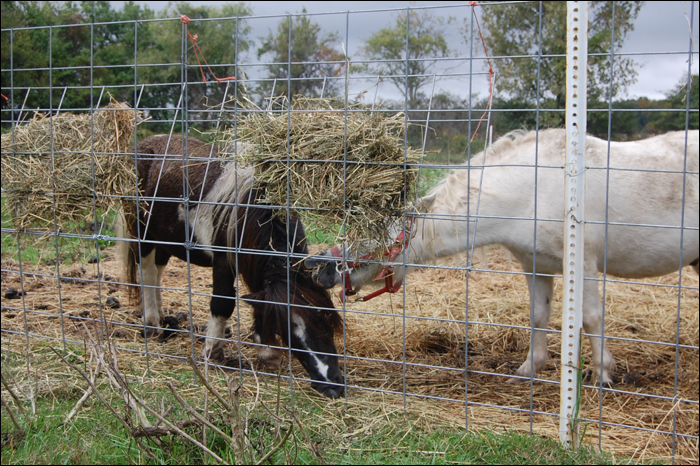 The ponies, especially, they like to nibble the hay all day, but I find that they are gobbling up the chaft that falls from the flakes quickly.  That is the leafy green bits that is mixed in our hay.  So it’s like win win!   They are eating their hay so much more completely!  And I love seeing hay that lasts through the day.  Most farm animals benefit from slow eating through the day.  It’s so much more natural for them.  Before, they would sort of gobble through and waste a bunch of hay and then want more.  Now, they seem to be more content and eating their fodder so much more completely!  It’s wonderful!!! 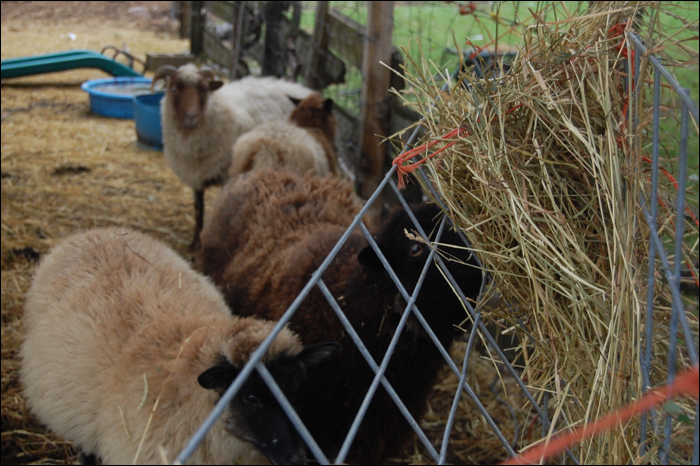 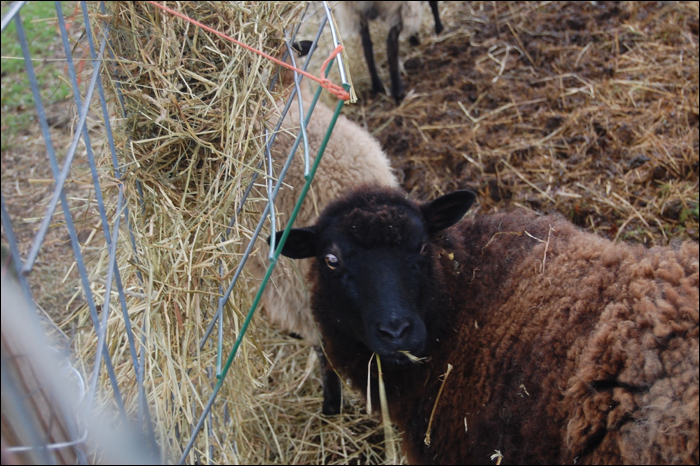 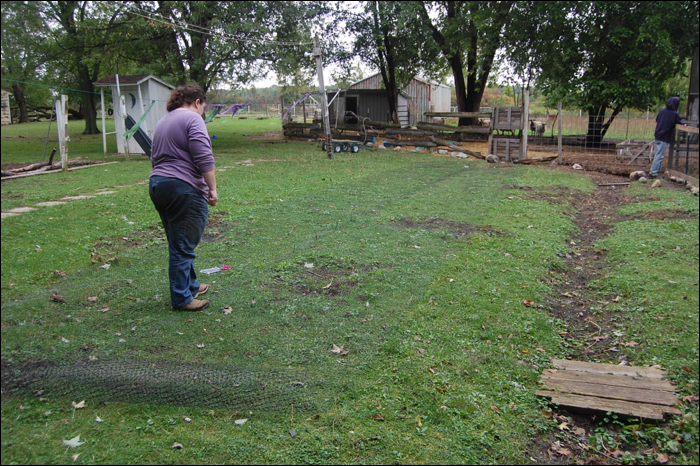 After building and installing the hay feeders, we moved on to the chicken coop.  We have had trouble keeping our hens in our coop and run.  The goats had wrecked the fencing around the run and then got tangled up and ripped our lightweight netting we had up there.  So we got some new fencing, and installed some boards to help keep it firmer along the run.  And we got a much stronger form of netting for over top of the run.  We also did some modification inside the coop, in that big silver topped building we call the poultry barn.  Jessy helped as we measured out and used little tie wraps to make it wide enough for the run. 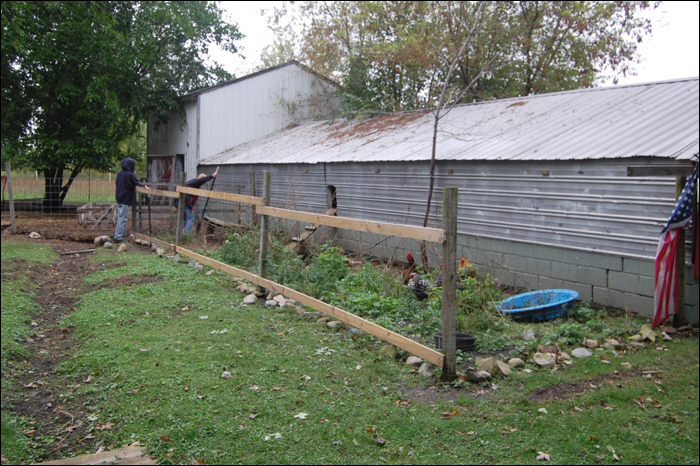 The guys helped as we fixed the far back end that was just sort of rigged up and needed help.  New posts and some fencing worked wonders!  They also removed that little tall dead tree in the middle of the run that made things difficult for netting.  So far, so good…  we have caught most of the free ranging birds and made the coop and run much more secure.  If there was any advice we could give ourselves five years ago, it would be to build smarter and much more secure.  And don’t go too cheap.  Everything that we have done that was a little on the cheap or rickety side has failed.  Do it right, first.  A huge huge important note for any new homesteaders!!! 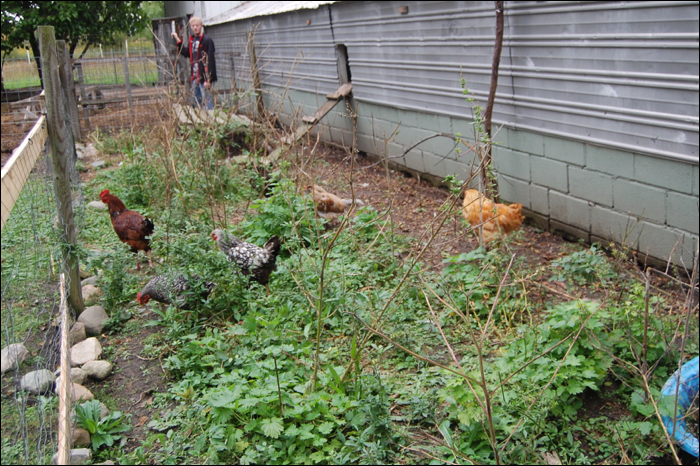 Maggie made a new gate for our courtyard garden!  Yah!  The old one was really worn out and falling apart.  I like how she used a few pickets from the old gate to dress up the new one.  I’m going to paint it and part of me wants to paint it a dark plum color.  We shall see!    It was raining way too much to paint anything so it had to wait a bit…  Still, happy to have a safe and functioning gate again! 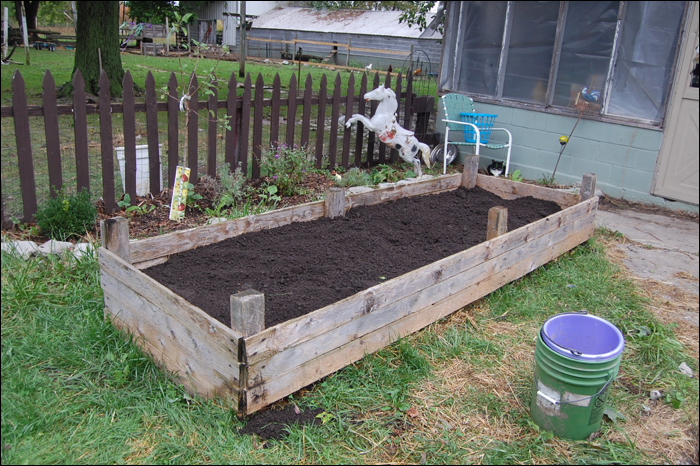 Got my first raised bed in the new courtyard garden all done and filled in with good fresh dirt.  We filled the bed about 4/5 full of old straw and composted paddock muck and then topped it with some dirt and composted cow manure!  It should be veggie gold come next year.  I wanted to get at least one bed done so that I could plant some heirloom garlic for next year and maybe a little lettuce!  Just for fun.  I have slowly been adding a few discounted perrienals around the border garden.  I would love to have it all lush and filled in nicely with flowers and fruit!  That is the goal… 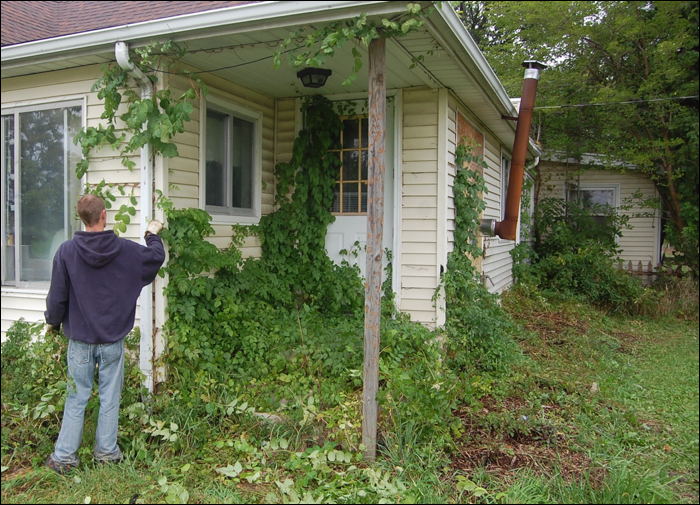 This is a little side porch on the east side of the house that we don’t use.  And every year it is overrun with this terrible vine!  There are really several vines I think.  We hacked it back again.  I am pretty sure that we are just going to have to find the vine source and do a serious weed killer dose once and for all.  It’s just not helping the house or the porch. 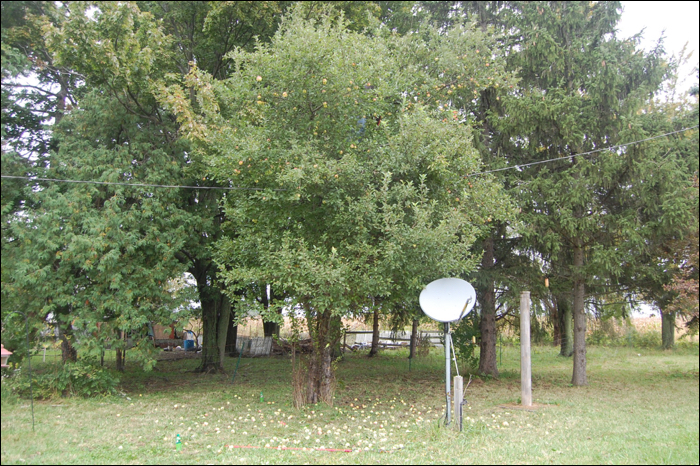 Hard to see but Tim climbed up in our one productive apple tree and gave the tree a good shake!  And it released a LOT of apple for the critter gang.  This tree produces a small little golden apple which is fairly tart.  It’s an old tree so we’re not sure of the variety.  The animals LOVE them and even the chickens make the trip out front to get wormy apples on the ground.  A double treat for sure.  We gathered up a whole sled load of lovely goodies and everyone had a big feast! 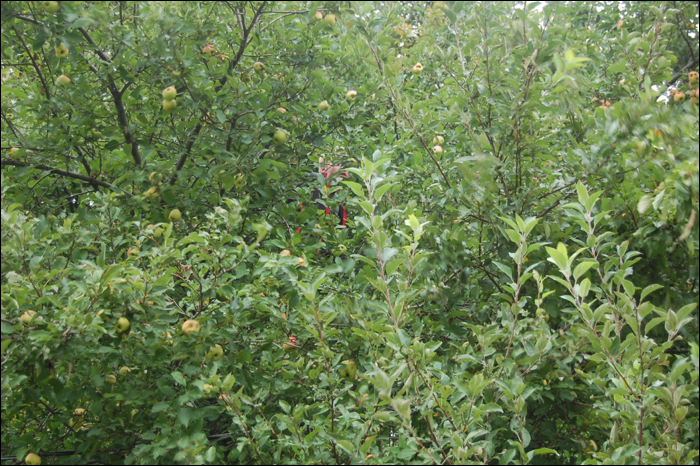 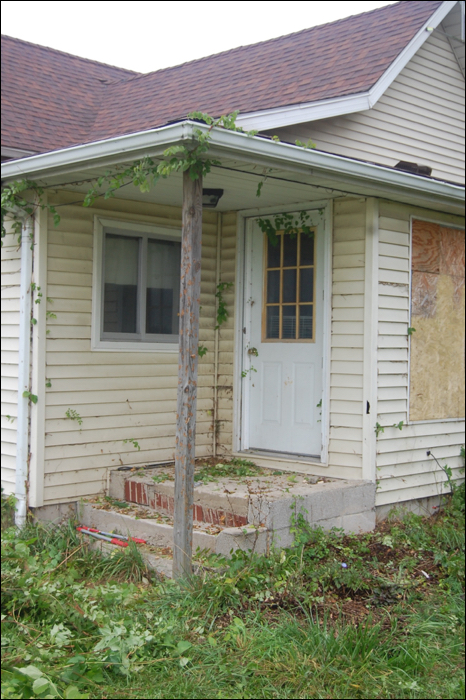 Ta da!  A porch again!  Some day it would be nice to maybe put a little deck off this side of the deck, a place to sit and watch the trains and such.  Wave at traffic?  I don’t know.  Just something to utilize this sort of weird area of the house.  Maybe in a few years we will know what to do out here.  Until then, death to vines!!!! 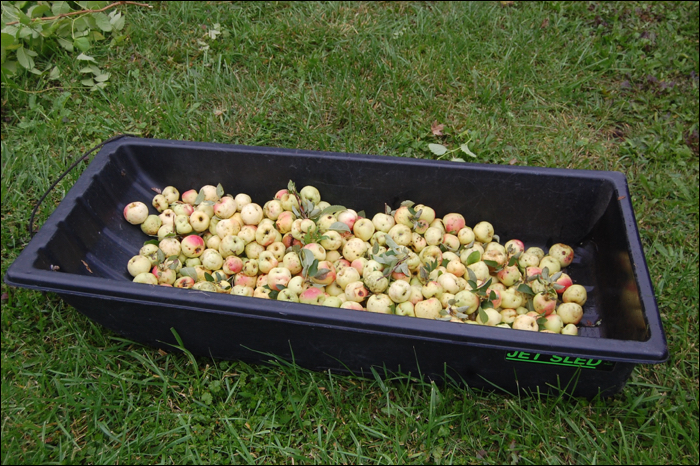 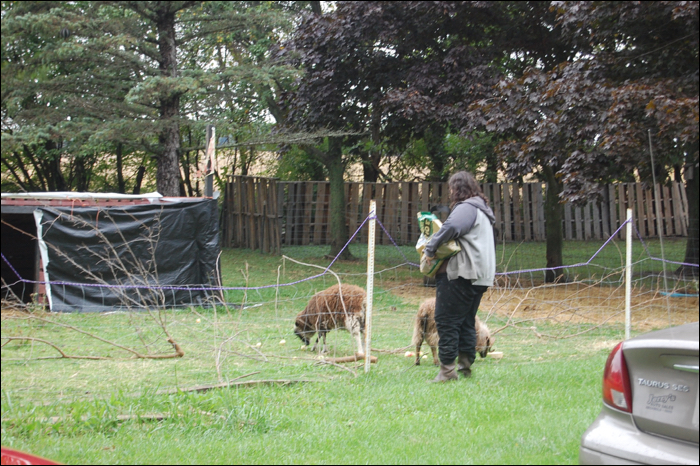 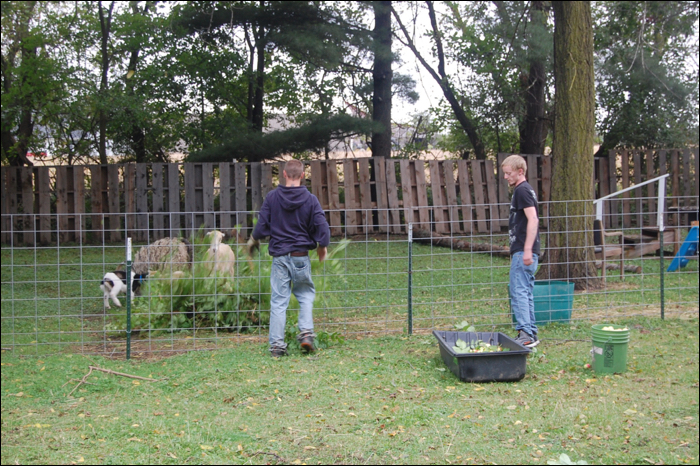 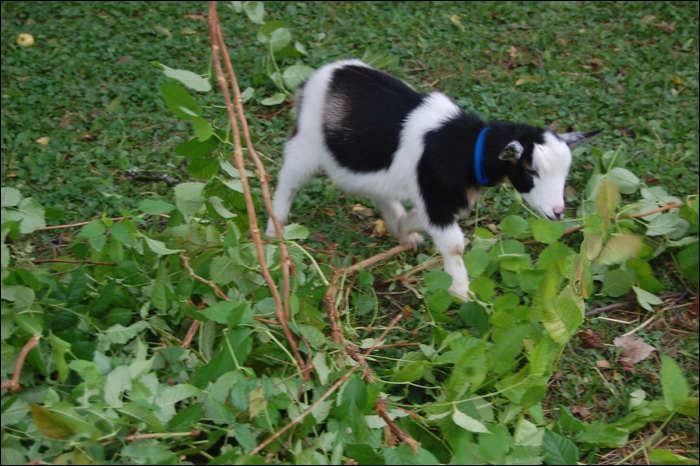 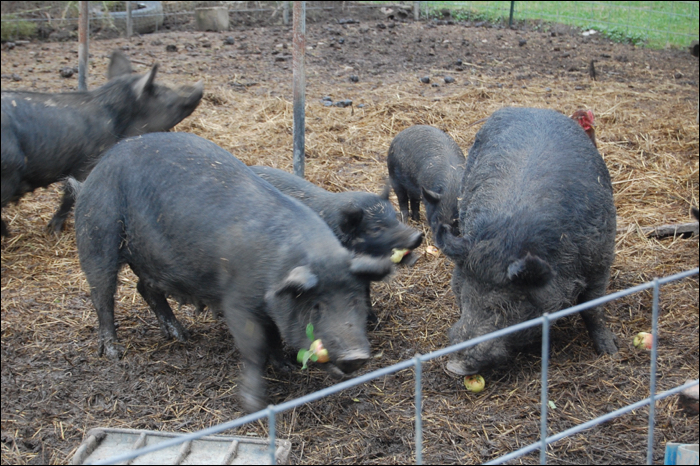 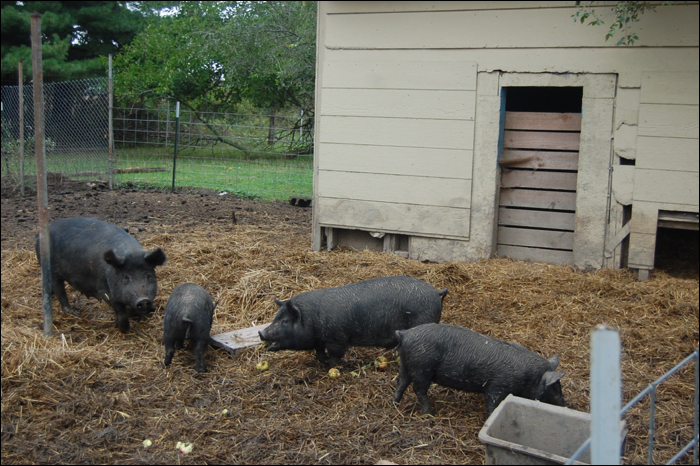 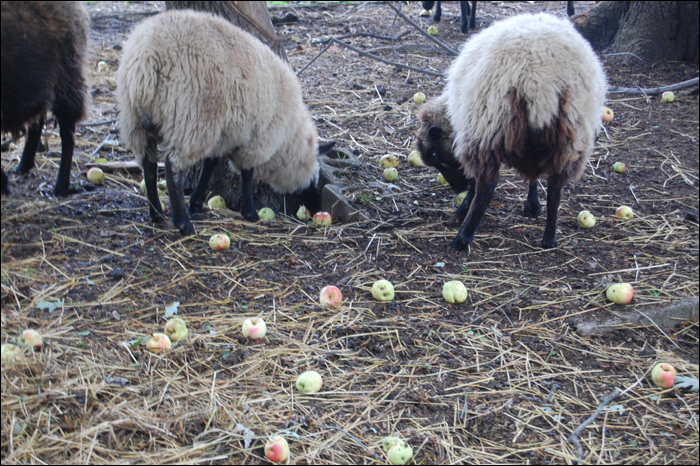 Everyone sure loved this Friday day chore session!  It was all about critter eating!  Hay, new chicken run with greens, vines and apples to eat!   Another super productive project day.  Trying hard to get caught up before the really cold weather comes!   We have many two or three project days left…  Hope you are all getting ready on your little homesteads, too!