The second week of help, was to take on the courtyard and start my new kitchen garden space! As you can see, it is a bit overgrown and a jungle!  The courtyard has always been a bit of a challenge for us.  I’ve always envisioned this lovely little sitting area with flowers all around, and cute whimsy to decorate with and in five years, nothing.  It’s pretty much just a walkway from the front of the house to the back yard.  So that is going to change. 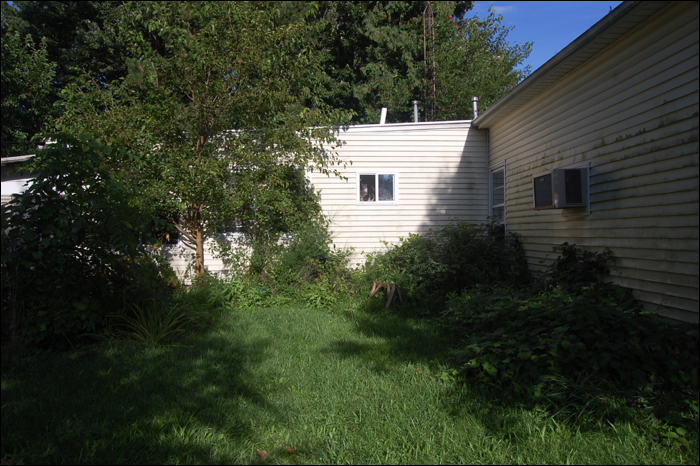 That tree had to go.  It was nice and all, when it was small, but now it’s huge and just too close to the house and all.  It was time.  It blocks sunlight into the kitchen and it’s getting too big for the area.  Maggie chopped it down and fed it out to the sheep and goats!   They LOVED it… 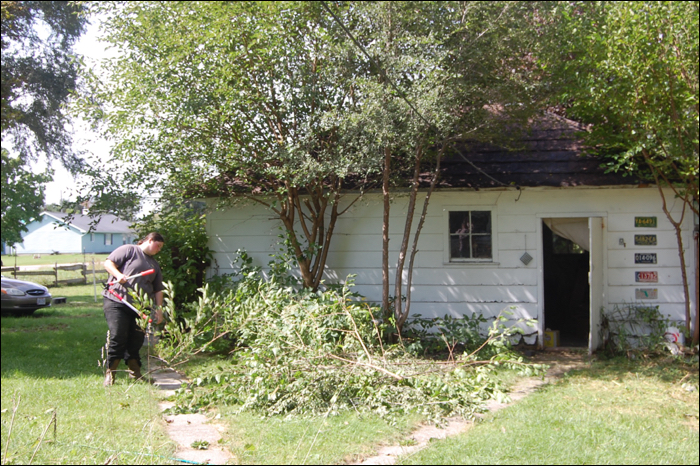 She also trimmed up the couple little mulberries by her garage.  Those we did want to stay because they shade that building considerably and they are manageable.  The livestock got a great amount of browse this day!  Happy happy hoofies! 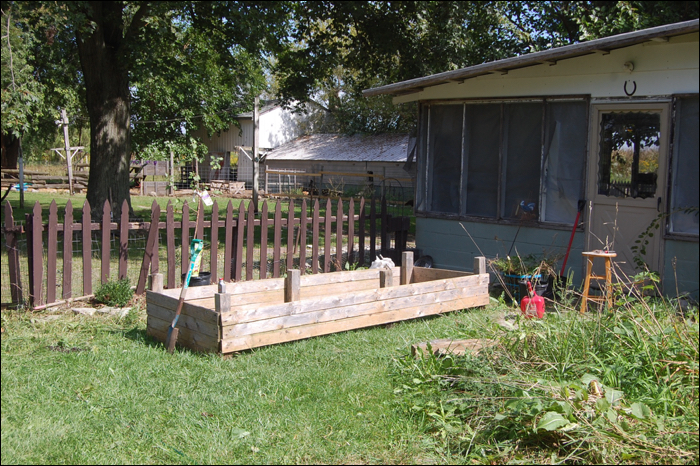 I had spent the day before at the local Lowes looking around at lumber for my new raised beds.  I had a pretty tight budget and all the lovely thick beautiful boards I wanted were getting a little pricy.  And to be honest I wasn’t totally sure about the whole layout of the garden space yet.  I knew that I did want two long rectangles to sort of flank either side of the garden gate and fence.  Just like these two boxes that I had in my old big garden.  And I just kept going back to the fact that those boxes would be perfect. And then I had a DUH moment…  why not just move those two boxes for now?  Save my budget for later!!!

So Justin and Maggie pushed and shoveled and grumbled a bit, and managed to get those two boxes free of their dirt and vines and moved them in for me!  Did I mention how much I just love those two?

Hey, at least I didn’t have them move all the dirt as well!  (Mostly because those two beds always grew a TON of weeds because I made the mistake of using some awful dirt for them… 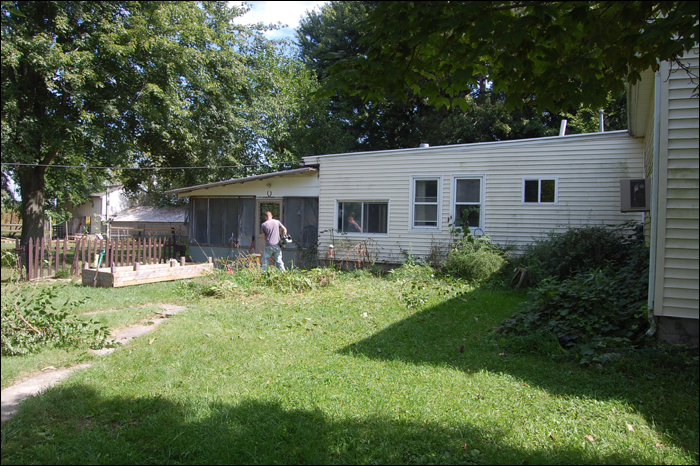 Once the trees were cut back and removed, and the raised beds installed, the weed whacker came out and it was cut back time!!!  It was a chore, let me tell you.  And they did most of the work!  I was the supervisor and cheerleader for most of the day, because I had to help with orders and get a truck load of boxes to the post office!  I was also in charge of hydration and snacks.  I take my job very seriously!

I just can not believe what it looked like after they were done.  Just so much different!  Open and cleaner…  less jungle, a little more courtyard! 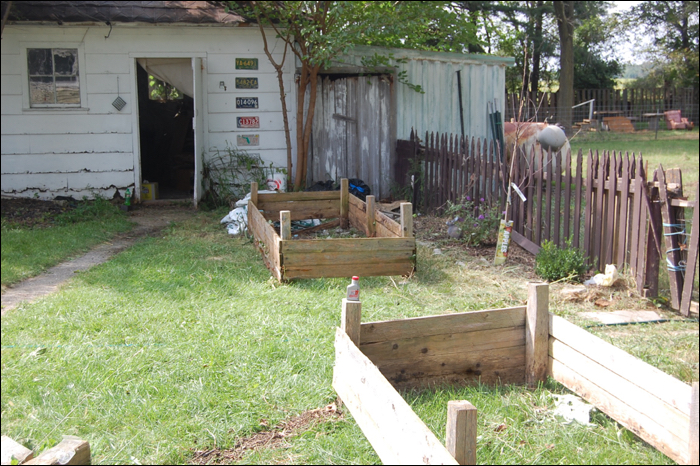 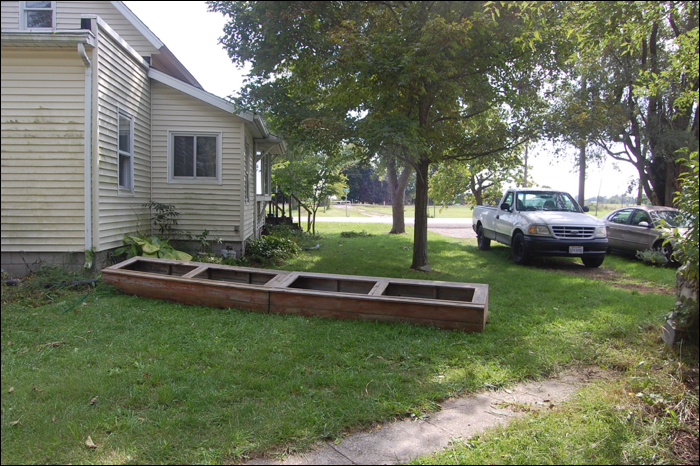 Another salvage from the old garden were the two beautiful cold frame beds that my friend Tim made for me years ago.  They are still holding up great!  I am going to give them a new spray of stain and poly to give them a few more years.  I love how they form a sort of little wall there.  It’s perfect.  I want to put up a little fence behind them eventually, something fun and whimsical.  Perhaps a bit of black iron look.  Not totally sure yet, I will let it come to me!

Man, oh man…   the whacking is almost done.   Just unbelievable.  Justin cut back the peonies that line that right side of the house…  the one with all the greenish dirt on it.  They were all done growing and flowering and all, so it was time.  They will come back nice and solidly as they have the last five years we have lived here.  That siding there, it always grows this really weird little bit of like mold?  Dirt?  Both?  It washes right off.  We will get the pressure washer out and give it a good scrub.  There is not a ton of light there, it’s fairly well shaded there.  I plan to put some beautiful hostas and other perennials along the house beds, just pretty cutting flowers as well.  There are a few plants in there, and a bush or two…  but nothing really planned.  I am already dreaming and plotting for what will go there!

Maggie brought me several wagon loads of good spent hay and compost from the ram paddock.  My goal is to get at least one of those beds filled up so I can plant a little late season leaf lettuce, radish and maybe a little spinach.  And of course, garlic!  The other bed we will work on as time permits as well as the cold frames.  I did have about ten bags of good top soil, so we added it to the first bed.  I think it needs a few more, so I think this week, I’ll get ten more bags and that should make it nice.  I am so excited!!!

Huldur and Lukkus were out in the middle yard to graze and they stumbled upon us burning a bit of vines and left over bits from weeding!  I think they were appalled…  Why this was still good stuff!  Even though they were fatter than fat from eating TREES…  they had to nibble and pick at these vines as they smoldered and burned!  Silly boys. 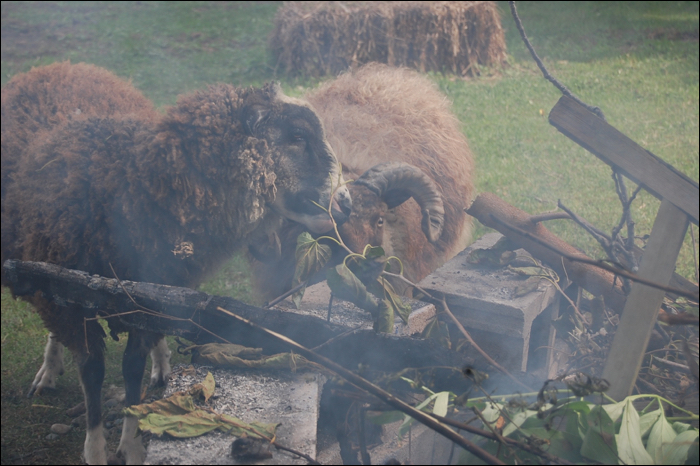 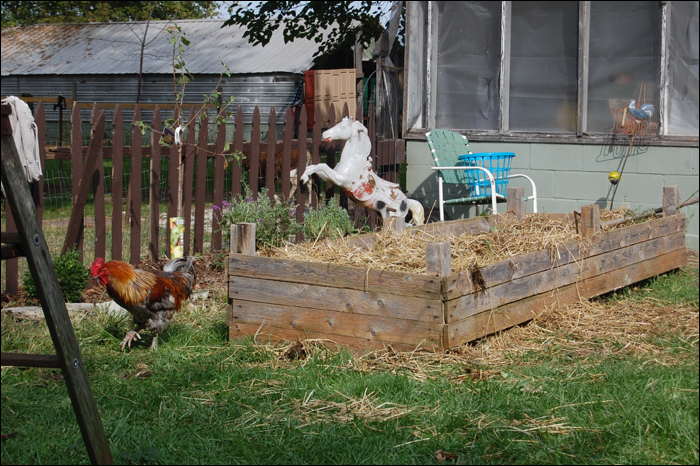 Of course, we had chickens and roosters checking out our work!  It was a TON of hard work, but man, it looks amazing in there.  Still got more plans, but this was enough for one day for sure!

While we were outside working, Jessy spent the afternoon working inside the kitchen!  We have this little nook area, that is a little too small for our table and we’ve just never wanted to sit in there.  It used to be very dark because of that tree, but now, wow, super open.  The ceiling in that area still has a little leak that we are working on fixing and the ceiling needs to be totally gutted and replaced, but that’s not in the budget at the moment.  Still, this little area seems to lack any sort of direction.  We had these ugly pair of cabinets in there that we found on the roadside and worked but they were just, well, ugly.  So she took those out to the screen porch for their new life and then cleaned up the area for a new little area we call Kitty City. 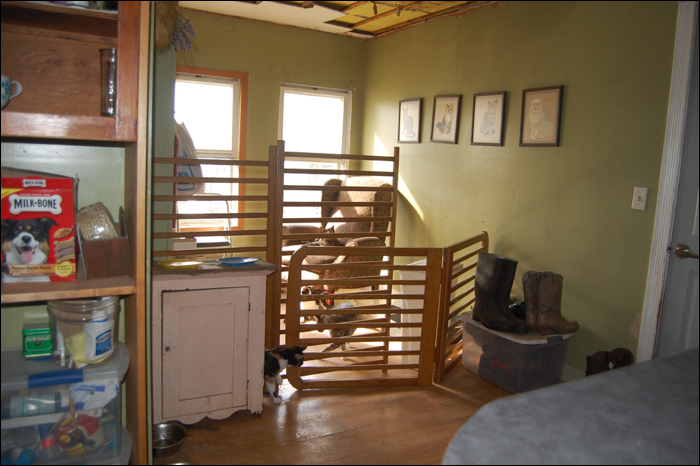 We have an ancient old kitty, Miss Dixie and she is having a few little problems.  She just is having trouble jumping and also making it to the litter box in time.  She is at least 16 years old.  So to make it much easier on her, Jessy moved her favorite old chair into the corner.  It is a little rough and one of the arms broke, so no one was sitting in it, but Dixie.  She loves it.  Jess also moved the litter boxes into the area, food and water on the floor so she could get to it easily and then we have these fun crib pieces that we use every so often for weaving displays!  They are hinged and nice looking, so she used them to create a little barrier so the dogs won’t pester her.

Before, we had the food and water up on a little table, out of the reach of the dogs.  But that was hard on Miss Dixie, so now, everything is down on the floor and safe.  Plus she just doesn’t like the dogs always sniffing and messing with her.  Now, she has a safe place.  Maggie moved all the bird feeders right in front of the two windows.  So now, Dixie has Bird TV to watch and occasionally SquirrelTV.  And of course, lovely sun to bathe in and nap in.  She is in HEAVEN!

She can come and go if she pleases, as can the other kitties.  They are all strong enough to leap over the lower panel, but there is also a little alley they can go through if they don’t want to jump.  And it allows Dixie to come and go if she pleases.  But really, in the last week or so it’s been there, she hardly leaves!  And why would she?  It’s everything she wants and Jessy can come and visit and sit with her in the chair, carefully.  Dixie LOVES watching the feeders.  And the best part is that the other kitties love it as well, and come and visit her all day and night.  It’s so perfect.  And no more accidents!  Yah!

Victor really likes to sit on the little stool and hang out with Grandma Kitty.  It’s like a cat nursing home.  You can’t see but Jessy also put a couple cardboard boxes in the corner and that is happiness as well.  She puts a little catnip in there now and then and it’s a kitty playtime free for all.  There are a couple toys in there as well, that they can’t seem to get out of the area, so it’s fun to play with them in there.  It’s just so perfect for our aging kitty friend.  She can have a special place of her own and just hang in there a little longer.  That makes us happy.  Elderly pets are very much a part of our family forever, and if we can help to make them happy and have a successful time in their golden years, it’s even better.  She’s been checked, she is relatively healthy, just having a little age related issues.  And since the space has been hers now for a week and she has hardly left, I think it’s a success.  She gets a lot of people time whenever anyone is in the kitchen.  And the rest of her time is spent napping in various spots and then watching out the window at the courtyard and her feeders.  It’s a pretty good life for a kitty, I think! 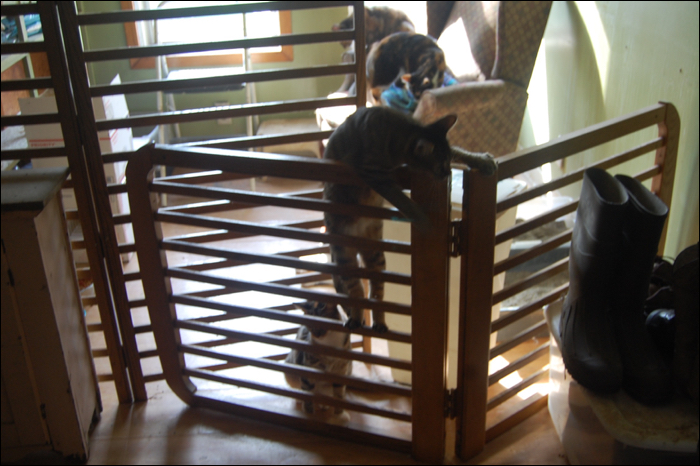 Toto is showing Lilly how to climb over it like a jungle gym.  He is still a goofy kitten at heart even though he is almost a year old!

That is the story of our very productive project day…  I have one more week to catch up on!  And then I will be current.  But I think I will wait a day or two to add that to the blog!  I have to go and work on a new website for Jessy!  It’s getting there…  almost done….

Hope you are having a wonderful time on your little bit of land!