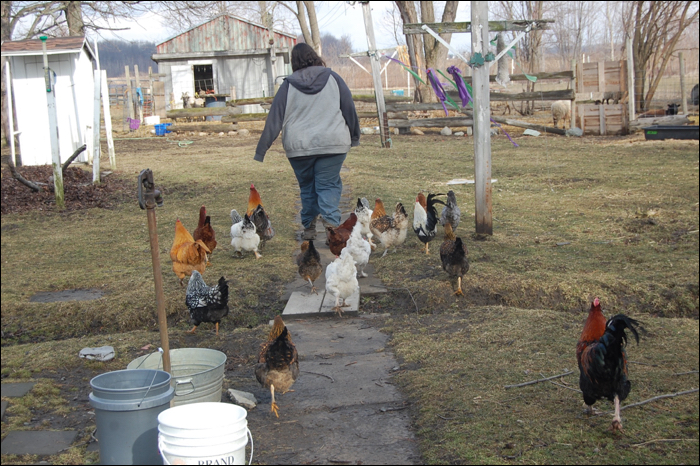 Well around our homestead, we put our ram in with the ewes on Thanksgiving weekend.  Since our sheep are mostly fall and winter breeding sheep, the act of introducing a ram to the flock makes everyone twitterpatted and within a week or so, they start to cycle and think strongly about playing the hokey pokey with our handsome young stud, Lukkus the Finn sheep ram.  We leave to their business for about 6 weeks.  Since the girls cycle at about 21 days, that gives them several cycles to be interested and hopefully bred.  So far, we’ve had a 100% success rate with this system.  We are hoping that this year, we will be in the same boat! 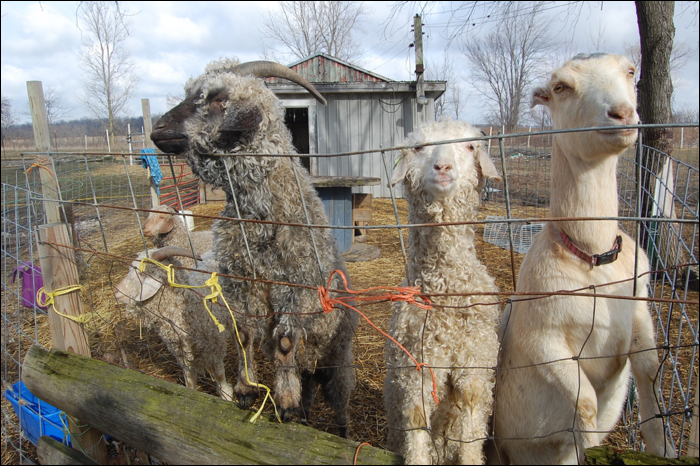 Now, we didn’t bred any goats this year.  I think we’ve got plenty.  And besides, we haven’t had as good of luck with goat breeding for some reason.  Just ask Buttercup, she will describe the horrors of goat delivery to you.  In vivid details. 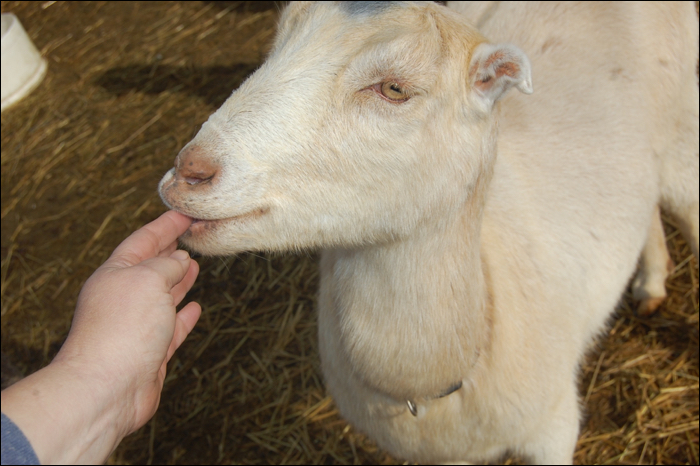 (She still has bad memories and needed a little reassurance from her goat mom, me…  She likes to lick my fingers.  She’s weird like that.) 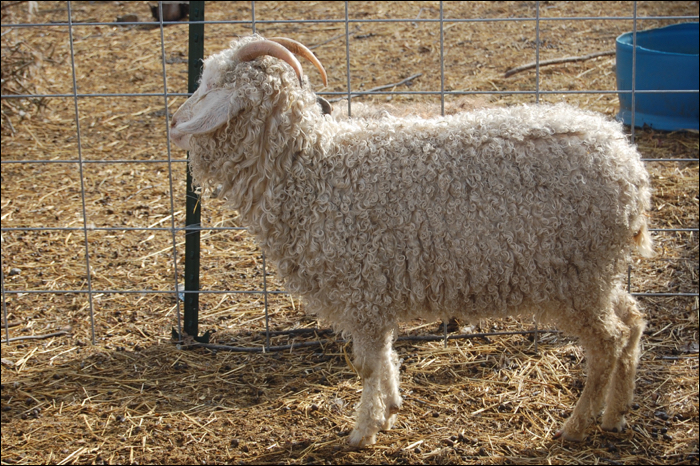 And we had a bad year with our angoras, last year, they got a little skinny under all that pretty fiber and just didn’t thrive as well.  Angora goats are a little fragile, you really have to keep a good eye on their condition.  We found that they were competing a little too much when they were in with the sheep and we had to separate the species.  It’s done wonders, Miss Rana, above, looks so much nicer now, her fiber is beautiful and she’s filling out nicely.  No more gaunt goatie!  It’s something that you just learn and get better with.  Being a first time farmer in several generations of my family, there is a learning curve to everything.  We try our very best.   Perhaps next year I will consider breeding goats again, but not this year. 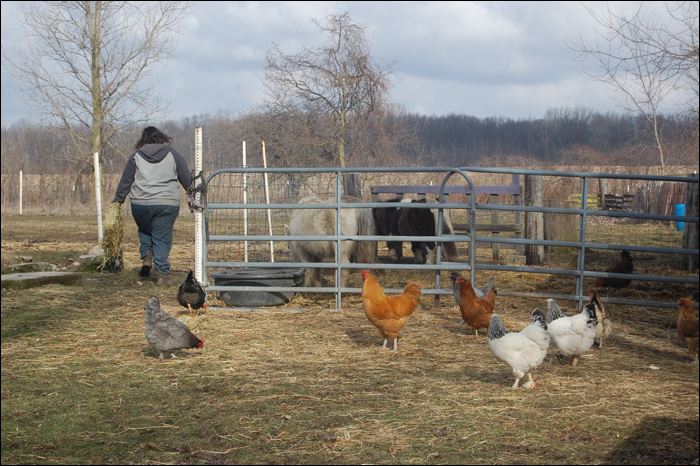 It was sure nice out…  just a few pictures of the chores before we began the ram swap out.  The ponies are doing, muddy, but well. 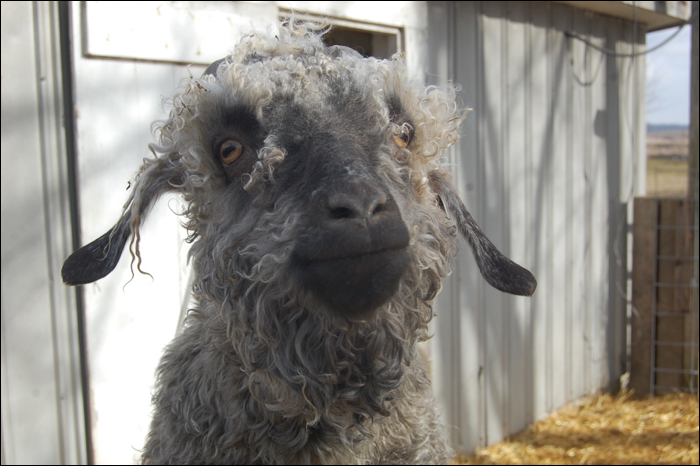 All the goaties are enjoying their hay… 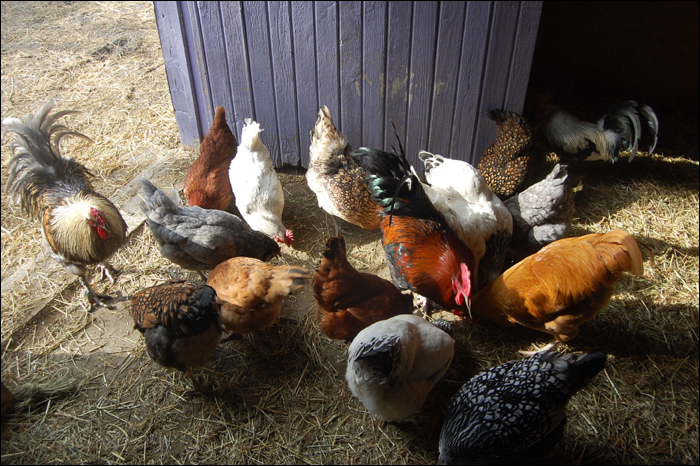 Don’t we have a lovely flock of chickens?   They are so ready for spring and bugs!!!

Well, part of the day’s activities were to swap around sheep.  Up in the front pasture, we had four sheepies.  Angus, a whether, Bonnie and two young ewes, Raspberry and Rosemary.  I decided they were too little to bred this year.  Sheep can breed early, but it really depends on their size.  You just don’t want babies having babies, so to speak, unless they are ready for the task at hand.  The only yearlings that I allowed to breed this year were Bonnie’s two girls, Willow and Laurel.  They are big big big…  nice strong strapping gals.  Because of their unknown family lines through their mother, Bonnie, I think they will be fine with our smaller ram and lambs.  And I’m not sure that would be ready or not, so I left them in and we shall see if they were willing to give motherhood a try.

The trick was going to be, how do we move these four back to the sheep paddock and remove Lukkus and his two buddies, Huldur and Fennil?  We didn’t feel like chasing everyone around and man handling them.  Too cold and too much work.  So.  We got out the trusty grain bucket and let Angus and his herd into the middle yard.   Bonnie and Angus knew the way to the back and followed Maggie eagerly.  I suspect they hated babysitting the two little girls.  I know Angus missed his women and Bonnie missed her daughters.  They were no problem.  They pretty much hustled right over to the gate. 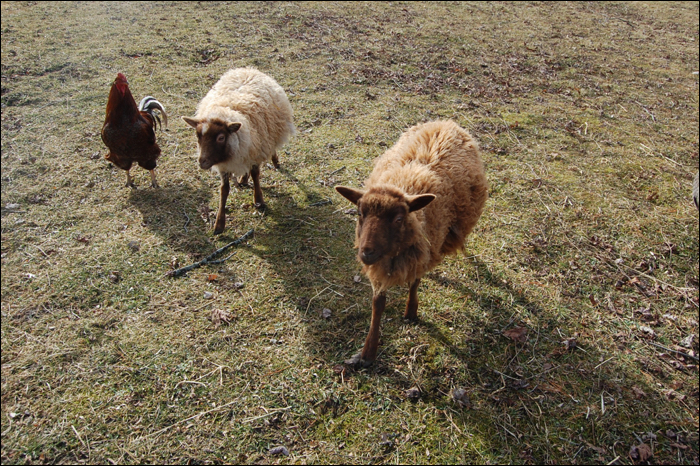 Rosemary and Raspberry were not so sure.  They had been weaned from their mothers and just felt the world was different now, and they were not so sure.  I had to slowly walk them over with frequent nibbles of sweet feed.  They are adorable.  I love their coloring.  They will make beautiful yarn some day soon.

We mixed the four back in the flock and then one by one we grabbed the bewildered boys.  Lukkus was very unhappy to leave this new found sport.  But when I got ahold of him and escorted him out into weed patch, I could tell, he had lost a little weight and was ready for a break.  There are instances of rams dying when left with ewes too long.  They get so focused on their job that they forget to eat and take care of themselves!  I think as soon as he gets a little down time and some extra groceries, he will be just fine.  Huldur and Fennil were just as confused.  They are whethers, fixed boys, but they are Lukkus’s companions.  The little threesome keeps each other company. 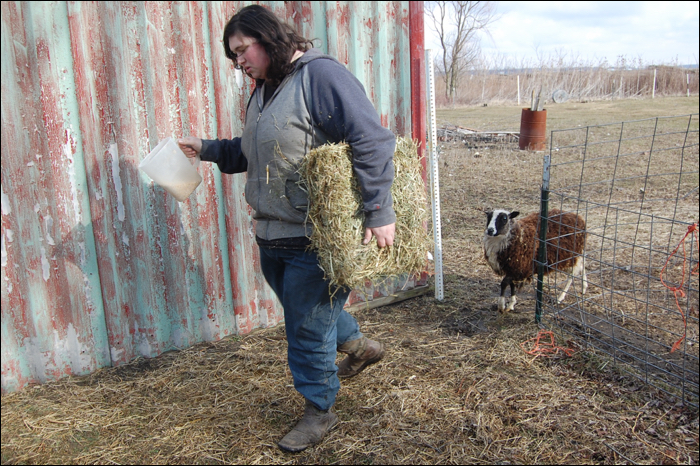 Lukky was ready to follow Maggie, his beloved food lady back to the ram field.  He’s a pretty smart little boy.  However, the other two were being dolts and couldn’t figger out where the gate was again. 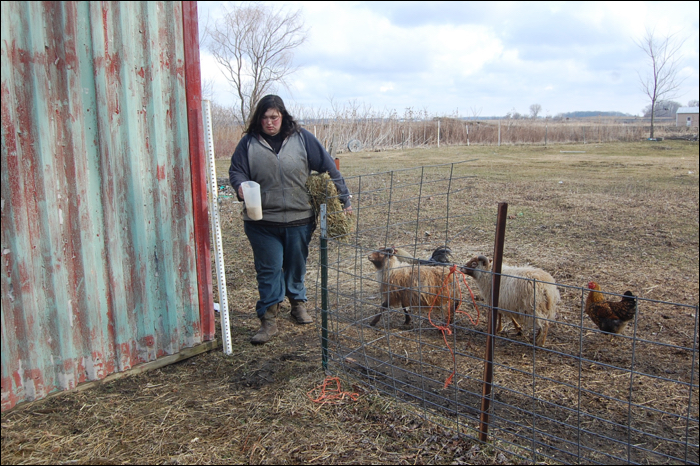 Maggie had to go back and round them up again.  We probably should have brought Evee out with us, but we didn’t want to scatter everyone if she made a wrong move.  She is getting better all the time with her herding skills, but she is not perfect. 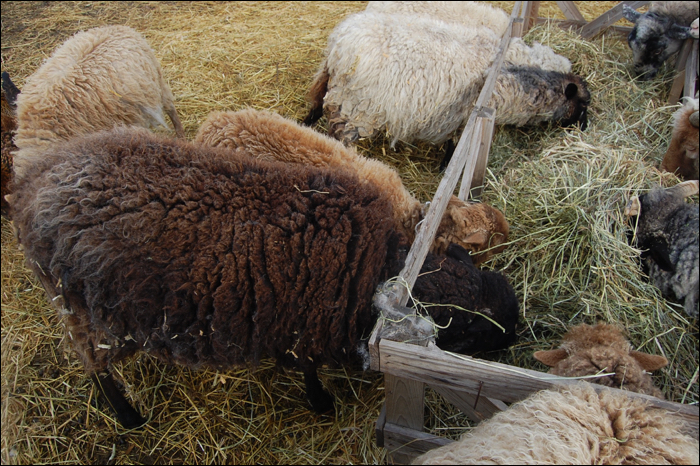 The best part of the day, aside from the fact that it went VERY smoothly, was that Raspberry got to go back to her momma, Pearl and Bonnie was reunited with her dear daughters, Willow and Laurel.  Raspberry and Pearl spent a few moments sniffing and tail wagging, a little head bumping and then dug into breakfast hay, side by side.

Bonnie laid out her long and mournful sounding baaa when she saw her daughters and they rushed to their momma’s side.  They pressed on her flanks and she smelled and licked them, tails wagging.  It made me cry, but it just had to be.  Bonnie is of questionable age, so it’s not good to breed her.  And her weird make-up is just not really the best to be sharing over and over with the world of sheep genetics.  However, her daughters seem to be favoring their Shetland father and have some nice wool.  I am giving them a chance to see what might come of their lambs, bred to a Finn ram.  We might actually have some beautiful fiber babies! 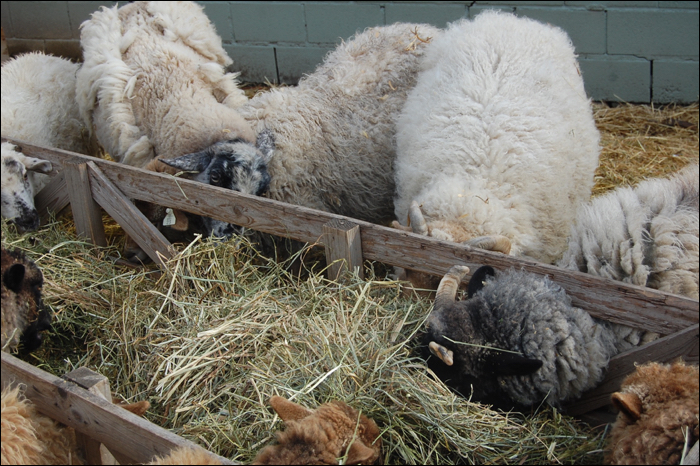 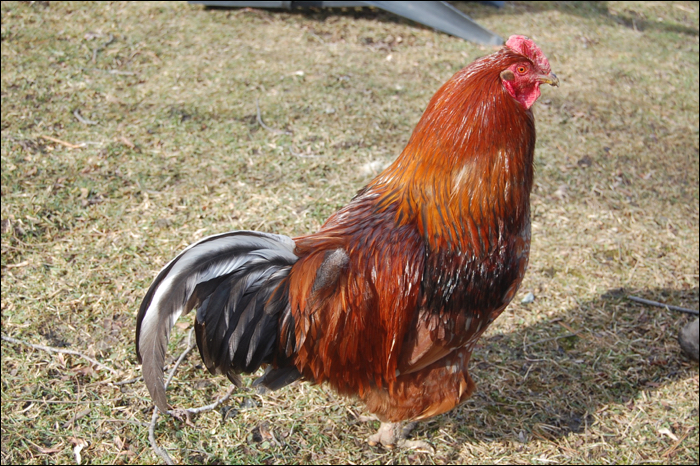 Good old Copper…  he’s the oldest chicken on the ranch!  (Well, that we know.  We hatched him the first year we were here!  He’s four years old.  And a first son of our beloved foundation roo, BuckaRoo…  Copper is sort of a long wolf of roosters now, preferring the company of hogs for the most part.

Duke kitty just loves to have anyone outside to cuddle with.  However, being a barn kitty, he has his limits and about 10 minutes is enough.  Still, he does enjoy the attention.

All in all, our ram swap went so smoothly, it was like we knew what we were doing!  I guess after a couple year, we should.  I’m very excited about our impending lambs…  we have another 6 to 8 weeks, however, but time will fly!  Should be exciting.  If you’re keeping track, here are the girls that were in the fall breeding group…

If they all have a single, that will be 8 lambs.  Our twinning rate is about 50%…  So that would mean 12 lambs.  However, Finn sheep are well known for their multiple births, up to nine babies from one momma!  We only have one Finn ewe, Miss Lydia.  However, since Lukkus is a FInn ram, that could increase our twinning rate and we might even see a triplet birth!!!  Wouldn’t that be amazing.  So I guess, if all goes well, we could have between 8 and 72 lambs!  Haha…  I am going to bet on 16.  For the year 2016.   Twins for everyone!  We shall see!  Our earliest delivery day in the last three years has been April 10th.  50 days away!  Stay tuned!