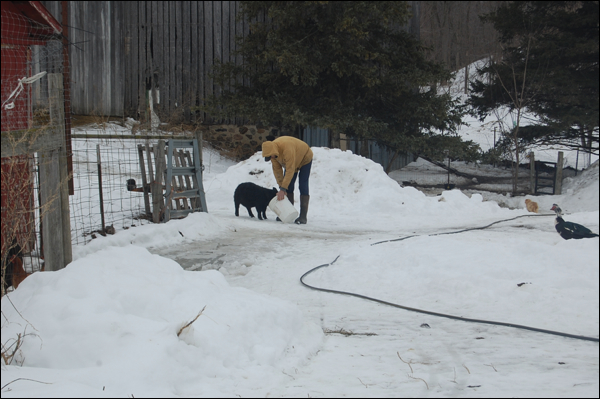 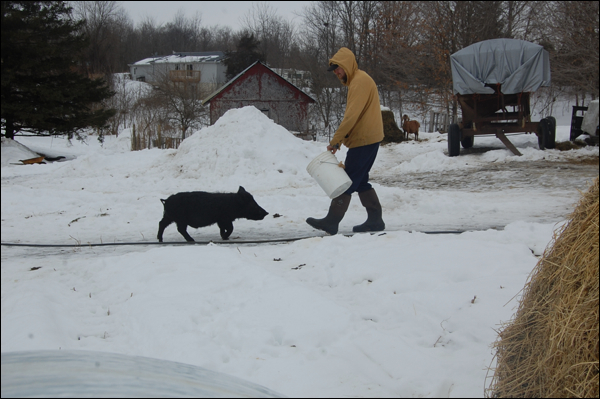 Our stud boar Onyx has been visiting some other fine ladies for a few months.  Being a endangered, heritage piggy, he is in big demand.   Partially because he came from a line of American Guinea Hogs in Illinois!  He’s unrelated to any of our area girls except for one very far out Great Great Grandma.  That’s pretty good in a breed that there were only 2,000 left about 5 years ago!

But we wanted him home…  to help our two sows to become mommas and give us some springtime litters of piglets!   Who doesn’t love piglets!   So we loaded the van with some piggy goodies (i.e. donuts)  and when to fetch him.

Sarah and I talked about several different plans of attack to get said hog into our van and home.   Of course, my plans kept getting more and more elaborate!   Just seems that nothing is easy around the homestead, ya know.  But Mike had a plan that involved very few moving parts.    Hog, bucket of corn, van.

And wouldn’t ya know?  He accomplished the task in less than five minutes.   Without any squealing or anyone upset.   In fact, Onyx had a pretty good time sitting in the van, going through everything including my purse, while we took a little tour!!!!    Haha….  silly pig. 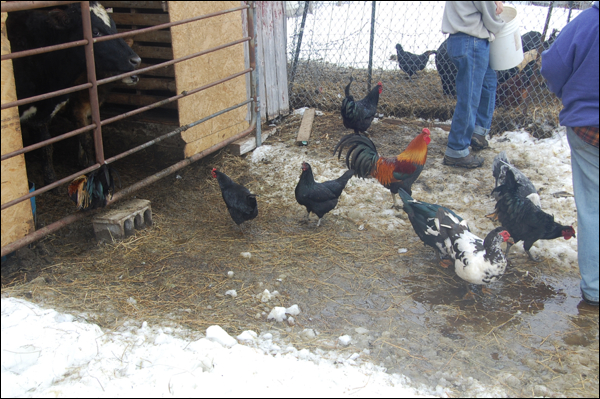 They have the most beautiful roosters!  And some very pretty ducks.   It was fun to watch the ducks splash around in the COLD water puddles! 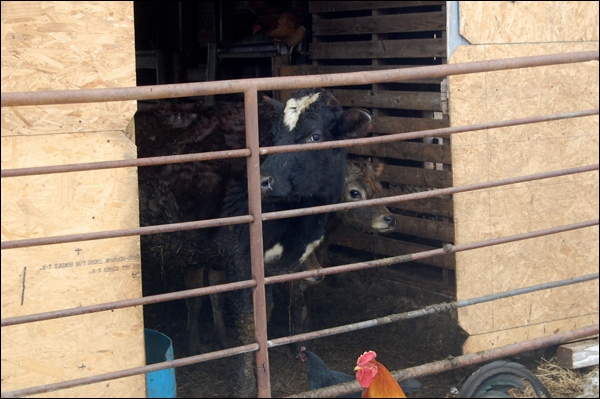 They raise Jersey cows and this momma and her baby just stole my heart.  Something about cow’s eyes…  they are so soft and appealing to me.   Maybe some day! 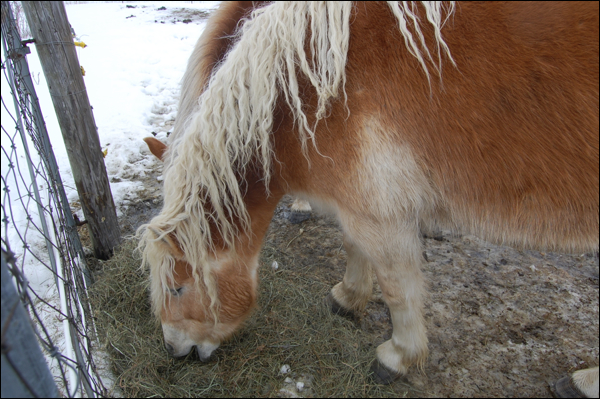 Sarah has six beautiful equines right now!   And this Haflinger mare is like a SUPER MODEL in the mane and tail department!   I wish my hair was so pretty!   This little filly below was cute and timid, but liked to get a little hay treat!  So pretty…  Some day I would like a real bonafide riding horse!   Someday! 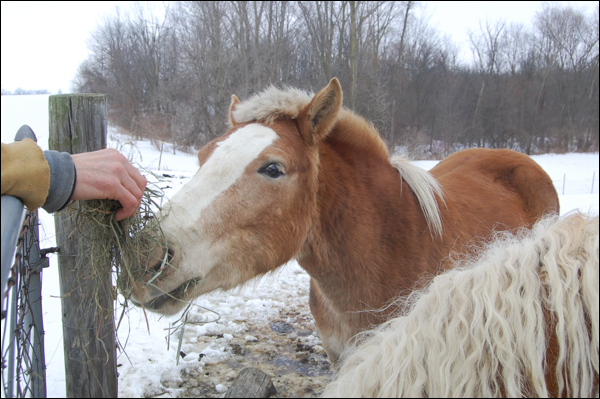 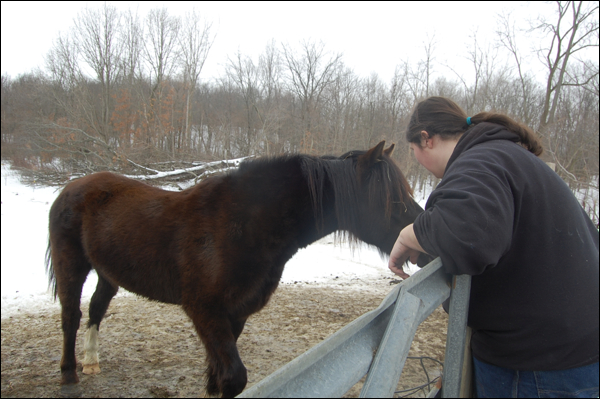 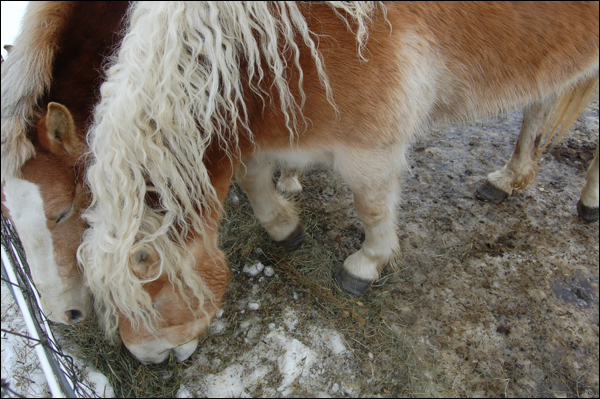 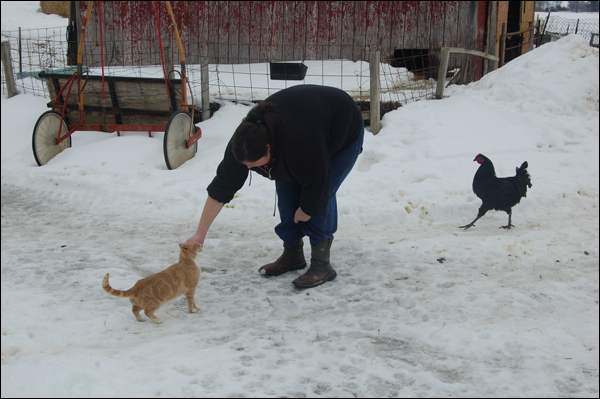 If you haven’t noticed…  Maggie makes friends where ever she goes.  Especially critter friends.   Butter, the cat, really enjoyed her shoulder for a ride around his farm! 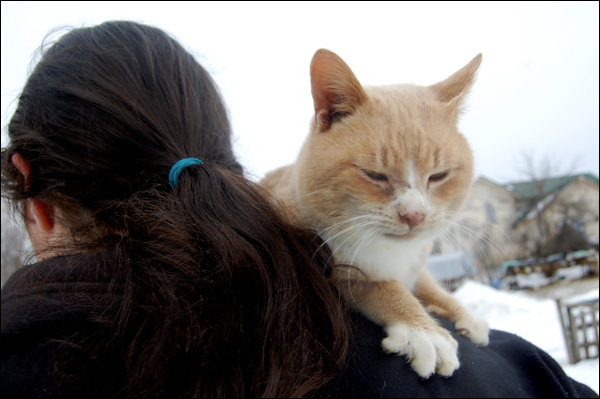 These two kitties were funny…  playing king of the round bales of hay! 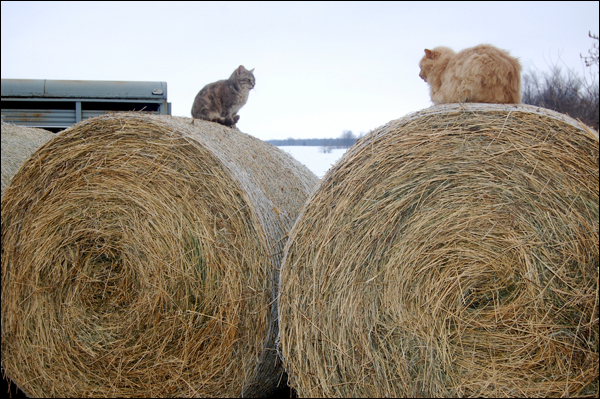 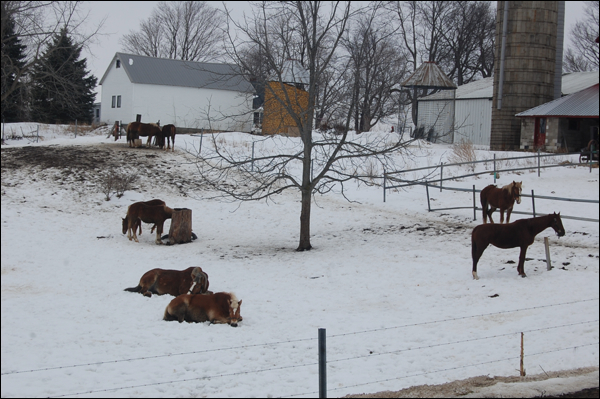 Once we got back on the road, just a mile or so away, there is a Amish family and it was neat to see all their horses out lounging about…  it was Sunday and they all get a little rest and down time.  Just neat to see. 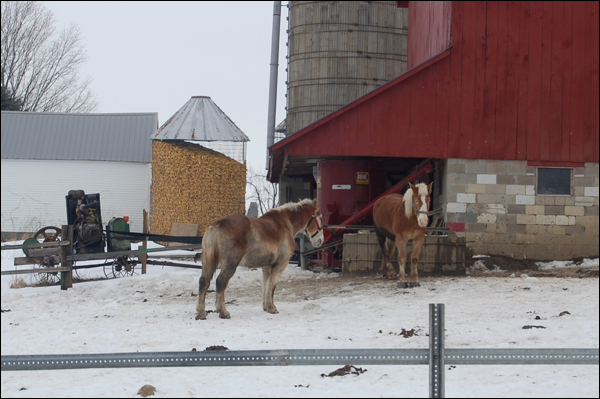 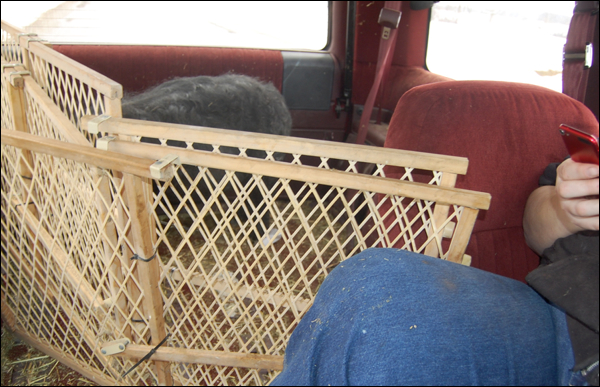 Onyx was a pretty good riding companion.  He snorted a lot and I think he was complaining about the lack of in flight movies and snacks.  He ate his stale donuts right away.  I guess hogs are not known for self control. 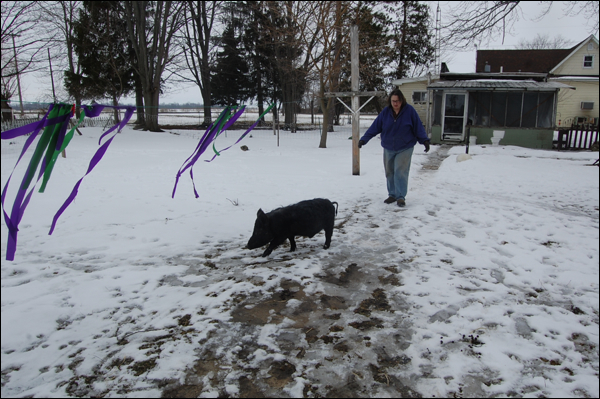 Maggie just picked him up from the van and carried him a short bit to the courtyard gate and let him into the middle yard.   He was pretty fine with it.   Have I mentioned how much we love these American Guinea Hogs for their fine temperment???  They are awesome!   We let him wander about a bit, sort of remember where he used to live and all.   He just sort of followed us around and checked out all the various animals.   It was very funny to see the flock check him out.   They were sure wondering what the heck he was! 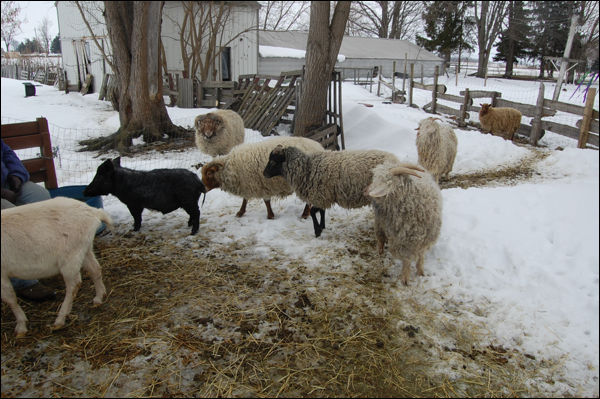 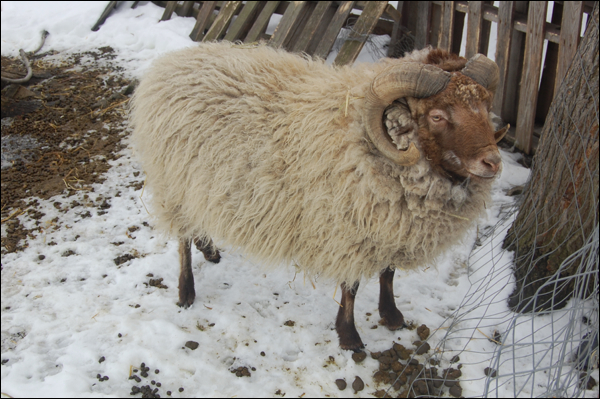 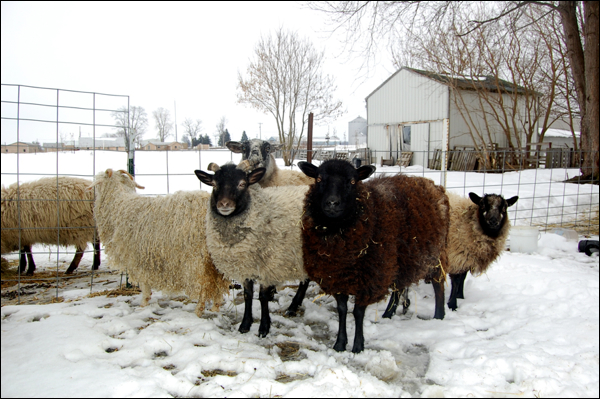 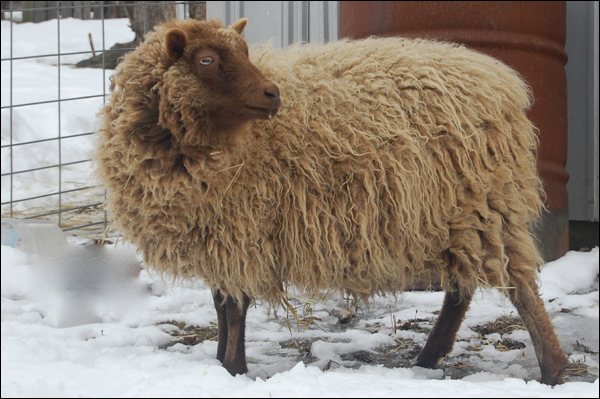 Beautiful Emma!   I just want to bring her in the house and spin right from those lovely soft brown locks!!!   Can’t wait till shearing time… 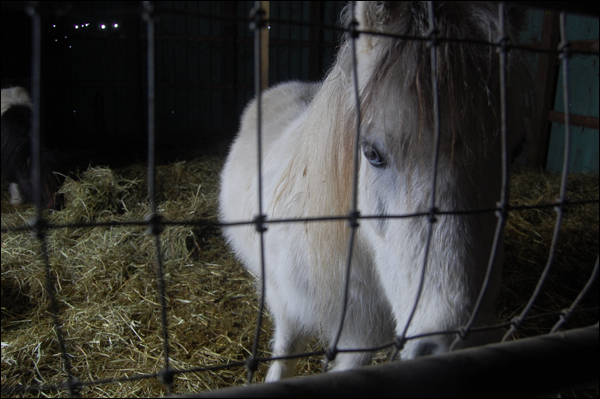 Shadow looks all sad and such, like he’s in jail or something.   Really, he and Cody are just happy to have their barn and pasture to themselves, finally.  Harley moved in with the flock…  (He kept leaping the fence to be with them! So we just let him hang for awhile until we can get his front pasture fence fixed…  another month or so…)  Now the ponies have their own home back and I think they are pretty thrilled.  They hardly leave the big barn much, because it’s lovely and warm and all the hay is in there! 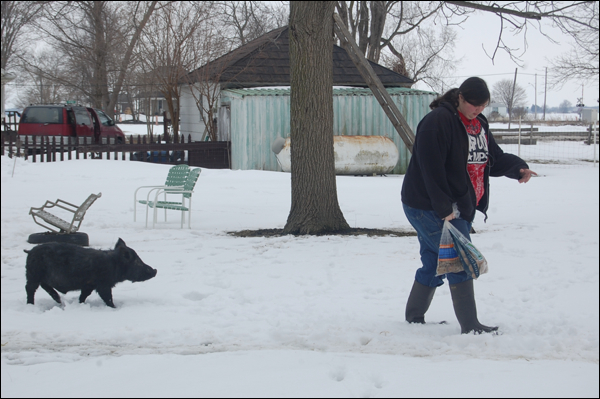 FInally it was time to go in and time to get Onyx back with his wife and other new wife.  He gladly followed Maggie when she brought out some kitchen scraps to give everyone as a welcome home party gift.  He was pretty interested in our two girls, Ebony and Shawnee.   He and Ebby have had a litter and all, but not Shawnee.   She is Ebony’s daughter from her first husband, Harry.  She and her mom will be our foundational sows for our line of WIndhaven AGHs… 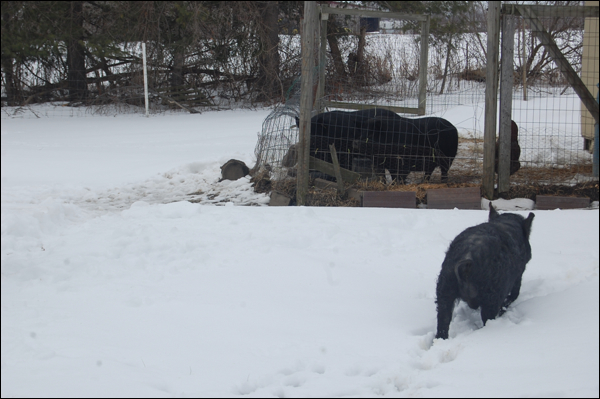 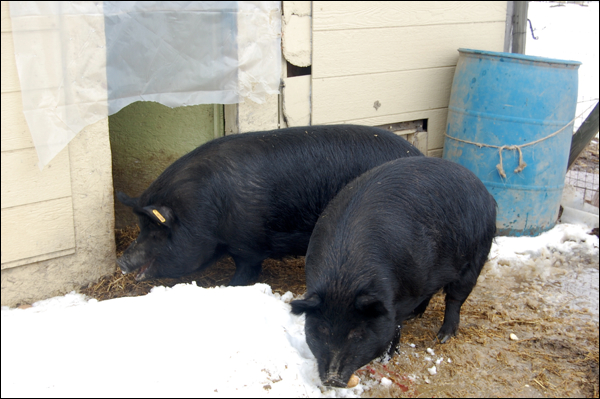 Well, we lifted him in and immediately Ebony was right there and gave him a firm talking to and a bit of a fussy fight.  It involved a bit of blood and some serious squealing.  It was over as quickly as it happened and she walked away, ticked off and apparently interested in the scraps more than her wayward paramour.   He ran off to the back side of the pig pen and just sort of acted invisible for a while.  It was mostly for posturing and show, because she just left him alone afterwards and he, she.  Shawnee was kind of in the middle of it all.   She gave him a little fussy worry but it was nothing like her mom.  And in fact, after an hour or so, she was being a little more polite and inquisitive, sniffing and softly grunting to him.   She came around much faster than her mom, whom apparently held a grudge for about a good long day.   After all, he did leave her to go and stay with her litter mate sister Guiney!  And now he just shows up again?  All hugs and kisses?   Well, sorry buddy, she ain’t falling for that.   I think he should have brought some candies or something.

Maggie checked on them later that evening, because we were a little afraid that Onyx would be sleeping outside!   But thankfully, the mean girls had allowed him to come in and sleep in the corner. Of course, no where near their beautiful big soft hog nest they have made in the other corner.   But he was warm and in shelter.  He was very pathetic for a day or two, but we noticed today that he was right in the middle of the girls, shoulder to shoulder and they were all fine.  They were even letting him sniff around their business ends and didn’t mind   I think we will have piglets in the spring after all!   And Onyx may have to sleep with one eye open for a little longer, but everyone will be happy as the days roll on.