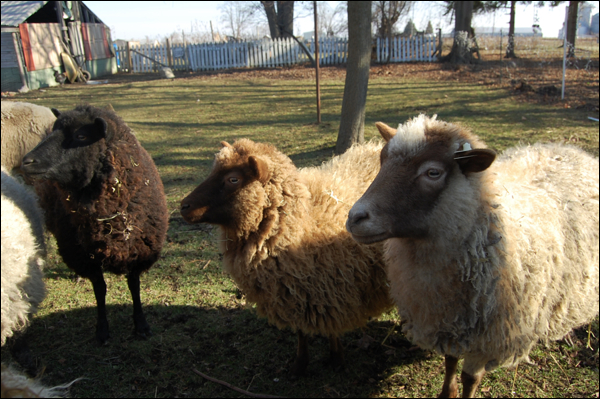 Right around Thanksgiving, we start to get ready for the sheep to go into breeding groups for the spring.  Last year, we had two rams, so we had more decisions to make in regards to whom would be best together and such.   For breeding strengths and nice color possibilities.   This year, we just have one ram, so the choices are more limited… to bred or not to bred.

I love that picture above.  The ewes are watching because they see all of us outside and the dogs. They know something is up.   Something is going to change… 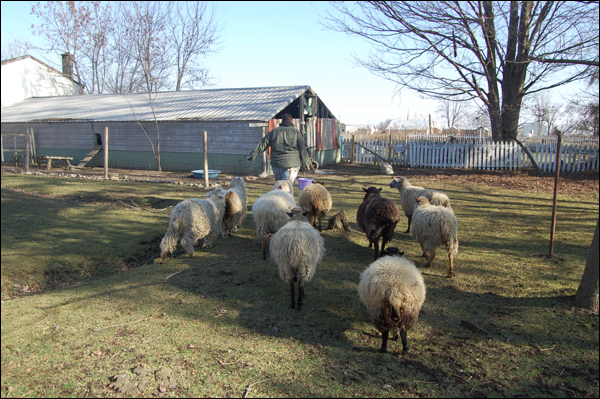 It’s so cute how they all follow Maggie around…  they are worried that she might stumble or fall or something with all that heavy feed and they want to make sure they can comfort her and help clean up any stray food.   They are nice like that.  So helpful. 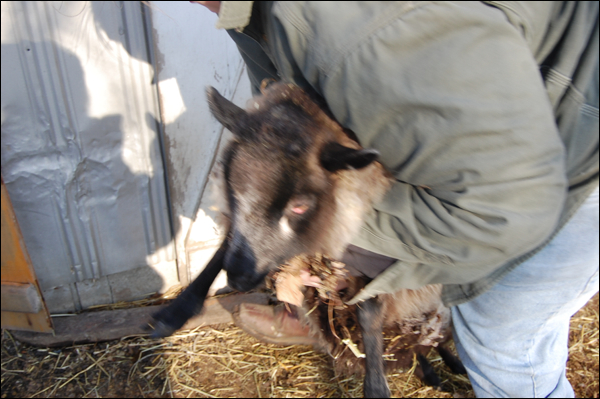 Since an ewe is good for breeding about 6 to 8 years, some folks will breed spring ewes.  They will be a year old when they give birth, but are about 9 months old or so in the fall.   We tried it once and have decided we don’t like to do so.   The maiden ewes are just not old enough and seems to have more complications.  They don’t make very good mothers and there are just enough issues that we don’t feel it’s worth it. If we had a big operation, running a lot of sheep, it might be worth the percentages.   But we’re just a small homestead flock, so we won’t bred the young ones ever again.

That being said, our only spring ewe is Galadriel, and she was NOT happy to be separated from her mother!  She fought like a monster!  Good thing Maggie is a bit more determined than she was!  But don’t worry, she will be hanging out with her grandmother, Iris, who is my best motherly ewe and very dedicated to her granddaughter.  And she can see and nose touch her momma Emma whenever she wants.   It’s only for a few weeks. 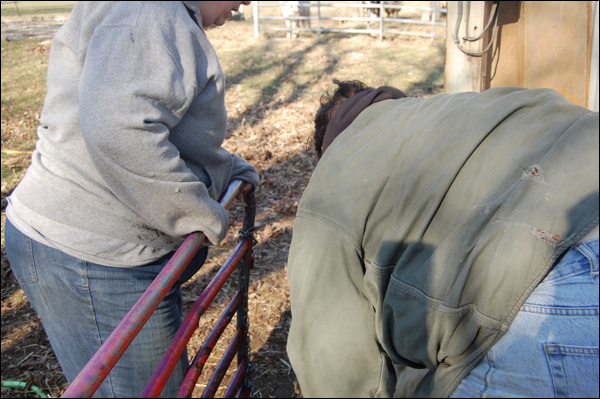 It takes all hands on deck to deal with a bunch of twitterpatted ewes and one big horny ram.   Once the sheep and goats know something is up, they turn into very skilled and wily ninja sheep and are capable of performing amazing acts!  Jessy was manning the gate and keeping those in and those out as we needed.  Maggie and I were catching in the paddock and separating who was going where.  I only got a shot or two, because we were all involved!   Our hooved stock are very friendly, but once you start separating and grabbing them, all bets are off. 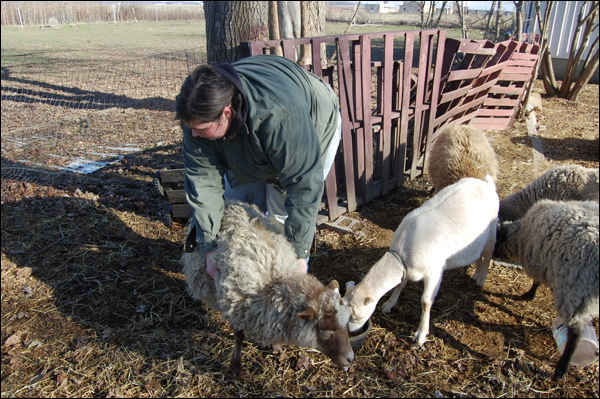 Iris is not going into motherhood this year.  She is taking a break this year.  Primarily because we don’t want to breed her to her son, Harley.  Again, some folks don’t seem to mind that, and it’s called line breeding in some situations.   But we just would rather not.  This is going to be our last year breeding with Harley as well, because he’s become too related to everyone.  Probably next fall we will either trade his services with another little homestead farm or he will be sold.  It’s a tough thing, but you have to be careful about your breeding and genetics.

Iris was also a little hardpressed this season with another pair of twins.   Since we don’t really know how old she is, I thought a year off would be a good thing for her.   Raising young is a hard thing to do year after year and she is such a wonderful gal, se deserves a year to just be grandma.   She will mother all the spring lambs just like they were her own and her body can have a good rest! 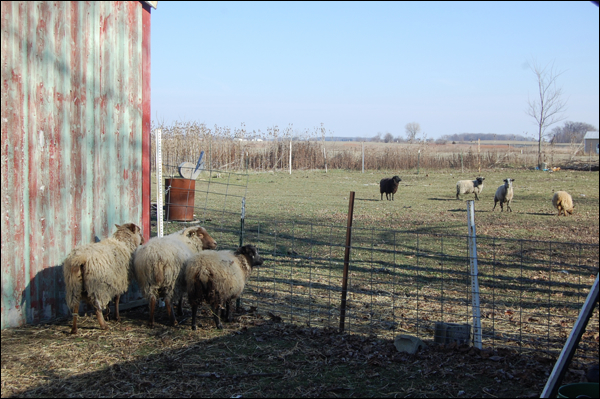 So sad…  the breeders and the non breeders…   Of course, Angus, as a whether (fixed male) he won’t be able to join the fun.   And Iris and Galadriel are the ewes out of the dance.  They will be a little herd of three for awhile.  Angus hates this time of the year.   He is the flock’s year round protector.   He is their “man” and uncle to all the baby lambs.   He is gentle and yet firm.   He will stand his ground against the dogs and he teaches the lambs how to be around a “ram”.   And he grows a super lovely large fleece and is just my sweetest sheep.   But when he looses half his flock to some big old lazy ram, he takes offense at it.  For a few days, he will sit at the gate and just bawl like a big baby.   He hates when his family is split up.   Eventually, he resigns himself to the fate and will be content with the few he has left, but he is really excited once they all come back to his fold.

He takes his job very seriously as the herd leader. 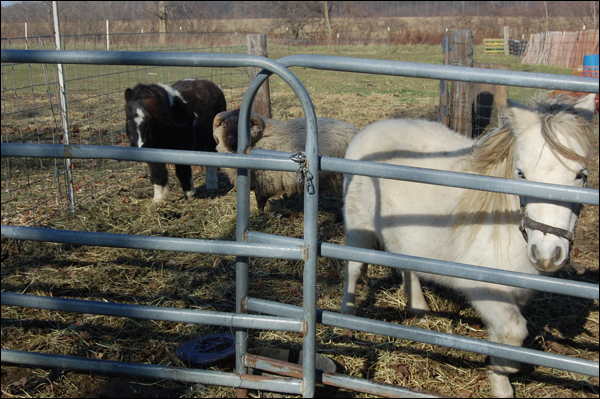 The ponies were very angry that we did not feed them first.   They usually get fed first in the morning, but because we wanted to lure everyone into the paddock to sort them, we fed the sheep first.   Shadow was so funny, stomping his little hoof and whinnying.  He was very displeased.  I’m pretty sure if he could write a letter to the editor, he would have.  They are all so chubby and fat, a few minutes delay is not going to kill them!  Haha…  silly boys. 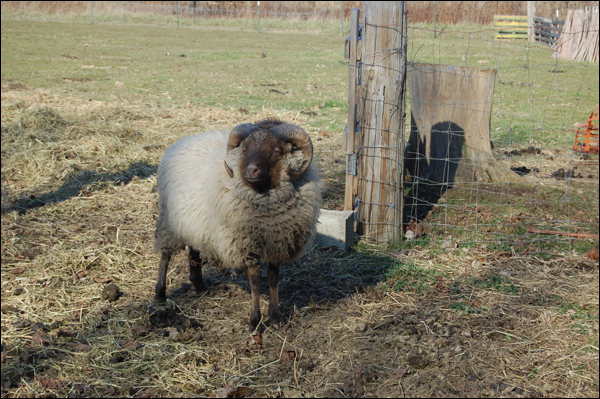 Mister Stud Buddy of the Year…   Windhaven’s Harley, 2012 lamb ram, all grown up!  I must say, he is one handsome devil.   He grows a beautiful fleece and has a lovely horn headset.  He is gentle, but not tame, just a perfect ram.   We have not had any issues with him.  He can be handled, but you still respect him and the powerful punch that he can pack.  He’s been bunking with the two ponies in the big back pasture and weed lot.   Plenty of space for everyone to behave.   He was up in the front pasture, but that pasture needs some serious fencing attention and we can’t do it right now.   Come spring, hopefully, we can get it all nice again! 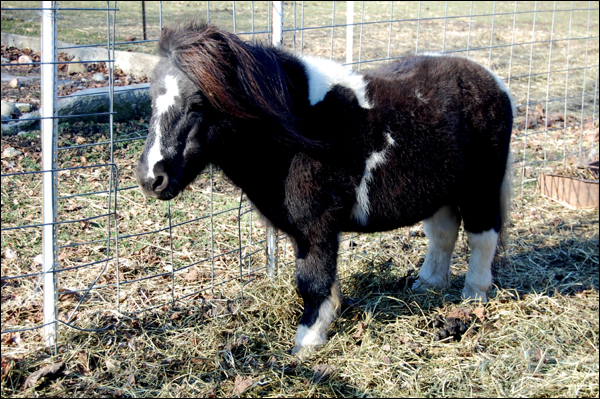 I love the ponies in the cold.   They turn into fuzzy little bears!   So cute…  Cody Pony is waiting much more patiently than grumpy Shadow does.  He knows we would not forget.  He’s just so cute… 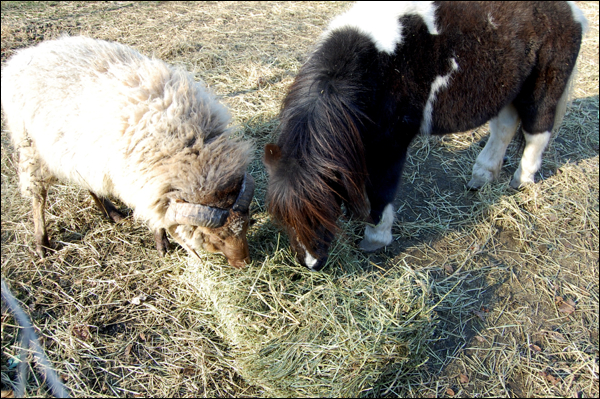 You can really tell how little Cody is, or how large Harley is, in this picture.   They are sharing a little hay before we nab the ram and take him over to the girls. 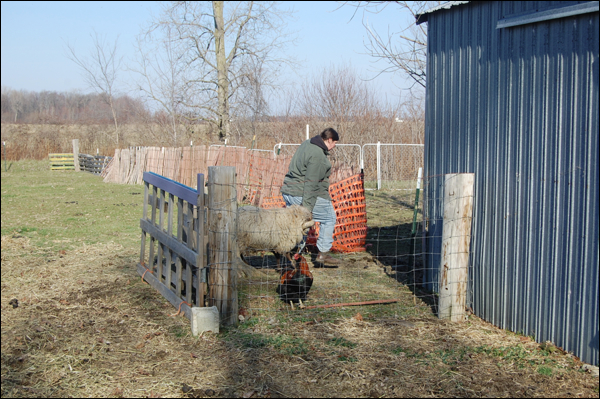 Maggie is taking sheep courtship by the horns!  It’s always funny to imagine what Harley might be thinking…   “Hey, I was eating, what the heck, where are we going, I’m busy today…”   and then when he sees his new dates his whole attitude changes!  “Oooooooooh!  Ladies!!!   Oh darlings!  I seeeeee!   Let’s get to know each other!!! Do you come here often?” 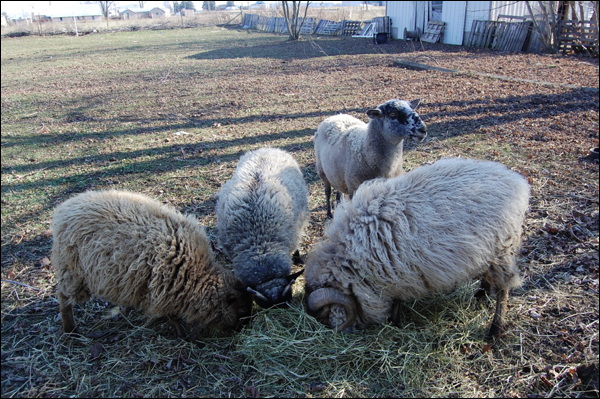 Of course, at first, he is mostly interested in their hay.  After all, it might be special hay, or like different hay then he was just eating.   But it is only him being suave and debonaire. 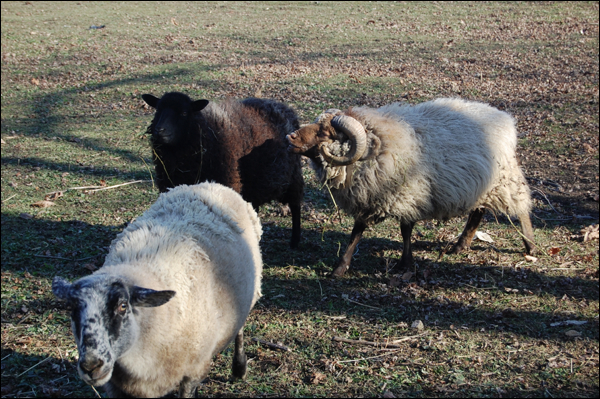 Pretty quick, he got to the business of checking out his ladies and seeing if just maybe anyone was ready to do a little hokey pokey.   Which, apparently, none were.  They pretty much just got chased around and did a little head butting and kicking to tell him to get lost.  The ladies this year will be Emma, Pearl, Beulah and Bonnie.  Three shetland ewes and our rescue half mix ewe Bonnie.   We hope that this year she can have a much better opportunity with motherhood.   She lost her lamb to our visiting mule in a very tragic accident.  We want her to have another chance.   I hope and pray it’s a little ewe lamb for her so we can keep them together forever! 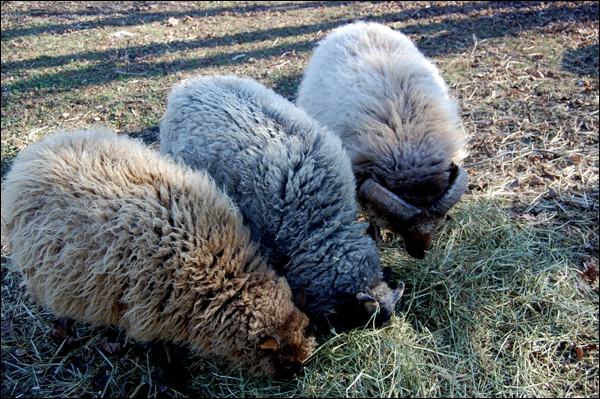 Such lovely fleeces!  This year, they are growing such beautiful fiber.   Can’t wait for a few more months and shearing time!  Can’t wait to wash and work with their wool…   oh boy!  Such beautiful colors too! 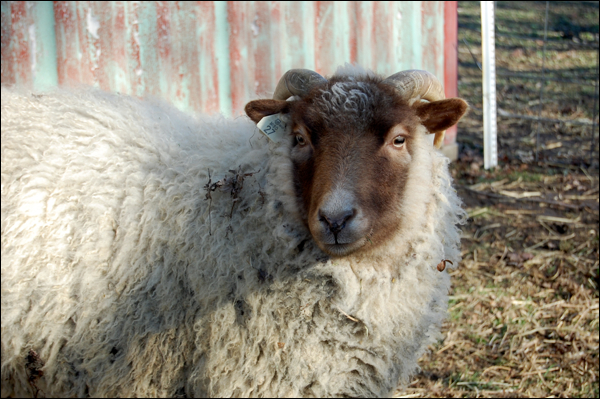 Poor Angus.   He is very unhappy at the moment. 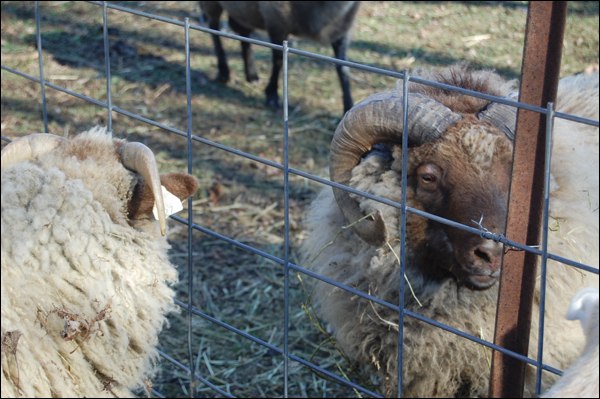 He and Harley having a few moments of confrontation through the fence.   Harley just pretty much ignored him and that was just a big dose of “you just don’t mean anything to me”.  Poor Angus added a firm head butt to the fence, but Harley had already walked off.   Poor Angus!   He will get a lot more treats and attention for a day or two until he resigns himself to the fact that things are to be this way for a while. 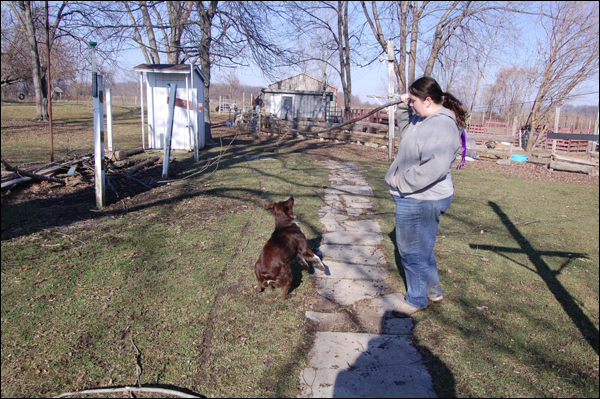 We had a bit wind storm a week ago and there are a lot of good sized branches all over.   Jess and Evee have been working to get some of them picked up and in our fire pit wood pile.   Evee loves sticks and is very helpful!   Okay, maybe not as helpful as she might be, since she loves to just take them back out of the pile after you put them in! 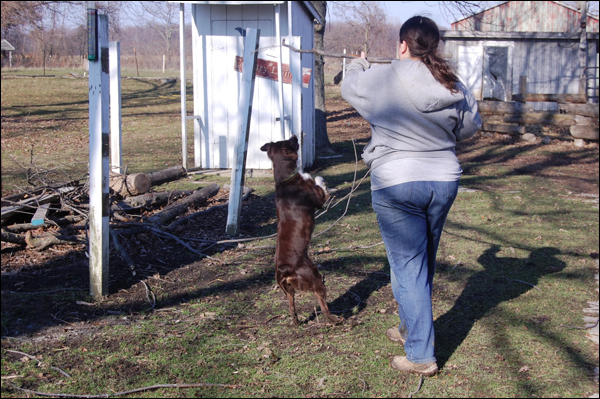 Ratchet is not into sticks.   He would rather just walk around and enjoy the nice day! 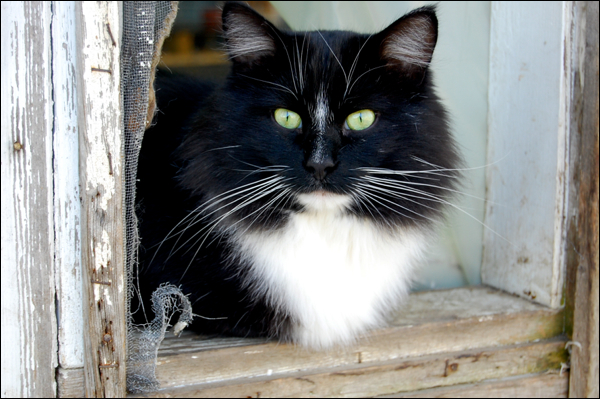 Duke kitty was just staying out of the whole mess.  Too much crazy stuff going on.  He found a cute little perch and just watched the whole show!   So pretty…   he is our outside barn kitty and he takes his job very seriously. 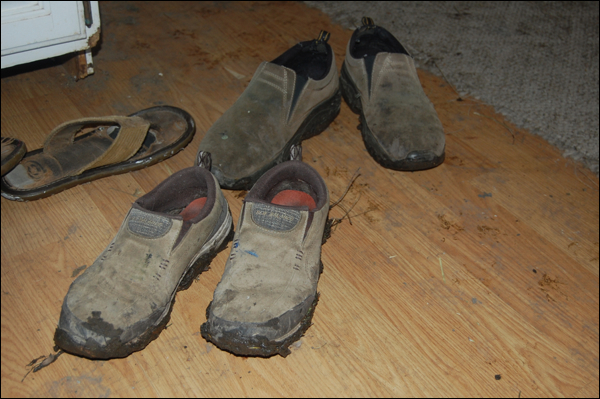 Not that I am complaining, but when we get these 50 degree days in winter, its so nice to be able to work outside without heavy coats and all..  but the problem is, MUD!  Just a walk about means you are going to have filthy muddy shoes in no time!  Would almost rather have the cold and keep the ground a bit frozen and less likely to come in the house!!!

Well, if all goes well, we we will have between 4 and 8 little spring lambs!  Both Maggie and I are predicting one set of twins and a couple singles.   That seems to be our record.  Never had triplets yet, but that’s always possible!  It feels a little weird to only have 8 sheep at the moment, but we had a good opportunity to sell a good group of sheep to start a new flock and with the budget being so tight and all, it seemed like a good thing.   It is much nicer on the feed bill to have half as many mouths to feed!

If you are wondering, we are not breeding any of the goats this year.   We have decided that goats are not our thing and we will keep with our little flock of fiber goats and of course Miss Buttercup!  Breeding goats was just not our cup of tea!   Both births were hard and difficult and resulted in two boys and that is not good.  One had to be bottle fed, when his mom refused him.   Goats are just not our calling!  Sheep are really what keeps us going!  We love them, easy to care for, easy keepers and hardly a problem at all for birthing.  Just so much easier!!!

Of course, that being said, goat babies are stinking adorable…   but that’s okay, we will have lambs and they are just as cute!!!