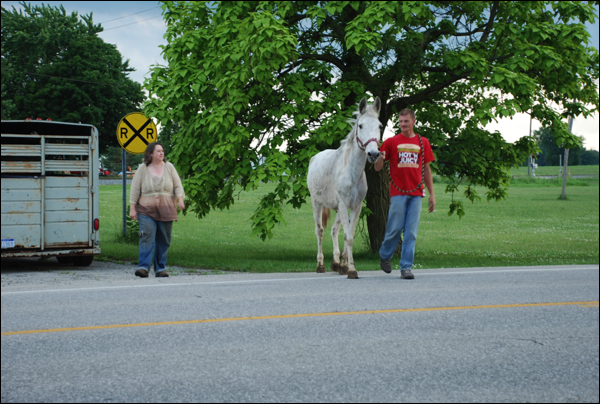 Jax belongs to our friend Justin.   And Jax was just being a mule and basically just pushing his weight around on the neighbor’s fence at Justin’s homestead.   They have a little over an acre or so.  And said infraction on the fence was not winning this sweet mule boy any brownie points at the moment.   Since the sherif was going to be getting involved, it was time to move the mule for a while while some fence repairs were made and some ruffled feathers were soothed. 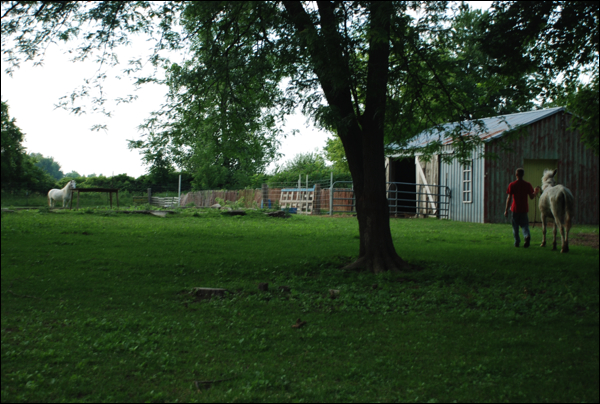 And besides, I don’t know about you, but I always wanted to be around a mule for awhile.  Just to see what they are about.  How they think, how to act around them and just to observe!   Sounds like fun to me!  I love equines!   A big old mule to babysit for awhile?  Sure thing!   Count me in!

Well, Justin brought him over and he trailered like a champ.   Justin got him a year ago from a kill pen buyer and saved his bacon.   He’s not terribly old, about 5 or 6 we guess.  He hasn’t had much training, however, not broke to ride.   He tolerates packs and such…  not sure about a harness yet.   One of those take it awhile and see. 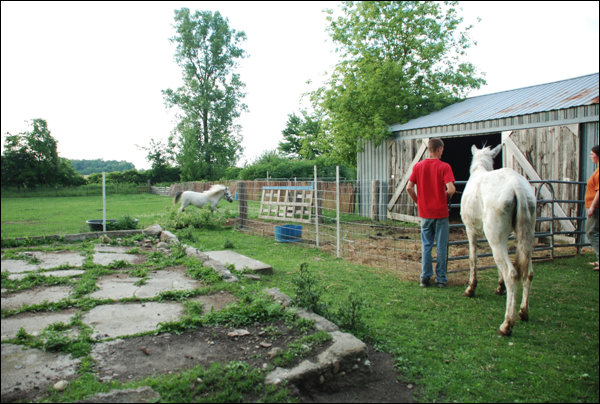 Shadow, Mr. Busybody, was the first to notice Jax.   And he came RUNNING!   Oh boy, oh boy!!!   A BIG giant horsey!!!!   He was ready to sniff noses and say hello and welcome!   Shadow is always ready for some excitement and he was pretty darn sure this big fellow meant FUN! 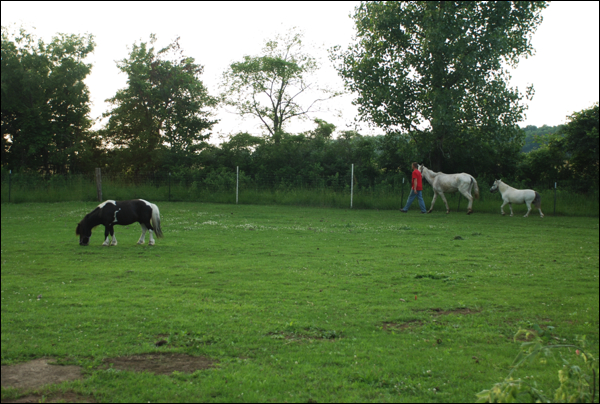 As Justin walked him around the pasture to get a good look around and to know his new permieters..  Cody pony was just ignoring us…  he had his blind eye to the bunch and was busy grazing.  It wasn’t until the rounded the far corner that he noticed the mule and he must have jumped a foot off the ground and gave out this HUGE howdy do whinney!    He ran over immediately to say hello!!!   Cody loves horses…  especially big horses.   He had a friend at his old home that was a fence away and I think that was what kept him happy and sane for six years of just sitting around pretty much alone in his little stall and pasture.    So, he was super ready to welcome a newcomer to the herd! 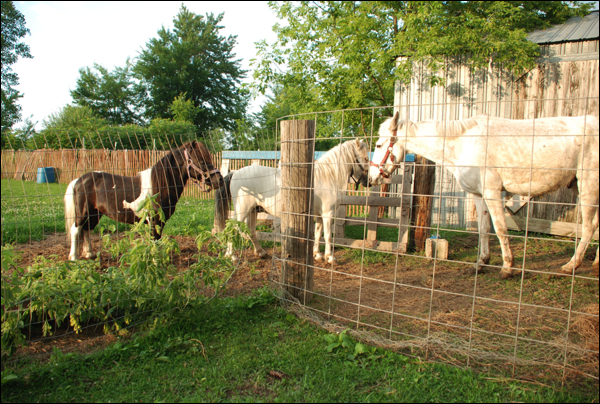 A friend said it looks like a recieving line at a wedding!  It does!

My little pony boys look like midgets next to Jax! 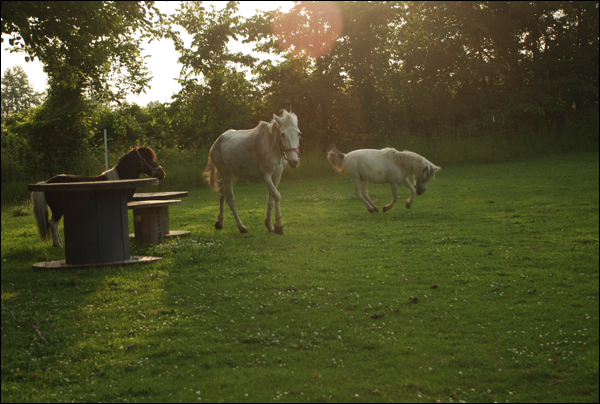 Shadow was so happy once we let them all out to do equine things.   He was flipping nutsy and so happy!  Frollicking and bucking and nuzzling and grooming and just having such a happy time.   Cody, being a little stud, was in his face and letting him know that HE was the king!   Of course, Jax could care less.   He was there for the nice big pasture and the grazing!

Oh yes, and a good roll in the evening sunshine! 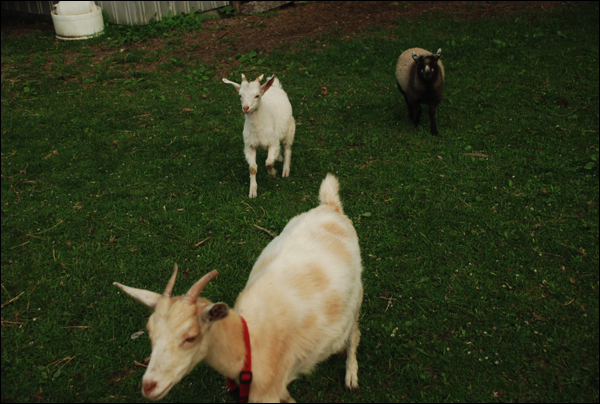 Everyone came running to see the new inmate! 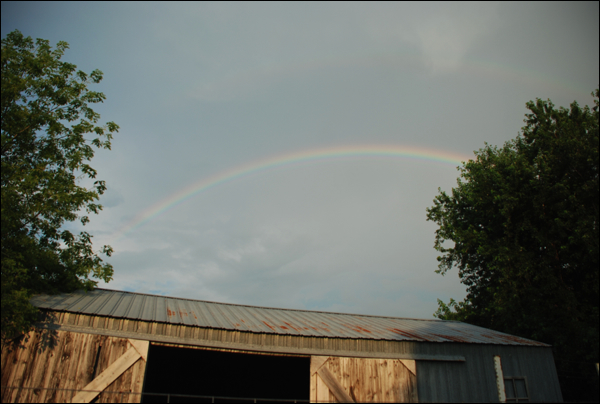 A rainbow over the big barn must mean this is a good thing.

Or it means that it was raining before and now it was sunshiny.

(Okay, okay, I’m trying to justify the need for a mule here…  work with me!)

I do believe my boys could walk under Jax’s belly!!! 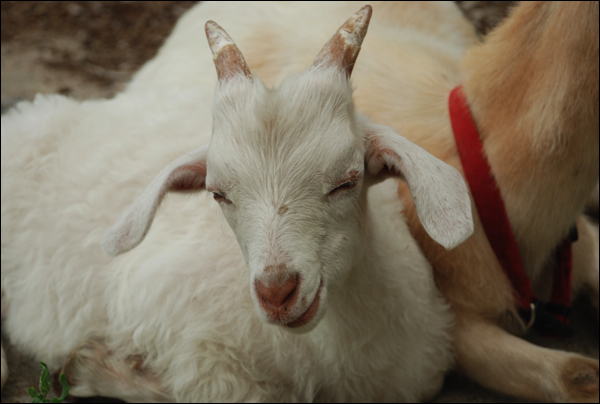 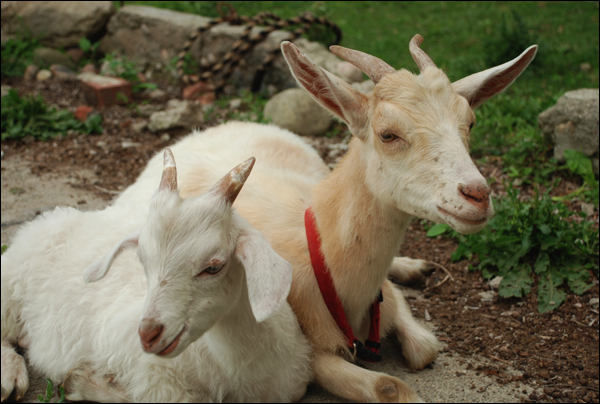 Daisy and her boy Jelly Bean.   They are so cute together.  Jessy was taking a few pictures with her new birthday lens from Grandma and Grandpa.  She is a happy camper. 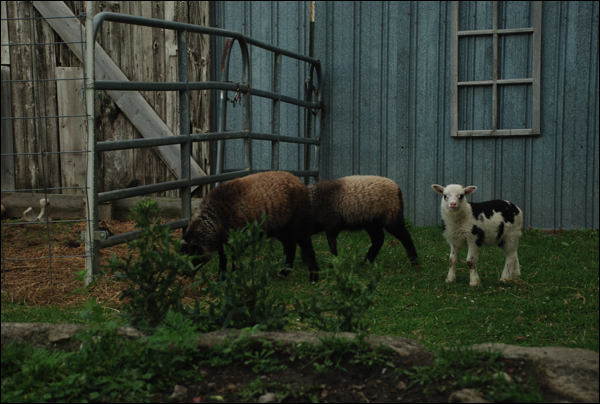 Little Frodo is sure coming along!  He loves to annoy his twin half sisters…    They are pretending not to notice him.   But he is sure to let them know he’s around.   He wants to play with them all the time!   He looks like a little cow!   So cute! 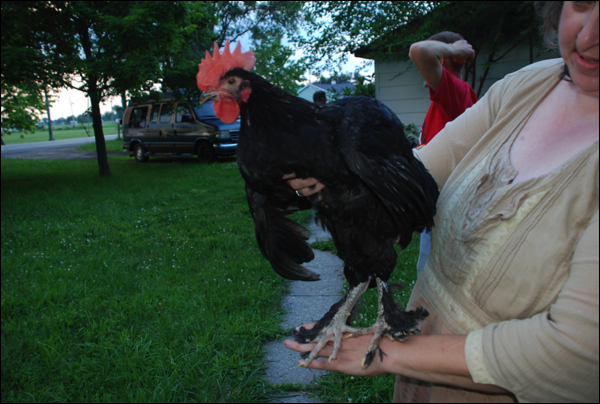 Justin took home a fancy Marans rooster with him.  I have a few extras and I thought it would be nice to share!   I almost have more roosters than hens at the moment and that is just a little goofy.   I really do love my roosters.   I believe I might need a 12 step program to help me deal with this addiction.  Roosters are so pretty!   And we raise some very very nice ones.  😉 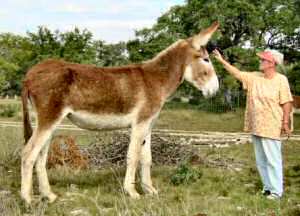 If you’re wondering…   a mule is the sterile offspring of a donkey male and a horse female.   Most mule daddys are from a mammoth jack donkey.   As you can see in this little picture, they are pretty darn big donkeys!  And its easy to see where Jax gets his height!  Since he’s got some spotting and such in his coat and he’s white…  his momma was probably either an appoloosa or a dapple grey in some manner.   He’s a handsome boy and very gentle.  It’s going to be fun to just hang out with him.

So, while Jax is here, we are going to spoil him and just enjoy him and observe his muley ways!   Right now, he’s not taking much cash to keep him in groceries…  he’s eating grass and a little hay like everyone else.   Not sure how long he’ll be here but I sure do want to give Justin a little time to figure out what would be best for Jax.  They are contemplating a hot wire on the fence line…  or some stronger, or higher fencing…  just not sure yet.  In the meanwhile, he’s more than welcome here.   It’s giving us a chance to deal with a HUGE equine!!!   Kind of see if we can manage, since some day we would love a nice old Haflinger riding horse to join our permanent herd!   It’s great training!