This last Wednesday morning, I was getting ready to go and do a few errands when I thought, I better check on the sheep and goats and especially Miss Bridget, who was round and uncomfortable the last few days before.  And sure enough…  when I called everyone, they all came running except one.   Miss Bridget. 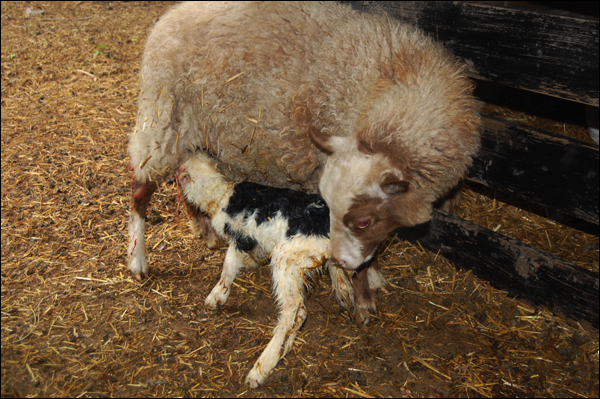 Well, I will admit, my heart dropped a bit…  what if she was in trouble, or had had a rough delivery and maybe even was gone…  I know Shetlands are very easy birthers, part of the reason we got into them…. but still, anything can go awry.  This is her second pregnancy, so hopefully she has some idea of what is up, but still, I was a little anxious. 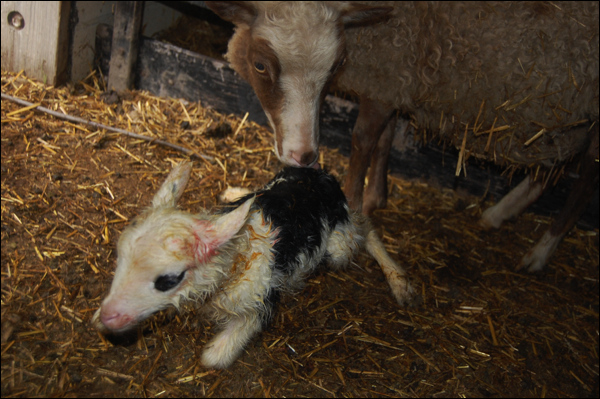 I noticed that the barn swallows were hovering by the doorway to the sheep barn, excited and trying to fly under the rain flap and unable to.   And then I saw Momma and her sweet little newborn son.   She had JUST had him, as he was still very yucky and she was licking away like nuts.   Everything seemed well and it took me about two seconds to realize we had a little ramling…  the little nubby horn spots on his forehead give it away quickly.   I still did a quick check underneath and sure enough, a little boy.

I had a little stack of old towels in the barn, waiting, and so I gave Mom a hand in wiped the little cutie pie down.   I can’t imagine how yucky that must be, to have to lick clean your baby.   I think if I had to to do that for my little bambinos…  I would have paid someone a good deal of money instead to do it for me!  (haha)  Bridget was thankful, I’m sure.   I warmed him up and scrubbed him clean for her.  I checked to make sure both milk spouts were operational and then I gave her a quick check to see that she was working on expelling the placenta.  She was and I knew we were done with the show.  It would be another single male for Miss Bridget, the late lamber!

Jessy says we need to put Bridget in with the rams about three weeks before everyone else!   I think she’s right.   She just doesn’t seem to approve of our lovely stud rams and holds out for someone better to come along before she just goes into heat for any good looking stranger.  She wants a date and flowers and long walks on the beach before she submits.  Okay, maybe not the beach thing, but hey, she sure isn’t one of those ewes that just can’t wait to get in the family way.    She likes to admire and consider the ram she’d like as her baby daddy.

She had been with Harley at first but escaped.  And ended up with Otis and his ladies.   Pretty obvious who the baby daddy is, eh?  He is the spitting image of Otis.   So Otis has now, four little babies in this world to carry on his legacy!  I really do miss the guy, he was such a cutie…   I think he would have liked his babies.  Three girls and a sweet little boy. 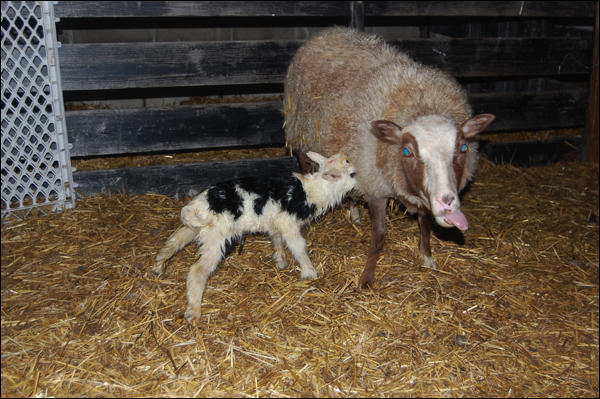 Well, since the girls were asleep, I moved them back into the lambing jug pen and got her some fresh water and a flake of hay.  Locked mom and son in the pen for the day to get acquainted.  It’s important for a ewe to have a little quiet time with her baby, to learn his scent and just get him used to being on the ground and having to stand and nurse and all those important lamb things.  And it gives the ewe and lamb a little time to relax without all the nosey busy bodies sniffing and head butting and jostling the newcomer around. 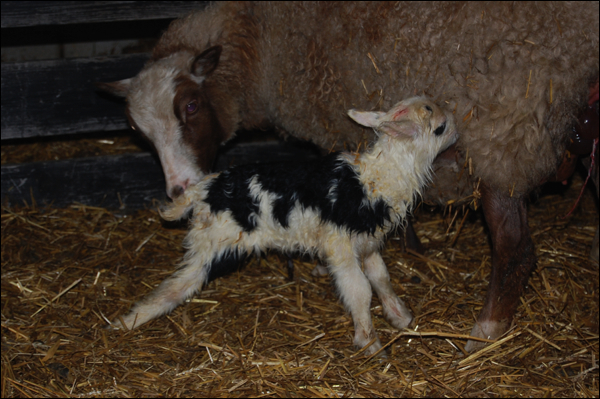 Frodo is his new name…  the last of our 2014 Lord of the Rings character named lambs.  We were a little worried if he might be a she…  there are not too many girl names in the Lord of the Rings!   However, I think if we had a girl, we could have easily named her Precious!   (Thanks Kerry)

They are all precious… our little bunch.   Five lambs this year and we are keeping them all!   No one is going to be sold or sent to freezer camp this year.   Five is a great addition to our flock.   We sold 11 sheep last year for various reasons (mostly budgetary)  and so that opened up spots for this year’s lambs.   Because they are all so beautiful and uniquely colored, I’m very excited to retain these babies for our spinner flock. 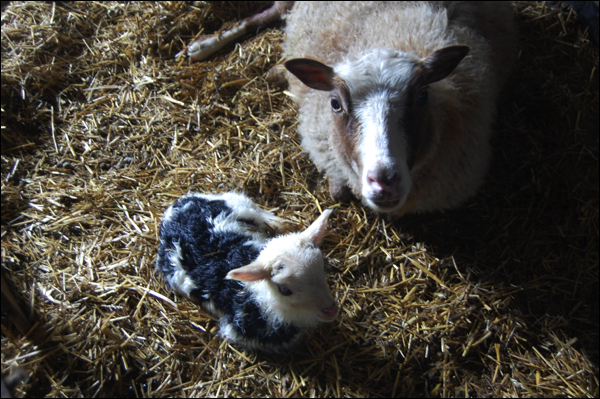 And by golly, they are just so darn adorable!

And thanks for having your little bundle of joy on Wednesday, instead of Saturday, which was Miss Emily’s wedding and we really wanted to be there!  If you remember, last year, she lambed right as we were heading out to our friend JB’s graduation party!  She does like to mess up our social schedule and as we waited and waited, each day last week…  I was so sure she was waiting for the weekend, since ALL our other lambs this year were born on a Saturday or Sunday!

I’m just glad she didn’t hold out for the wedding finery day!  haha…   Thanks Bridget!

And welcome to the world Frodo of WIndhaven Shire!