Well, as you might know, I love a good deal and just can’t turn down fancy organic, whole wheat, lo fat pancake mixes for only 75 cents a box!   I got three boxes…   and oh my gosh.   They were AWEFUL!!!  No one could finish our breakfast I made!   They just tasted like, I don’t know… cardboard or something, they looked okay but they were just not good.  Sorry…  We are pancake snobs…

So I didn’t want to waste the stuff, so I decided to just whip up all three boxes and give them out to the animals as treats!   Surely, they would eat them, they love whole wheat stuff and well, it’s pancakes!  How often do they get pancakes?

Well, it took me nearly an hour to whip up batch after batch of these bad boys.   I made them as big as I could flip and as thick as they would still work.   Nice and dense!   I even had half a can of sweetened condensed milk in the frig that was kinda getting old…  so I dosed each batch with a spoonful of that lovely sweet stuff.  I was ready.   Maggie brough me a big bucket and we filled it up with the lovely treats! 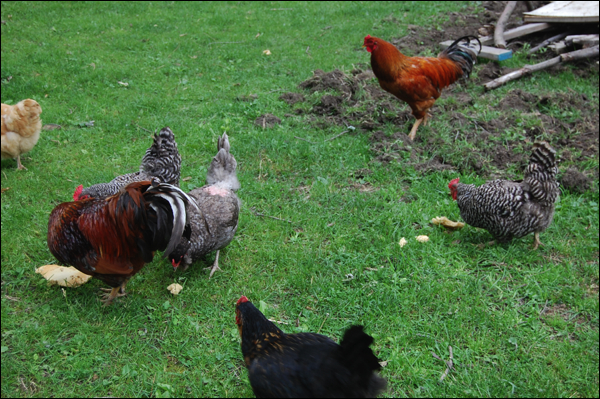 Well, the chickens surely enjoyed them…  but then chickens don’t have taste buds!   Apparently they smelled okay, and to a chicken, that’s a good enough reason for them to dig in! 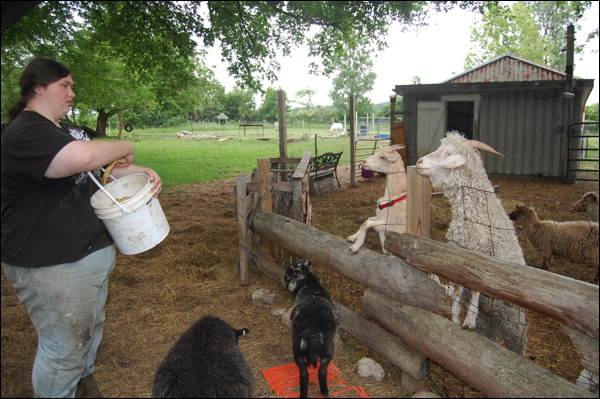 Next stop was the sheep and goat paddock.   They were pretty darn excited at the prospects of breakfast in bed…   and were very ready to take a pancake or three…  but the funny thing is that most of the sheep took a bite and then SPIT THEM OUT!!   I kid you not.   Only the goats ate them, and they were even a bit reluctant…  chewing slowly, looking at us with mistrust.   I believe they thought that it was worming time again and we had slipped the foul ichor into this lovely treat… 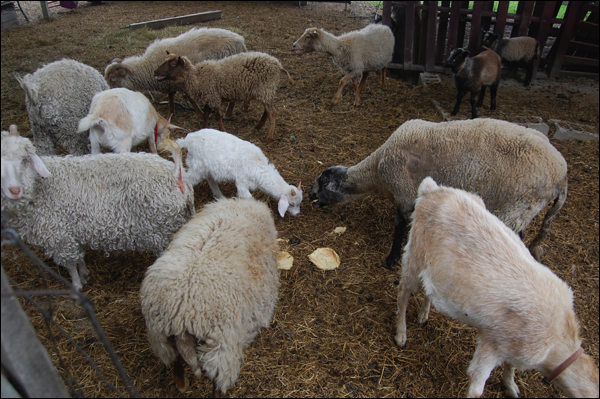 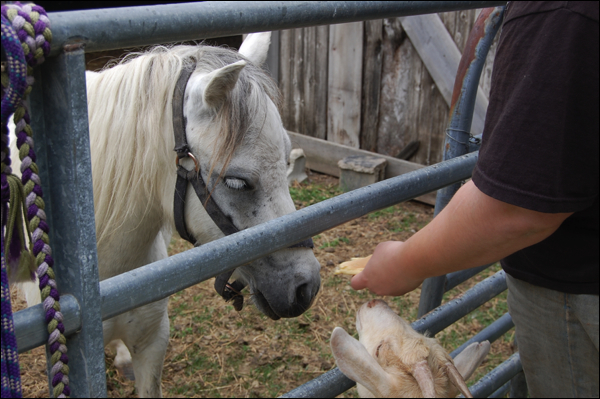 Next up… ponies.   Shadow sniffed and sniffed, but then refused.   No thanks.  I don’t eat cardboard.

Maggie went in and of course, Cody was interested and took one.   He never refuses goodies from the food ladies.   Shadow came over and was very very confused at Cody’s lack of a discerning palate.  Maggie offered him another one and he took it, flipped it to the ground and STOMPED it with his forehoove!!!   Honest to gosh, he did not like the pancakes at all.   Cody only ate one and then was suddenly full and politely passed on the second helping. 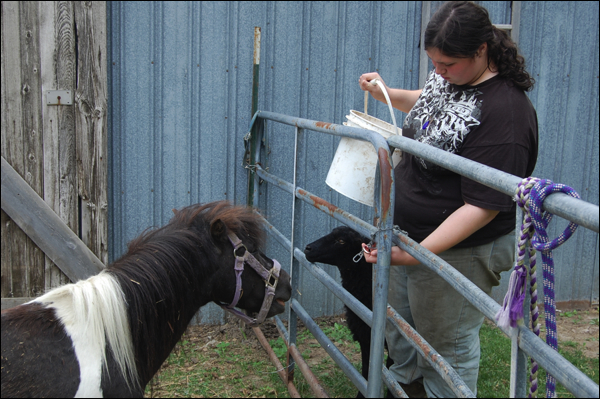 I’m pretty sure that they knew it LOOKED like a pancake, which they all love when I over make pancakes and they get one or two…   but something was very very wrong with them.  It’s like those young men who get a cake baked by their sweetheart and are so excited until they take a bite and realize that she mixed up the salt and the sugar and blech!!!   But they act like they sort of like it as not to hurt her feelings.

Our animals were doing the same thing.   Hahaha….   it was like they were trying to like them, but in reality, they were very confused at the nasty offering.

Shadow usually loves treats!  He was the funnest…  he absolutely hated them! 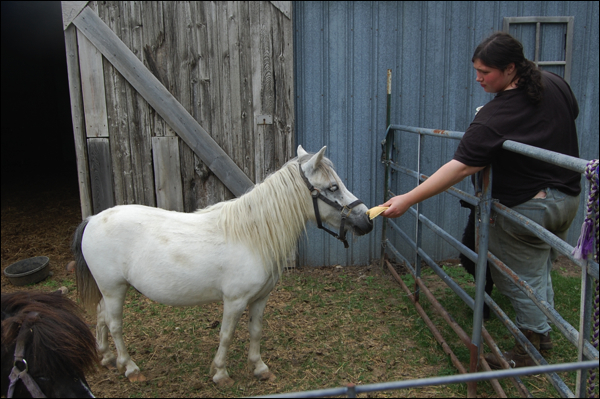 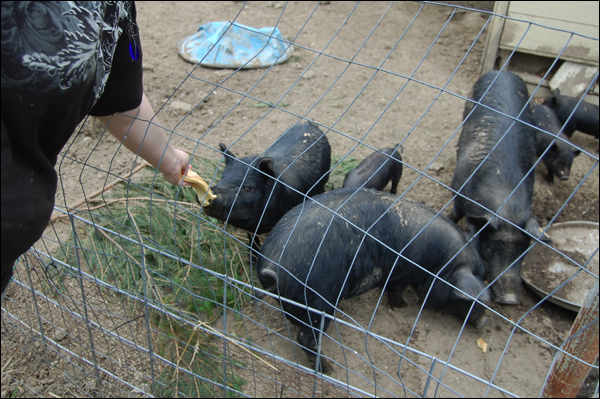 So by the time we got around to the hog pen…  there were a LOT of pancakes left.   And gee…  the hogs thought they were awesome!  I guess there is no accounting for taste in a hog.  They are true opportunivores…  any goodies in the storm you know!   They started to fight over them as well!   Apparently, they like them and they wanted more! 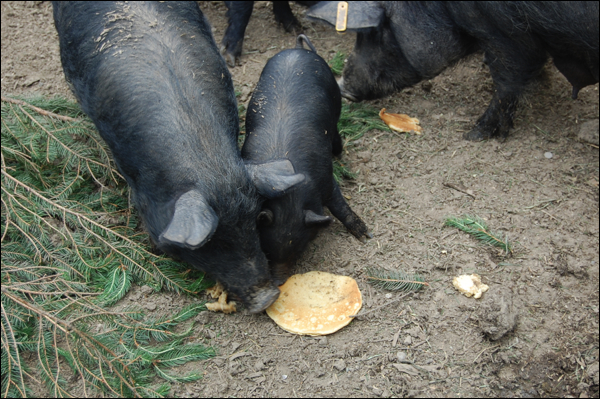 Cheyenne and one of the little boy piggies fighting over a cake or two!   There is no sibling love here… 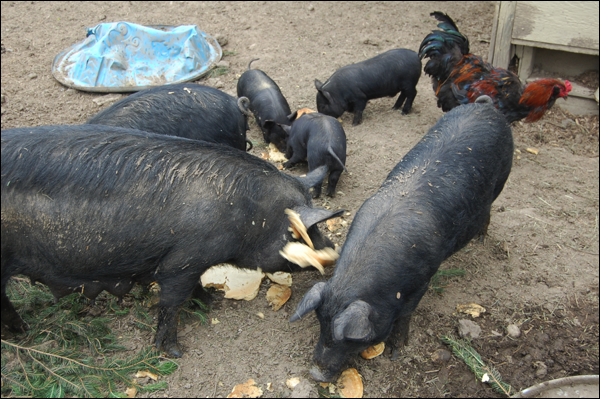 Even Raven, the hog’s pet rooster, got into the fray.   He liked them as well.   So far, hogs and chickens…  YES!   Love them.    Sheep, Goats and Ponies?  Yuck!   Even the dogs were not interested in a second helping after they reluctantly choked down the first offering…

Harley, Dreamy and Radighast were very interested as they love treats…   but of course, they were not too impressed, trying to eat them but silently noting that we had failed in this treat session to produce happy ovines and caprines and showed their dissatisfaction by refusing to wag their tails.  Of course, Daisy was willing to give another one a try…   she’s like that. 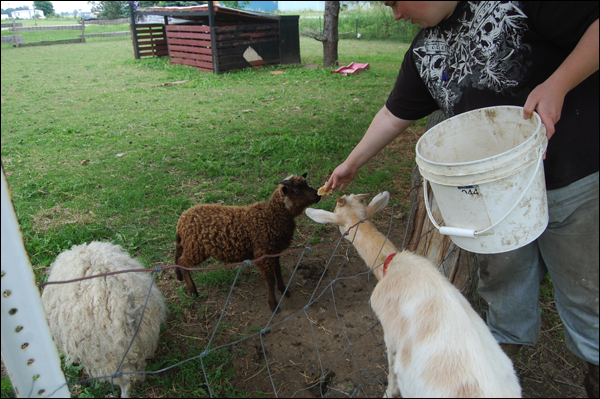 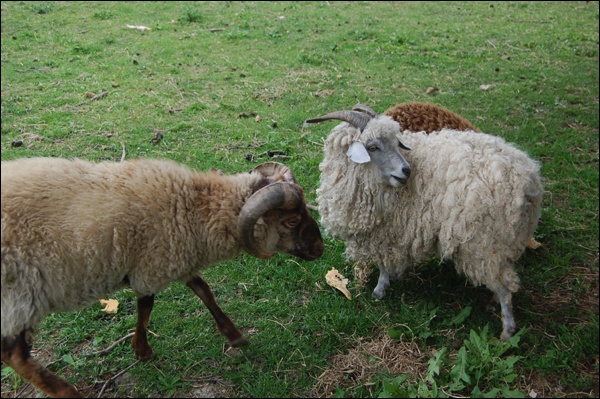 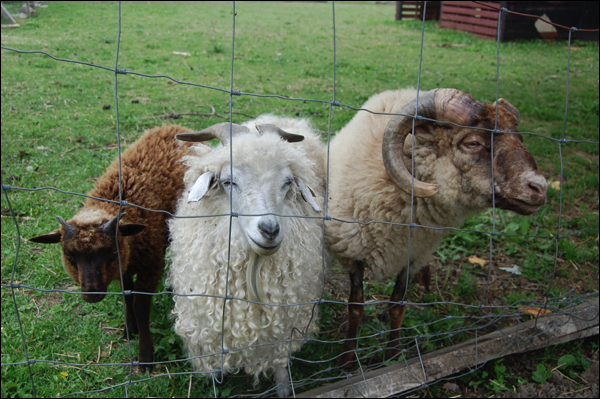 I love this picture of the WIndhaven studs…  haha….  all three looking very happy and contented, even after getting evil nasty pancakes that only hogs and chickens will eat!

Happy Father’s Day from our baby daddies to yours!