↓
Home→Gardening→The Weed Patch is NO MORE! 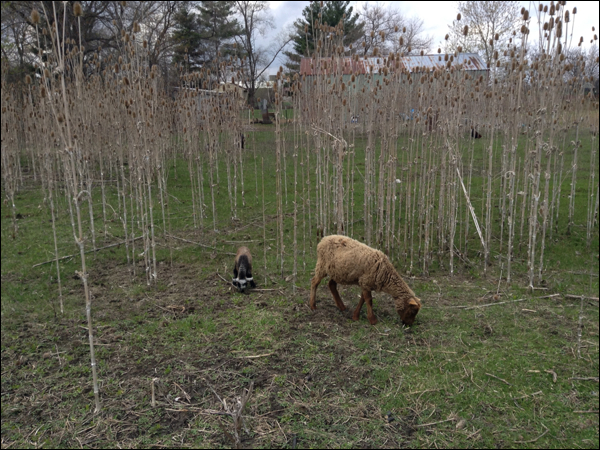 Do you remember our weed patch?   It’s the back eastern pasture of our property that we have been working on to make a pasture for the sheep and goats.

And it was overrun last year by bull thistles.   Oh my gosh….   Maggie had broken her leg first part of June and then Jess and I were just overrun with a lot of things… and next thing you know, there are bull thistles EVERYWHERE and they are too thick for the mower to cut!!!  OH NO!!! 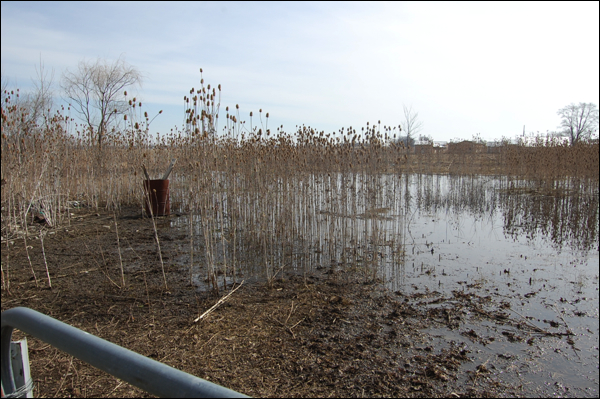 This is what it looked like early in the spring.  It was aweful.  Flooded, muddy and full of hard, thick, nasty bull thistle stalks.   It was so heart breaking.   We would let the sheep out, but they pretty much hated it as well.   I heard mumblings in the dark that the ponies got the next pasture because they were the favorites of the food ladies…   I was worried that the sheep and goats would HATE us… 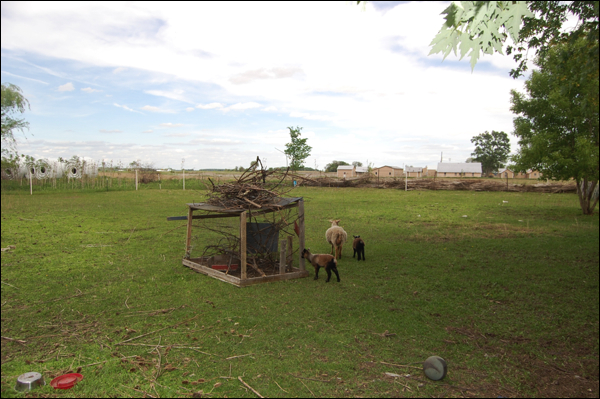 Our wonderful, fabulous, super special, amazing and just wonderfully wonderful friend Justin came over and Maggie and I got started on pulling every single one of those nasty things.

It took six hours, tough gloves and lots of breaks.

It was grueling.  Back breaking.   No fun.

Because we were talking and laughing and comparing who had the longed root or who had the bigger bundle.  Stuff like that.

You know, the stuff that peasants used to laugh about to keep from crying over the hard, unpleasant labor in the fields of the manor lord. 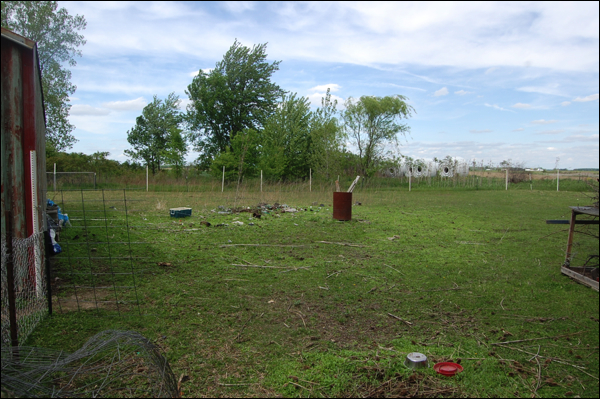 Can you hardly believe it?  I sure can’t!   I just keep walking back there and marveling.  It’s sooo  nice!   It’s like a Martha Stewart pasture!

Okay, maybe not.  Still got the burn barrel trash patch to clean up.   And miscellaneous things here and there.   But I don’t care, it was a wonderful and amazing thing that we did.  And hard work.  And just so rewarding.   The sheepies and goaties were STUNNED.   I kid you not.  They were amazed.   They ran around and nibbled grass and just had a whole day of crazy celebrations and wrote us sonnets of praise and admiration!

Of course, they were hard to decipher, since I’m not very fluent in ovine or caprine sonnets, but I’m pretty sure they were very happy. 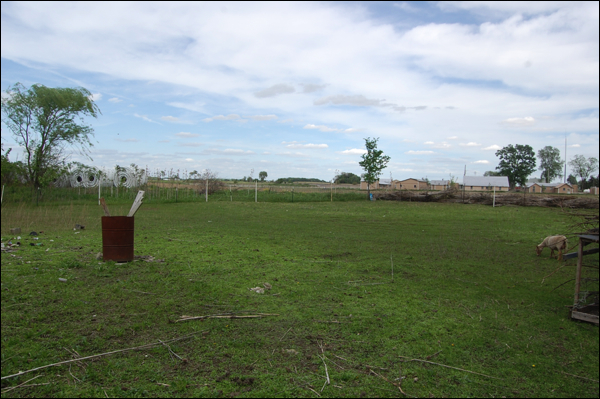 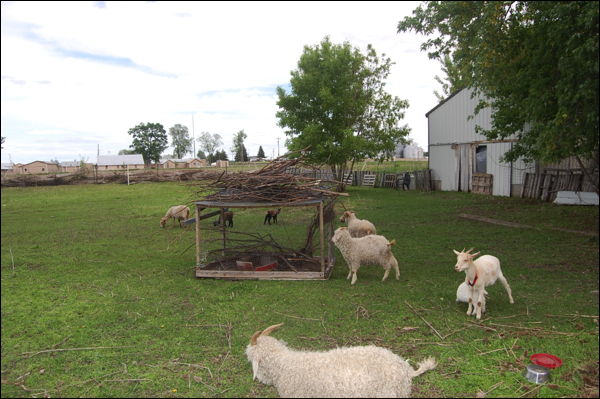 We even took a bit of time to gather up all the fallen sticks and junk that we could get together.   We had this old chicken tractor that is kind of falling apart and will be part of a celebratory bonfire burn later on.  It’s just amazing out there.  All nice and clean and picked up and just wonderful.   I can’t stop smiling.  For all of last summer and then into the fall and winter, I hated that this pasture was so so so overgrown with those dreadful things.  It was awful.

Now, the goats and sheep will eat any of those thistles that think they want to start growing.   They will eat them young, but not once they get much more than a foot high.   If they do start to get a little unwieldy again, we will mow them down.   So far, they haven’t even considered sprouting.  Thank goodness!!!   I was afraid we would be overrun with the nasty things again. 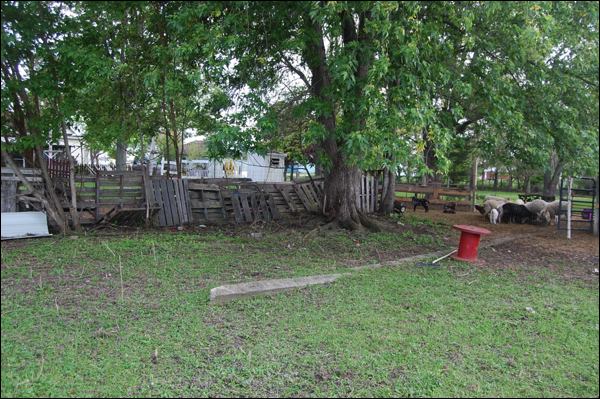 Soon, we are going to remove the old pallet fence (more fuel for the bonfire)  and put up a nice new fence along that cement foundation line.  We hope to get the posts in the ground sooner than later.   Not sure when we will have the cash for the cattle panels that will go there, but hopefully eventually…  all in due time! 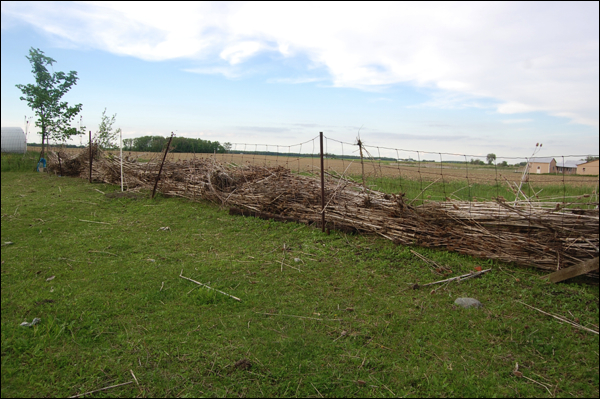 We moved all the bundles of hundreds and hundreds of dead seven foot tall thistle stalks to the far eastern fence.   That fence is old and a bit weak in spots, and we’ve been patching it and wiring it together.  However, laying all the old stalks on the other side, in tight and high bundles, really helps to make a sort of visual and pokey barrier for anyone that might try to get out.   It’s still on our property, and will ultimately break down and compost, but thats fine.  It will help until we might be able to get new fence back there.  Just keep at things…  and you will get it done. 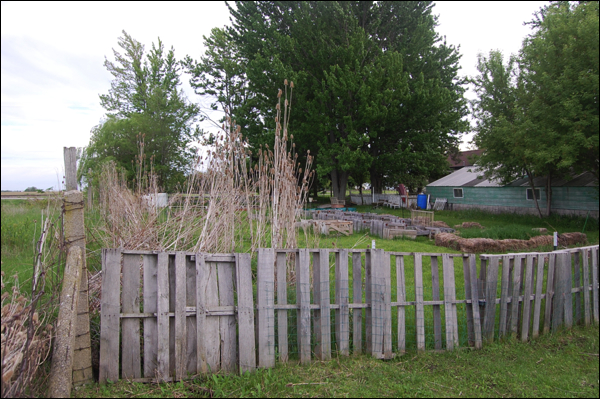 There are a few more thistles here and there.   I need to leave a few growing because I want to win the Fayette Bull Thistle Festival award for the tallest bull thistle.  Last year, the winner was a measly 5 footer.  5 foot?   Are you kidding me?   We have some that are near to eight foot tall!   We are shoe in for winner this year and the years to come.

I wonder if we get a new car or something cool.  For winning.  Hmmm…..