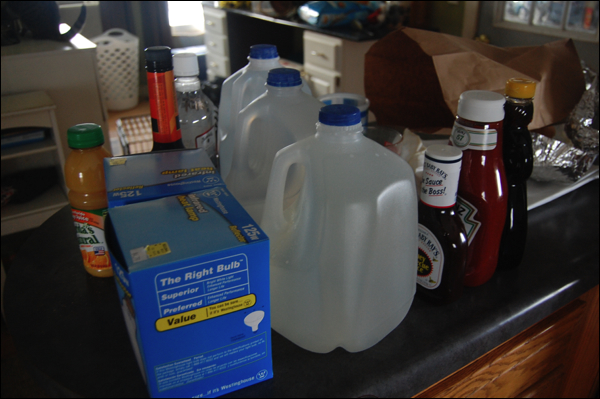 Well, we knew it was coming… first another foot of snow and then the ARCTIC VORTEX!!!  Haha… otherwise known as WINTER…  But that being said, in the last 10 years that we’ve been in this region…  no, wait, more like 18 years!  (time flies)  we haven’t had this bad of a winter or this much snow and cold then I remember…

So we did what every other self respecting bunch of farm chicks do when they got a little warning and know they have to get ready….  they go shopping! 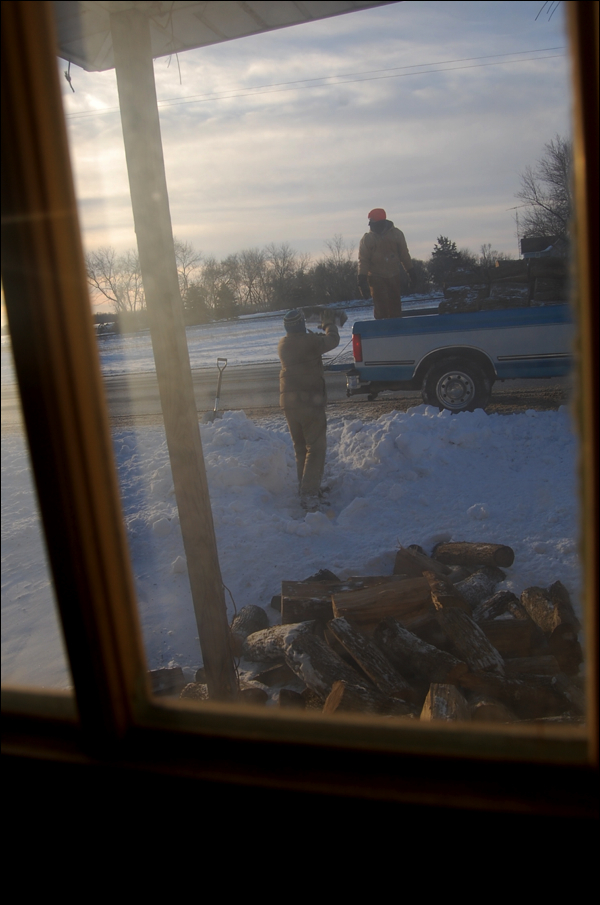 We got a load of firewood delivered…   Just in time!

And we went and got the last of the heat lamp bulbs in two close towns…  and of course, some condiments and a bottle of peach schnapps that was 50% off because it was Christmas themed.   Hey, adult beverages do help to pass the time when you’re weather bound.

Well, we also stop and got feed, mostly 4 bales of hay and 4 bales of straw to make for deep bedding and help give the animals something to lay on rather than the cold hard ground.  Of course, that meant two trips because we can only fit 4 bales in old Blue at a time.  I guess it’s one of those rare occasions that I think it would be fun to have a spare truck, but I just can’t seem to justify the cost and gas and insurance and all that, just for those rare times when a truck would be nice.

This is Dammartin, one of Bucka Roo’s sons.  He is a French Copper Marans Wheaten rooster.  And apparently made of some pretty tough stuff, because he and Dad were out walking around in the snow!  It wasn’t too cold actually, not yet anyway, about 30 degrees or so.   Still, it was very tough getting around because of the foot or so of snow on the ground already!  And it was very drifting and just made everything take twice the time! 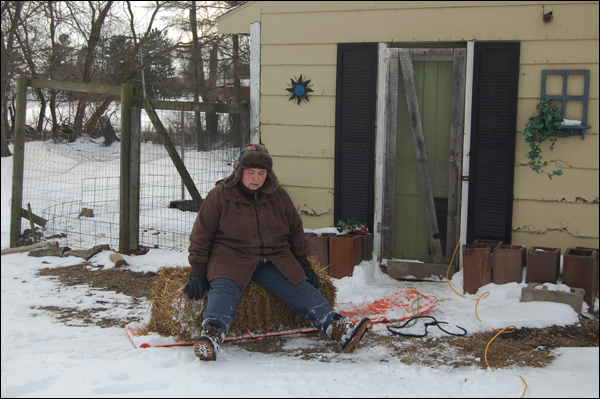 Jessy is tuckered out!  I am so proud of my girls, they were outside working for over 5 hours!  I spent some of that time on errands and getting hay and straw but then did my share as well, but I think this picture of Jessy taking a little break from hauling straw out to the pig family sort of tells ya, this is hard work! 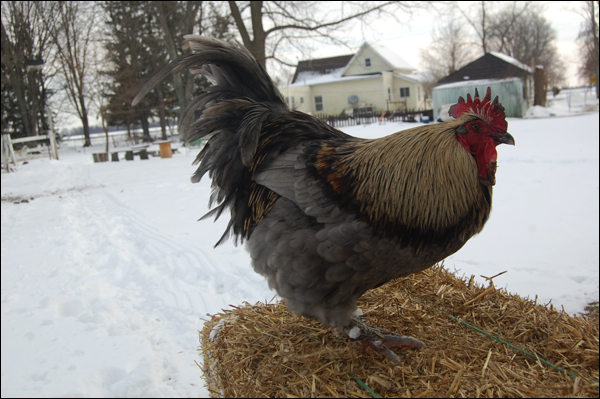 SIlly rooster…  we always have someone keeping an eye on us…

There’s a smile…  she is very very happy with her fancy ear flap hat.  I will admit, it’s wonderfully toasty warm!  I think everyone needs ear flap hats!!!  They work very well. 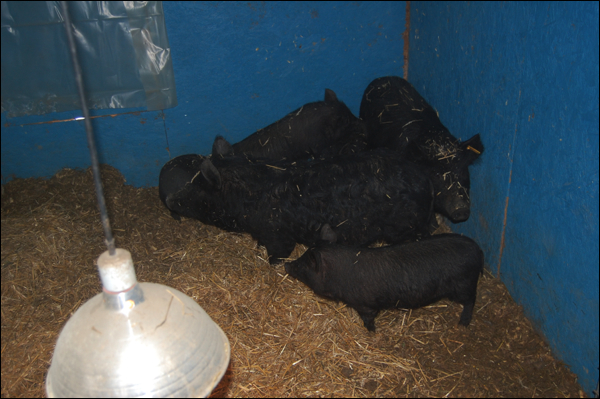 Onyx is really getting in thick with his new wife and step children.  In fact, they treat him just like one of the family!  Awww…  And as we tossed the bale of straw into their pen, they all acted like weenies and squeeled and ran to the back corner, with all but one piglet hiding behind their big boar daddy.  Of course, they are just being silly, because they came right over to investigate and start playing in the lovely straw.  They love to root around and enjoy nice new bedding. 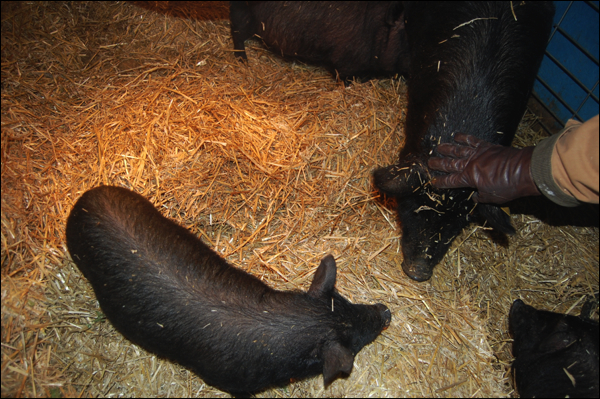 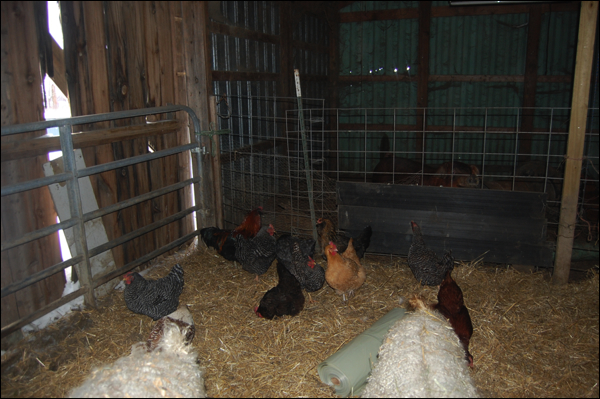 After we got them some new straw, it was off to the big barn where we have moved Oscar, the hog to the back pen of the barn and then went and rescued the goats from the sheep barn.  We had everyone all together, but the goats are a little more fragile and basically are big divas.  They hate it when it’s raining, or wet, or damp or cold or snowy…  basically all weather.  And the angora goats are a bit more fragile than say, hardy Shetland sheep.  So about this time of the year, it’s best to just gather them all up and pop them in the big barn until spring.  They really don’t mind.   Not at all.  Especially with a heat lamp, some chickens and hay and nice new straw…  They are nice and content in there… 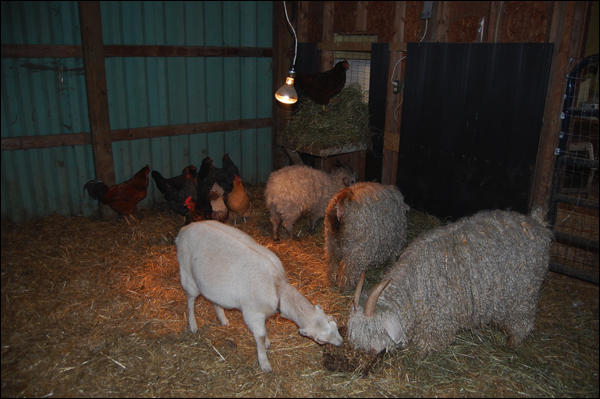 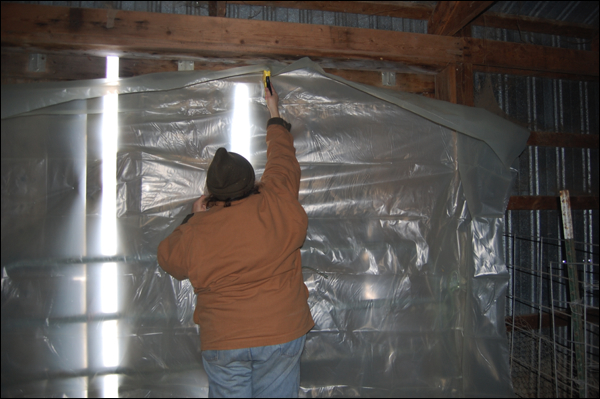 We stapled up some heavy plastic over the big doors because they are really in rough shape.  We need to replace at least one of them, sooner than later.  But the heavy plastic really makes it toasty warm in there! 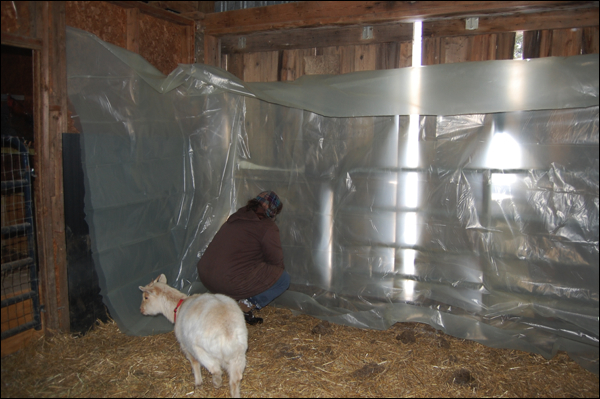 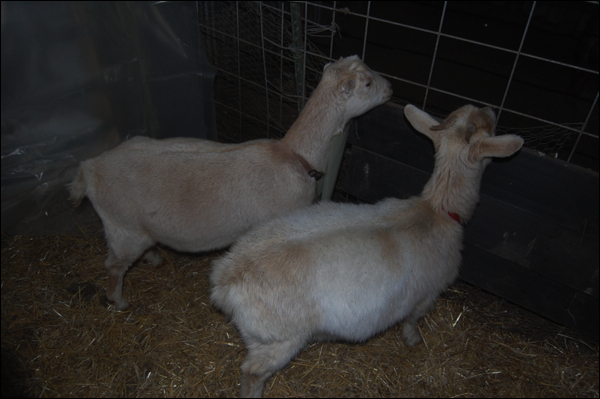 I’m fairly certain that both our milk does are expecting.   They are starting to have some nice little baby bellies going on.  Mr. Dreamy is the dad and Buttercup and Daisy are his little sister-wives!  Not sure if he was able to connect with Rana… she’s a bit more of a challenge…  as she is a good deal ah, taller than he is.   But you know, where there is a will, there is a way!  I guess we’ll know in the spring!!! 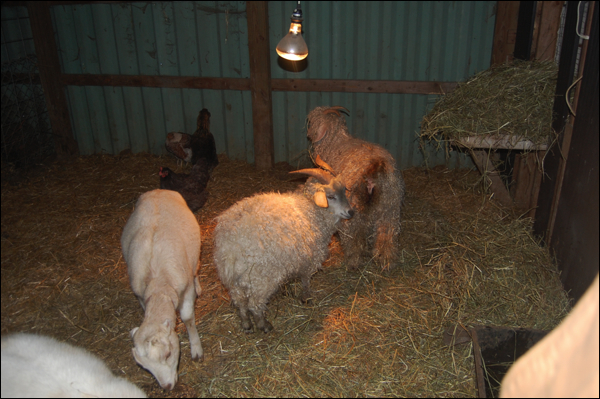 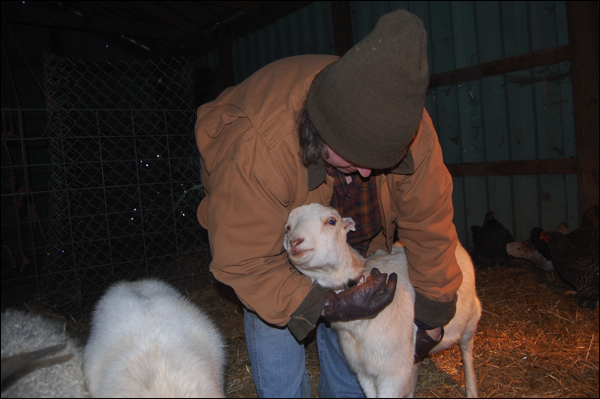 I miss Buttercup a lot!  I don’t see her as much and as long, but she still is my sweetheart…  Can’t wait till we get closer to baby kid time!  I think she will be the sweetest little momma… 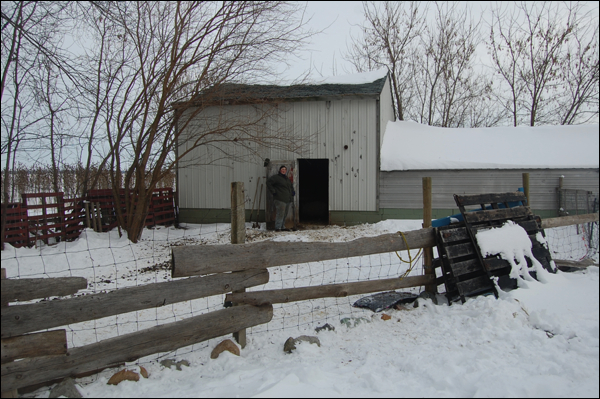 Maggie hard at work, chipping away at ice and snow and muck that accumulates on the stoop of the sheep barn doorway.   We REALLY need to trim off about 3 inches of that door….  every winter we seem to have trouble with this dumb thing and usually when the worse weather is heading our way!!! 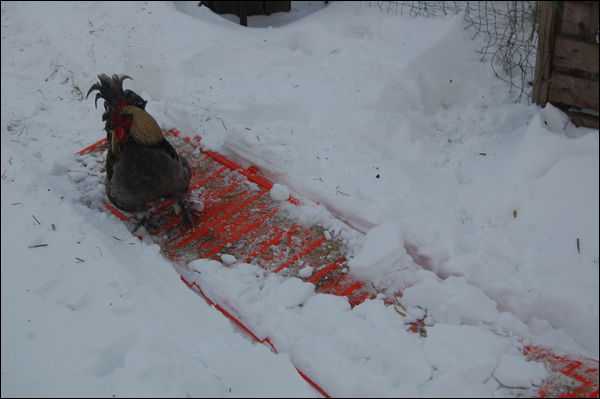 Dammartin likes to ride on the bale sled…   what a goofy bird.  He actually weaves and bobs like he’s surfing…  Silly roosters!  We love them… 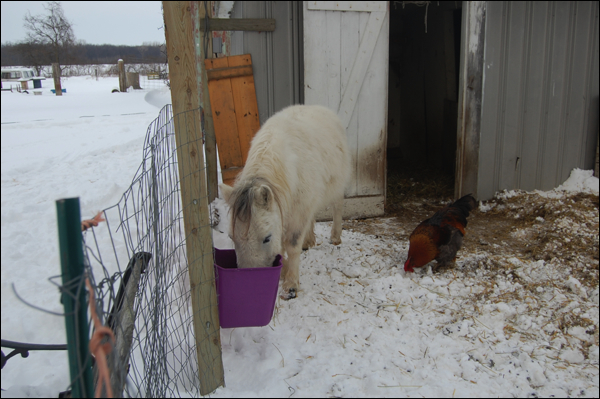 Bucka Roo is hanging out with Shadow for a little male bonding there…  I was really surprised to see Bucka and Dammartin outside so much.   All the other chickens are spending pretty much all their time INSIDE…  where it’s much warmer!   But not this father and son.  They are winter troopers!!! 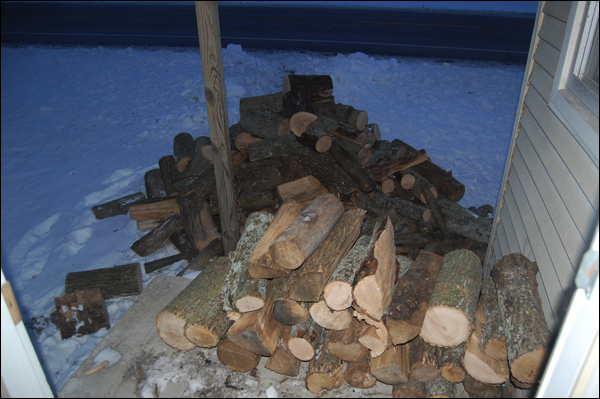 There’s nothing so wonderful than a big stack of wonderful firewood!!!  Yum!!!!   Nice and warm.

We are ready to take on this winter storm….  More news is on our Facebook page…  if you want up to the minute information.  If not, I’ll be sure to try and get this all updated within a day or two!!!  So glad we still have internet and electricity!!!!

Hope you are all faring well!!!!