Hang in there gentle readers…  we’re just super busy like all years at this time… it’s nutso time for us.  Holiday orders overwhelm us, in a good way, yet a slightly stressful way, especially since we managed to all get nasty colds right now.  So we’re all sniffling and coughing and working late hours.  It should slow down for us in a few days and then we’ll be able to enjoy our holidays!

Everyone on the farm is doing well.  I don’t know if we have lambs on the way for sure, but I have to say, there’s a weird vibe out in the yard with all the ewes.  They seem to be a growing force of attitude!!!   I’ve noticed that they have been hanging out with each other, and head butting others that get in their pathway and just have a sort of “I’m the Mom” thing going on.   Maybe I’m just hoping so, but they do seem a little different. 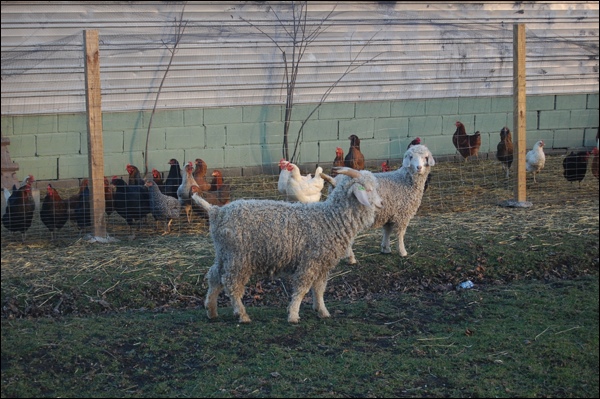 The goaties are getting along just fine.   I’m glad the weather has been mild, since they are still sleeping outside.  I’ve tried everything I can think of, but the sheep won’t let the two newcomers into the barn at night!  So they huddle together in the hay feeder.  During the day, they mingle with everyone, so it’s not a real aggression thing, I just think they feel a little more comfy outside, still. If it gets really cold we’ll probably put them in the big barn with the chickens.  That will be a trick because they still won’t let us touch them, but they are getting a little closer and curious about Maggie and I.  It takes time, they have to really learn that we’re okay.  They’ve only really been here about 3 weeks.  By spring, they’ll be our best friends!

Cody Pony is SO shaggy!  He looks like a fuzzy catepillar!  It’s fun to see how big and round he looks when he grows his wild Shetland coat.  It’s hard to show in pictures, but in person, his fuzz stands on end, so he’s super soft to touch, but like his hair is 3 inches long!  Shetland ponies and sheep are super hardy beasts that can live off the littlest bit of fodder and love the cold weather.  It can be raining sleet and the goofs are out in it, grazing like it’s a spring shower.  Cody’s coat especially, it gets this weird light coating of like a grease, or a wax, that sheds water marvelously!  I was reading about Shetland ponies and it’s that coat that give them really good protection up in the highlands of the Shetland Islands.  Of course, Cody’s never been there, but it’s cool to see that he retains a lot of that primitive breeding still.  The book said to avoid grooming them during the winter if they are out to pasture…  shesh….  well, I hate to see him all muddy and weird looking, so I decided that a little light brushing shouldn’t hurt him too much.  Besides, he HAS a barn, if he’s cold, he can go and hang out there.  Which he does, occasionally, for naps. 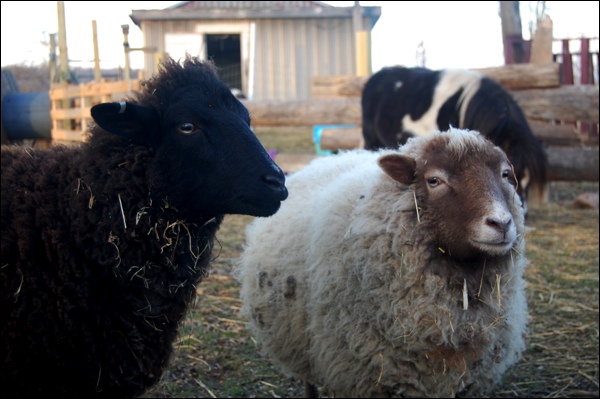 Ivy is wondering….  what the heck is up with Holly’s Don King hairdo?  It’s been really weird lately, usually standing straight up or all fuzzy weird.  All the other ladies have nice controlled hairdos.  But then, Holly, is my black sheep of the herd.  She truly is.  She’s the most vocal, if you call, she will answer.  And answer, and well, answer.  haha….

Well, just checking in and saying hello.  We’ll be back in a few days with lots of good stuff, been saving up some photos and all, stories of what is going on here.  We’ve got another couple days of sales I imagine and then it will drop off because folks just know that you can’t get mail order stuff if you order too late near the holidays.  Everyone is swamped and the post office is just working like nuts to get stuff done and out the door.  We must have 40 boxes to take to the post office in a little bit!!!  Crazy!