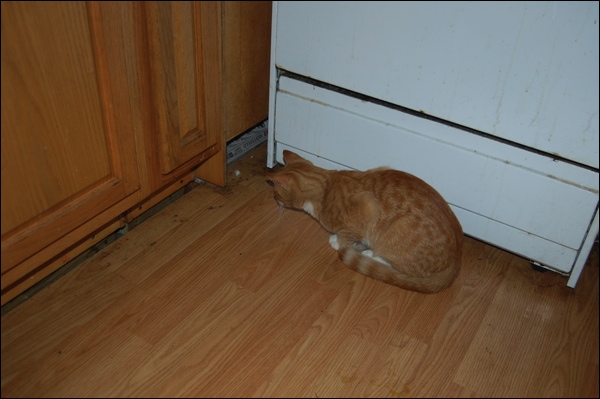 Baron caught his first mousie in the house a few days ago.  He was just hanging out in the kitchen and all the sudden he saw a little whisker flash and POUNCE!  He had a little mouse in his mouth!

He was sent outside with his prize and returned about an hour later, only to sit in front of the little hole and wait.

He never caught another there, but now he checks the spot every time he comes into the kitchen!  haha… it’s kinda funny.  He is going to be ready no matter what.

We have had now 3 mice in the house, that the cats have caught!  We didn’t have this last year.  Our neighbors have had a mouse or two in their kitchen too!  I wonder if they know something about the impending cold weather!!!  Well, at least the kitties are making it a little tough on them.  Feline Feed & Pantry Guardians…   Haha…  I’ve heard them described.

We made little kitty snuggles out in the mudroom for the barn cats.  As much as I would like everyone in the house, they are not very good with the litter box and also like to pick fights with each other and knock stuff off shelves and pretty much cause chaos in the house.  So they are demoted to outside living.  However, with the new kitty door that lets them into the warmer mud room and their snuggle boxes, they are pretty happy.  The boys have each claimed their own box and it’s cute to see them all snugged in their spaces, purring and happy.  They learned how to use the kitty door in about two days flat.  I would say one, but the first day they were not so sure and had to be shoved through a time or two.  But now they are using it like they have been for a hundred years.  Even Luna is using it.

Of course, Evee has tried, but only managed to get her big head stuck.  Just for one awkward moment.  Now she just ignores the little door.

Silly dog…  Ratchet knows better.  He just looked it for a moment, gave it a sniff and walked off.  He had better things to do.