It was Sunday afternoon… and the skies finally got dark and rumbly and the sound of thunder got closer and closer.  Miss Julia and I were texting back and forth silly things, like how they were sitting in their driveway just tempting the rain to drench them.  I considered a naked run out to the pig barn just to get some rain.  We were being silly…  but then it started to look less like a good rain storm and more like a serious blow…   the winds started to kick up and the lightening was striking…  I heard Cody scream and I knew we had to get the animals in from the storm.  All it takes is a frightened pony to wreck a fence in panic.

So I called to the girls and Maggie was already on her way out the door.  Jessy was getting her shoes and I went out in my slippers, not even thinking, just worrying as the storm approached.  Slippers can be replaced, a flock of sheep, much harder!

Maggie had disappeared in the dark, and I thought she might be way in the back, trying to get the herd back into the middle yard, and ultimately into their barn, but she was no where to be seen.  So I rush out there just as the first drops were hitting.  Everyone was waiting at the gate and I didn’t even need any grain to convince them to follow me to the barn, they were leading the way.   Cody was particularly frightened, dancing about, his eyes big and wild.  Then a saw lightening hit a tree way in the back pasture and I knew why he was nervous.  We hurried on our way.

Just as I got everyone into the sheep barn, the heavens opened up and it started to pour.  I don’t think I’ve ever seen so much rain in such a short amount of time!  It was deafening, even in the two story building.  Just pouring down.  The sheep huddled around me, milling and just touching my hands and legs with their muzzles.  They were scared.  I totally understand the whole shepherd thing, the connections with Jesus as a shepherd to us all since I have gotten my own flock.  Normally, they do as they please and are skittish and funny, sometimes wanting attention, sometimes not.  But once things get a little hairy, they want me.  They want me to lead them to safety, they want me calm and collective and they draw from that energy.  The boys, Fergus and Angus, especially get very affectionate when they are scared.  The want chin rubs and head pats and they wag their little tails non-stop.  Even Molly was bumping my leg, huddled up close as the thunder cracked overhead and the winds blew the rain sideways into the open barn door in the back.

I managed to get the side door closed, with a piece of twine and a little luck.  It was blowing so hard, it was hard to hold onto the door.  I made a mental note that we should put a handle on the inside of the door!! It was hard to get closed without something to hold on to.  Once in, I went to the little nailed in gate that seperates the sheep barn from the poultry barn in front and was happy to see Maggie just getting in the doorway.  She had gone back to the house to get her birthday poncho… haha….  and now she was drenching wet and probably weighed 30 pounds more!  That Mexican wool poncho she adored was streaming water off the bottom!

We could hardly hear each other speak from the pouring rain on the metal roof of the poultry barn.  She came down towards me, since I was locked in with the hoofstock and we chatted a minute or so.  She was worried about the turkeys in the big barn since the rain was coming from the west and the big side door was open.  So she was going to go and check on them.  I told her to stay away from the open and from under the big trees, and wished her luck.  She’s a stubborn thing and she was going to do it anyway.  Might as well give her my blessing.

Just as she left, I realize that Jessy is out in the yard, rescuing the meat chickens with a dog crate and a stick!

It never ceases to amaze me just now much my girls have matured and blossomed out here.  This past year has been amazing.  They are such wonderful kids.  Jessy…. afraid of chickens…  was out in the nastiest storm I’ve seen in years, first trying to get them under a laundry basket and inch them across the yard to safety and then gave up on that plan and got the dog crate from the screen porch and was herding the frighten, drenched nuggets into the crate, one at a time and then trundling a bunch at a time off to the poultry barn to let them loose and go after more!

Well, I braved a run from the sheep barn as the rain was letting up a bit.  Said farewell to my little sheep and pony friends and dashed off.  My slippers were soaking wet, and mostly just protection from the little rocks and twigs that were strew about.  A heard a crack and a big branch from the maple tree in the middle yard broke free and came tumbling down!    I got to Jessy as she was lugging back the last crate load to safety.  She was laughing and just totally soaked!  We got into the poultry barn and watched the poor little nuggets as they shuffled and shook their drenched feathers…  oh they were so pathetic looking!  Jessy had come out into the screen porch to check on her bunnies and saw the ten birds huddled in a corner, with rain from a missing piece of gutter, just pouring down on them.  They seemed paralyzed with fear and just couldn’t figure out what to do, so they stayed there, as the waters were rising.  She couldn’t reach us, so she knew she had to save them…  I’m so proud of her, even with her fear of the large birds, she couldn’t let them drown.

As the rain finally began to lighten a bit, Maggie came from the back and announced that the turkeys were fine.  She had gotten the doors shut and most of the free range flock was in their roost room as well, so she closed them up, too.  Everyone was battened down and hatches were all covered!  We sat in the poultry barn, on the big cement table for awhile and just watched in silence.  Thank goodness we got this rain, we SO needed it!  You could almost hear the grass singing in happiness as it soaked up all that was offered.  All around the yard were huge puddles, the rain had come down so hard and fast, even the parched earth couldn’t soak it all in!  I hear we got almost 3 inches of rain in that hour.  I can imagine it!

Well, once it let up enough, we ambled back to the house, stripping off soaking clothes and getting into clean, dry new stuff and then we realized, the power was off.  Oh no….   and then we realized that our hatching eggs where getting colder and colder!  We had one chick already hatched and another trying to hatch.  I knew my neighbors had no power after a call, and then called my friend Bill, who lives about 10 miles away.  He had power and said bring it over.

By the time we got there, the temp in the incubator had dropped so far.  We got them warmed and going again, but I wasn’t sure it would be okay.  But there wasn’t much else we could do, it was a casualty of the storm.  He watched them all night and in the morning, another had hatched and we had to help the last one out of his shell, he had been trying for over 12 hours and still had not gotten free.  We thought he was dead, but he wasn’t and I’m glad to report, the little fellow is still alive, though his one leg is very weak.  Two of them hatched and they are a fiesty little pair… 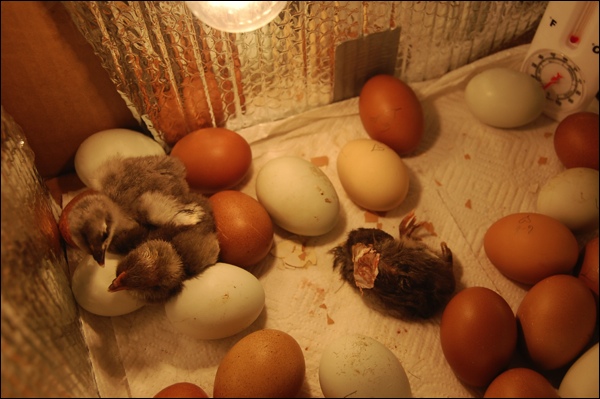 Stormy and Thunder are the active crazy chicks and little Lightening is the weak legged one.  He’s all dark.  I think he might get better, every day he seems a lot stronger.  He’s determined to live, so we’ll give him the chance.  I might use a little bandage and try and straighten and strengthen his little leg for him.  He’s eating and drinking, so I think that’s a good sign. 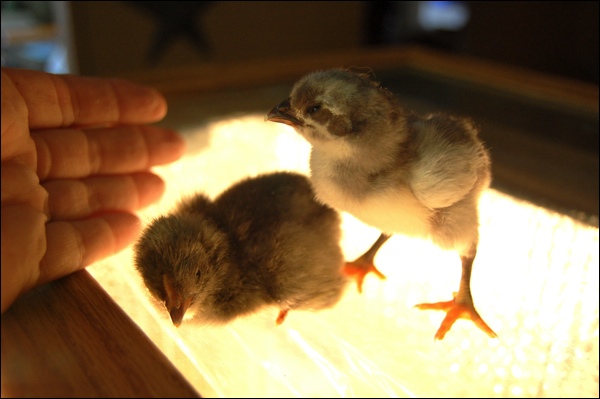 But, unfortunately, I think we lost over 38 eggs because so far, no more have hatched.  And it’s been three days.  I am going to give them another day or two but I really think we’ve lost them.  So disappointing!  I think we are done incubatoring for awhile, until we can afford a good Brinsea incubator.  It’s just too hard to loose them for various reasons!  And I think we are just going to order a bunch of female chicks from our favorite hatchery…. Meyer…. they are having some specials on mixed assortments of heritage chicks, all females, and free shipping.  Can’t go wrong with that.

But I do love to watch the little guys hatch!

Well, aside from the eggs, and a few downed branches, everyone fared well and we can see the grass just starting to green a teeny bit!   We have made sure the hoof stock is staying in the barnyard pasture and not in the middle to give the middle yard a good week or so to grow back!  I so love to see the beautiful green grass instead of dead brown parched earth.   We are slated for a few more days here and there of late afternoon thunderstorms with this heat and we will welcome them all!  This storm saved the farm for sure, but we’re not out of the woods yet.  We will need a little more in the coming week or it will just get burned out again!  Here’s hoping!!!