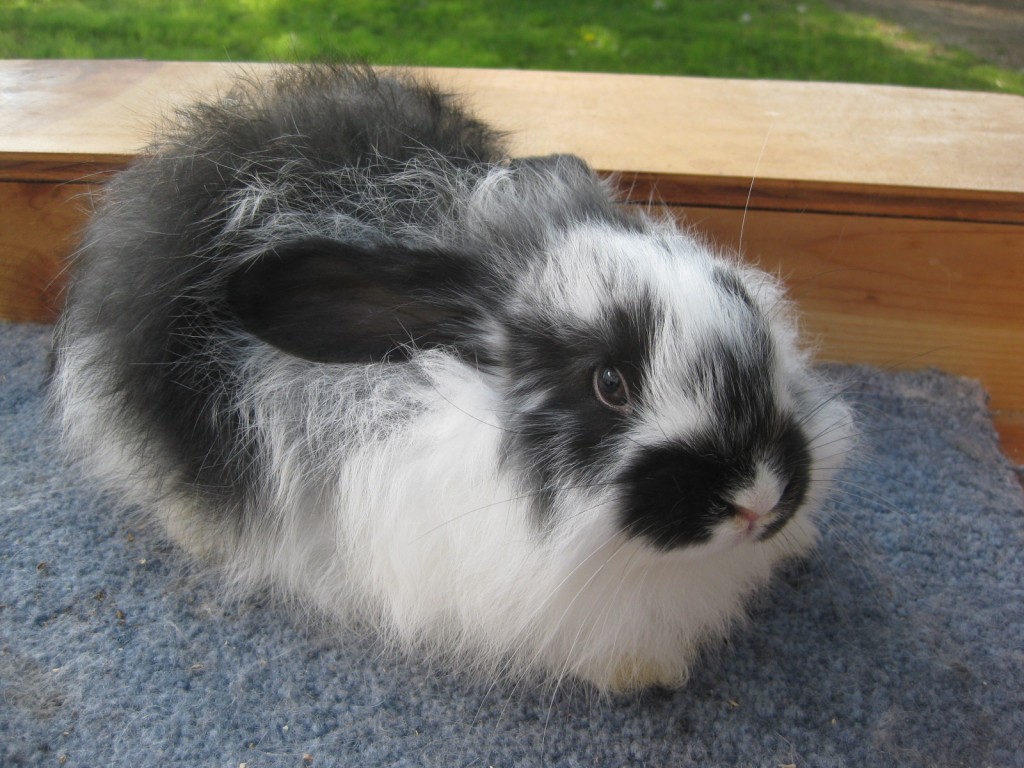 We’re all excited about welcoming our new bunny boy to the fold, and got to thinking, I’m not sure if I ever talked much about our bunny plans… As you know, we have four Angora bunnies at the moment and this new fellow will make it five.

There are basically several types of Angora rabbits. English, French, German and Giant. Now there are a variation on the theme, called Woolies, or Jersey Woolies, but we’re going to stay with the 4 Angoras for the moment.

The English, which our two rescues are… are the smallest of the breed, and have long wool hair all over them. Heads, behinds, feet, body, the whole 9 yards. They seem to have the nicest temperament, and really do well as inside pets as well as “livestock”. Our buck, Odin, and his daughter Grizelda are very sweet buns, but they are still recuperating from some lackluster care from previous owners. Odin is FINALLY starting to fill out nicely, but he’s still underweight, if you ask me. His hair is finally starting to look a little more well, nicer and fuller. His daughter, Grizzy, is fairing better, faster, but it could be her youth that is aiding her. We might consider breeding her in the spring, but only if she continues to improve over all.

The French, which are larger than the English, and do not have long wool on their heads and feet and bottoms as much. They are the best Angora, in my humble opinion, for the fiber bunny owner. They are much easier to harvest wool from, since just brushing or “plucking” will give you all the hair you need. “Plucking” is to pet and easily pull out hair as it releases from the bunny. They shed every so often and you will know when it’s prime plucking time because it will be all over your clothes and their hutch and such! And it brushes out very easily! Our girl Gwendolyn is a lovely grey French and in wonderful form and all. She has a bit of attitude for a bunny, but she loves to be brushed and I believe she will be a good mother. However, it’s fairly frowned upon to mix the types within the breed. Most people want one or the other, but not a cross. So, that is why we are looking for a boyfriend for her. Someone with excellent lines, pedigree and all, so that we are attempting to keep the breed solid and stable.

The German… our altered male Ozzy is a German angora. He is the largest of our bunnies and a real doll. He lives with the girls and they adore him, cuddling up with him, grooming him and generally just keeping him around as their little cuddle bunny. I think he approves. Germans do not shed out, nor can you really pluck them. The Germans must be sheared, like sheep for their lovely wool. For that reason, we love Ozzy, but I do not see us wanting to venture into that line of bunnies. They are harder to sell to the public as fiber pets because shearing is just a little more difficult than just brushing for your fiber. And they are a big bunny. Ozzy is like way bigger than most house cats! And rabbits are good at making lots of manure for your garden! Lots!!!

We don’t know a whole lot about the Giants… since Ozzy is really huge to us, I just can’t imagine the Giants! And we’re not interested in raising the woolies, either. Nice rabbits, but we love the Angoras.

So… our plan has been to seek out a nice French buck, good lines, pedigreed and registered. And that has been hard! We’re really excited about this little boy, because he’s within our price range… (some bunny bucks are easily $200 PLUS!) and he’s a cutie and close enough that we can make the drive fairly easily. He’s still young, which is fine, actually something we wanted because he can handle and bond with him much better than an larger, adult animal. He will be spoiled… Jessy is already getting her noodle around his special care and boarding! She doesn’t want him out in the porch quite yet, because she’s afraid he will be cold… can you see that this little boy will be SUPER spoiled???

Perhaps in the spring, he will be filled out and mature enough to handle fatherhood… who knows? But he will be a good pal for Odin, although, of course, in separate apartments in the big hutch! But since they will be side by side, it’s still better than having no bunny friends. Odin is a sweety, so I think he’s more likely to enjoy the company of the new boy, rather than fight through the cages. I guess we’ll see. If they don’t get along as cage mates, then we’ll just have to put a more solid barrier in place. Just a wait and see thing, I suppose.

We’ll be finishing the bottom of the hutch in the next couple days, and then making some shelter boxes for them all from the cold. And we’re going to be plasticing in our screen porch to help with the cold and wind and rain. All in the plans for the next week or so. Can’t wait for the little roadtrip on Sunday! Should be fun! The breeder’s farm sounds delightful… mostly into fiber animals such as alpacas and such. And who knows? Perhaps the spring will herald a first litter of little sweet French Angora bunnies! That would be awesome!