• Load up Blue with extra kitchen stuff
• Load up Curtis’ truck with cold frames, potted trees, yard stuff
• Out to the farm by 10:30 or so…
• Fiddle around with well and furnace… HOPEFULLY getting her going!  (Almost… needed a part!)
• Unload truck and car
• If nice… pull down hanging big branches
• Gather side yard branches
• Hang Kitchen door
• Hang house numbers
• Install new crystal light sheet in dining room  (It cracked in the cold!  Waaaa!)

Well I am happy to report that we have WATER!  Yeah!!!!  My buddy Curtis got the well running!  That was huge…  now we have cleaning water, and a inside potty!  Yeah!

The bad part?  The water heater is shot.  Which we were aware of, but hoped that MAYBE it would hang in there a bit longer.   But it’s full of rust and the pilot assembly is all burnt and won’t light and it’s not piped correctly and just is plain worn out.  It’s okay though, we were aware of it from the inspection and I’ve done my research and I believe a medium sized tankless on-demand water heater will do us just fine.  We don’t have a heavy hot water load, and they are safer and cheaper and make a lot more sense than an old huge 40 gallon gas thing.  I’d be happy if we just used gas for the furnace, to be honest.

But water!  YAH!!   That is a huge thing.  SO happy about that.  And we have water out at the barn and coop too!  Another big plus towards the livestock acquisition phase!  haha… 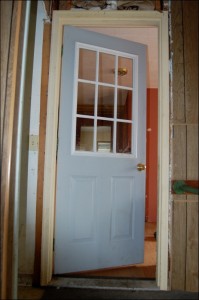 While Curtis worked on the fire and water of the beast, Maggie and I managed to get the kitchen door hung.  It was a little touch and go…  cranky teen and innept mom.. haha…  always a recipe for disaster, but we managed to slog through and get her hung and working!  Yeah!!!  That will help a good deal in the staying warmer in the house!  And it just looks nicer than having a big old door laying against the wall.  It’s little accomplishments that really seem to help move the day along for certain!

Maggie was anxious to get her cart out in the yard and working.  And she sure did.   Several cartloads of sticks made it out to the edge of our property, to help make up our permaculture fence!  She had a pretty nice technique… pile high and strap it down with a bungie cord or two.  It really is going to be a super good helper on the farm for sure.  She used it as well to trot in boxes from the car and it was helpful.  It can hold up to 500 pounds, that is one tough little cart for sure. 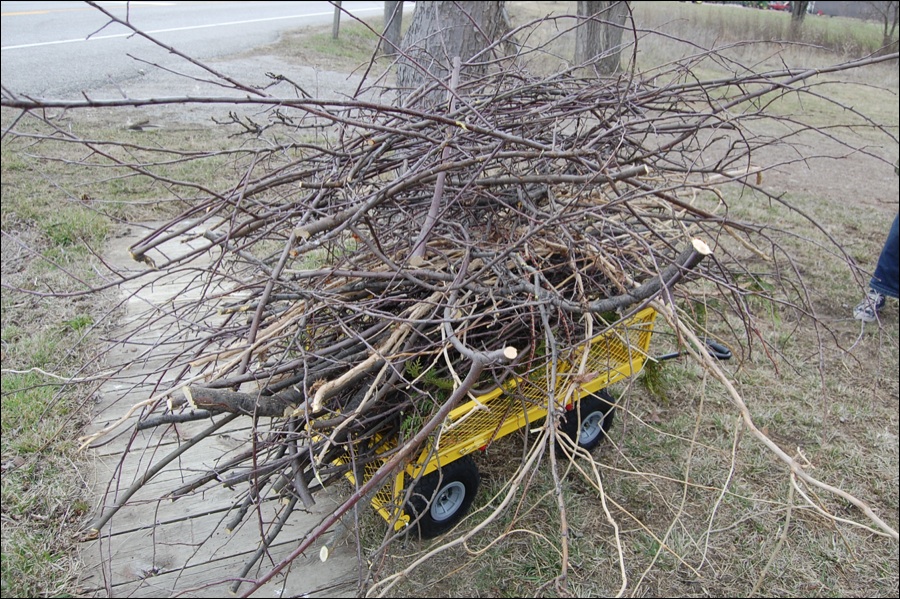 I worked in the house a bit, and unloaded 4 boxes of kitchen stuff… mostly small appliances, and our seasonal things like the apple peeler and canning supplies.  Put them all away and brought the boxes back for refilling.  I rather like this one car load at a time moving…  it’s nice to bring it in, put it away and trot back the box to reuse.  I don’t have to go scrounging for a zillion boxes and it’s really manageable and fun.   The moby is starting to look a little empty…  We are finally making a little headway and a good dent!

After the water was turned on, we realized that the kitchen was set up for a dishwater and no one bothered to cap off the drain or water lines!  Ugh!  So we can’t use the kitchen water until we either cap it all off, or get a dishwasher!  Now, we were thinking of getting a used one, and it seems silly to buy the stuff to cap it off, and then have to uncap it for a dishwasher.  So for now, there’s no water in the kitchen.  And we’re hunting down a nice used dishwasher on Craig’s List.  Curtis had a lead on a good FREE one!  yah!  I hope that works out.  If not, I’ve seen them easily for $50 – $75 dollars, so we will have to move that up the list a wee bit.  In the meanwhile, we can use the bathroom sink for our cleaning up needs. 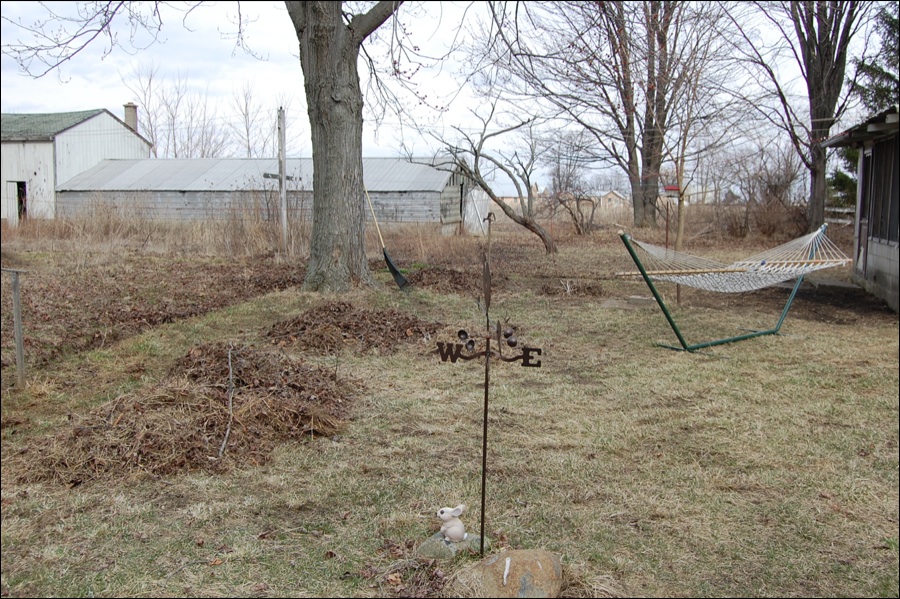 We took a little ride for lunch…  up to the city of Pioneer.  Nice little place, a good deal bigger than our nearby Fayette, and with a few more stores and such.  We had lunch at a nice little country kitchen restaurant, and then stopped in the feed store to look around.  It was pretty small, but friendly.  We got a HUGE HUGE HUGE bag of birdseed…  #40 pounds!  For $9.  We were happy.  We had brought a lot of the feeders from the Moby and were anxious to set up the free soup kitchen line for our fellow birds at the farm.

Funny thing, I can swear we are quite the amusement for the birds in the area.  We have a pair of crows that sit high in the trees and watch us for hours, talking between themselves as if we were Human TV.   And there are a lot of other birds in the area, all sitting and watching us.  We’ve seen a white dove twice now, she is very pretty.  She has a bit of brown mottling on her tail feathers, but that is just pretty on her.  Maggie said there are woodpeckers all over the place and we’ve seen a lot of blackbirds and red winged blackbirds too.  I scared a robin this afternoon, it was very funny.  I was standing near the screen porch and he came flying by to land and then looked over and saw me about 4 feet from him!  He startled and flapped off to the little pear tree, just chattering at me like he was super mad.  I’m sorry little birds, but you now have neighbors!  We’ve seen a little angled wing hawk or falcon overhead a few times…  not sure what kind, but pretty none the less.

When we got done with our little break, we got back to yard work.  I managed to get another couple tarp loads of leaves and all raked up and Maggie managed a few cart loads of sticks.  It’s hard work.  You have to rake the ground several times in every area because there are wet leaves and dead grasses and weeds, and sticks and stuff.  I’m very sure our grass will thank us, it appears it has been clogged up and littered with a mess for a while.  Make your wing muscles ache with every load, though.  I’m working on the back area, near the little ditch.  Been using a heavy garden rake to pull all the muck and dead leaves out of the ditch so that it might actually help to drain away some of the rain we’re due for in the next couple days.  Just slow going.

But you can really see the difference from raked and non-raked land for sure, so that keeps me going.  And the piles on the fencelines, they are really growing thick!  It will certainly help to keep the doggies contained and give us a nice defining edge for sure to Windhaven. 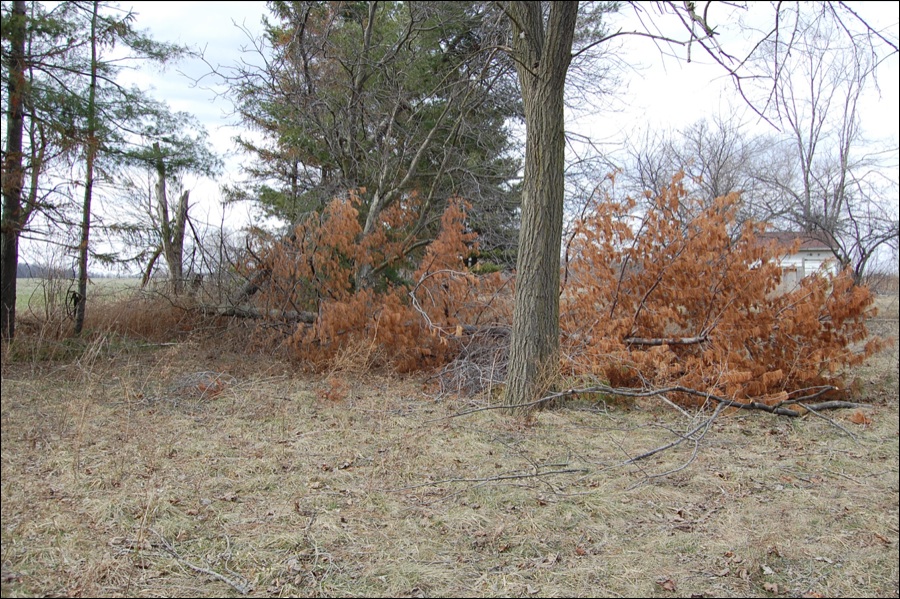 This fallen pine is going to provide a good deal of firewood for our planned bonfires!  But it’s in the second acre section, so it has to wait a bit for it’s turn at a haircut and conversion into hedge fence!  Still, it kind of looks pretty with its orangey death colors of branches.  It’s a good solid straight log.  We might keep it for something… not sure what yet though. 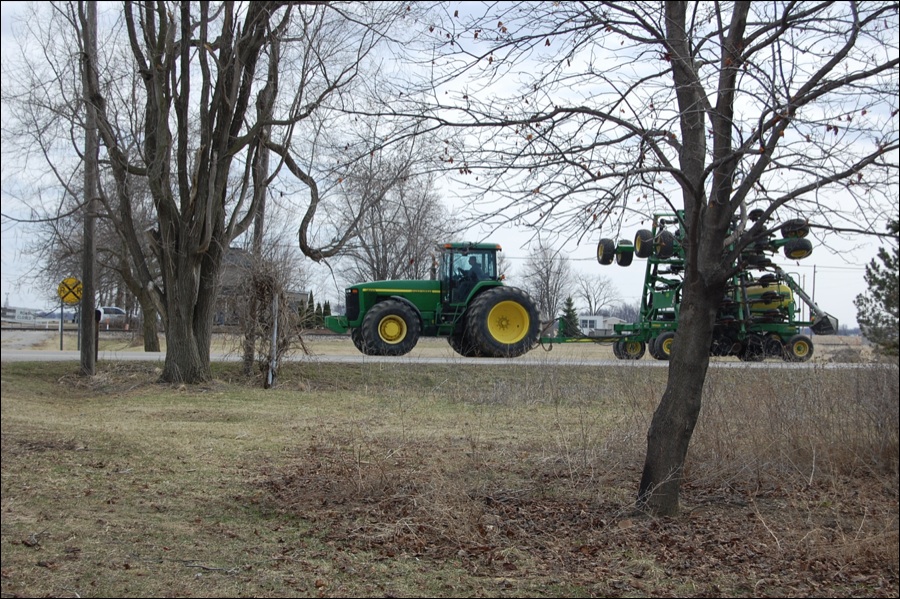 Some folk might not like the big farm equipment that rolls by, or the semi trucks on the truck route out front, or even the train that goes by a few times a day.  But we love them.  I still stop and watch when something big goes by, or when the train passes.  I wonder if the trains are on any sort of schedule, I know we will be curious to see if there are “clock” trains that we can judge the time with.  Our real farming neighbors next door have some really big rigs and equipment… they are some serious farmers with quite a large holding of acres all around us.  I’m kind of glad that we have a barren field strip and an access road between our proposed garden space and their fields though, as I’m pretty sure they will be spraying some heavy duty stuff.  Just seems to be the norm.  A little cushion is not bad, if you ask me.  I do have to do a little investigating though, I might want to move my garden because I’m concerned the area I picked is a little too low and mushy.  It’s lovely deep rich soil though, so I’m still not totally sure.  Nice sun, open space…  it would be the perfect location.  It’s nice being there before we want to plant, I can see the sun and how it hits everything and wander around looking at the soils and such.  Fun stuff for sure! 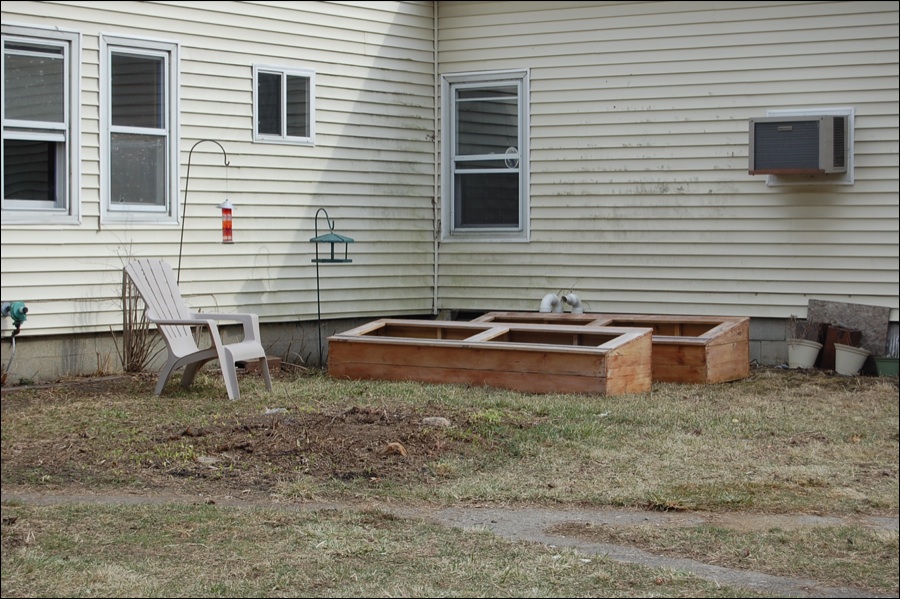 Curtis brought over my lovely cold frames from the Moby, as well as a couple apple trees in pots, and our hammock and outdoor table and umbrella.  And a few odds and ends!  Gotta love a man with a truck!  It was very helpful and it’s nice to start seeing OUR stuff scattered about and populating the place.  Feels more and more like home! 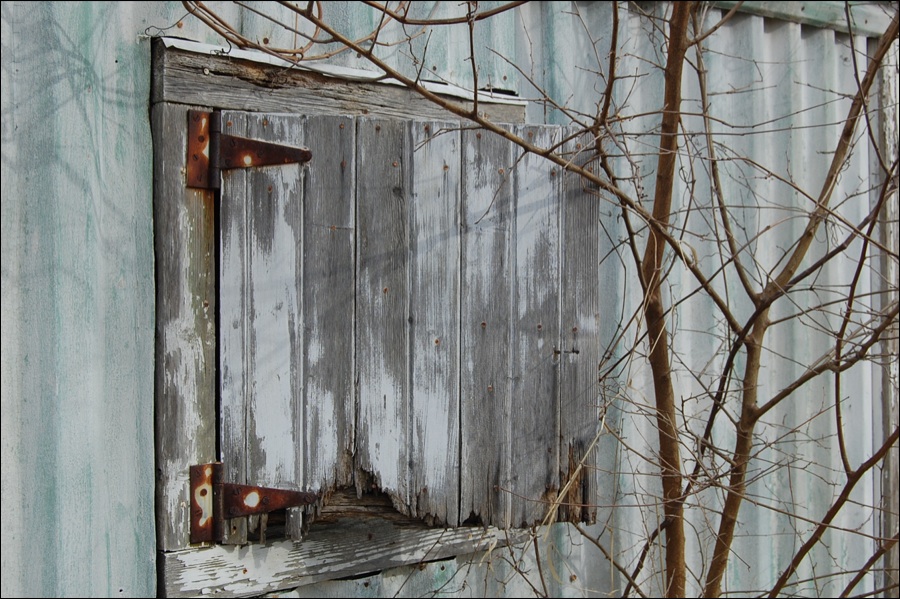 Well, the next couple days are going to be cold and rainy, so I think that means we’re staying home at the Moby and working.  Need to keep at our business and client work so that we can afford to keep working on the farm!  Plus, it’s just no fun to work in the cold rain.  Heck, we’re slated for SNOW showers possibly!  SNOW???  Shesh.   Curtis said he’d come out and try and get the new part on the furnace Sunday, and if it’s not raining, try and get a load over in the car and truck.  He also has a trailer, so that might really get a lot of stuff over there!  That would be fantastic!  I’d like to start moving a few little chairs and tables and such, that would be super helpful.  We’ll just have to see how the weather pans out.

Well, that’s all the news that’s fit to print!  Of course, we are aching and tired, and a day or two off sounds delicious!  I plan to sleep in a bit in the morning, and just take it easy!  My bum knee is complaining a bit, so a little light duty will help for sure.  And I really want to make sure that I stay up on my client’s needs as well as helping Jessy with the rock and mineral orders.  Every day is a little bit closer to getting us moved out there!