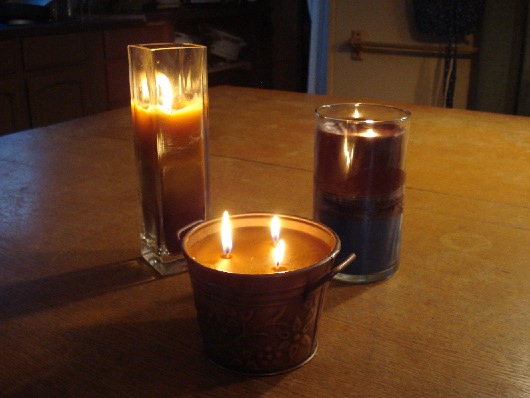 Been working pretty hard the last month or so and I just finally decided that I needed to spend a weekend away from the computer and building our business and spend a little time doing some domestic homesteading stuff as well as relaxing a bit.

Got up pretty early on Saturday, ready to start the day being domestic!  Managed to do a good full day of putzing on Saturday by about 4 in the afternoon.  Moved some furniture around, and just cleaned and organized the place.  The girls were gone for the weekend, so it was good to just crank up the bluegrass and get into it.  Got my dishes caught up, finally… (hand washing dishes can easily get behind when you’re too busy with other things!)  and managed to put away my clean clothes from the day before adventure at the laundrymat.  I managed to make a couple candles from some stubs that I warmed slowly in the toaster oven and then filled up my containers.  The moby smelled delightful as the nicely scented wax melted and I made up a couple nice candles to keep me for a couple weeks. 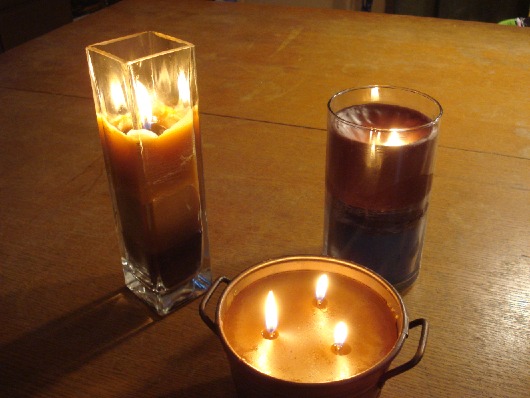 Been watching a lot of Planet Green on our basic cheapie cable and it’s a pretty cool channel.  I have to be careful though, because it can be a little depressing to hear about how terrible everything is in the air and ocean and the earth and all!  Makes me want to give up on plastic and everything!!!

I do want to think about making some little light weight produce bags for the grocery store though.  I think you could easily make little lightweight cotton mesh bags in a variety of sizes for when you are going to the farm market.  I might try this weekend coming up…  a little sewing project sounds fun.

Today, I decided that I would try and reset my grape and strawberry jams that didn’t set in August.  (My raspberry jam was super easy and set beautifully!)  For some reason, the second batch just didn’t set good.  I had popped it all in the freezer to try again at a later point.  I grabbed another box of pectin to give it another try.  I read online that you can over process jam and it won’t set good, and that you can reprocess it and it might work again. 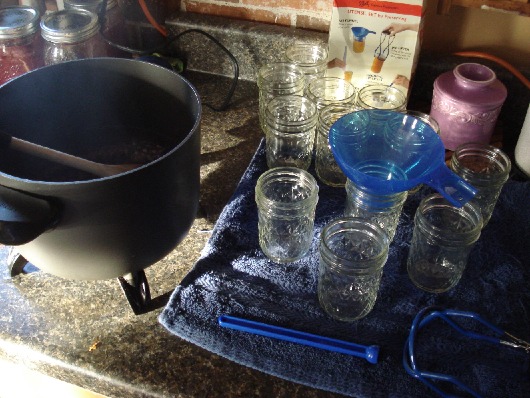 I was kind of excited to try my new accessory kit!  Yeah, I finally broke down and got the little jar lifters, magnetic wand and the little wide mouth funnel that makes it MUCH easier to work with canning.  It was super reasonable, like $6.  Much easier, I will admit.  I still just use my little hot Presto pot to water bath the jars, but maybe someday I’ll actually get a pressure canner.  We’ll see… there’s always garage sale and ebay!  I don’t see the reason to get one anytime soon though.  The freezer is good for most of my great deals I find here and there.

My kids were kidding me something feirce when they got home and the stuff still hasn’t thickened up good.  They said they didn’t mind…   I just made 14 pints of pancake sauce!  HAHA…  silly kids.  Yeah, there is no doubt, that would be some great pancake sauce and super yummy as well.  I tasted a little of the dribbles left in the pot and it was SUPER good.  If it’s not set by the morning… I think pancakes just might be on the menu! 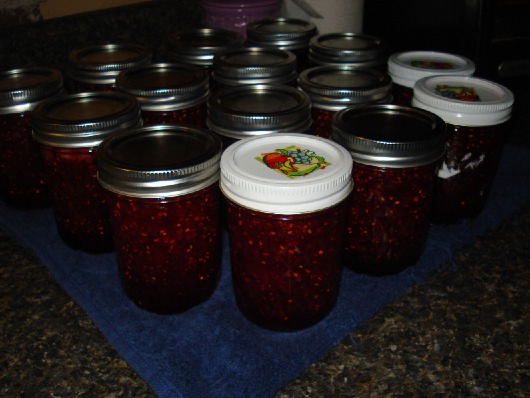 I also tried something new…  cooking bacon in the oven!

I kept reading about it in some of the cooking blogs and I never thought to give it a try until this weekend.  You just lay the little strips on a pan and pop them in the oven at about 350 or 400.  I think I did it about 350 to be honest.  And you just let them cook.  They stay nice and flat and all pretty looking.  And it was super easy.  It took about 15 minutes or so.  Apparently it’s the way to make nice strips for say, sandwiches?  And it’s hard to burn it or make some too crisp, etc., like in a fry pan. 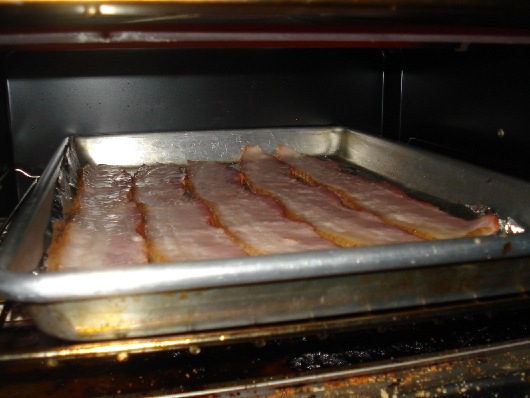 Well, I must say, it was very very easy.  I think that it might be my new form of bacon makin’!  Especially since I can pop it in the oven to cook while I’m doing the rest of breakfast, like cooking some eggs or maybe french toast or pancakes.  Once less thing to do.  Gypsy approved…  she got a piece and agreed that it was pretty durn tasty.  But then dogs like anything bacon related.  I will add my two cents.. it was pretty tasty.  I’ll bet this is how restaurants make it as well.  It was just so easy.  I saw one recipe that you sprinkled a little brown sugar on before you baked it…  that would probably be pretty durn tasty as well!  I might give that a try and see how that comes out. 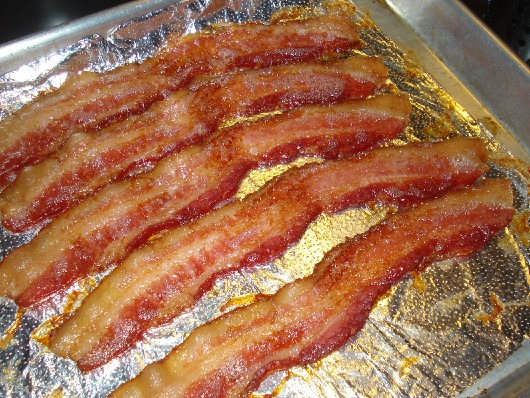 Got to spend some time talking with my Dad… he’s recovering from a battle with cancer and is still kinda moving a little slow and all, just getting over the chemo and radiation treatments.  He’s a reader of my blog!  I just love that.  Hi Dad!  Being a bit of space apart, we just haven’t seen a lot of each other, but it’s nice to be able to have some stuff to talk about and all, and he get’s a chance to see stuff about our lives up here too.  Another great thing about the internet, if you ask me.

Well, got a short week coming up and that will be good too…  we’ll work hard for a few days to get as many orders out as we can.   And then it will be nice to have a few days off for the Thanksgiving holiday.  The girls are going to be with me and we’re going to do a small turkey and all the trimmings and hang out, maybe play a huge game of Settlers of Cataan!  (We love that game and it’s a very serious thing for us!)  I’m sure we’ll be cooking up some goodies too!

Well, it was nice to have a weekend off and time to play around with some cooking and some organizing and such.  It is going to be nice to start the week all refreshed and ready to go.  And with the moby all cleaned up and ready to take on the week!  Hope you all are ready to kick off this short week as well!  Just think… it’s only about a month till Christmas!