↓
Home→Homeschool→Working on a New Geology Game! 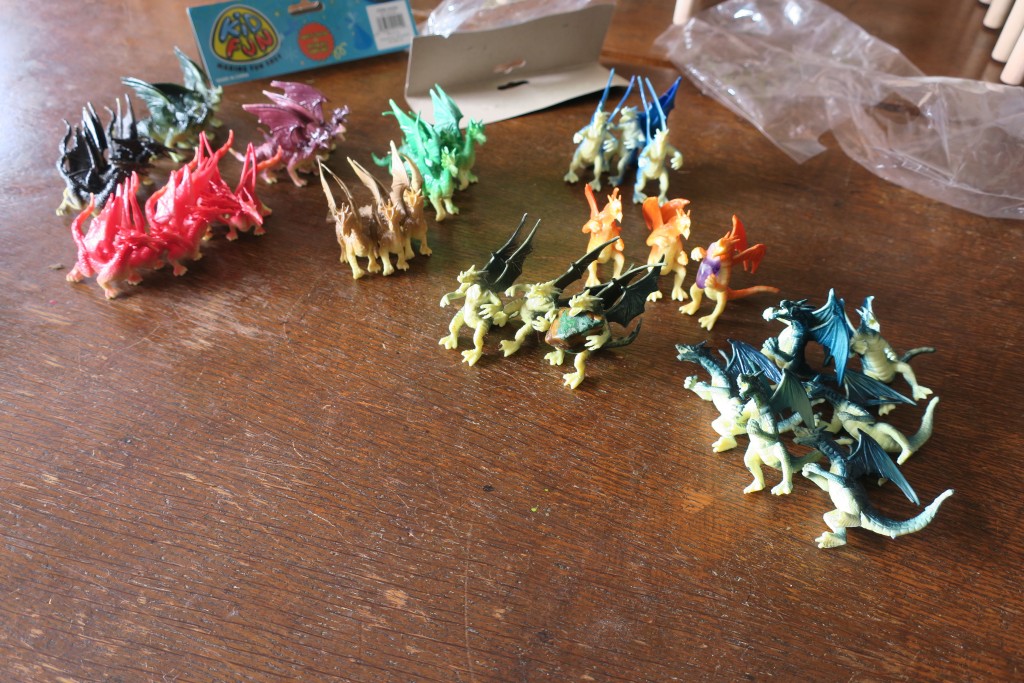 As you might know, my daughter Jessy’s company is called Dragon Mountain Treasures.  She makes and sells rock, mineral and fossil kits for kids!  She also designed this fun card game called GeoMaster that is doing very nicely and is well recieved!

Well, she’s done it again.  She has been working on a board game all about geology with a fantasy flair and it is called Dragon Mountain Treasure!  Imagine that!  You play a dragon and you go around collecting rocks and minerals for your treasure horder and try to become the head dragon!  It’s really quite a lot of fun! 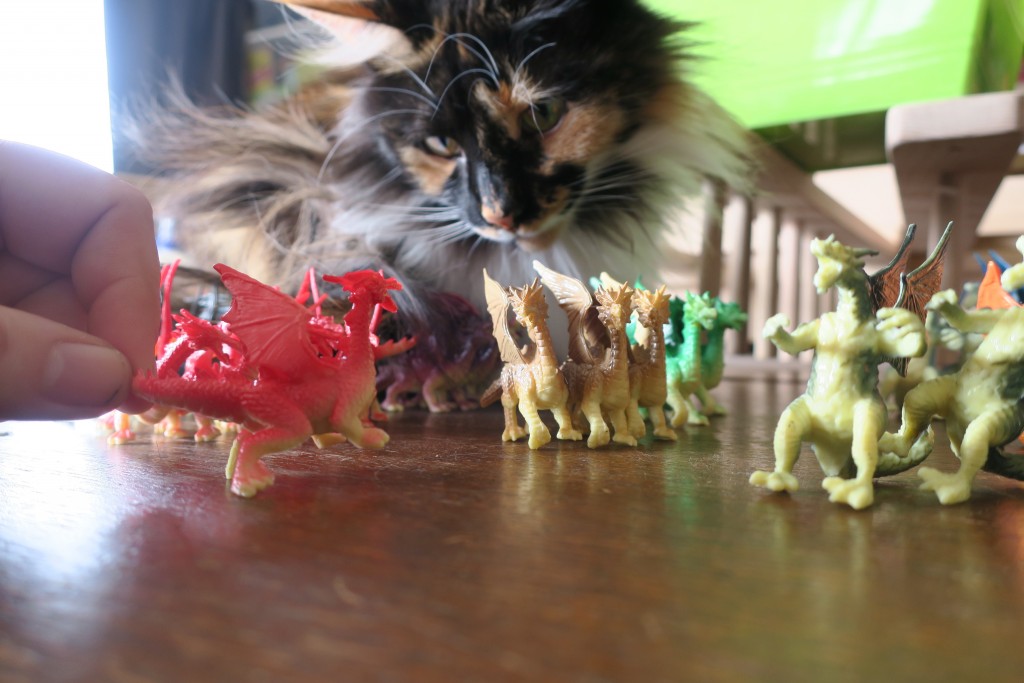 We just got the little dragons in a bit ago and even the kitty thinks they are pretty keen!

It will also be a fun educational game as you play a dragon with a geological type they specialize in…  like metamorphic or igneous and you collect treasure cards that offer a bunch of different types of specimens, each with information on the card about that specimen to learn about! 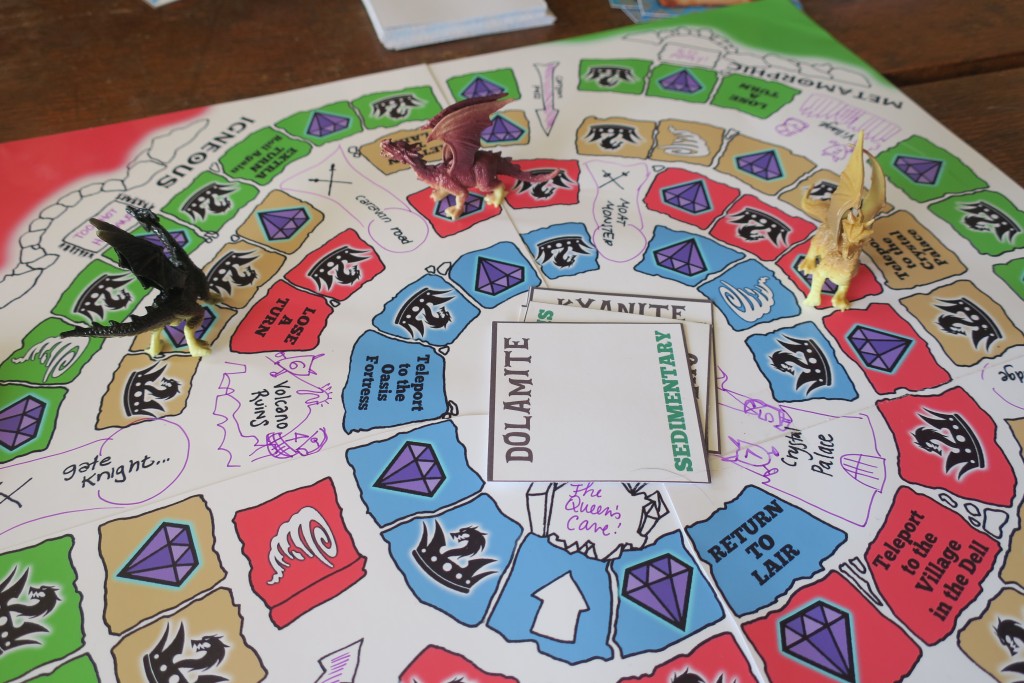 I have been doing all the artwork and we started with a very rough handdrawn board and cards and have been working to get it closer to the finished project.  This board above is the third proof!  It hadn’t been sent to the printers yet, just printed on our own color printer, but it’s very close. 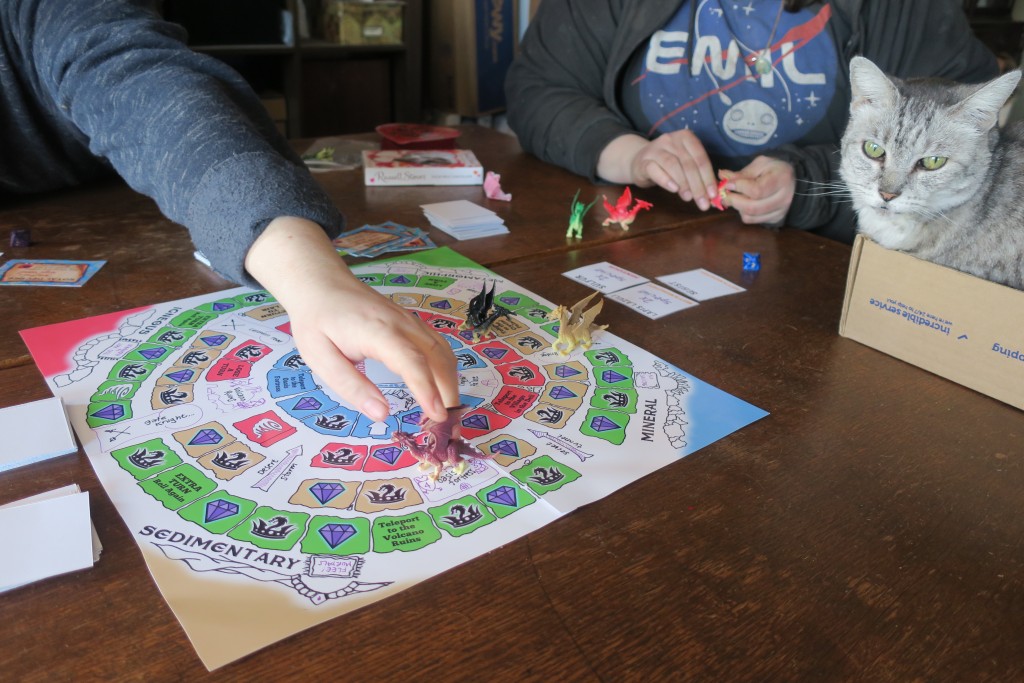 Like any game, you have to play test it.  Over and over and over again!  You try and break the system, to find flaws and fix them. Luna kitty is making sure we don’t cheat! 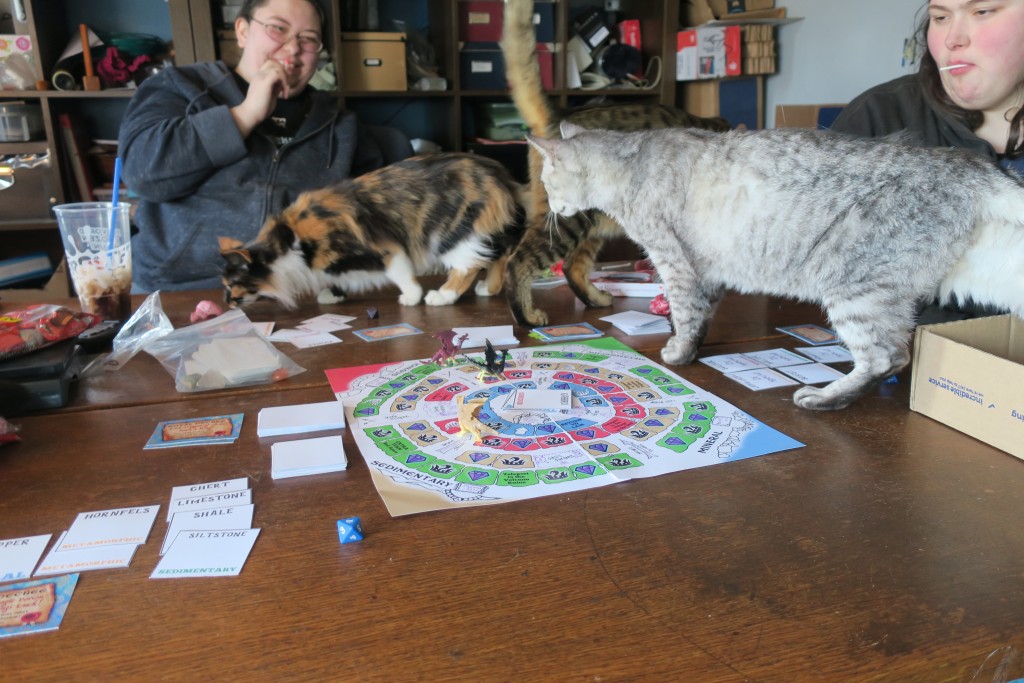 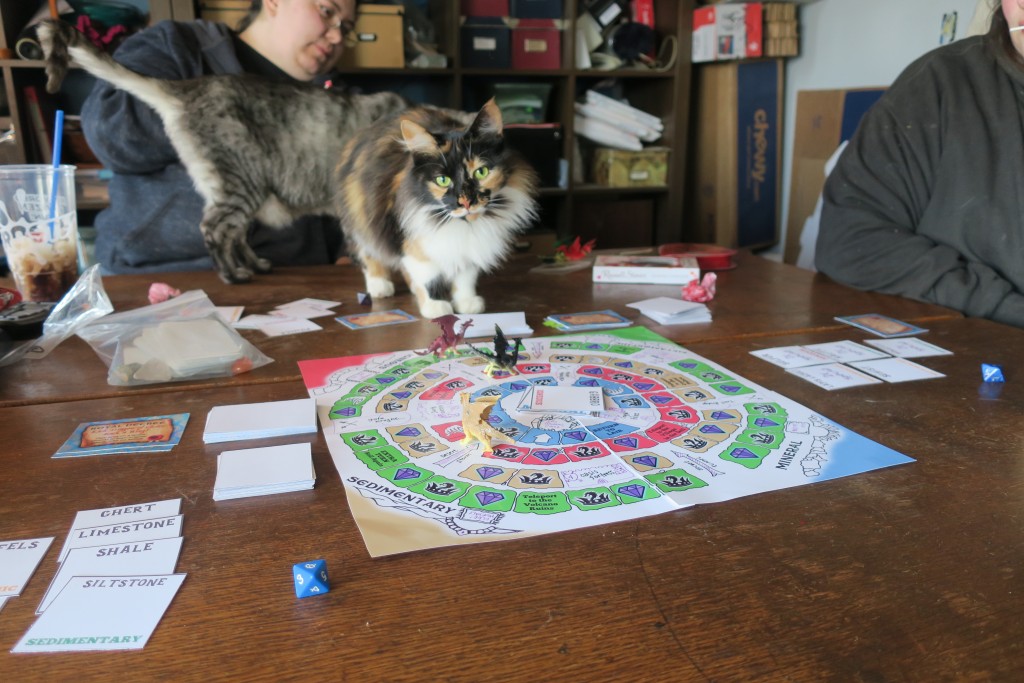 It’s hard to do anything around here without kitty supervision!

But it’s sure fun and we try and get others to play and see if they understand the rule or not.  And we try two players, three, and four to make sure it doesn’t play weird with different combinations of players.

And look now!  We got back from the printers the first proof!  A real board!  And colorful cards! 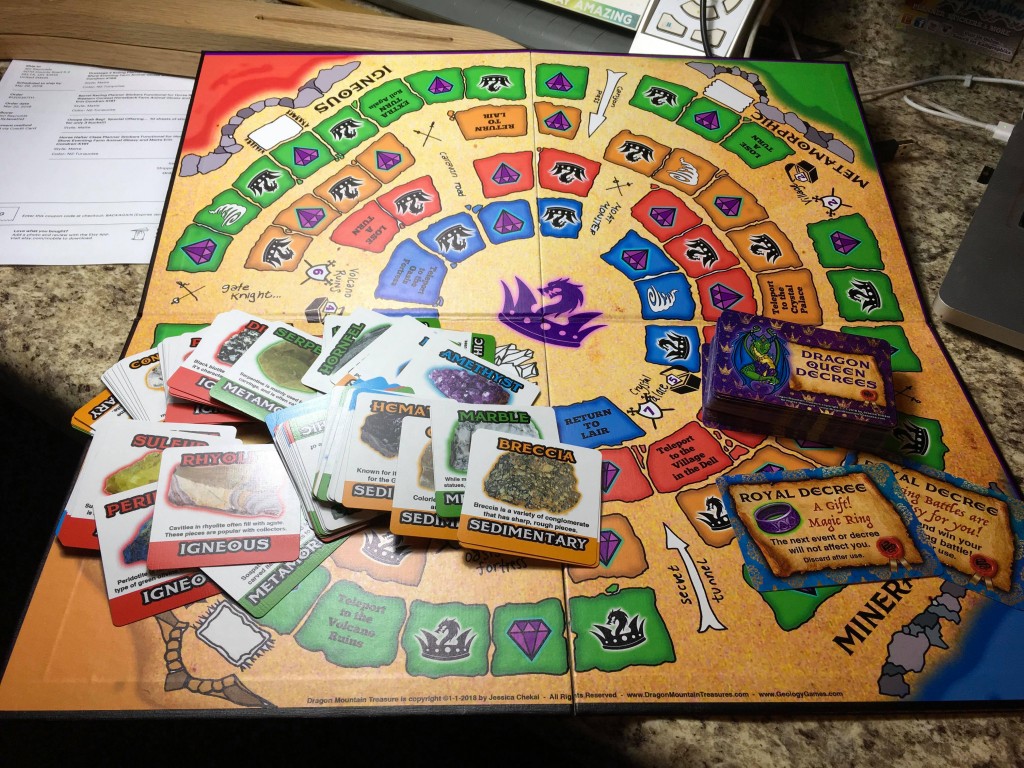 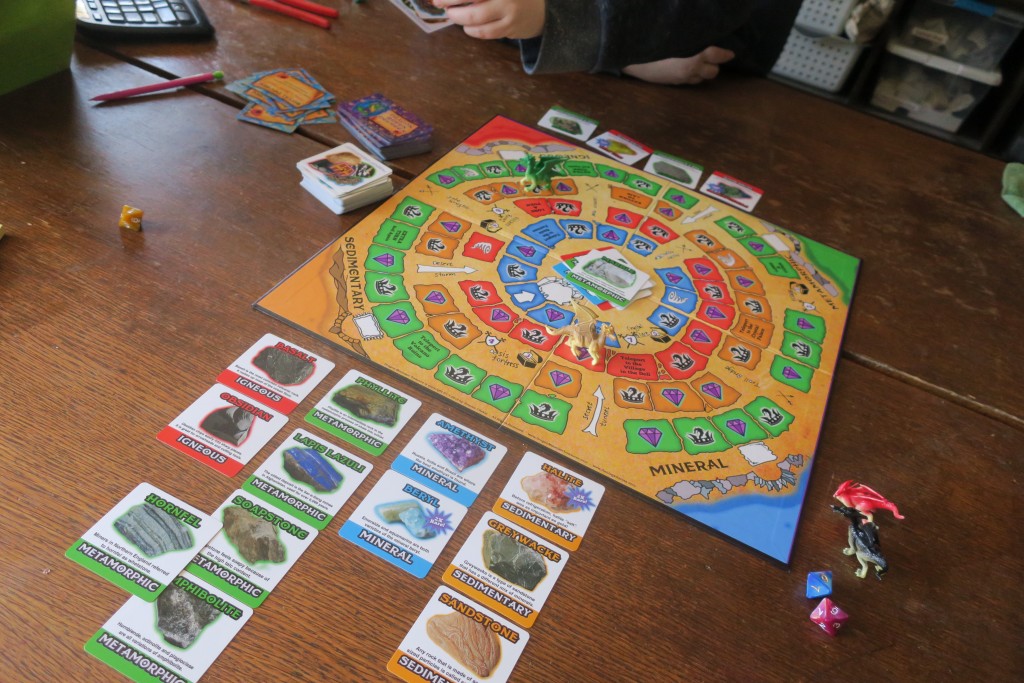 It is SO exciting!  The artwork for the two card decks is pretty much complete.  There are a few little grammar errors, and things that we want to adjust or change, but not too many.  They really turned out nice.  And the board is about 75% complete!  I am going to be designing and illustrating four dragons for the four corners of the board as well as a few landmarks on the board that are now just basic simple drawings. 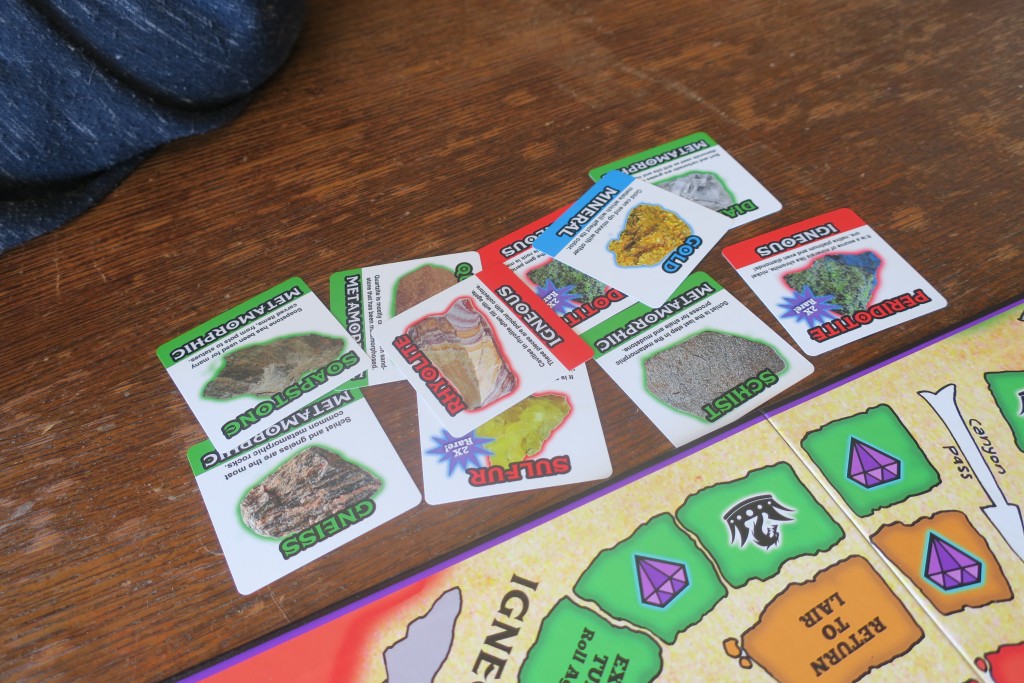 Jessy like to put her treasure cards in a jumbled mess!  However…  I prefer to organize my cards! 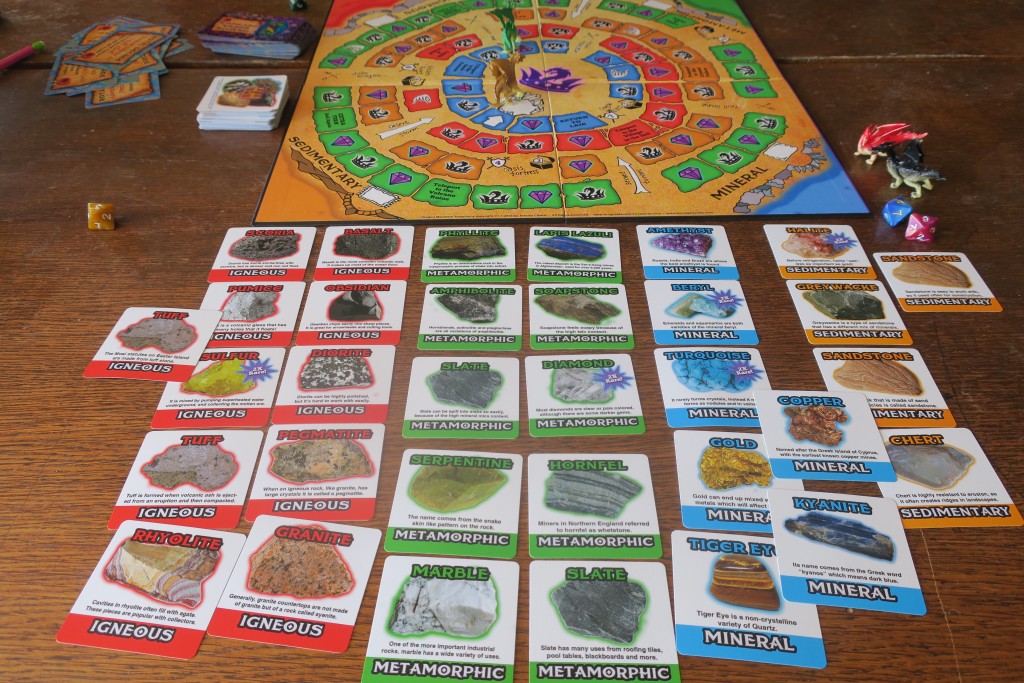 Look!  I WON!   I can’t believe it.  After playing like 25 times, I finally won a game!  Well, I don’t remember winning, I might have, but this was a really spectacular win!  Look at all that treasure! 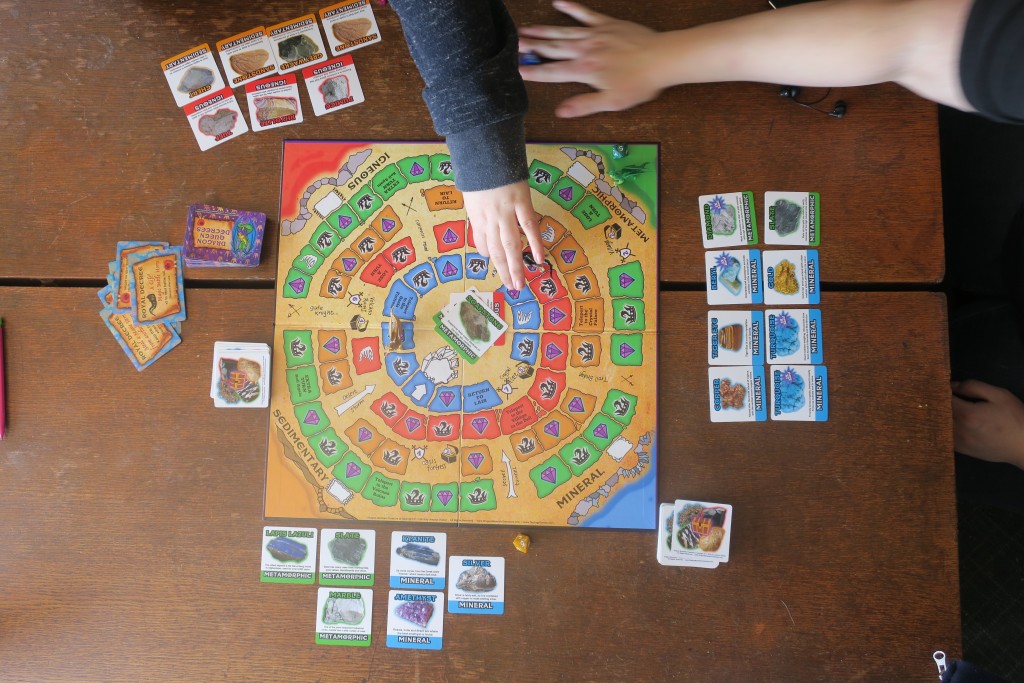 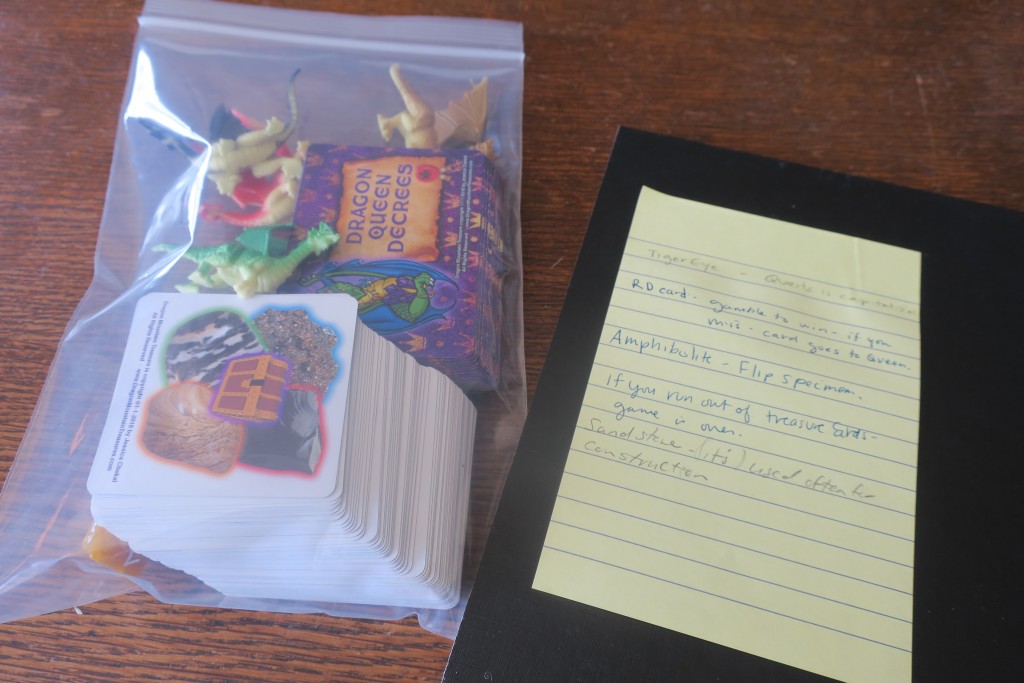 Well, it’s still got a bunch of testing to do, some artwork to design, a second proof and then the instructions to finalize as well as the box art!  Hardly nothing!  Hahaha…  okay, well, that is a bit.  But we will chip away at it.  We are really hoping to have it available around the first of June!  We shall see how that deadline goes!  Just a fun game for kids and adults alike.  We love to design games that kids can play with adults and the adults have fun, too.  Nothing worse than trying to play a kid game and you are just so bored with it.  This is fun, has twists and turns and is very playable for young and old.  I think Jessy has another hit!  Yah!