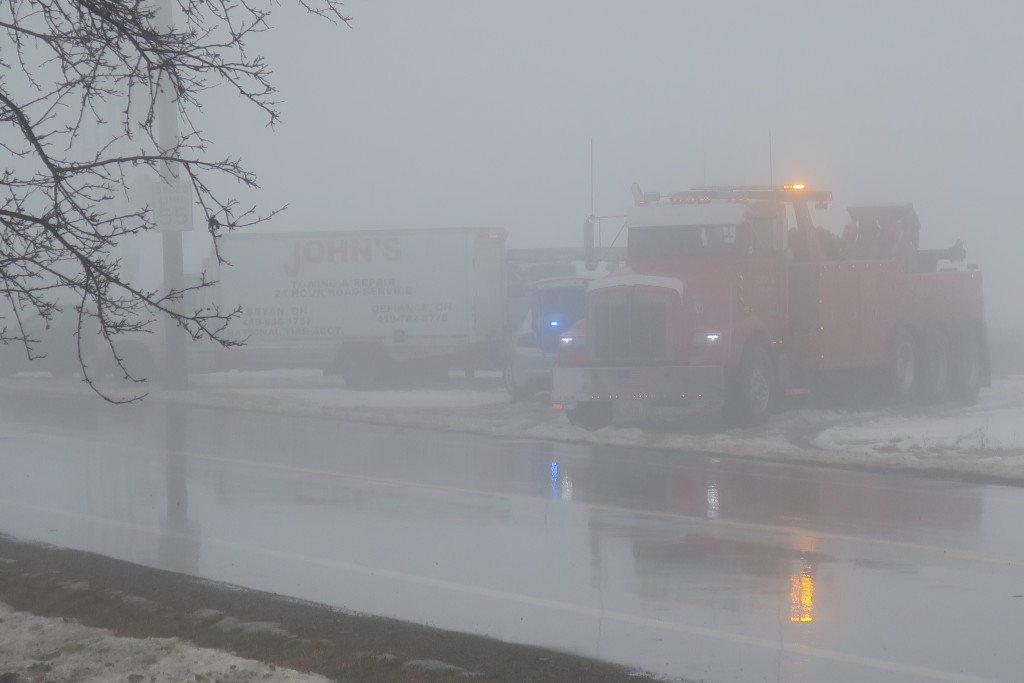 What a scary couple of days here in the middle of February!  We had a very warm batch of weather right after a good snowfall.  It resulted in a very very heavy blanket of fog all over the county.  What was so terrifying was that all along our very busy route, people were driving like fools!  And the big trucks were sailing by when the visibility was so low.  Just so dangerous.

Our main office for shipping and work is right in the front of the house and really only about 15 feet from the road.  And we can see and watch out front while we work.

Well, the first day, we woke to find a massive traffic jam in front of our house!  Trucks lined up for miles to the west of us and east.  And it was all because of an accident at the train tracks!  Honestly, it’s one of our biggest worries living right at an active train crossing.  What if something got hit or a train derailed.  It was hard to know what was going on!  It was SO foggy… 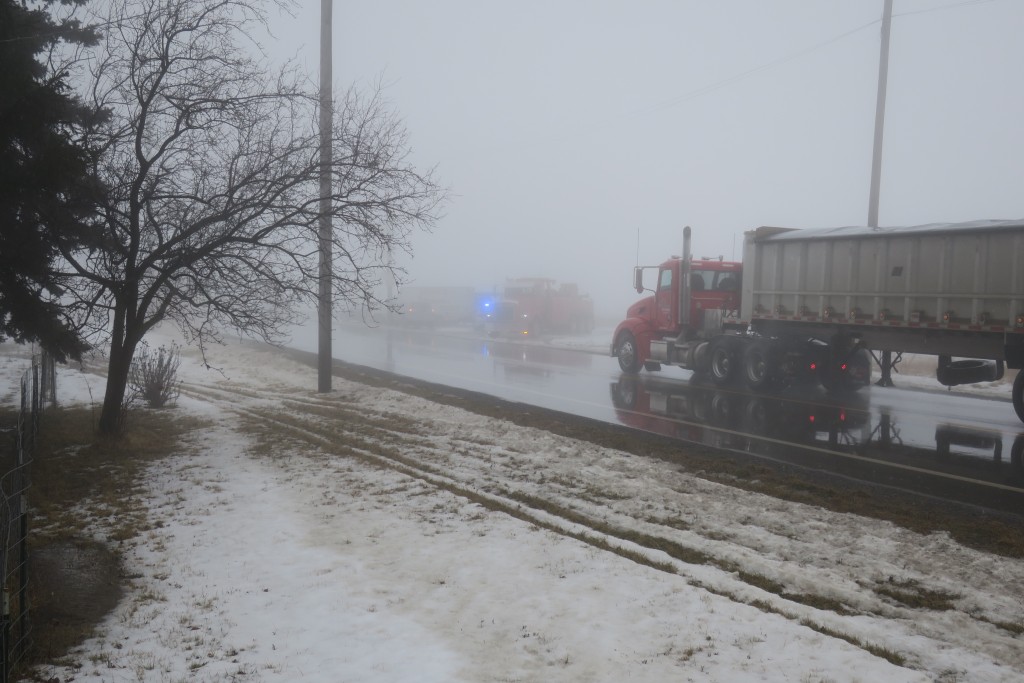 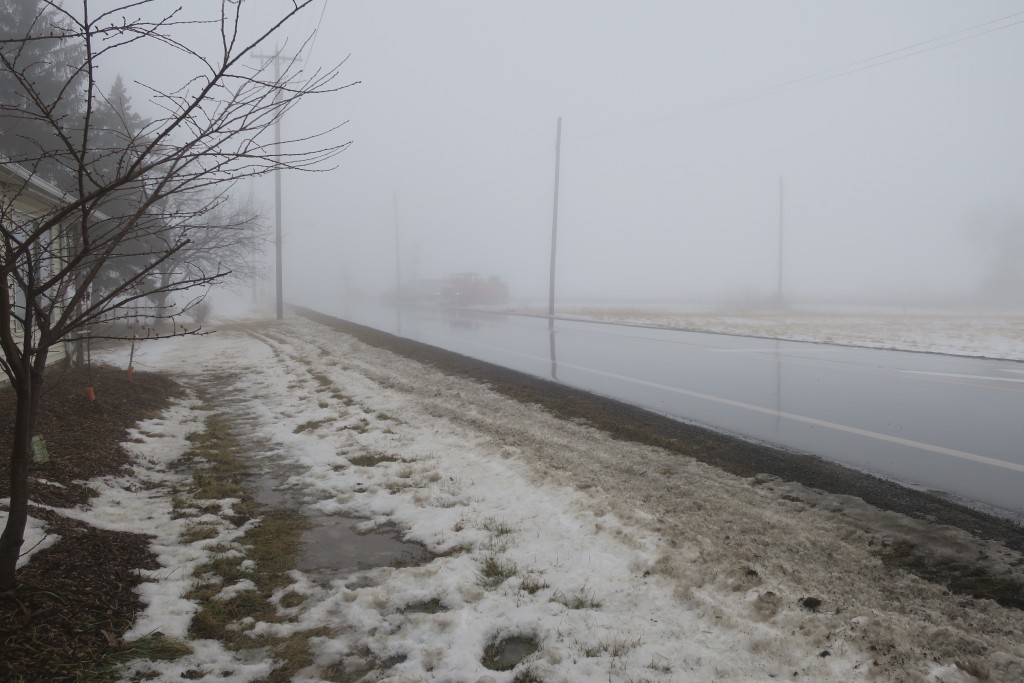 Well, it took a while, but we discovered that a truck hauling those huge rolls of steel apparently did not see the crossing and tried to slam his breaks to stop and one of the rolls broke free and crashed through the front of his CAB!!!  It was apparently not this fellow’s day to die because it leaned to the right some and took out the passenger side of the cab and then landed almost in the middle of the train tracks!  What a mess.  The fire department and a wrecker crew managed to get the roll back from the tracks with a lot of effort and got the destroyed truck and other rolls removed to allow traffic to begin to flow again.  Just crazy! 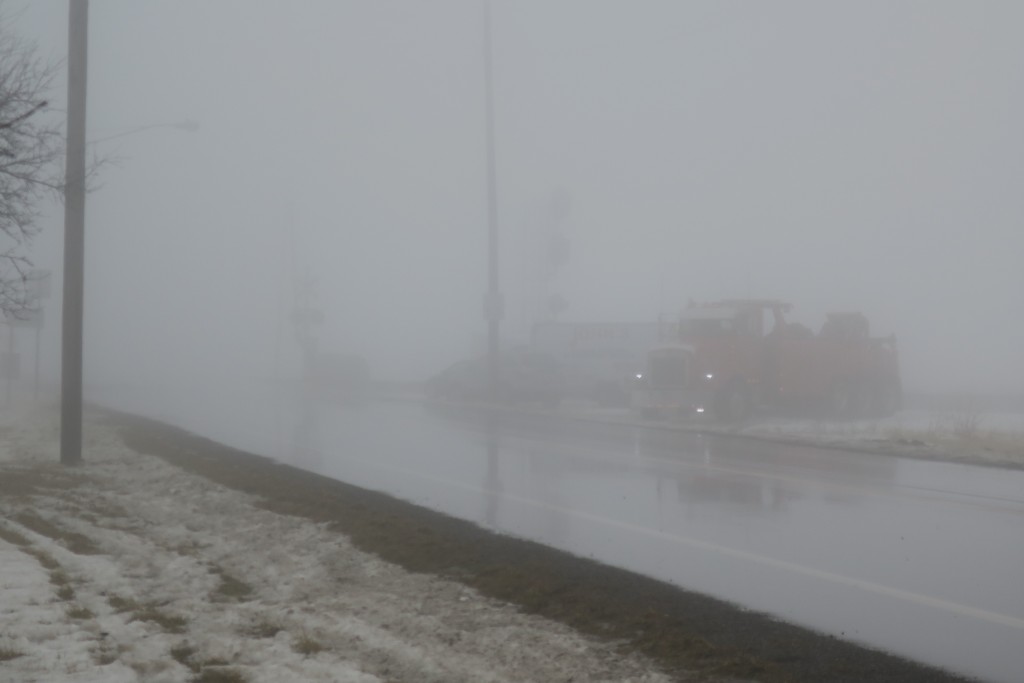 Well, the next day, the fog was WORSE!  It was so thick, you could hardly see but a few 10-20 feet in front of you.   We were all up and working and just watching these trucks and cars fly down the road only to sort of freak out when they realized there was a train crossing signal there.  Many types of semis are required to stop at the tracks and that was not happening.

We could hear the trains crossing, barely, and it was almost impossible to see the lights.  We watched several trucks barely stop in time when a train was crossing.  And then it happened.  We saw a small car pull up and it stopped for the train in the crossing.  And for some reason, we just knew something bad was going to happen and it did.  A semi was barreling down the road, going much too fast and we heard the sound of a truck desperately trying to stop but we could see nothing. 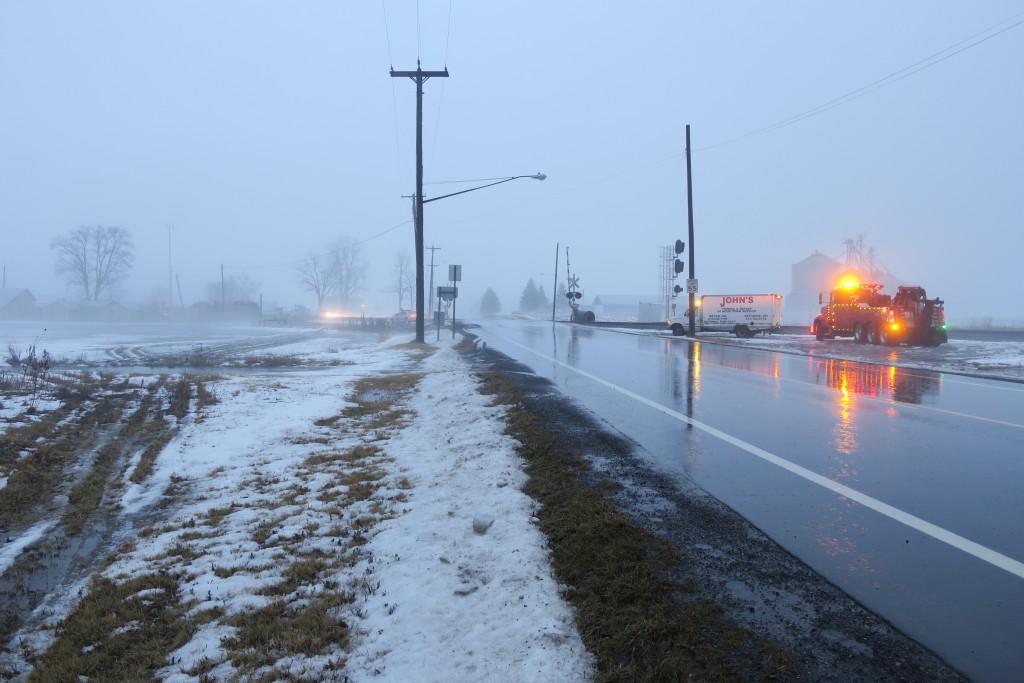 We ran outside, waiting for the crash, already on the phone to 911.  The car was still there and the driver was out, shouting at us.  We could see what happened.  The truck driver, to avoid slamming into the car and pushing it into the moving train, swerved to the left and ditched into the field parallel to the tracks!  Thing is, there is a little access road there to the switch gear for the train, and instead of ending up in a field, he had plowed down part of the road and slammed into a switching house!  He avoided several power poles and other things in his way.  Our neighbor reached the driver first and miraculously, he was unhurt, but badly shaken.  I can only imagine!!!   We were certain he had slammed into the train. 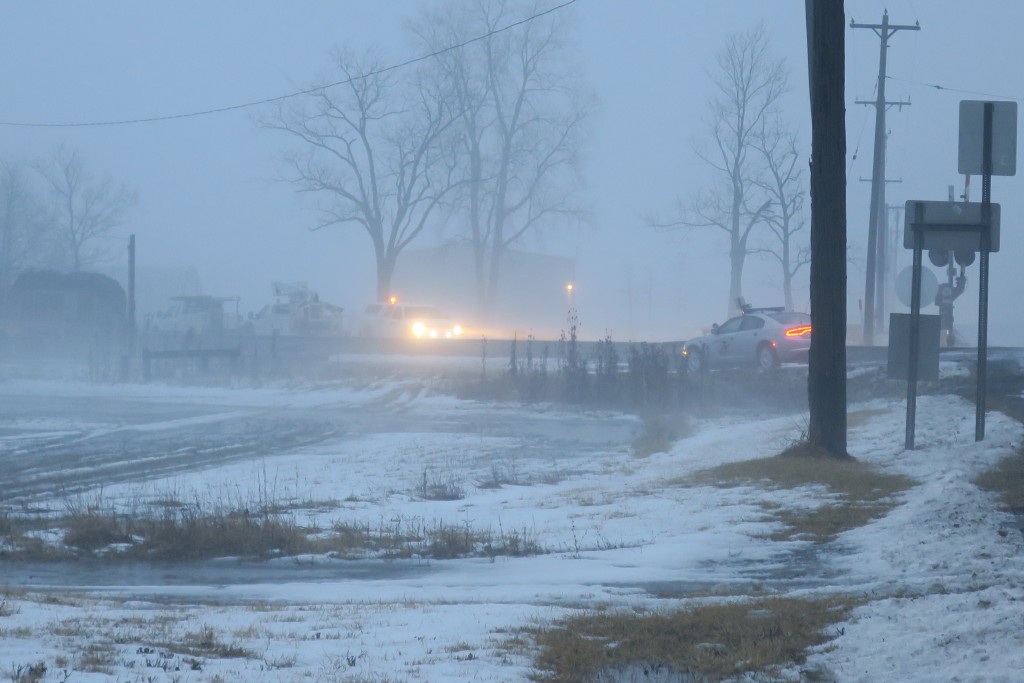 It too several hours to get the area ready for trains and then more traffic.  What was so scary was that drivers were having near misses all up and down the road because they were coming up on this accident scene, going too fast and nearly missing emergency workers and stopped rigs and cars!  Talk about a dangerous situation.  We were actually feeling a little anxious about working so close to the road for fear of a pileup!  Thank goodness, they finally got state troopers down the road to slow and block the traffic and make it safer for the emergency crews. 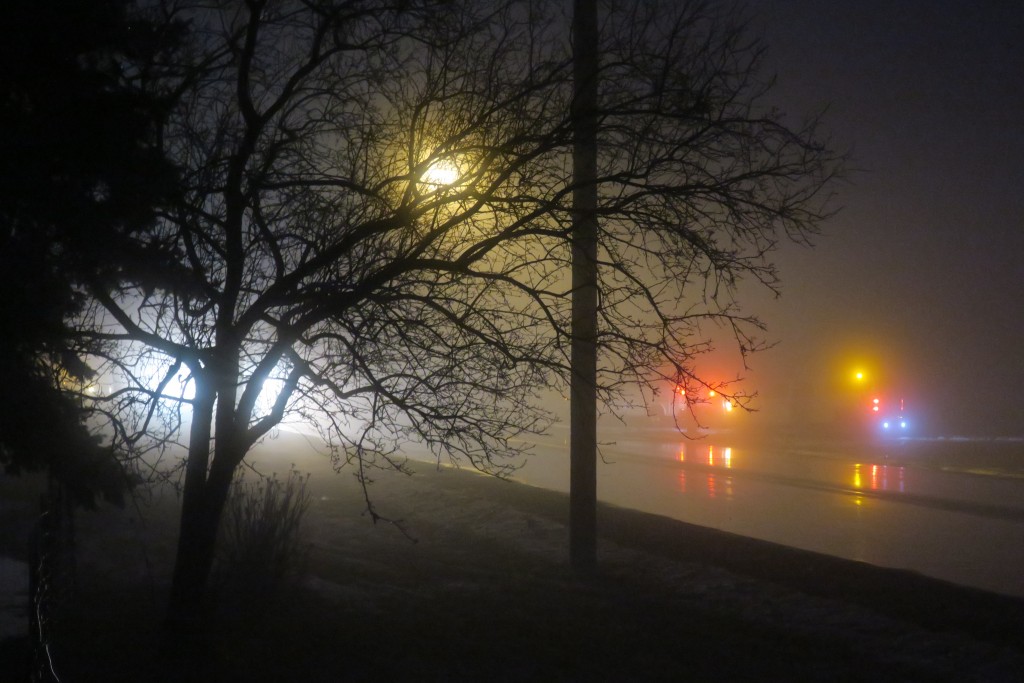 It was so eery to watch the trucks and lights in the heavy fog.  They finally got the semi towed out and the switch house back online late in the night and we had train after train go by for many hours!  I’m sure this made for one backup down the tracks. 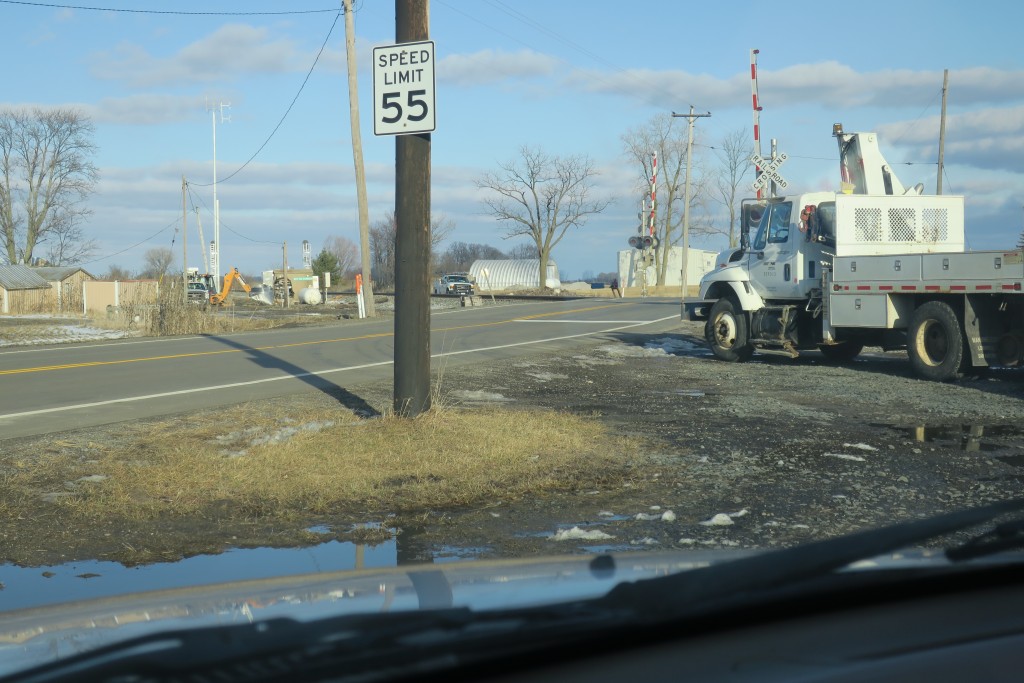 The next day we went to see what was going on, and you can see this narrow little road that he flew down.  How he missed those poles, I just do not know.  He was like 10 feet from the fast moving train, going in the same direction as he was.  He missed a propane tank and other utilities.  The Lord was with this driver that day.  And with the small car driver. 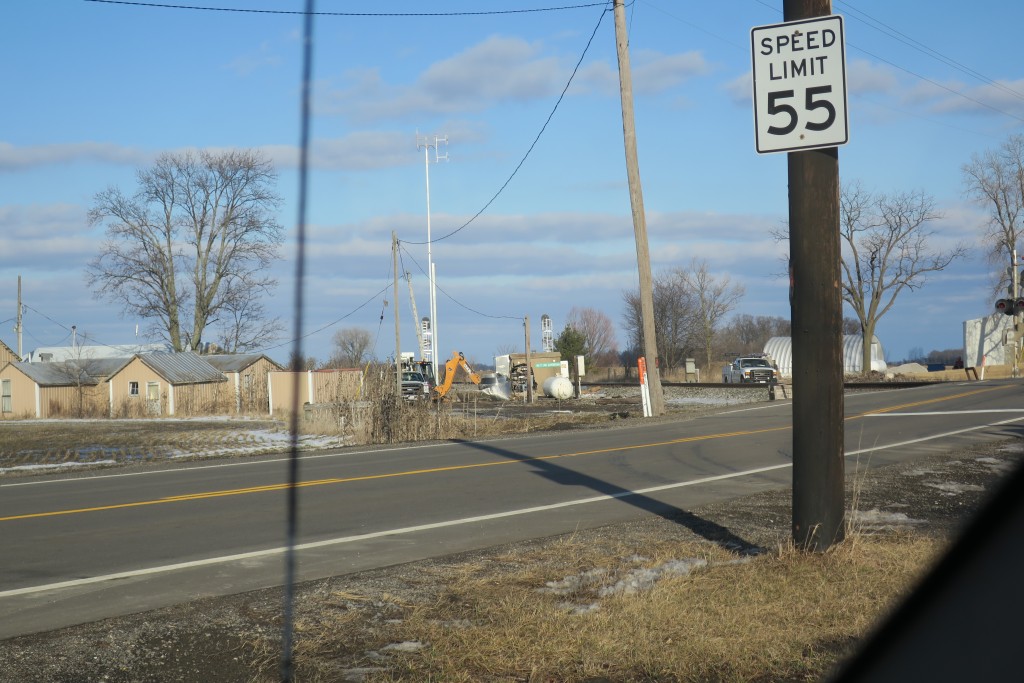 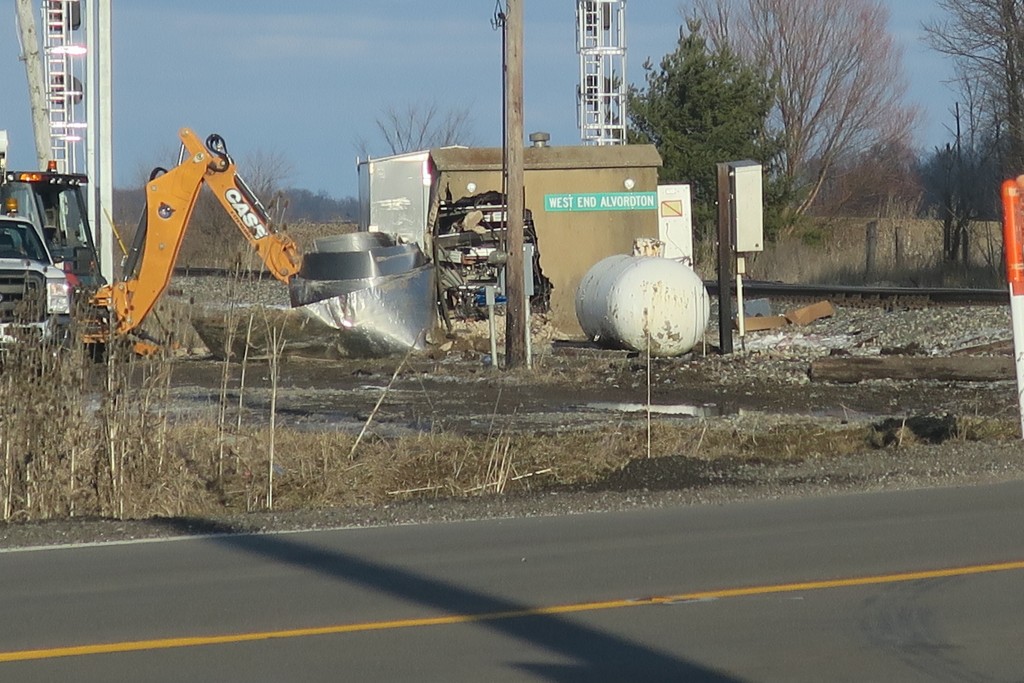 That is one sturdy little switching house!  It looks like he slammed into the side of it and then ended up resting between it and a switching tower.  What a ride.

Be careful out there in heavy fog, folks!  Please!!!