I give up.  I am calling Uncle.  This place I called garden is not a garden.  It wants to be a pasture.

After five years and so much work and effort and money and labor… it’s just not working out as a garden space.  The weeds win.  The swampy low buggy land wins.  It’s going to become and pasture. 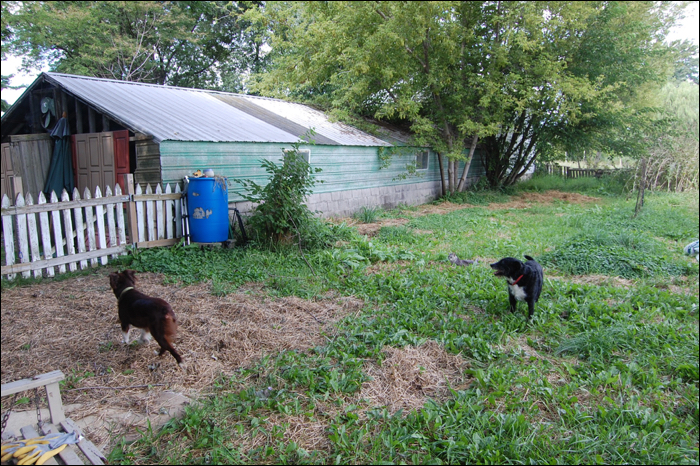 We put down 20 bales of straw all through this area and it just grew through it in less than a few weeks with all the rain we’ve gotten.  And it’s full of skeeters and weeds and is just oh my gosh…  way too much for me.

So, I finally gave up today and I am so happy!

It was all Jessy’s fault.  I came in after visiting and picking the few things we grew this year…  radish, some straggly green beans and a bunch of zinnias.  And two sad sunflowers.  I gave most of that to the pigs, which they loved.  And then I came in to lament the lost season and the feeling of dread and she said, Mom…  why don’t you pick another area to garden.  Like the courtyard.

She’s right.  I am a pretty darn good gardener, I always have been.  I have pictures of past gardens that were beautiful and productive…  heck, my mobile home gardens won second best home in the park and produced 200 pounds of food for us!  And they were simpler, smaller and very nice. 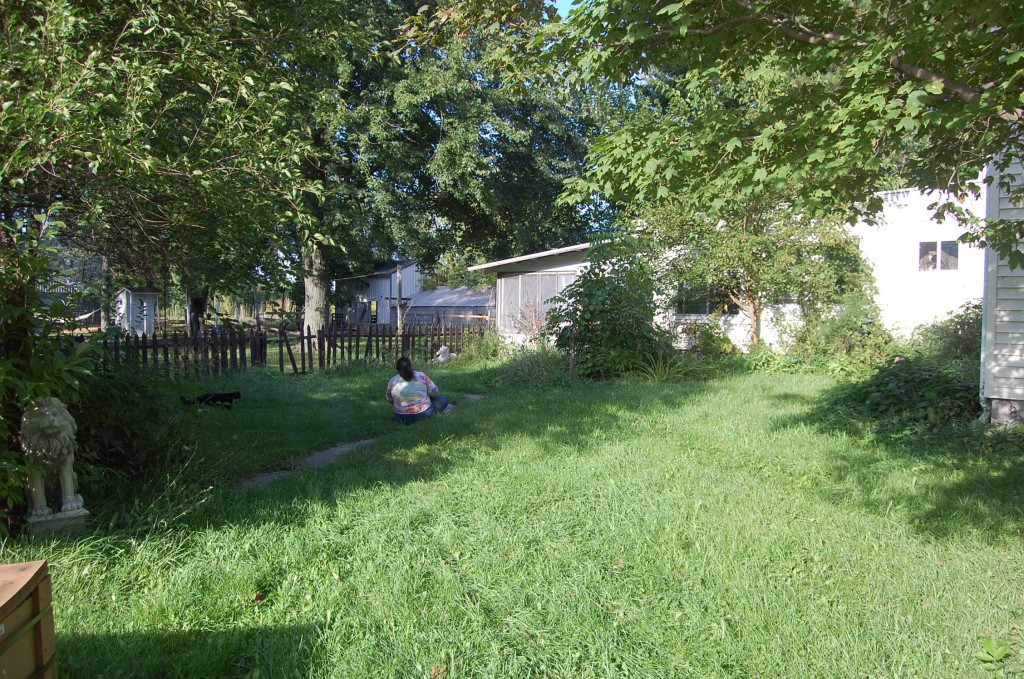 The courtyard is an area that we like but there is nothing there.  It’s just grass and overgrown bushes and such.  But it’s a smaller, nicer space.  Doesn’t flood.  Near the house, not so buggy.  It would be a delightful space to put some nice raised beds in and stone pathways.  It would be filled with flowers around the boarders.  And maybe have a nice little sitting area and a little water feature!  Hoorah!!!

I felt like a million pounds had been lifted from my shoulders.  I was so excited.  A new space, a 35 x 35 foot space that I could easily create and manage.  Close to the driveway so that I wouldn’t have to lug stuff all the way out back.  Delightful!  Less mowing!!!

(I won’t lie, everyone liked that aspect the best.  We don’t like mowing.) 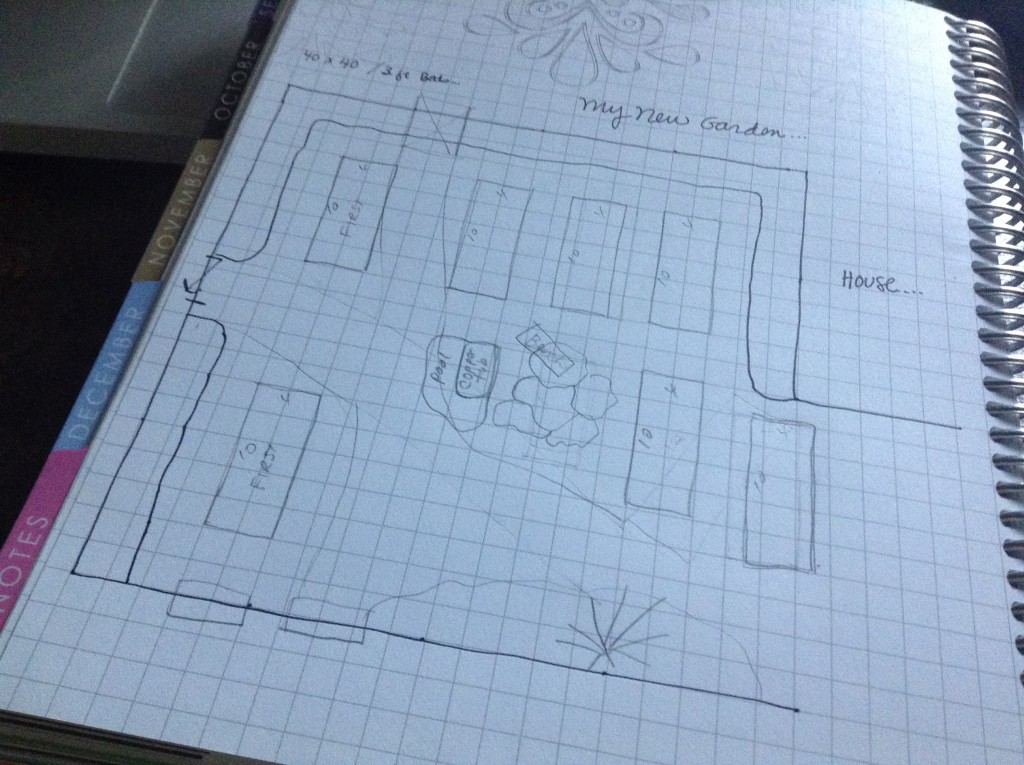 So far, I have a few plans.  I sketched it out and I’m sure to plan and replan it.  I want to get the two beds that I know I won’t change, ready soon.  That way I can use them to house some of my fruit and such from the old garden in the new space.  And I can start to see exactly how the space will work.  I’ll have two spots as well, to start putting the weeds and yard waste from all the clean up in there I will have to do.  Jessy is excited as well, she wants to help.  She never liked the garden out back because she is afraid of barn swallows!  (And they were out there too much…)  Now she can help with it all and that is wonderful.

I’ve been watching some videos on YouTube by a couple called Doug and Stacy.  Homesteaders.  And I really love their ideas and the things they do.  One thing that they have been talking about is preparing your homestead for aging in place.  Making it something that works for you, for years to come.  And I really have been thinking a lot about that.  I love this place and I hope we are here forever and ever. The girls love it as well.  However, after five years, we are getting a pretty good grasp on what works and what doesn’t.  So giving up the big big big, too big garden space really doesn’t feel like a failure.  In fact, it feels wonderful!  There are just three of us.  We don’t need a 150 by 50 foot garden!  Heck, that will serve us better as a pasture, especially for the goats!  They will be so happy out there.  The sheep and ponies as well.  It wants to be a pasture.  I have been trying for the last five years to force it into something it did not want to be.

And let me tell you, Mother Nature does what she wants.

I am just so excited…  we have sold three hog piglets this last couple days and I think that I could skin a wee bit of that to get the wood for two of the first planned raised beds.  It won’t be too much.  And that excites me even more.  As much as I loved the free wooden shipping crates that I was using, they are just falling apart.  They are not designed for long time use.  Thin woods, rough look…  they worked, but they were not great.  I noticed that they dried out pretty fast.  I will build new boxes, better and more efficient!  And close to our water pump so it will be much easier to keep an eye on it all and keep it nice.

I know that this season is pretty much done.  I will transplant a few things and probably get some garlic in a bed… but other than that, I will work to get the infractructure all ready to go.  Beds together, filled with dirt from the other garden beds.  Barriers down to kill the bit of grass here and there and rock fill.  We can work on this all the way until snow flies!  And be ready for spring.

In a day or two, after I move a few plants and check the eastern fence to make sure it’s solid, we will let the goats in to start working on the weeds.  They will be in heaven.  They all stand at the gate when I am in there, drooling and calling to me.  They knew a long time ago that I was fighting a loosing battle.  They wanted this space.  Well, now they are going to get it!  And the sheep will make short order of the grass…  It’s a perfect situation!!!

Isn’t life funny?  When you think you have everything all figured out, you go and learn that it’s not the right path for your journey and it’s time to try something else.  And I know I will be happier…  Jessy and  Maggie will and the animals, too!  And when the time comes, it might just be the perfect place for my yurt… tucked in the corner of a lovely little pasture, all trimmed up and cut down by my own little hooved lawncare staff!  Wonderful!!!

I can’t wait to see my new space develop and become as nice and tidy as my old moby home gardens!!!  I miss them so much!

Here are two videos from our 2 year anniversary of the mobile home!  Talk about flashback time!  I can’t wait to turn the courtyard into a lovely little garden space!!!