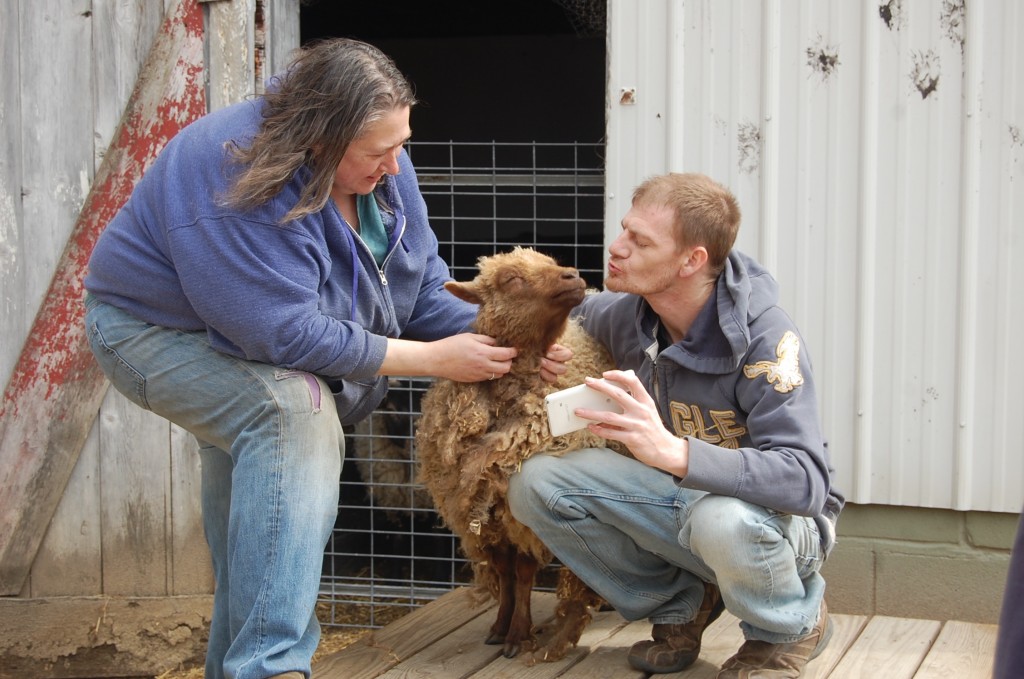 It’s getting very hard to find shearers around here.  We’ve had four now and all four have either stopped servicing our area or have quit!  It’s tough work for sure…  problem is, if you have sheep, you have to shear them somehow!

Well, my friend Justin said he’d give it a try.  He’s got some clippers and has done a few larger sheep, just not Shetlands.  They are tiny in the sheep world.  So we planned for a day and got everything ready and said, let’s give it a try.

We picked Emma to start with.  She’s a sweet and patient little soul and has been sheared before and has always been very calm.  We thought that would be best.  And we started.  And stopped.  It was just not working out well.  She got a little nip and then another and that was it.  Sheep do get nicks while shearing sometimes, but it was just not right, we didn’t have the skill to do it without incurring any more nicks.  She didn’t seem to mind, we fussed over her and got some BagBalm and Blu-Koat on the boo boos and she got a big handful of animal crackers.  As you can see, she totally forgave us our inexperience and then even took the moment to watch a shearing video on Justin’s phone.  I guess she thought that sheep being sheared was cute.  She’s a goofball of a sheep.

Well, Justin and his son and a friend were here and said, hey, let us help you with something else!   I love friends like that!   And of course, we did have something that we dearly wanted to get done!  Mulch out our front beds!!!

Every year they get away from us. They just get all weedy and nasty looking.  I would love to plant some bushes and such up front, but we just don’t have the budget for it right now, so in the meanwhile, it would be nice if it was just HEAVILY mulched out, so that the weeds would not grow!  And the village over next to ours has huge free compost and mulch piles!  I asked and they said it would be fine for us to get a few truck loads.  Yippee!   So, off we went with shovels and a pitchfork!!! 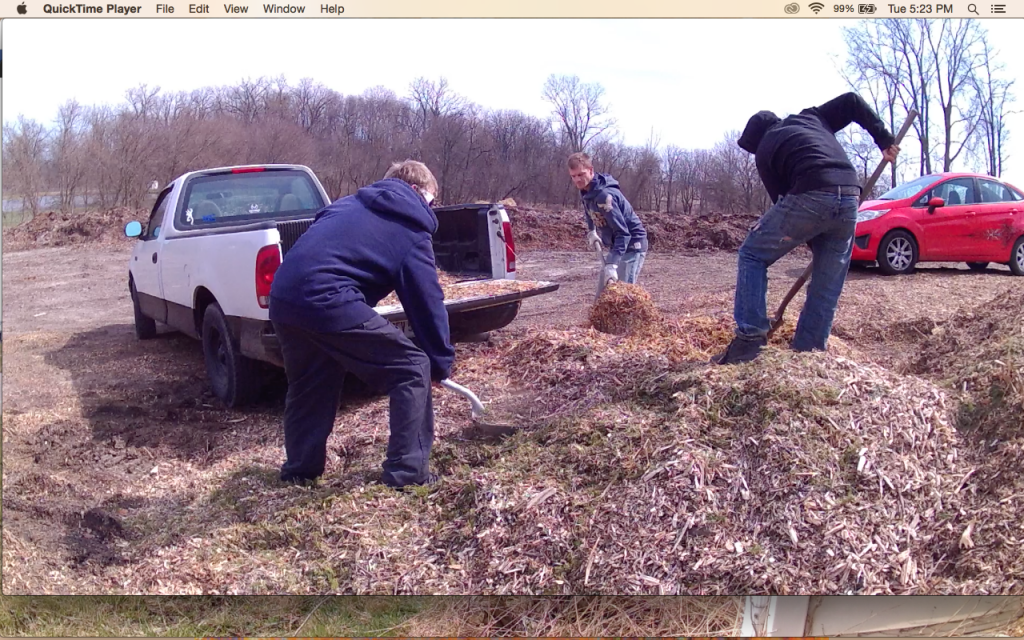 Three loads later, we have a LOVELY clean simple look around the house.  I wish I had taken a before shot, but well, we were all busy!  Just add a bunch of scraggly left over winter weeds and such…  we just tore it all out fast and then piled up a nice, big thick layer of mulch!  I think it looks so lovely.  It looks like a lot less work all summer long!!! 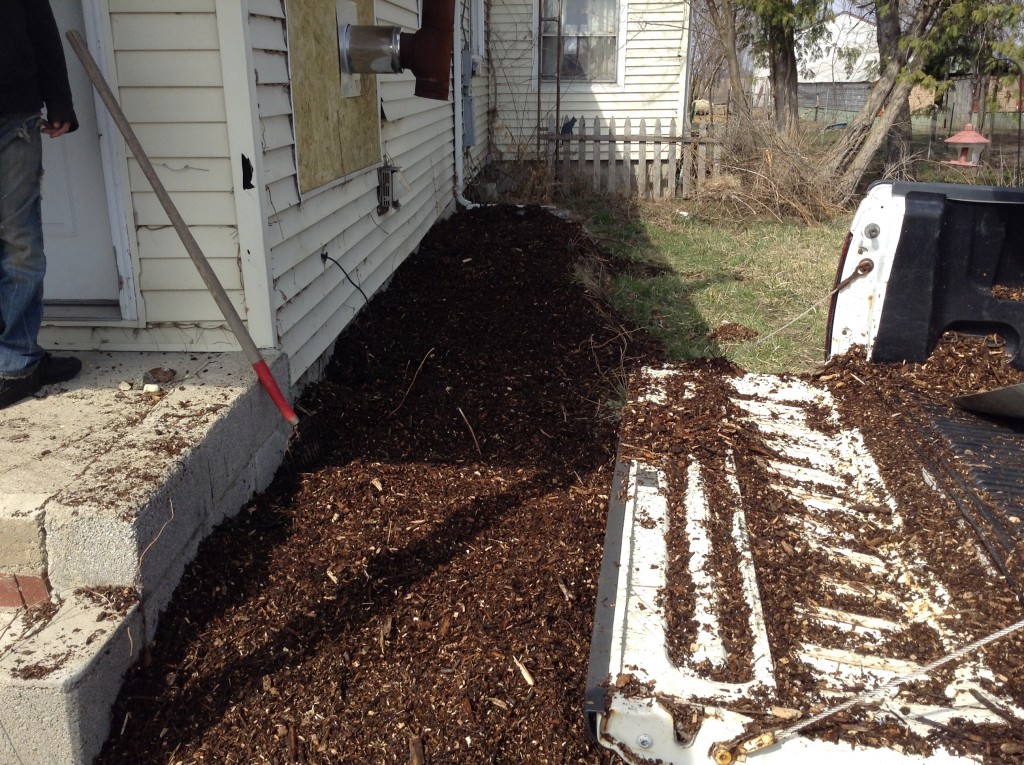 We even did the side here, which is always overgrown…  and then Maggie and I finished the last load in the courtyard!  It looks so nice.  Just love our truck and our friends!!! 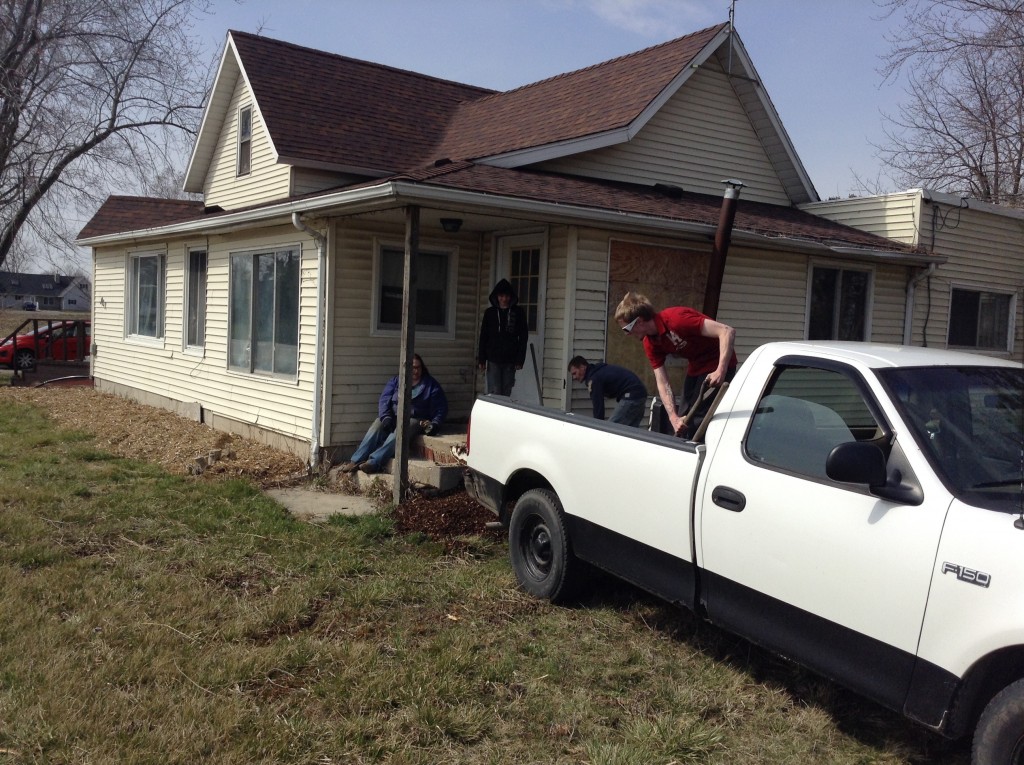 When we got all done, we had a nice big lunch of sticky chicken and potato salad and yummy cake that Jessy made for us.  I’m not sure what we will end up doing for shearing, but we will figure something out.  Still have a little time… 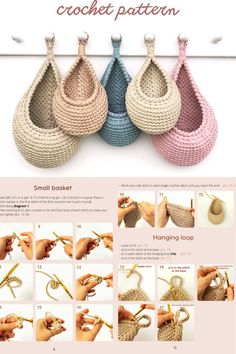 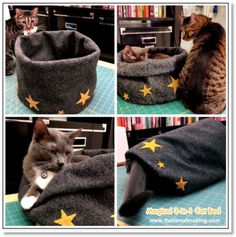 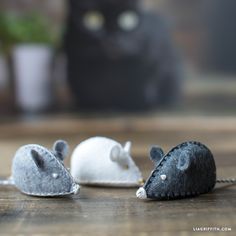 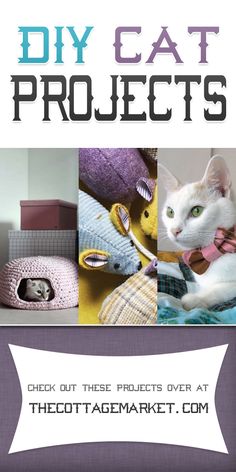 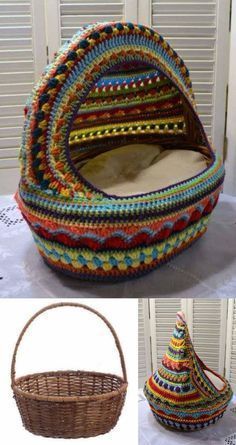