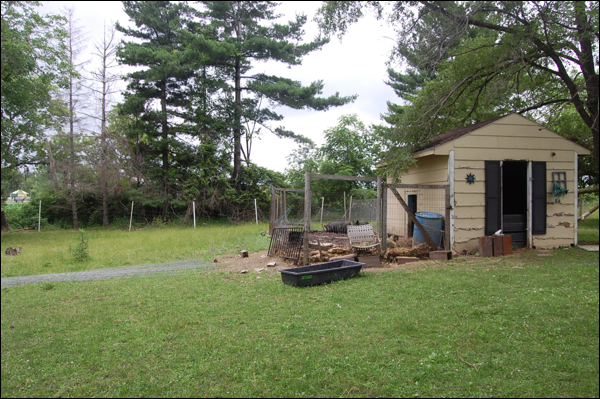 For a good long time we have wanted to upgrade our pig pen.   It worked but it was a hobbled together mess of old, new and used fencing and the hogs are tough on things like that.  It was just an eyesore and we were ready to upgrade it and make it nicer.  Our American Guinea Hogs are some of the best animals we have here at the ranch.  Easy to take care of, good money makers for us and just pleasant to visit.  It was a big project but we were ready.

Our first litter of the year are all doing great, growing bigger and soon will be all over the yard.  We wanted to get this done before they were big enough to run around and that is going to be soon!  They are almost a week old now.

We knew what we would be doing.  We are using nothing but hog panels and good solid tposts to add a lot of area to their enclosure.   We have it, nothing is using it and it would be a good thing for them.

I love how the three adult hogs are watching their favorite human start to work on the remodel!  They love Maggie and Maggie loves them…

First up, we cut and removed all the old fencing.  It was a chore.  Some was old and it was just all a big mess, wired in, zip ties, you name it.  But we just kept clipping and pulling and finally got most of it off.   We left the posts because some we would use but others were just anchored into the ground in cement and it just wasn’t worth the effort.   If we ever want to subdivide the area, they might come in handy.  For now, I think I might make them some little hog flags to fly from the posts!

Miss Buttercup, of course, has to supervise.  She was out for milking and just decided to hang around and watch.   She like the pigs.

I think this picture is kind of funny as well.  They were free to go, but were very hesitant.  Pigs like their own area.  But finally, they decided if it was okay, they were going on a little walk about. 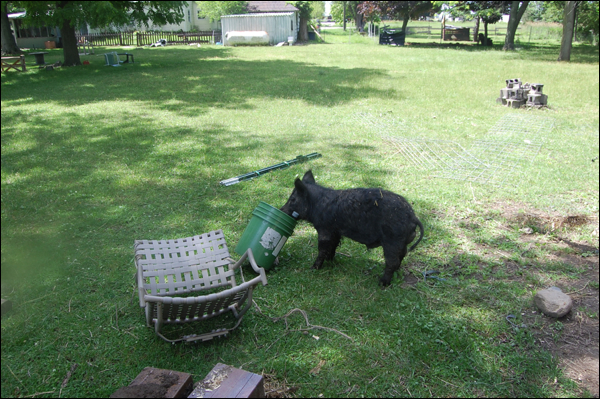 Onyx was the first to get into trouble.   He thinks all five gallon buckets are food.

Miss Ebony had a plan and took off for the paddock.  I guess she wanted to visit. 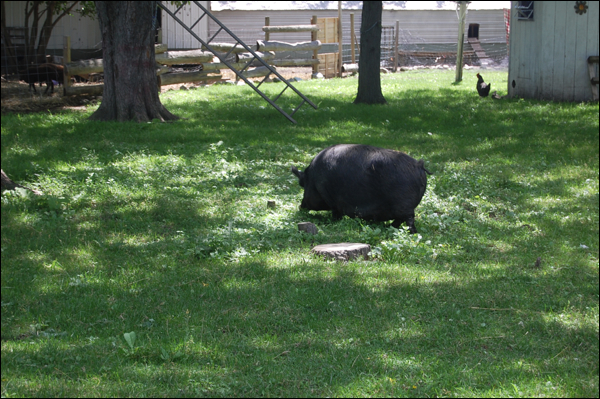 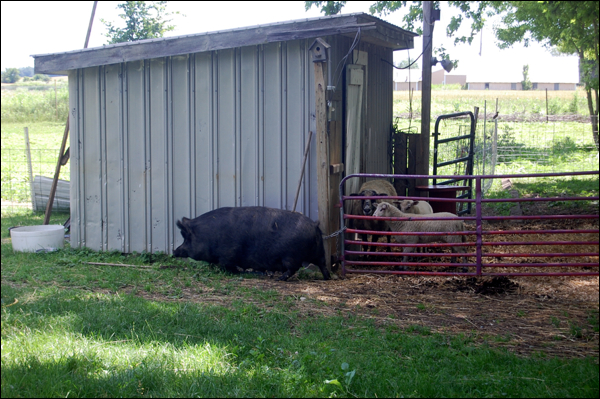 Bonnie and her lambs are so funny…  the little ones were so surprised!   What is that??? 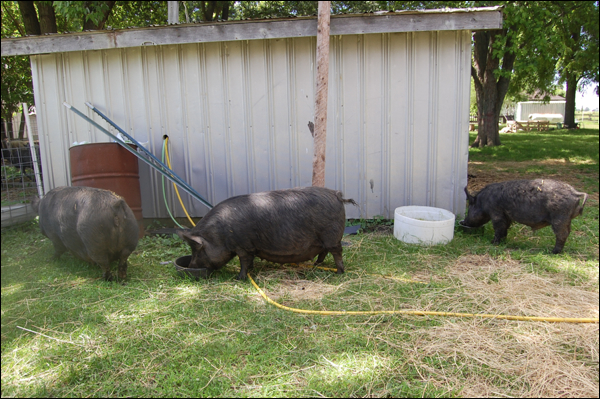 You can see the middle hog, that is Cheyenne….  she is still waiting on her litter of piggies.  Soon, I would think…  soon!  I think she is waiting for the new remodel of her house…

Buttercup finds their muddy wallow to be very gross.  Of course, that doesn’t stop her from exploring and checking the place for left over snacks.  You just never know. 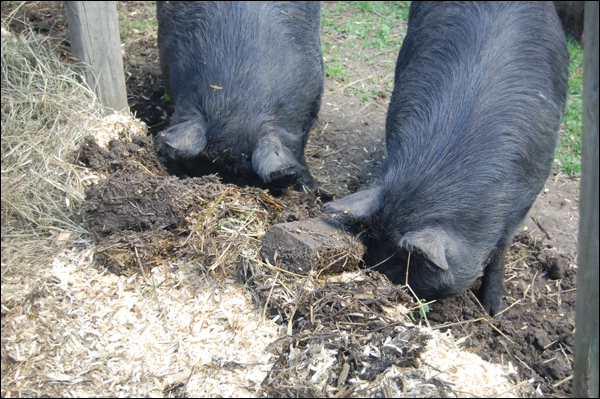 The girls returned to help turn over some dirt and dig for earthworms and grubs.   They love them both!   They are like little high powered backhoes…  grass does not last long around them. 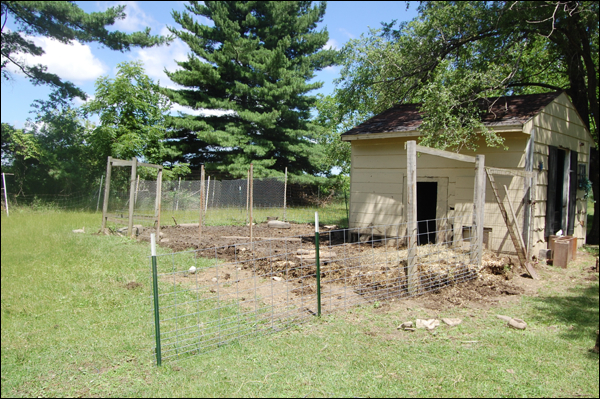 The first panels are up!  Yah!   Actually, it did not take too long.  The ground is very damp from all the rain we have been having, so the posts went in very easily.  And the sixteen foot long panels make easy work to the fencing.

Maggie went and got a bucket of sweetfeed to lure the hogs back when we were just about done paneling.  Another funny picture… Ebony has missed the turn.   Don’t worry, she stopped and corrected her flight plan once she realized she had missed her exit.  They really love sweet feed and would follow Maggie just about anywhere for it. 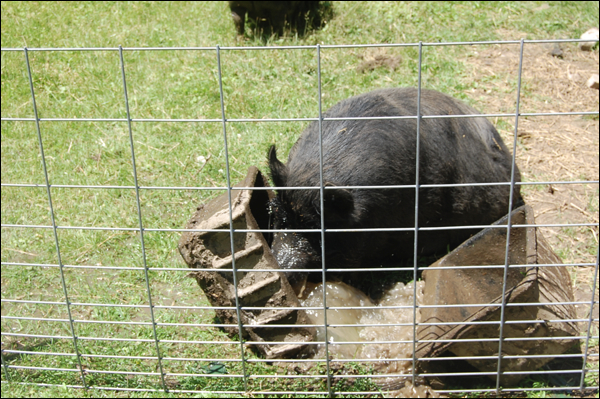 Ebony loves to make a mess out of her water buckets.  We have a big fifty five gallon barrel that we installed a drinking spigot on, but it has been leaking.  Maggie is going to try and fix it because that is much better for the hogs.  Lasts longer.   With Ebony around, water in a bucket lasts about 10 minutes, max.   Because she loves to play in mud.  She is a pig, after all. 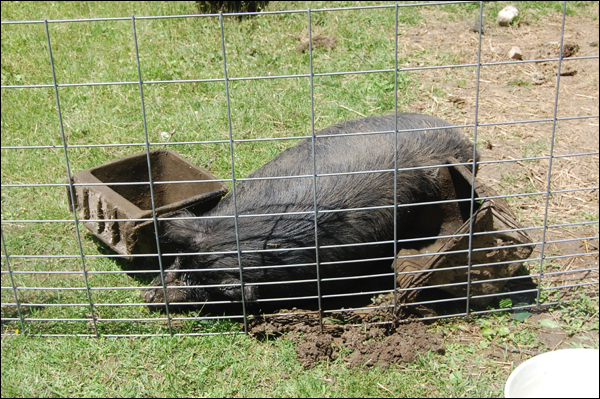 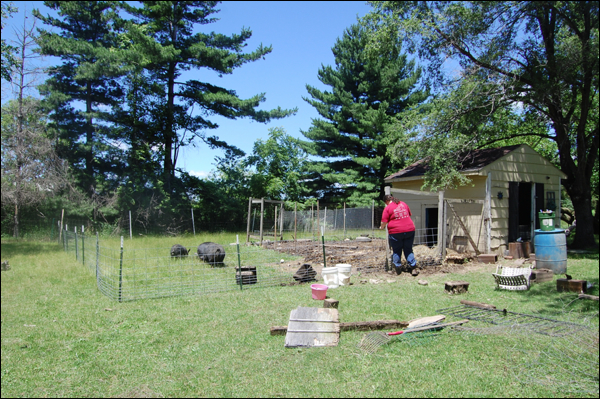 We still have to do a little clean up and just make it all nice and pretty, but for now, the hard part is done.  And the pigs are very very happy.   Of course, they will root up all this grass in no time…  I bet by this time next week, it’s all dirt.  But, that’s the way they like it, so who’s to say its a bad thing?

I’m just happy that they have a lot more space and can wander about a bit, enjoying more of their lovely yard.  And as the babies grow up a bit more, they can enjoy the space as well.   Maggie is making them a little sun shade building to put out in the middle of the yard for them.  Something they can make a nice wallow under and lay in the shade.   It’s sunny there for most of the day, but in the late afternoon, the tall pines do give them a nice shady place.   But I’m sure they wouldn’t mind something for early in the day.   And they shall get it!

Happy happy hogs is our goal.  And I think we’ve achieved it. 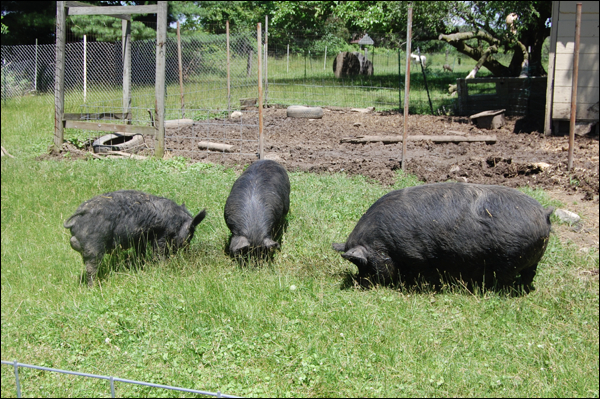