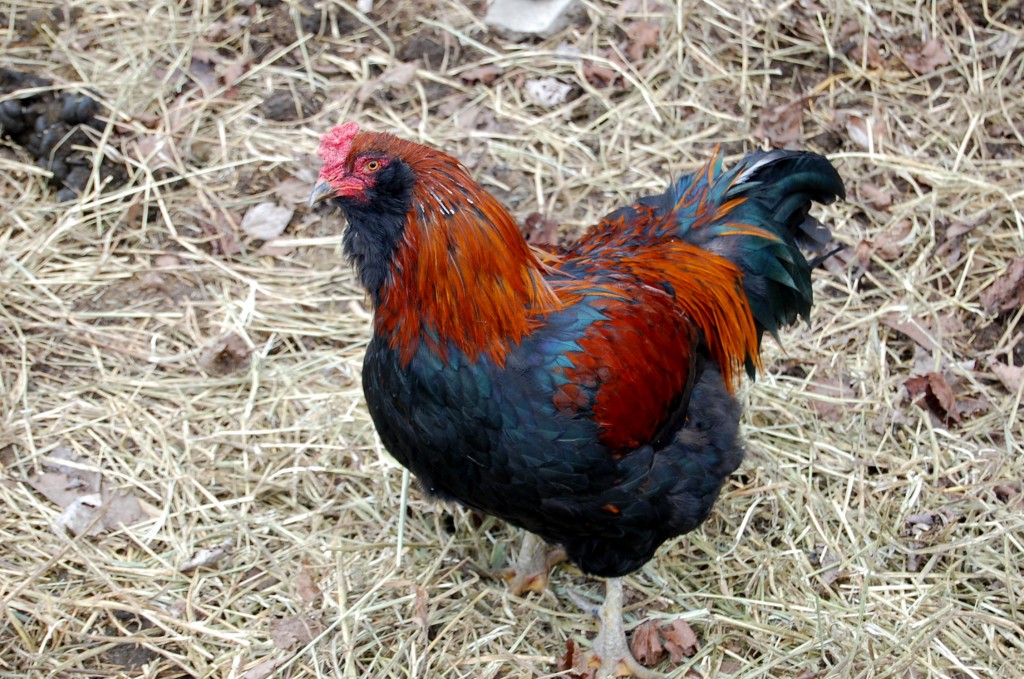 Meet Raven…  he’s a lovely Windhaven Maranucana rooster, and he’s about 3 years old now.  His mother was a Amerucana and his dad was our Bucka Roo, a French Blue Copper Maran.

He was born in the late winter before we knew that chicks hatched inside, late in the year, don’t usually have a very good success rate.   So he and a few of his mates made it and we raised them in a heated little brooder box on our screen porch.   They got a lot of attention and handling, so that made them all very tame.  The girls went on to new homes, and Raven, well, he went to a new home as well, because at that time, we thought he was a girl!  He was mostly jet black, with these beautiful feathers that gave him the glow of a lovely raven, hence his name.  When his family learned that he was a rooster, reluctantly, he had to come back to the homestead.   I didn’t mind too much, I had actually grown very fond of the fellow.

Raven is a funny roo, he’s really pretty low on the pecking order of free range roosters here, and believe it or not, he prefers to bunk down with the hogs.  They respect each other and he gets a great place to sleep and be safe, as well as much crack corn and lost pig chow to eat!   He is right there in the midst of the feeding whenever we give the hogs their chow!   I’ve warned him that pigs will occasionally make a late night snack out of a chicken, but so far, neither hog nor fowl have done anything to make an end to their relationship.

I noticed that Copper, our first hatched roo son of Bucka Roo, has started to bunk with his half brother, Raven.   Copper is getting older, and less attractive to the ladies of late.   They are much more enamored with the youngsters Dammartin and Bucka Too…   Bucka Roos’s last two sons.  Such is the way with farm studs.  It’s usually a fairly brief time in the limelight of desire.  I’m definately going to gather up spring eggs and raise up some grandsons of Bucka Roo….  he was our first rooster and much loved…   he has offspring all over the area!   So many of his baby eggs were raised by friend’s broody hens that I think a family reunion would be pretty amazing!   And to think he and his ladies were rescued from a Chinese restaurant owner at auction!   Fate stepped in and now we have our famous roosters!  I love that…

Well, Raven is quite the character and still likes to sit on your lap if you can catch him.   He used to come and volunteer to visit, but the years as a free range fellow and being picked on by the other roos, makes him a little less eager to volunteer for attention.   Still, it’s still nice that once caught he will hang out for a good long time, especially if you talk to him and stroke his beautiful colorful neck and back feathers!   He is just amazing in the sunlight…  So beautiful!