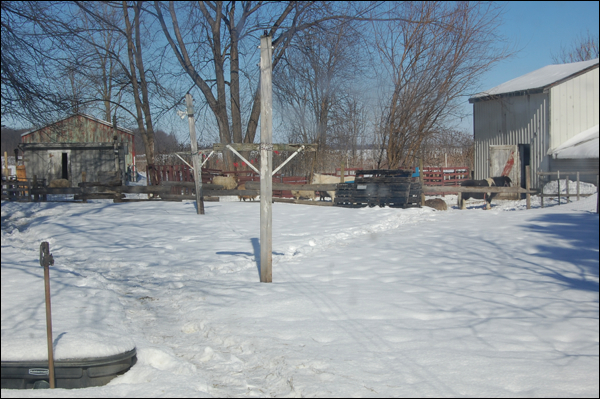 This darn winter has been tough on everyone.   I feel especially bad for the livestock because for their own good, they have been sequested to the barns and the paddock.  It has to be…  we have drifts as high as four feet and up over fences!  It’s taller than all our critters!   The ponies are only three feet MAX at the back!   We would loose them if they got stuck in a drift!

Well, they are probably smart enough to not do that, however, it’s just safer to have them locked up.  The goats don’t mind at all.  They like having the warm big barn and breakfast, lunch and dinner served to them while they lounge under the heat lamp.  I think it will be hard to get them to leave once the weather gets a bit nicer.

But the ponies and sheep have two buildings to share, the little ram shack and the larger pony barn.  (You know, we call that the pony barn or the sheep barn or the whole thing is the poultry barn!  Crazy…  we always know what we’re talking about, but I suppose it might be confusing.  I think I like pony barn, because well, it sounds like we have a lot of ponies and ponies are so darn cute!!!)

And there is a paddock in between the two buildings for them to enjoy.  It’s a pretty good sized space, a fenced in sort of small yard for them to be able to go out and walk around and just sort of mill about.  It’s just enough space for the pony boys to rip around, buck and kick and play, which of course, sends the sheep running for the shack!  However, being middle aged boys, their crazy stallions of the moors play time usually only lasts about 10 minutes and they go back to hanging out and waiting for the food lady. 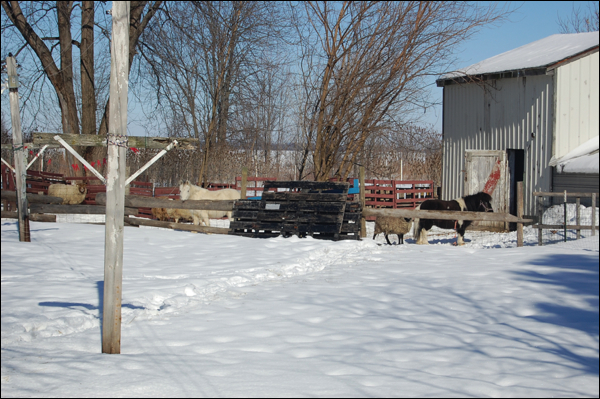 Well, a few mornings ago, the temperatures actually hit 30 degrees!   And it was bright sunshine.  I was washing dishes in the kitchen and I noticed that everyone was out in the paddock, just standing like statues as they soaked up that lovely sunshine.  Both ponies were napping, their little hind legs cocked and their eyes closed.   The sheep were milling about, slowly, some even laying down and just enjoying the sunshine without a single noise.  I thought it was so cool…  and I was so happy for them, it’s just been so tough with all this frigid cold temps and snow, snow, snow!  So I grabbed my camera and quietly tried to sneak out to snap a picture!  (We really need to get a remote camera for out there…  haha… to catch some fun shots of things going on…)

Well, I got one shot before they heard me and woke up to stare at the screen porch.  They know that the sound of the door means one thing…. LUNCH!!!!   I guess I need a super telephoto lens for my camera!!!  Well, it might be awhile before that happens… but in the meanwhile, I guess you’ll just have to take my word for it.  My sunbathing beauties were out in full force that morning!!!