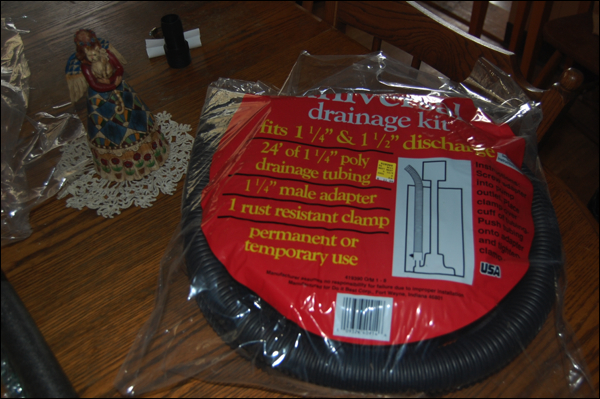 With that first harsh storm of the year, brought a few tough days here at the little homestead.  Our pump froze up for three days and so we had to go and fetch water from the local spring.  We did have about 50 gallons stored, so it was only one trip extra on the last day, but still, kind of a pain to have to wash up and water livestock from containers.  Thankfully it was just a few days and we were somewhat ready for the possibility.

However, we didn’t think about our sump pump outtake line freezing!  Oh no…  next thing you know, the pump was trying to run and couldn’t, so we had to shut it off to avoid burning out the motor.  And then, of course, the basement began to fill up with ground water.  We’re in a sort of low laying area, so our sump runs often, even in the cold.  Our friends Justin and Steve came out one day and we hooked up some hoses to try and empty it but it wasn’t a permanent fix.  It began to flood again.

So I went to the local hardware and found that they have these temporary hose kits and they were very reasonable, under $12.  The fellow said that even though it says permanent use, he wouldn’t recommend it since it’s not that sturdy a hose and all, but for emergencies, they were awesome!  So I got a kit and we got started. 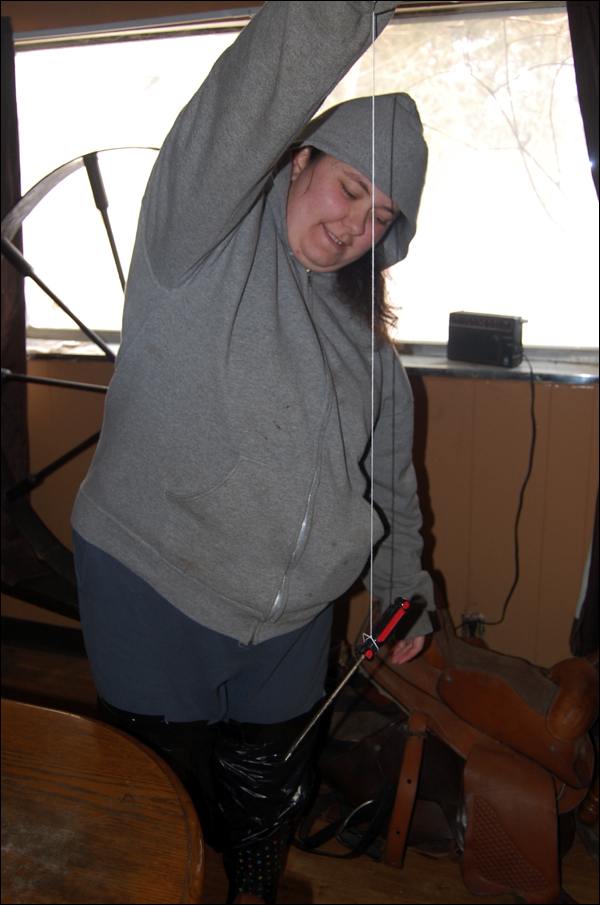 The weather had warmed up somewhat, and Jessy volunteered to go down and see if she plugged in the pump, if it would start working.  The water was way up over her muck boots, so she got very wet the first time.  And it’s freezing cold water.  To top it off, she dropped her screwdriver in the cold water and couldn’t find it.  Needless to say, the pump ran but nothing came out.   Drats.   So, after I got the emergency drain kit, she was ready to go down again, only this time, she tied a screwdriver to her wrist so if she dropped it, she would be able to retrieve it!  Smart Girl!

We are not that talented at DIY stuff, but buddy, we learn fast.  Make a mistake and we tried hard to learn not to do it again.   And this time, we used a couple trash bags and duct taped them to her old sweats to make a pair of hillbilly waders!   Hey, it’s bad enough that the water is cold, it’s far worse to have it soak your socks and come into direct contact with your skin.   She was ready to go down. 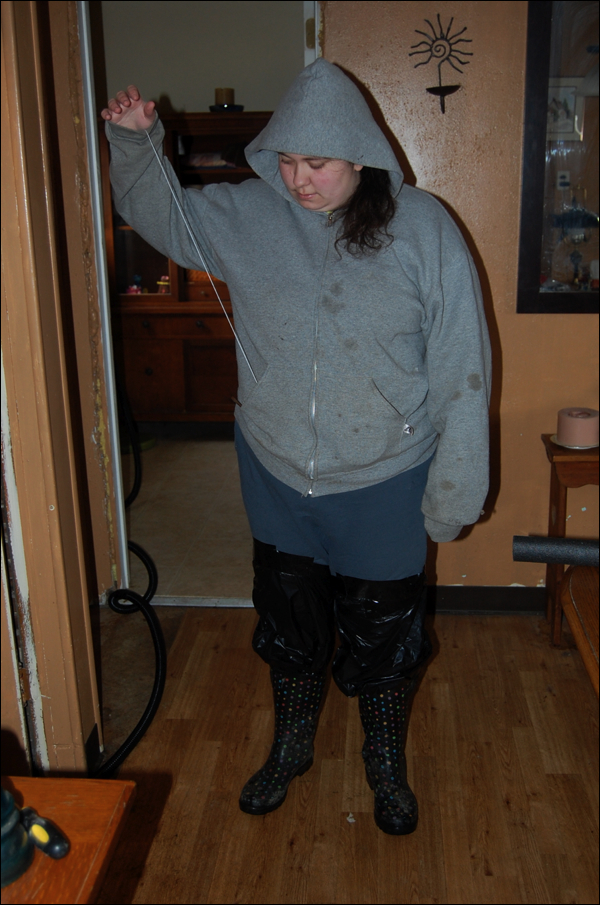 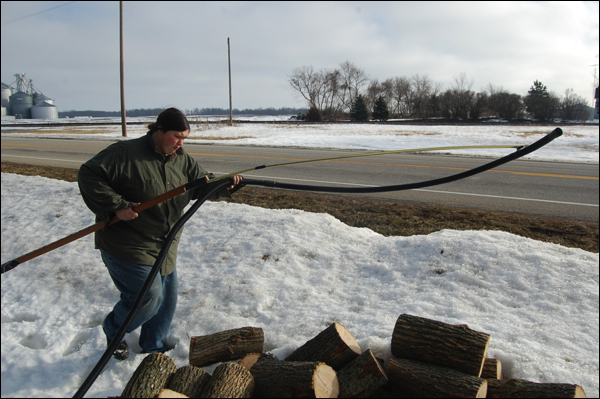 We thought it would be best to try and thread the hose in through an outside access panel, down into the basement to Jessy.   So we taped a couple long things together, Maggie and I and then tried to thread it in through the basement.  However, there is an interior wall and we couldn’t get it in through a small opening into the main section of the basement!  Darn!! 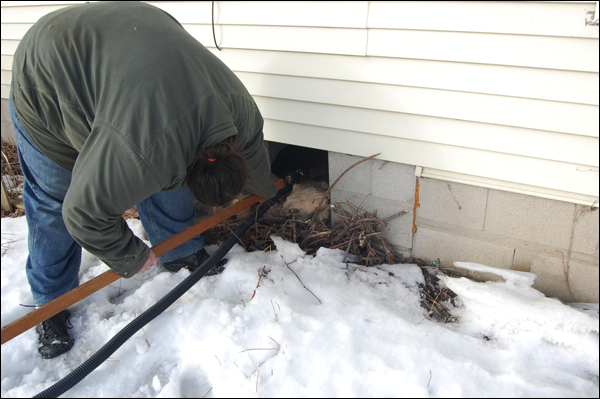 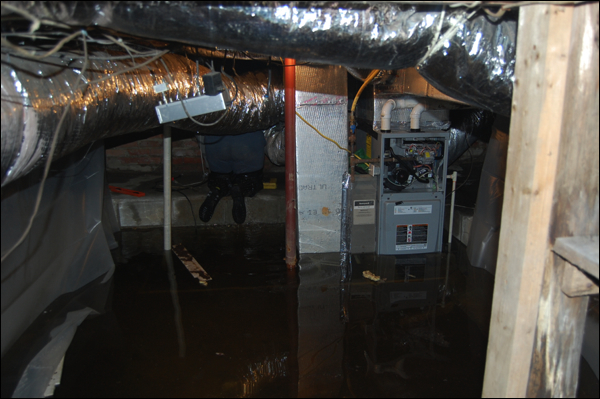 If you could really see into our nasty little old basement, you would see that it is what they call a Michigan basement,  It’s about 15 foot by 10 foot only, and there is a retaining wall up about 3 foot with a crawl space under the house.  It’s weird.  And it’s a gravel/dirt floor.  As you can see, the water was JUST up to our furnace!  Agh!   It’s raised up on cement blocks, 18 inches up.  It was JUST touching the bottom of the case.  Just in the nick of time!  You can see Jessy’s feet as she kneels on the wall, trying to see the hose. 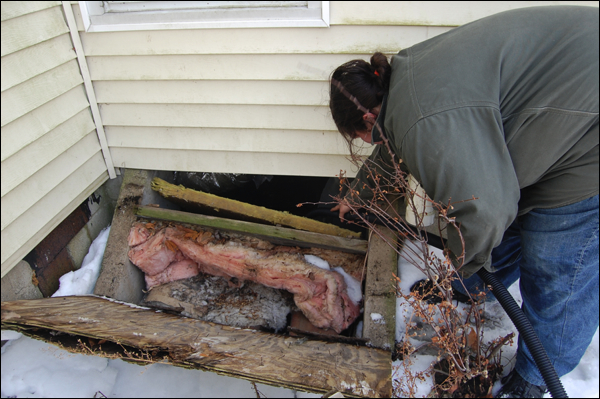 Well, we ended up going around the back of the house where there is a direct access into the basement.  I believe at one point there were storm cellar doors on this area and steps down, but now it’s just filled with insulation and such and capped off.  We were able to thread it in through there and Jessy could actually reach it.  Once she got ahold of it, she could then attach it to the uptake line and get the pump going.   We had enough hose to make it out about 20 feet from the house so that it wouldn’t just pour right back into the basement!  It worked!!!

I’m so proud of my daughters.  Not too many 20 somethings are ready to go wading in ice cold water and work on sump pumps and dig out insulation and such to save their furnace!  And without complaint and cheerful to do so.  I suppose we could have called a plumber, but it would have been easy 200 dollars and who knows how long?  Every plumber and handy man in the area was working overtime with all the storm damage.  And that kind of money is dear to us, and well, we knew that if we couldn’t get it working, that was always an option.

Poor Jessy was a little bit teary when we got done, her feet were so very cold!   But dry and we immediately got that stuff of her and got some warm towels and sat her down by the heater to warm up and rub them better.  I am so proud of these two young ladies!  They are tough girls and not afraid of a little home repair emergency stuff!    Hopefully soon, the main line will unplug, but until then, we have at least a dry basement! 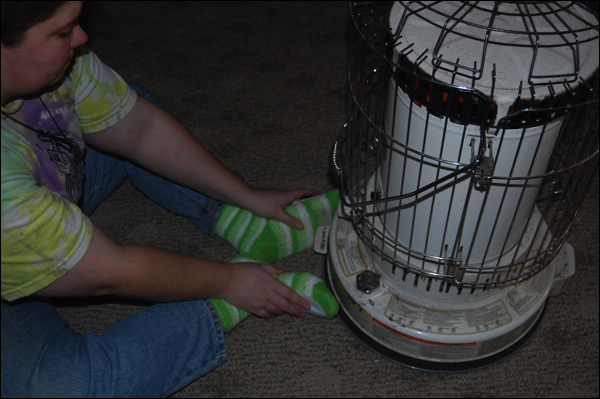