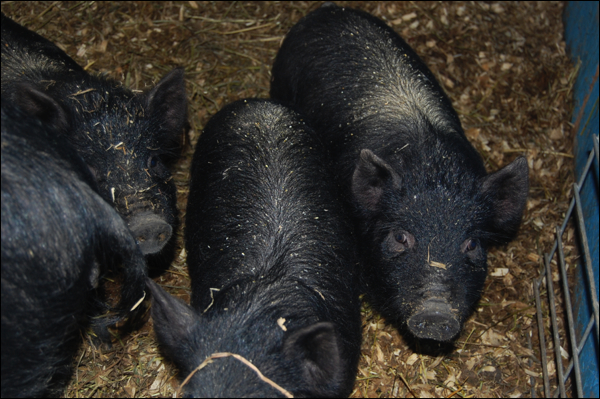 As you might have read, we have ventured into raising these lovely little heritage hogs called American Guinea Hogs.   They are a smaller, lard hog with wonderful temperaments, gourmet meat, smaller meat yield and slow growers.  Our first litter was born in October to our first hog, Ebony.  Since then, she’s doing great and her little piglets are awesome.  We have sold a few and have four piglets left at the moment.  All girls! 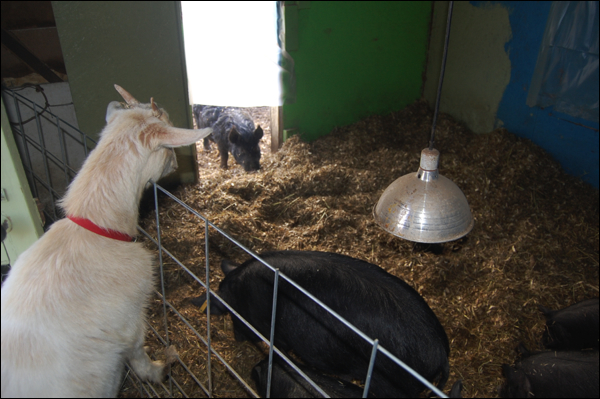 Since we had taken Ebony over to a stud boar to be bred the first time, we knew that we would much rather have our own boar eventually.  However, part of the trouble was finding an unrelated boar!  We shopped around, checked out breeders, pedigrees and all that and finally found Miss Ebony’s dream husband…  who we decided to call Onyx, because it’s a black mineral like Miss Ebony is a black wood.

Maggie and I made the trip down to Dayton to pick up our handsome little devil right around Christmas.  It was a 400 mile round trip and it was a fun, but long day for sure!   We did enjoy it though.  Onyx was born on August 16, 2012, so he is about 18 months old.  Perfect!  Ebony was born in June of 2012, so they are pretty nicely matched in age.  He’s a little smaller than her at the moment, but I’m sure he will make up for it soon enough.   He is a curly coated hog and she is a smooth coat.  Should be interesting to see their first litter.   Little piglets with weird hair! 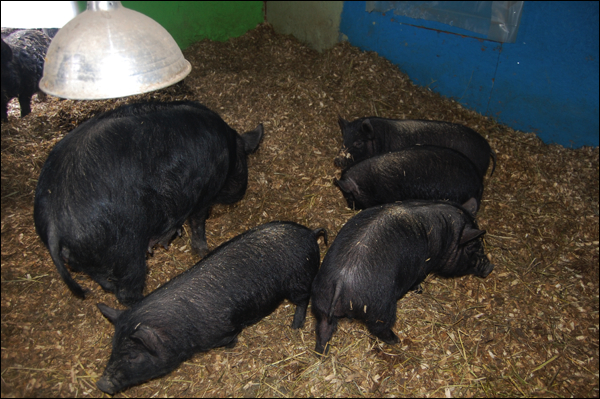 After a two week quarantine time, we introduced them the first of the year.  There was a bad storm coming and we needed to move some animals around, so it seemed like the perfect time to introduce everyone.  At first Ebony ran him out into the yard with a good deal of squealing and grunting…  she was not having this stranger in with her babies! 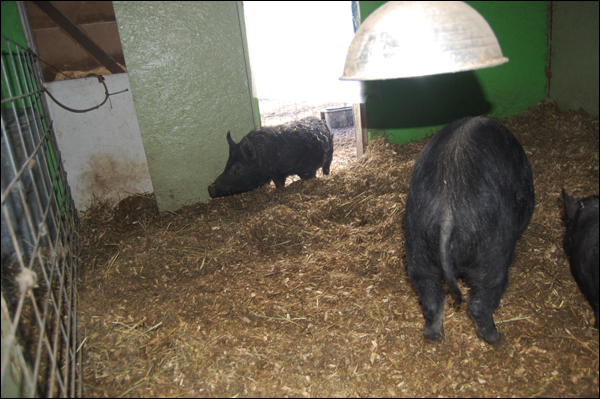 But after a while, she let him come into the house with a very wary eye.  He was super sweet about it all, just sort of making these nice little introduction noises, which were very hesitant and questioning.  “Hey Sweetheart…  nice place you got here, sweet babies, you are so nice, can I just get a little drink?” 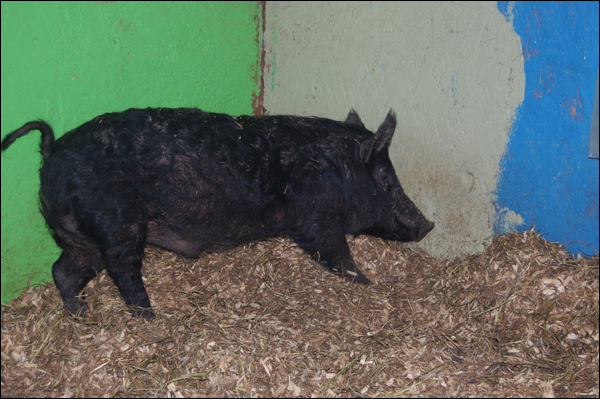 He got into the house and to a corner and proceeded to itch a little on the wall, just sort of nonchalantly checking out the digs. 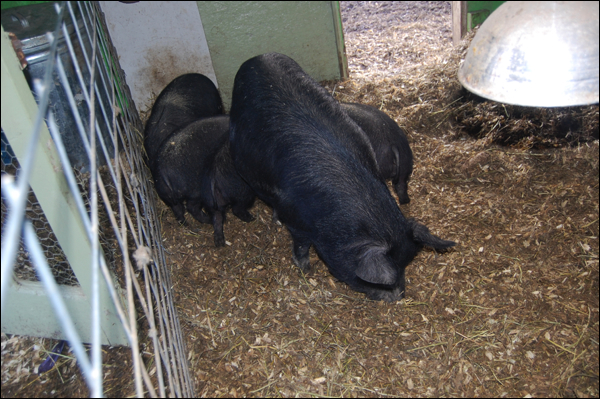 And of course, one little grunt and all the babies were huddled up behind Momma.   They knew better and would not disobey Mom.   Ebony just went about grubbing a bit and looking very unconcerned, but you knew she was watching Mr. Studly with every fiber in her body.   Sows can be VERY protective, even Guinea Hogs. 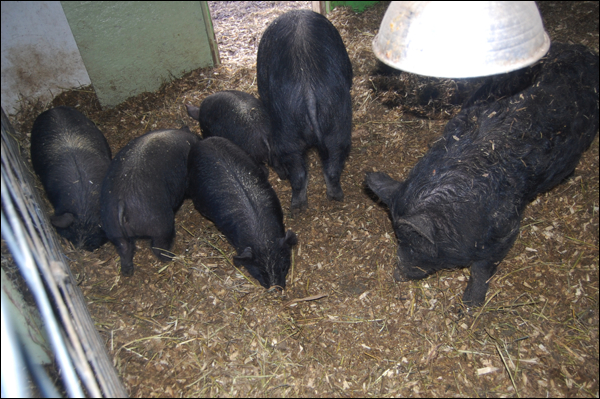 After about a half hour, she was letting him near her babies and had had a few nose to nose sniffs and grunts.  I’m quite sure she was given him HER rules of the roost.  After all, she was the queen and he was just some random prince.  All the little gilts were peeking around Momma, and trying to get a good look at him, and maybe a little sniff.  He was very very polite.  We sprinkled a little corn in their bedding to give them something to do rather than just fixate on the new step dad.   That seemed to help as well. 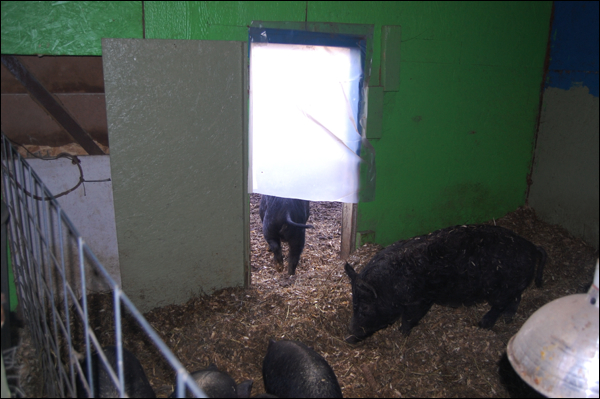 After awhile, Ebony gave one long heavy grunt right at his face and then walked out into the yard.   I’, pretty sure it was “Bother my babies and I will put a world of hurt on your sorry butt…”   To which he make a sweet little grunt and she turned and walked out.  Right away the little girls came over to give him a little check out and there was a good deal of nose touching and sniffing and then everyone was fine!   Yeah!   Our hog family is now complete!  All beautiful, registered, pedigreed and healthy little hoggies!   If all goes well, sometime in April or May we’ll have another litter of piggies!  We’ll know in a while, since hogs look very very pregnant, very quickly.

One of the nicest things about Guinea Hogs is that they do very well in family groups.  We should be able to keep Onyx in with his lady Ebony, even when she has her babies.   Guinea Hog dads co-parent litters, and we’ll see how it all goes.  So far, he’s a sweet boy and loves to be scratched and get goodies.  And he is protective of the girls as well…   just before the storm hit, we were bringing extra bales of straw out for everyone to keep warm in and as we tossed a bale in their house, all the little girls ran and hid right behind Onyx!   And even Ebony joined in, pushing her way behind him!   I thought that was a wonderful thing.   And he was right up front, with a questioning grunt grunt at what was up.   Of course, they have seen straw before, but I think they were just all being silly as animals are often….  playing with the new straw bale in no time flat. 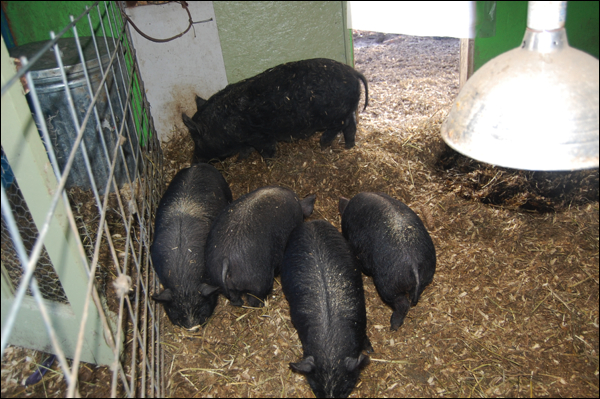 Just so happy!   We’ve got our little breeding pair, and with our goat buck, Dreamy, we’ve got that whole goat reproduction area assigned…  and a nice pair of rams…  we’ve got reproduction on the homestead down!  Yeah spring babies!!!!   Can’t wait…