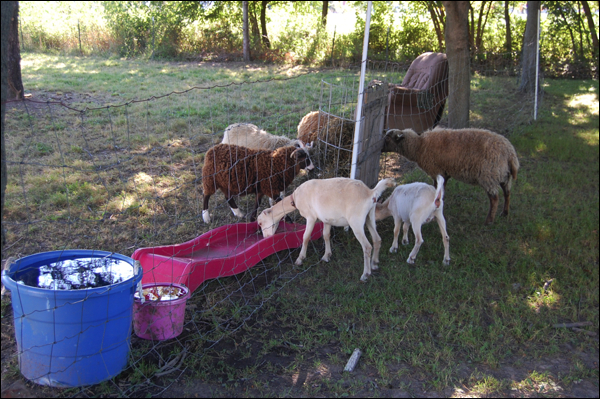 Winter is coming…   yep, there is no doubt… this odd summer is coming to a close.  I’m just super thankful that we made it through nearly to September before we had to start feeding a little supplemental hay to the flock.  That really saves us a lot of money!

Only thing, we didn’t really have a hay feeder for the ram boys!

Sure we had their little red slide, but I use that more for grain or treats now and then.   Works great and it was a freebie from the trash.  What I like best is that the rain gently runs off it so I don’t have to worry about it making a mess or getting their grain soggy.

Right now, they only get a cup or two of sweet feed, once or twice a week.   It’s really more of a “good boy” treat and they sure do love it.  Pretty soon we will start to flush the sheep and goats…  it’s called flushing but really what you do is just up their calorie intake for about 4 to 6 weeks before breeding season!  The idea is that you sort of prime the pump for the fall breeding season, when normally, there would be a flush of good and bountiful food.  Seems to work.  We’ll start our serious flush about the end of September.   We are planning for breeding to take place in November.  So we have late April to May babies!  (Yeah, no snow!!!)

(If you’re wondering why the rams have two water buckets…  Travis is not tall enough to reach into the big boy water bucket if it gets a little low!  So he has the short pink bucket to make sure he gets plenty to drink.  We try and fill it up every day, but still, just don’t want him to go without!  Once he gets a little taller, we will probably take it out.  I don’t like buckets around horned creatures…  they get them stuck!!!) 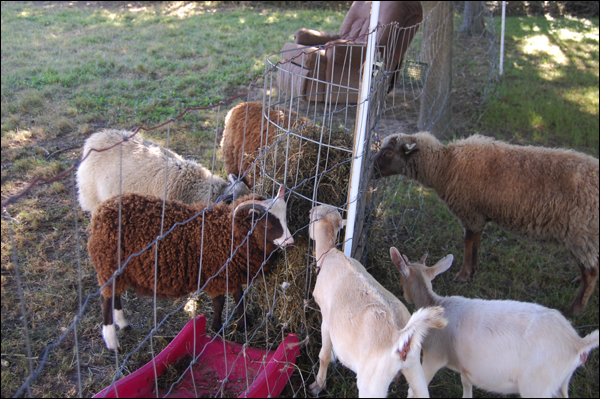 But, unfortunately, the pastures are getting a little burned out from grazing and lack of rain lately.  We’ve had a wee bit, but not enough to keep up and keep the grass growing.  We’re hoping to have that weed pasture safe and fenced in within a week or so… just waiting on the weather to break a bit and for the budget to allow us the extra supplies.  (And I went and hurt my back moving a piece of furniture… durn it…  so I’m not quite ready to be pounding in fence posts right away.  Maybe in a few more days….)

However, we needed to get a little feeder built for the boys.   Sure, we could just lay it on the ground and all, but sheep and goats are picky and messy at the same time.   Once they scatter their hay about, they don’t like to eat it.  And even though hay is getting a lot cheaper with all the good weather we had up until last week, it’s still $5 a bale from the feed store, and I’d rather they not waste any of it, thank you!

When we added that extra pig stall in the big barn, we had a piece of hog panel left over.  It was just a little over three and half feet long.  Four feet high!  So I got the idea… let’s use that! 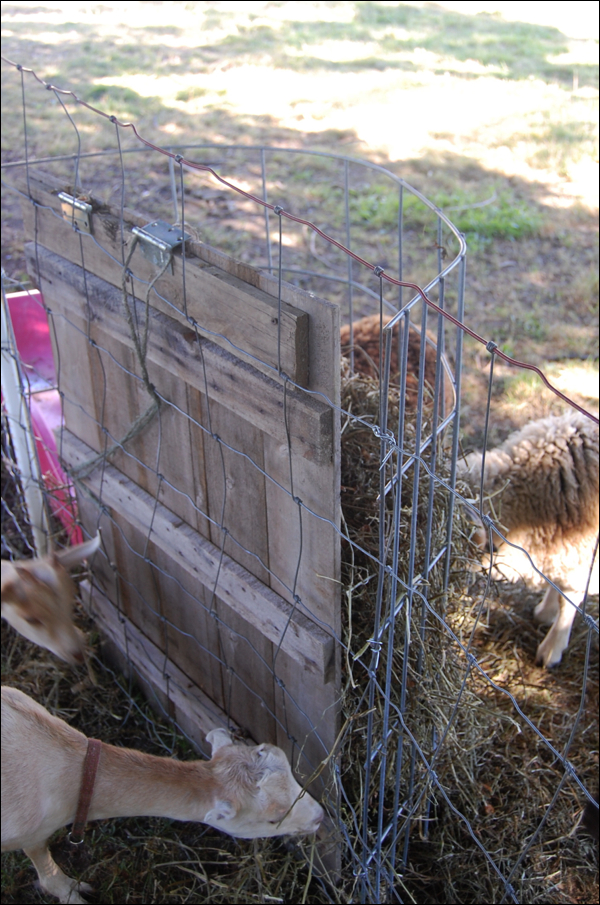 One we had the shape, we just wired it to the existing fence, under a shady maple to keep it from any light rain that might make it less than desirable.  We had this old wooden top to a shipping crate that we slipped in the back to sort of prevent too much filching from the girls on the other side.  Of course, that being said, the hay is apparently greener on the the other side and the ladies did enjoy having lunch with their studlly boyfriends. 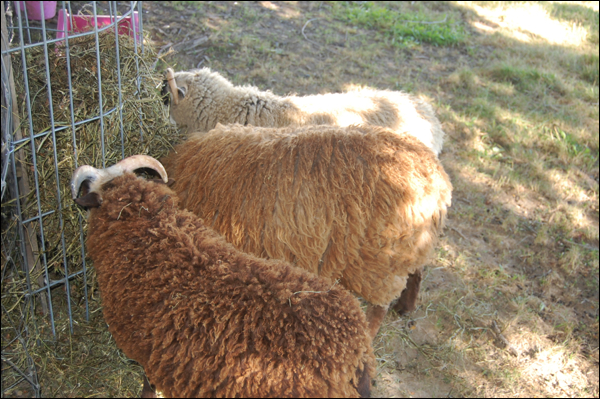 Actually, Travis is a whether… but we just call him a ram so he feels like part of the gang.  (shhhh)

Aren’t they pretty though?  A dark brown, a golden brown and a white cream!

They are getting along so nicely in their little tucked away man paddock! 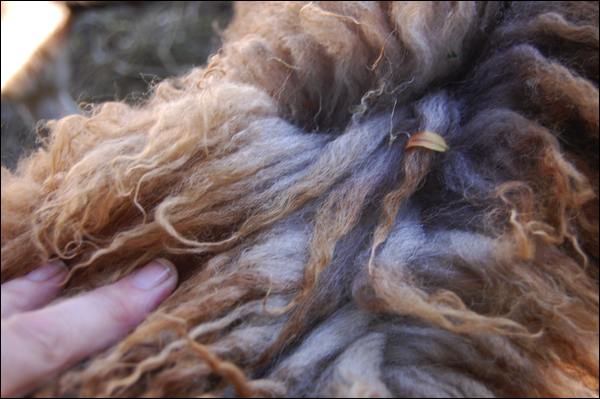 This picture doesn’t quite do justice to Harley’s beautiful golden brown fleece.   It’s just beautiful…  golden brown on the ends and a nice gray heather inside…  It will be curious to see if he keeps this golden brown hue next year or if he matures into some other variation!  He was dark brown as a lamb!  I love Shetlands… they are always sort of evolving… 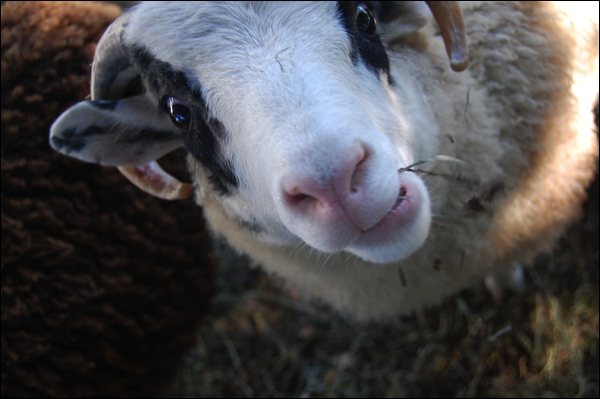 Otis is such a sweetie…  he’s our other spring ram.  He’s unrelated to our flock so we hope that he will add a little diversity as well as prevent Harley from breeding his mother and sister.  I’m not totally sure which other ewe will be in his harem… but I think it might be Bridget, because she has some markings and such like Otis and a cross between the two might really make for some splashy spotted babies!   Wouldn’t that be fun! 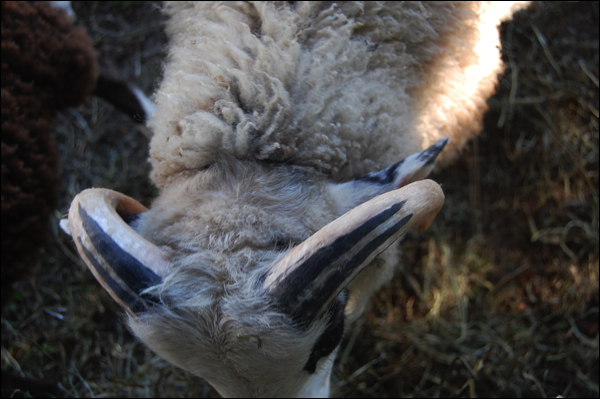 I love how Otis has striped horns!   I wonder if they will stay that way!  Travis has two toned horns as well.  Of course, his have red paint on them as well, from the daily “I can smack the wall of the hut harder than you can” contest that they ram boys like to participate in.  Boys…  shesh….

Travis, being the youngest, seems to have the most to prove.  He’s a tough little nugget for sure! 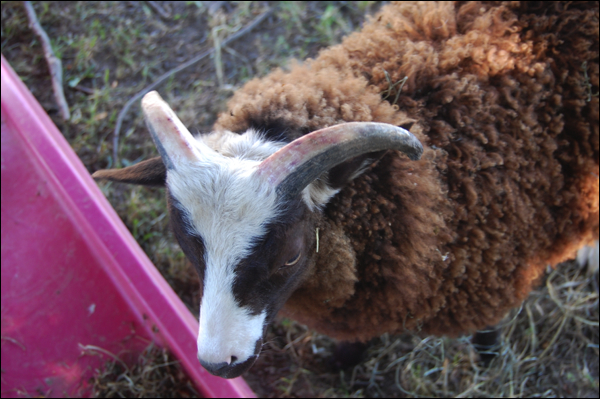 Out in the big middle yard, we’ve started to give the rest of the flock a wee bit of hay as well.  Just a flake or two each day.  Sort of a treat, and also to just fill them up a bit, take a little pressure off the pastures.  It’s kind of funny to watch them… the older sheep and Cody, they love hay.  Especially this hay, it’s beautiful.  Smells lovely.  Full of clover and flowers and just really nice, green and dense.  I think a bale must weight close to 80 pounds!  It’s super heavy!  Once we gave them a bit from the first bale, my gosh, you would have though we were handing out livestock crack!   They pranced, they pushed, they gobbled it up in NO TIME FLAT!  Our pasture doesn’t have a lot of clover and boy, that really makes the deal.

But the youngsters…  mostly Beulah and Emma and the goatie girls… they were puzzled over this dried dead grass stuff.  They sniffed and were puzzled.    They really haven’t had any hay in their whole lives!  Not yet.  You could see that they were intrigued by the elders all tuckering in and being goofs, but each little nibble they took, they acted like it was something awful.  I even saw Emma take a mouthful, munch and then drop it like a toddler eating a new veggie.  YUCK!

They left to go hang out in their teen girl gang at the edge of the flock, eating grass and calling to their  older friends to come and join them with REAL FOOD…  and no one did.

Finally, the stress of flock separation got the best of them and by evening, when we gave another flake, they were right in there eating away.  I guess herd pressure is a big deal for sheep!   Even the goaties were in the mix, nibbling away and nodding, remarking how nice and fresh the stuff was to their friends.  Haha… silly animals.

I guess this is a good reminder that you can do things on a shoestring and have them work out pretty well.  Of course, it’s only been a few days of using the new hay feeder, but so far, so good.  No one has knocked it down or bent it or got caught.  The hay gets eaten completely, and we don’t have this huge mess all around it, yet.  I know eventually, the rams will make a little ring around it, because they like to pulled a mouthful out and chew, and often are quite sloppy about it all.  Still, way better than if we just ground fed.  Sheep and goat can easily be ground fed hay, but ponies and horses can colic if you do that in a rocky or sandy area.  Since the larger flock has a great hay feeder that we built last year, they get their breakfast out there.  Eventually, when it’s snowing and all, they will be locked up in the paddock a lot more and that feeder will be their main source of food.

But for now… it’s just fun and supplemental feeding now…  for another month or so…   and we love our pretty much free feeder!  I guess in reality it cost us about 1/4 of a hog panel…  so, about $5. Not too shabby!  I love hog panels…  I wish we could get about 20 of them dropped off at the farm!  I would use them for all sorts of wonderful things!  Until then, we just occasionally get one or two from the tractor store and trot them home!  Wonderful things, these welded wire panels over 16 feet long!!!!   Wonderful things…