Precisely, we got a registered, pedigreed American Guinea Hog Gilt named Ebony.  She is going to be one year old in June and we hope that she will be bringing new little piglets into the world in about four months or so, if all goes well!

You might wonder…. what is a American Guinea Hog?  Where did we get her?  Why haven’t you talked about her?  Why is she so darn cute? 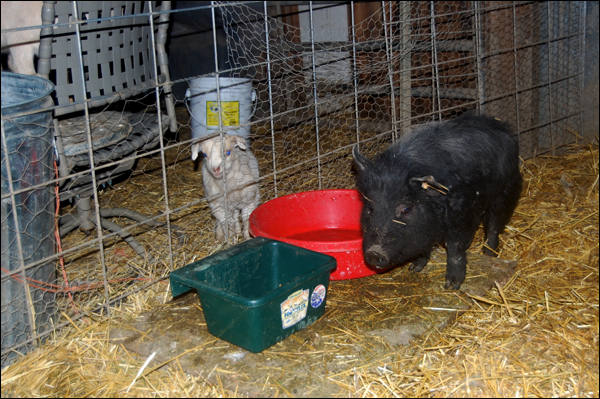 American Guinea Hogs are a smaller heritage breed of hog that is often called a homestead hog.  They are one of the few true bred hogs in America, and were often used in the south by small farmers and plantations as yard pigs.  They are part of the foundation stock of Kune Kune pigs and Black Hogs as well.  The American Livestock Conservatory lists the American Guinea Hog as endangered as in 2004 there were only 400 or so registered animals.  Now, the numbers are improving and I believe not too long ago it was about 2,000 registered animals.

Guinea Hogs are a slow growing hog that tends a little more towards the lard side, as opposed to being super lean.  It takes about a year to 18 months to get a hog to market weight.  They top out at about 250 pounds for boars and 170-180 for sows. They are considered a more gourmet cut of pork, with a very good taste and good carcass.  They eat just about anything and love hay and grass pasture.  Super easy keepers.  They co-family their litters and have just wonderful temperaments.  Ebony took a little while to cozy up to us, but now, she’s just a happy little gilt who acts a teeny bit like a dog or something.  She’s still a hog, and still hard to wrangle without a little food treat and a prayer!  But she does love her rubbies!

I had read about Guinea hogs many years ago and looked into them when we first got the farm.  But most were either way too expensive, or too far away or just not available.  One farm in Indiana had some and I remember emailing back and forth but in our final, let’s talk cost, email, the price for a boar and sow breeding pair was $1500!  Yikes!  Not in our budget for sure.

Well, that being said, I still love the idea of these little hogs.  The origin of this “yard hog” was that you pretty much just let them roam around your homestead, foraging and eating snakes and such, scraps from the garden and whatever hay and weeds and such that they could find.  They would breed two litters a year and when you needed a little pork, you just went out and grabbed one and poof!  Pork!  Since it wasn’t like a huge commercial hog, that would be a lot of meat to deal with, you could easily have a few meals, can or salt some and trade some out of a finished hog.  They were a reasonable size.  And best part?  They were of good temperament so that you didn’t mind them being loose and around the farm.  The children and chickens were safe around the American Guinea Hog.

When we raised our hogs last year, I have to tell you, they would not care what got in their pen, they would eat it, given a chance.  We lost two turkey poults and a young hen to them.  I feared for Maggie at times!  Haha… however, they loved her…  still 1,000 pounds of hog in a small area is a lot of pushing and shoving.  There are many tales of farmers slipping and falling in the pig pen and the hogs do them in.  Why do you think, in the original Wizard of Oz movie, the farm hands were SO worried that Dorothy might fall in the hog pen?  Hmmm…… 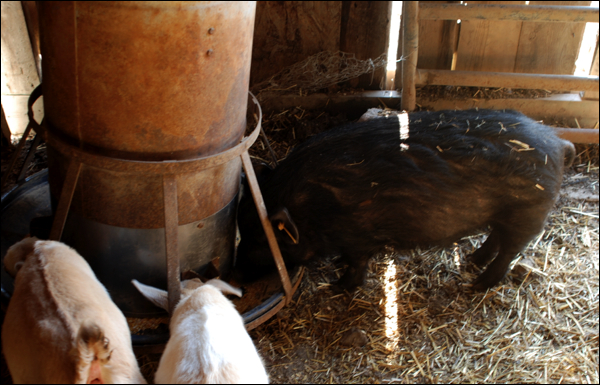 Not Ebony…  she’s quite friendly and tolerant of other critters.  In fact, the goatie girls often sneak in and steal her chow and Ebby just grunts and moves over. She’s quite polite for a hog.

Once she farrows a litter, she might be a little more protective of her brood, but even then I’ve heard they are very nice moms and tolerant of human intervention and attention.  It’s part of the charm of these hogs.

So… how did we get this lovely little porker?  It all happened on Facebook!

I started a local homesteading clan about a year ago on Facebook.  I kind of thought we were the only weirdos that loved all this stuff.  Turns out I’m quite wrong.   Our group now has over 220 families and a very active group!   You can visit here if you want… just click the link…

It was there that I met Daniel and Kristina.   And they have a delightful little homestead just over the border into Michigan.  And they raise sheep and chickens and goats and are into fiber arts and all sorts of similar things.   And they raise American Guinea Hogs!  And they had a couple for sale!!!

Well, we all got to talking and the next thing you know, I’m trading 7 fleeces, a hand crank grain mill, a juicer and a pasta machine for a pig!!!   How cool is that?  And with a dance card ticket for one free love fest with their boar coming up this month in June!!!

I love that she rode in the back of their sedan car.   My kind of people!!!

Wow, she has grown in the last 6 weeks or so… I hadn’t noticed as much until I saw that picture!  Kristina said that they really get this sort of growth spurt at 12 months…  they seem little until all the sudden, they are much bigger.  And you don’t notice right away!

One of the things that we plan for our little piggery is to have them outside and pastured as much as possible.  With traditional hogs, that is hard without electric fencing and a good deal of room.  But with Guinea Hogs, they are really pretty fun to have about and loose.  Granted, Ebony can get into trouble pretty quick, even though she’s small, she’s strong and she has figgered out how to get under chicken coop fences pretty easily!   I think I see a nice little hog panel paddock for her and her children in the near future!  (part of that lessons learned post of earlier today….)  Still, it’s neat to know that we don’t have to run in terror if the pigs get out!  In fact, we can enjoy them on a nice spring day!

Our plans at the moment are as follows…

We are taking Ebony back to Kristina and Daniels farm next week where she will stay about 30 to 60 days depending on how well everything goes with the breeding.  Pigs cycle about 21 days, and if she’s receptive, then she’ll be home sooner!

Once we get a good breeding date, their gestation is 3 months, 3 weeks and 3 days!   Pretty cool, eh?  So we might be looking at piglets in the late summer, September or October.  She will overwinter in the big barn with her litter which should be around 5 to 8 piggies.

Our plan is to keep a daughter for breeding, to possibly trade a piglet or two for an unrelated young boar and then raise a couple for our own meat needs and sell a few.  Okay, so we’re hoping for 8 piggies!  We are optimistic you know.

Now, one might wonder… why would you eat an endangered farm animal?  Well, they are not really pets.  As much as you might think they look a bit like a pot bellied pig, they are not.  They are hogs and they act like hogs, especially as they get older.  And by selectively marketing some of the animals you  improve the over all breeding pairs available.  We will invite Kristina and Daniel over once the little ones start to grow and hopefully discuss their merits and overall conformation and such to select the best to be breeders or feeders.  If we can’t find another boar to trade, then the sale of a few will help to raise the cash to just outright buy one.

It’s always possible that we can take her back to be bred, but once she gets to be 150 or 180 pounds, it’s just a lot of stress and harder to do so.  If we had our own little breeding trio, it would be more like a little family group and a lot less stress for everyone involved. 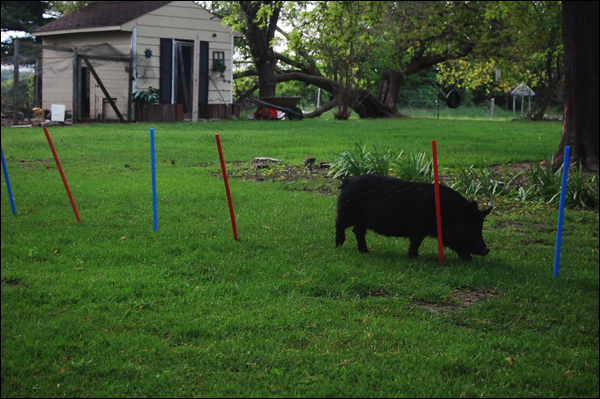 Naw…  she’s not very good at livestock agility….  she tries though.

We’re just delighted to have her here… and feel very blessed to become stewards to help promote and encourage and bring this breed back to small homesteads.   She’s a perfect representative of the smaller, less commercial breeds of livestock that our country was founded on.  She’s slow food for sure.  But she’s going to be awesome in helping to bring more of her kind into the forefront of attention.  I kind of like the fact that commercial breeders think they are non-viable for the consumer food market.  They get to have a real life, enjoy living and grow up happy and content on little homesteads.  They get to be pigs!  Miss Ebony really enjoys her wallow and running about the place when she’s given a hall pass!  And we enjoy her very much…  when you feed her, she’s right at the fence and talks and grunts away.  And she wants her head pat and scratch first.  Then her feed.  And of course, any bad bananas or potato peelings or stale cookies or whatever else you might have.  That is the icing on her cake!!!

Here are a few fun links…

And a nice farm page and information on the key points to the Guinea Hogs!

Oh, and why didn’t I talk about this hog acquisition earlier?  Like when it happened?  Well…  it was right when things started popping at the homestead and it was a crazy time of lambs and spring and chores and such.  And then the big barn where she calls home is dark.  Not exactly the most photogenic…  I wanted to have some nice pictures of her!  I am so excited about this venture of ours, I just wanted to make her introduction something special… with video and pictures and information and links and well…  it’s easy to get sidetracked!  But I am so proud to introduce our little hoggie girl…  Miss Ebony!

In the future, our litters of pigs will be named after American folks, places and icons!  We thought that would be fun…  our first litter shall be either presidents and first ladies or capitals.   We’re still not sure about that.  We’ll let you know in 3 months, 3 weeks and 3 days….